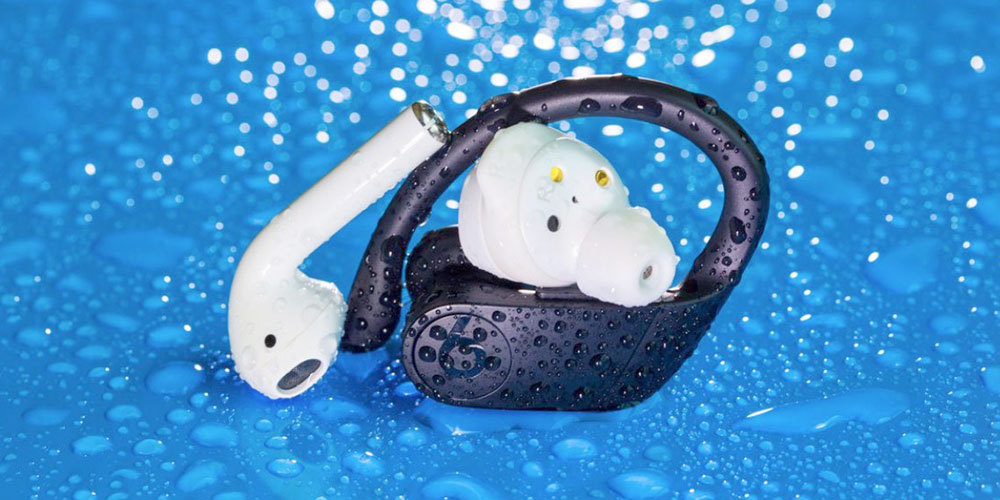 There’s no such thing as fully waterproof true wireless earbuds, but despite AirPods having no water-resistance rating at all, they stood up remarkably well against competing products with official ratings …

IPX2 means that the device is rated to survive drops of water falling on it, with tests carried out in four different positions at angles of up to 15 degrees. This is a basic level of protection from sweat and light rain.

IPX4 is designed to survive full-on splashes of water, such as from a garden water sprinkler. An oscillating spray is used for ten minutes, and a spray nozzle without shield for at least five minutes.

CNET started with a sweat test, which both Beats and Samsung products should pass, but no guarantees with AirPods.

To test the claims, Lexy and I took simulating a sweaty workout at the gym. We wore each pair of earphones and sprayed each other in the face with water until droplets trickled down the sides of our heads.

The site then did what’s recommended in such circumstances: removed and dried them. All three products passed the test without any discernible effect.

Next up was a test well beyond any of the official ratings.

We dunked each pair into a clear fish bowl with a foot of water for five seconds. It’s worth noting that the AirPods went about two seconds over because of bad time-keeping on our part. We just love pushing the AirPods beyond what they are designed to do.

Surprisingly, all three emerged with no impact to either audio quality or microphone performance.

Finally, the headphones were each put through a washing machine cycle. Again, none were rated for anything remotely approaching this treatment.

We took each set of buds out of their cases and zipped them up in a jacket pocket before throwing them into separate washing machines with a few more items that needed washing. All three machines were set on a normal 30-minute cycle with cold water and laundry detergent.

All three suffered in tests conducted half an hour after drying them, but things had improved somewhat after 48 hours. Powerbeats Pro seemed fully-recovered, while Samsung Galaxy Buds were left with one side barely audible. AirPods, though, fared surprisingly well.

The AirPods had a better recovery: both had decent volume, although the music didn’t sound as crisp as before all of our water challenges and the audio clip recorded from the microphone still sounded muffled.

As CNET notes, none of these products are sold as waterproof earbuds, and there’s no telling whether the water damage may cause them to further deteriorate later, so don’t try this at home. All the same, the results may offer some reassurance if you find yourself caught out by a sudden rain shower.