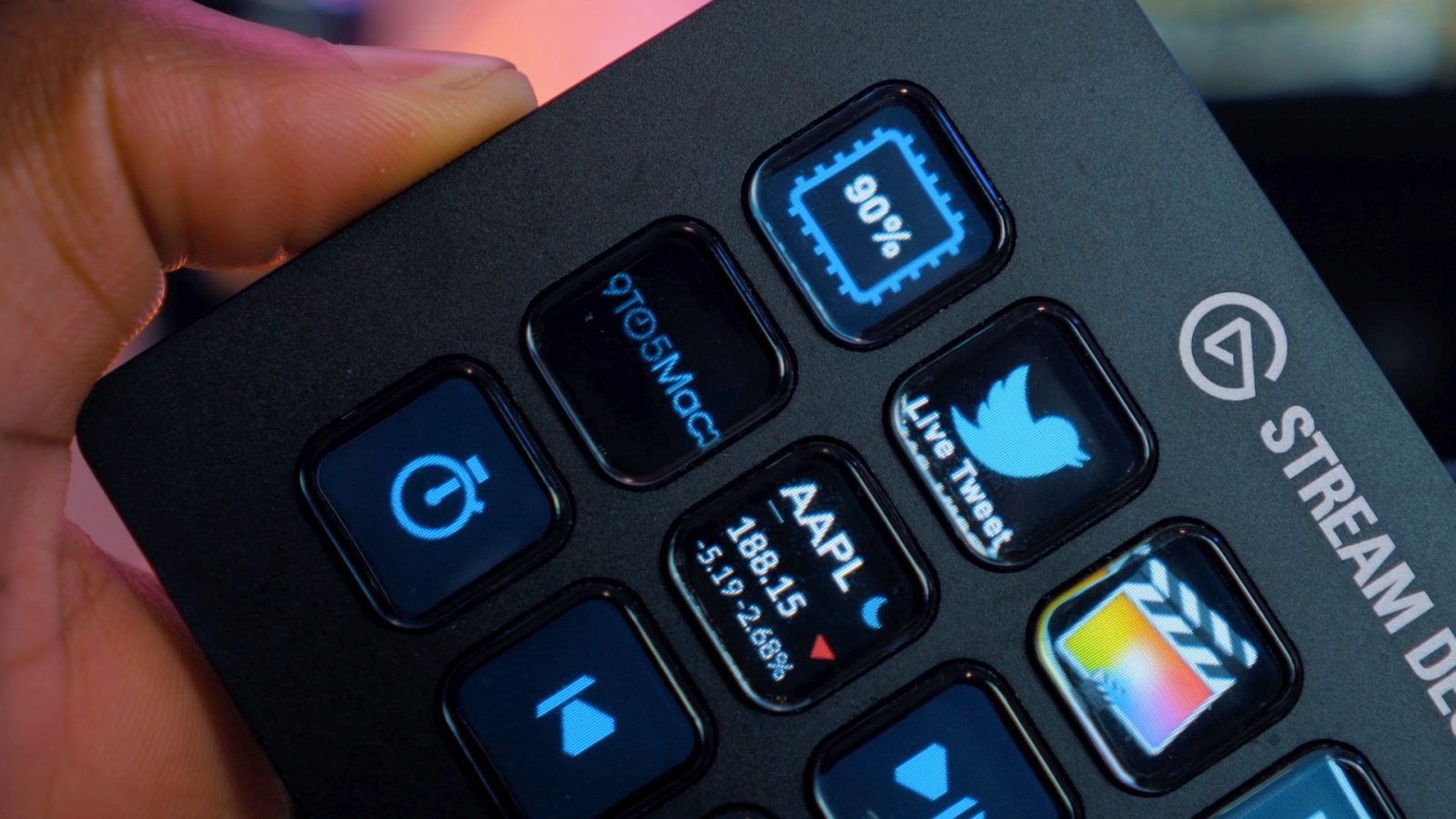 Live Streaming content can require a lot of moving parts and can sometimes be challenging to manage. Elgato had these same concerns and decided to create the Stream Deck.

The Stream Deck is a live content creation controller with 15 customizable LCD keys. These keys are used for creating quick and easy shortcuts to make streaming easier and more efficient. I, however, am not a heavy gamer nor streamer.

Watch our hands-on video for a look at the Stream Deck Controller in action.

The Elgato Stream Deck console itself is only about 3-inches in height and 5-inches in width, so it takes up very little space in a desk setup. There’s also an adjustable stand for those who want to tweak their viewing angle.

The unit sports a matte black plastic build which in my opinion is perfectly acceptable for a device like this. The keys are powered by LCDs, and while you can see individual pixels when looking close, icons and text look okay from a 2- to 4-foot distance from the controller.

The power of the Stream Deck is all in the software. It’s free to download from Elgato’s website and is required to use the device. The software has a similar look and feel of the software included with other similarly-themed Elgato products.

There are a handful of pre-installed shortcuts for the known streaming platforms such as OBS, Streamlabs, Mixer, Twitch, and YouTube. For example, shortcuts for Twitch include playing advertisements, slowing down chat movement, creating clips, etc.

As far as my personal workflow, I’ve settled on a handful of different shortcuts. These include application opening shortcuts, custom text shortcuts, and controlling media playback in applications like iTunes. 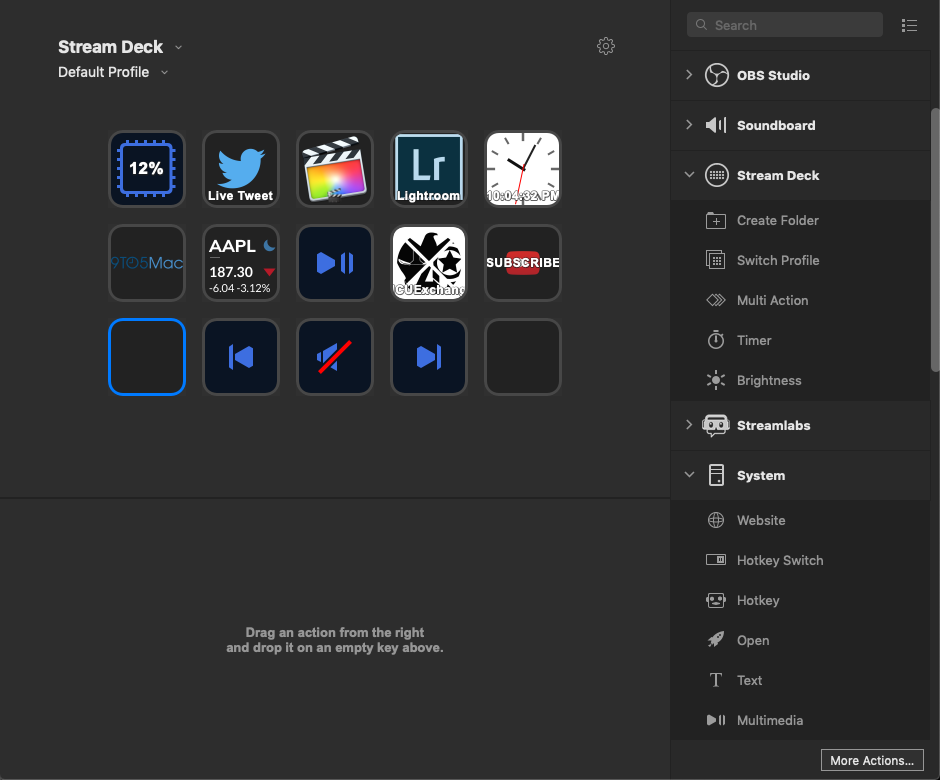 I’ve even set up a custom tweet button, which allows me to input a tweet with custom text and an accompanying image. Overall, the Stream Deck works very well. The software has an instantaneous response to a button press and the buttons even have animations for certain actions. 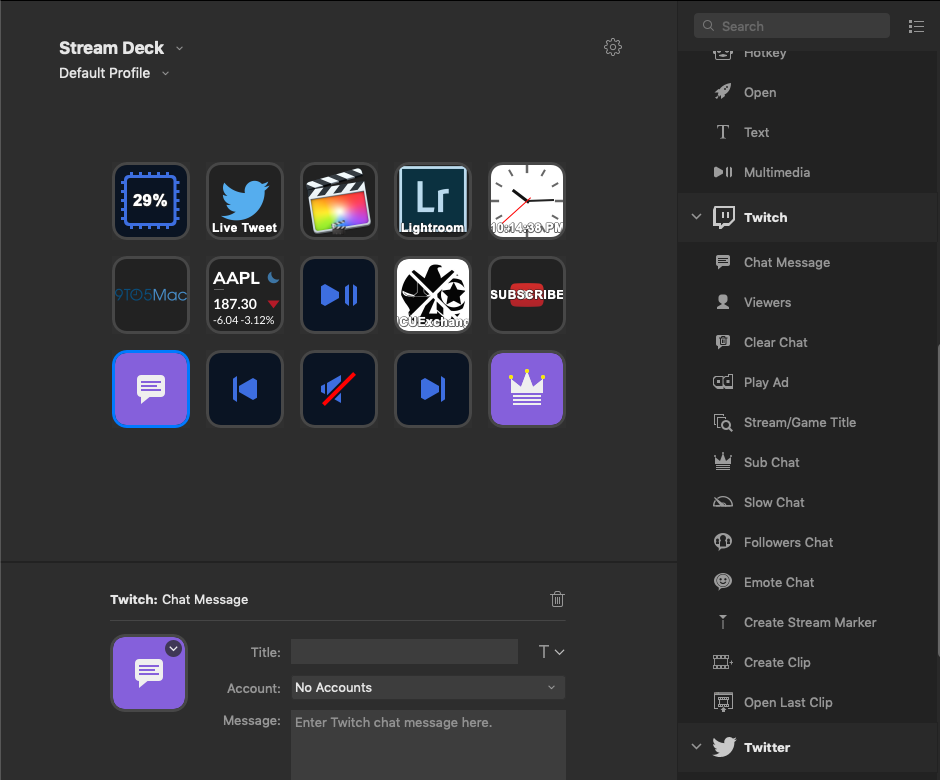 The Elgato Stream Deck is not only a very cool concept, but it’s a concept that was executed with care and attention to detail. The device and software respectively work without any hiccups and provides endless tools for making the lives of professional streamers and gamers a lot easier. Although I myself don’t fall into either category, I’ve found that it adds value to my workflow. For under $150, I can easily recommend it to anyone.

In terms of a next-generation wishlist, there isn’t much that I feel needs to be improved, but with just a couple of changes, the next version of the Stream Deck will be even better.

The first change I’d like to see is a removable cable. I cannot stress enough how important this is for devices over $100. If the non-removable USB cable is broken, then you’ve just lost $150. It wouldn’t hurt to include a cable that can be removed for safety purposes. It also gives users more flexibility in terms of being able to decide what cable length they’d prefer for their respective setup.

I also think including USB-C is something Elgato should implement in the next version. For those without USB-C devices, there can be a Type-C to Type-A cable included in the box in addition to a USB-C cable for those with devices like the MacBook or Mac mini.