PSA: Asking for your Apple ID for Apple Card invite is a glitch, not phishing 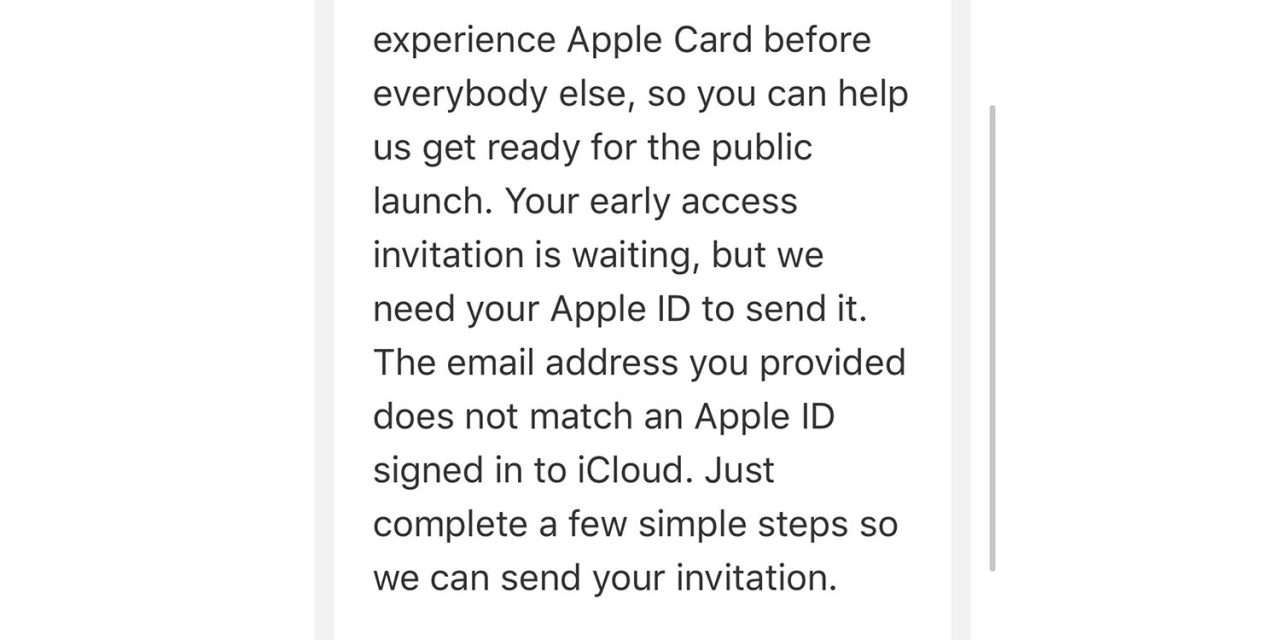 If you’ve received an email from Apple asking for your Apple ID in order to send you an invitation for the Apple Card, it’s not a phishing fraud…

Many would-be Apple Card applicants have taken to Reddit to report receiving an email from Apple asking for their Apple ID. The email is being sent to at least some of those who asked to be notified when card applications were open.

You wanted to be one of the first to get Apple Card — a new kind of credit card created by Apple, not a bank. Good news: Here’s your chance to experience Apple Card before everybody else, so you can help us get ready for the public launch. Your early access invitation is waiting, but we need your Apple ID to send it. The email address you provided does not match an Apple ID signed in to iCloud. Just complete a few simple steps so we can send your invitation.

The issue, they say, is that the email address they provided is indeed the same as their Apple ID. We can confirm that this is true for at least some recipients of the email.

That’s led some to be worried that this is a phishing attempt — which is a perfectly reasonable concern. If you receive an email purporting to be from Apple but requesting your Apple ID, that would normally be a huge red flag.

However, in this case, the email is genuine and does lead to a genuine Apple URL. Many people have multiple email addresses, and it wouldn’t be at all surprising that some have used a different one to request the notification, so it makes perfect sense that Apple would need to send out these emails in those cases.

The mystery is why it is being incorrectly sent to some people who already used a matching email address.

Clearly, it’s some kind of glitch at Apple’s end. One of those affected spoke to Apple and was told that the company is aware of it.

I just got off the phone with Apple about the email which I just received, and they said that a lot of people are getting that email even if they did put in the correct email. He advised me that it is an engineering problem.

If you’ve received the email asking for your Apple ID, the company’s advice is apparently to return to the Apple Card site, hit the Notify Me button again and re-enter your Apple ID email address.

We’ve reached out to Apple for comment and will update with any response.