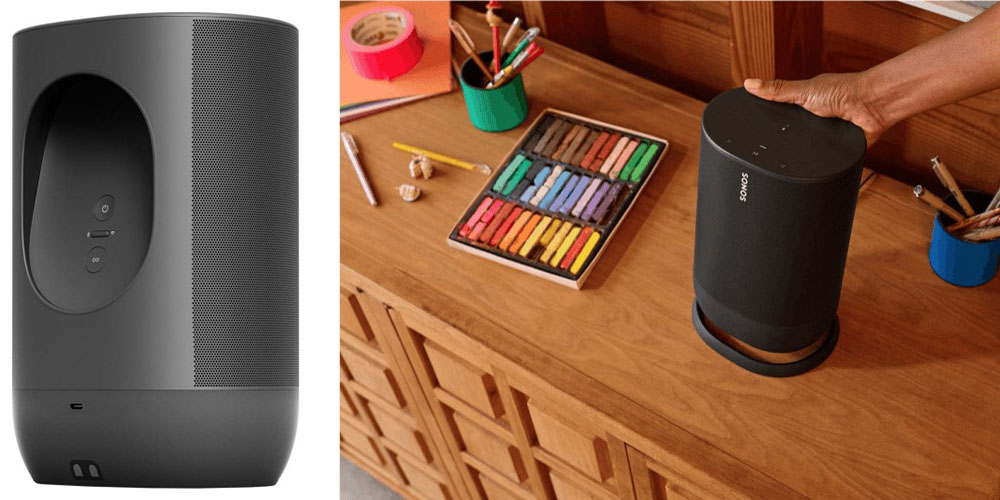 We learned earlier this month that we’d soon be seeing the first-ever Sonos Bluetooth speaker. Existing Sonos speakers are Wi-Fi-only, but the upcoming model is said to support both wireless communication standards, as well as offering AirPlay 2 functionality.

We’ve already seen one photo of the speaker, which looks like a more cylindrical version of the $200 Sonos One, but we’re today seeing more…

German site WinFuture says it has obtained additional marketing shots of the speaker, as well as the official name. All we knew so far is the codename S17, but the site says the consumer-facing name will be Sonos Move.

It’s not just the design of the Sonos Move that’s similar to the Sonos One: the site says that we can expect similar volume and sound characteristics too.

The Sonos Move Wireless Speaker, according to previous reports, is slightly larger than a Sonos One, but should provide about a similar performance […]

It has six microphones to operate voice assistants and, in addition, has built-in buttons for controlling audio playback and volume. LEDs indicate the connection status and the charge level.

The Sonos Move can reportedly run on mains power or an internal rechargeable battery. However, it appears the company is not intending it as a speaker for outside the home, rather as one that can be conveniently moved around within it, but including decks and pools. The speaker apparently comes with a base station, and a recessed grip that allows it to be easily removed and carried to a different room.

More images over at WinFuture.

Availability date and pricing is as yet unknown. The Sonos One, for reference, costs $200. The Sonos Bluetooth speaker is expected to be launched at a media event on August 26 and 27.

The company has also partnered with IKEA for some slightly more budget-focused products. Check out our review of the IKEA SYMFONISK table lamp and bookshelf Wi-Fi speakers.