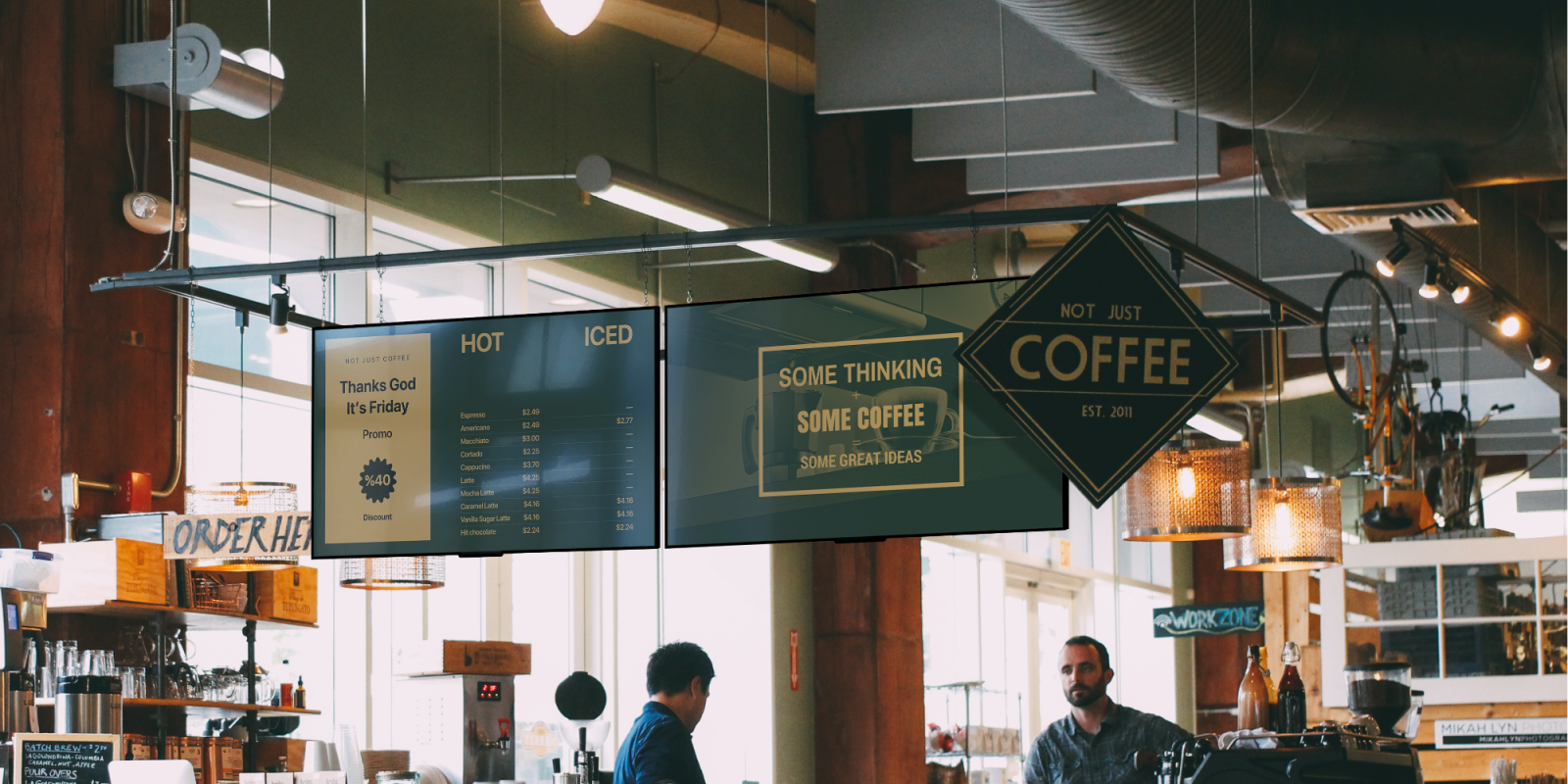 Digital signage is everywhere now. From the low-cost pizza place to movie theatres to major sports arenas, it’s everywhere. Rarely do you see signage that has to be manually changed due to the cost of continual updates. For small businesses, digital signage has often been out of reach because of the high initial cost and complexity of deployment (server infrastructure, complicated software, expensive maintenance, etc.). Thanks to the Apple TV, its management APIs, and some cloud-based software, even the smallest retail stores can now have a digital signage solution.

I’ve been trying to use the Apple TV for digital signage as far back as version 2 (the first “puck model”). I deployed a trick using the Flickr screensaver. I would upload slides to a Flickr playlist, and then have the Apple TV pull from that playlist for its screensaver. It worked well because even if the Apple TV lost power, once it rebooted, it would eventually turn back on to the screen saver. It was a low budget option, and it worked pretty well. We wanted a solution that didn’t require running a cable other than power to the TV and set-top box. Everything data wise ran on Wi-Fi.

Since then, we’ve had a lot of advancements with Apple TV and digital signage, and one of them has nothing to do with the actual digital signage software. The first advancement is Apple building management APIs into the Apple TV.

MDM APIs on Apple TV allows an IT department to monitor and configure an Apple TV from a solution like Jamf. By connecting your Apple TV to an MDM, you can do things like lock the device to a single app, control AirPlay settings, and set up zero-touch deployment. These settings are vital for digital signage rollouts.

This feature is crucial because it allows you to lock an Apple TV to a single application (such as a digital signage app) so it can’t be used for Netflix or Disney+ streaming. This control fixes the issue of what happens if Apple TV loses power or installs a software update and reboots. As soon as the Apple TV comes back on, it’ll auto-launch the app you have chosen.

Controlling AirPlay settings is another strong reason to use an MDM for your Apple TV. You won’t be forced to manually configure each device to put on the proper AirPlay controls. For use cases in the classroom, you might want AirPlay to be enabled, but for common areas like a lobby, you likely want it completely disabled.

For distributed organizations and those with multiple Apple TVs, this is likely the single biggest reason to enroll your Apple TVs into a management system. After you enroll your Apple TVs into Apple School Manager or Apple Business Manager, you won’t have to manually image or configure the devices. An Apple TV will go from unboxing to downloading its configuration profiles, to launching its digital signage software in no time.

There are two significant apps for the Apple TV that offer digital signage solutions. The first is Kitcast. I’ve been using Kitcast for a couple of years at this point. Overall, it’s been a reliable solution. It’s cloud-based, so there are no on-site equipment requirements to roll it out. The web app is easy to use. You can upload slides you made manually in a program like Photoshop or Pixelmator. You can also use a built-in editor right inside of Kitcast. Kitcast allows you to pull in photos, videos, a menu board, social updates, and more.

Another great feature of Kitcast is how you can have different “playlists” for different groups of Apple TVs that can be set to change on a schedule. Of course, Kitcast also supports Apple TV’s MDM APIs. You can easily distribute the Kitcast tvOS app and automatically configure the Apple TV for your account.

There is also an option to configure Kitcast using Apple Configurator, but it’s a pretty time-intensive process. If you want an even lower-cost way to roll out Kitcast, they also offer an Amazon Fire Stick app that works well, but you’ll lose some of the deployment simplicity that the Apple TV brings. 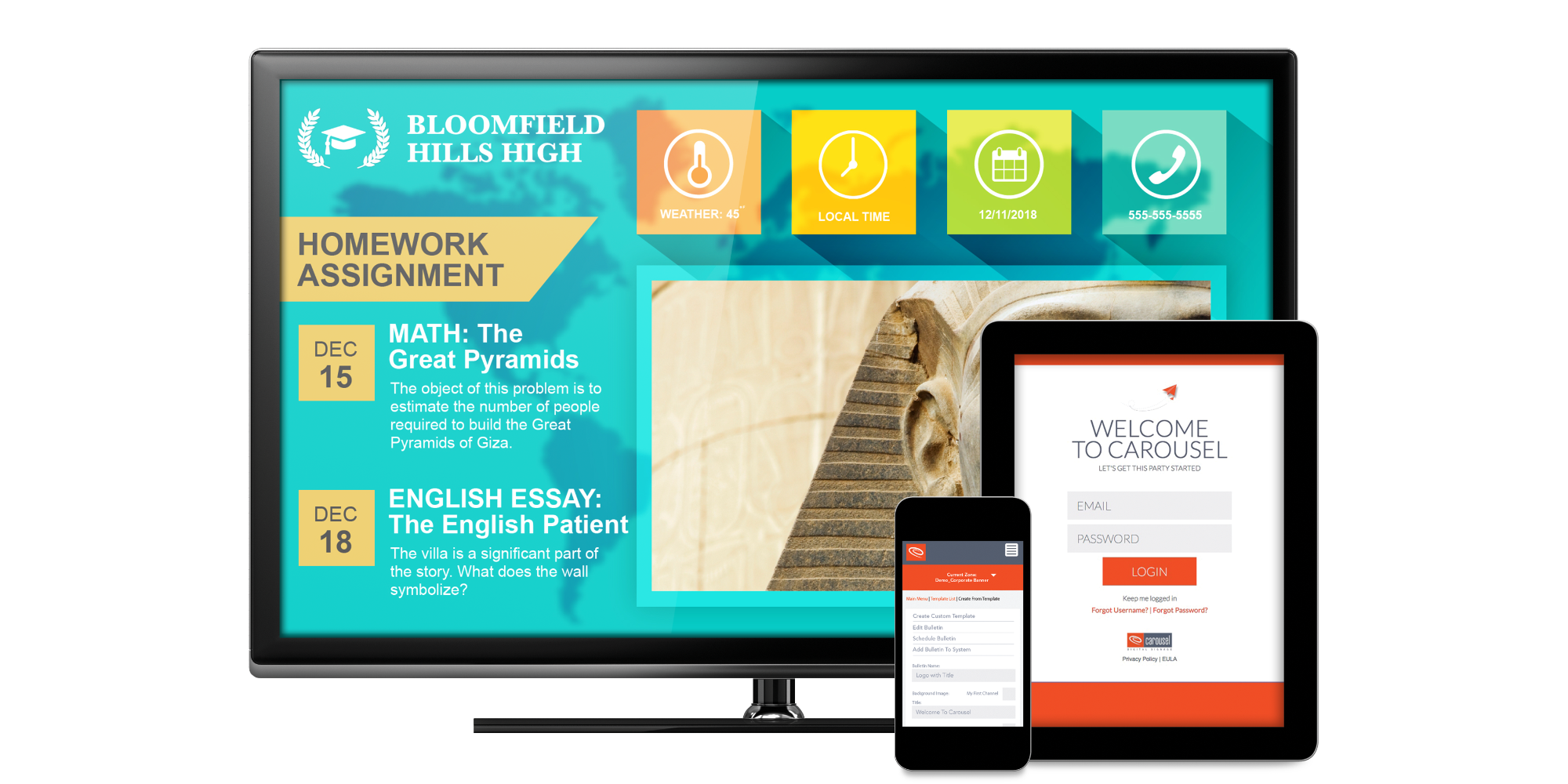 Carousel has been a player in the digital signage game for years, but the new cloud product is what I am really interested in looking at instead of their previous server-based solution. They have deep integration with Jamf Pro, so it’s a simple roll out for even the largest of deployments. Carousel offers a host of content options that will be attractive to organizations looking to deploy digital signage.

Carousel offers a Core and a Pro feature set, and you can browse the differences to determine which one is best for your organization.

Apple has turned the Apple TV into a really attractive platform for digital signage. Their MDM APIs allow for easy deployment at scale for all types of organizations (especially distributed ones). The Apple TV hardware is reliable and has rock-solid Wi-Fi, so it’s inexpensive to deploy as long as you have power. The only thing I’d change is the price.

At $149, the Apple TV is quite expensive. You can buy a 32″ Fire TV that has access to Amazon’s app store and use the Kitcast app directly on the TV. It also costs less than the Apple TV box itself. You’d undoubtedly lose the manageability of the devices, but if you only have a couple of TVs, it becomes an attractive option. If Apple wants its platform to become a standard for digital signage in the future, a lower-cost TV hardware option is going to become essential.