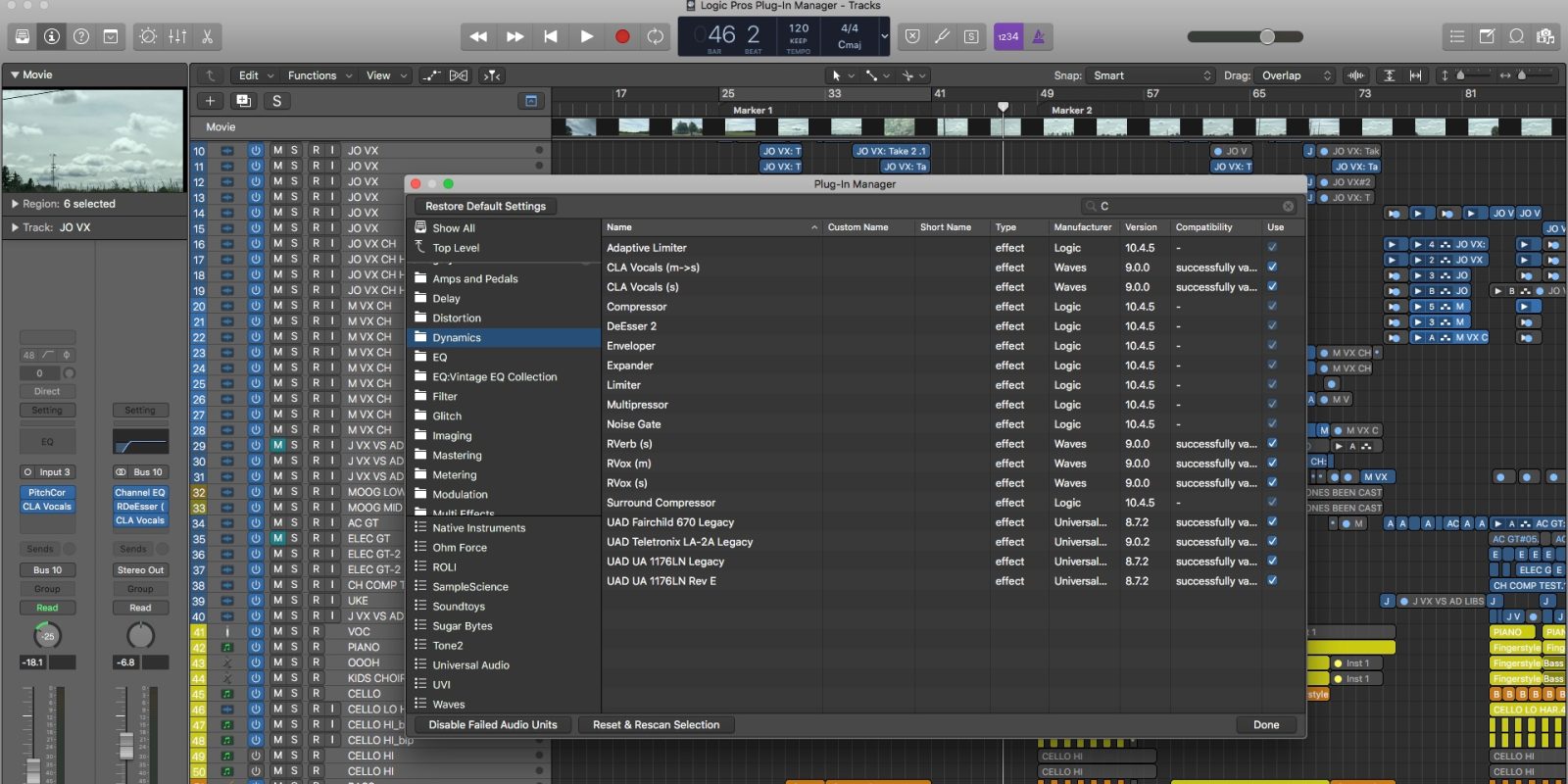 Today we are exploring the Logic Plug-In Manager. This handy tool is built-in to Logic Pro X and allows us to manage the plethora of included plug-ins as well as all of your favorite third-party effects, instruments, and more. For years, Logic Pro X users were stuck with the app’s stock plug-in hierarchy system — an organized list of all the plug-ins currently enabled for your Logic Pro system — before Apple finally introduced a feature that allows for a custom-made directory. Whether you’re just getting started or already have a gigantic collection of third-party plugs, with Plug-In Manager we can completely customize the way we access our gear — making it significantly easier to get at them and subsequently providing a much more personalized experience for creatives.

Once you have the handy organizational tool open (Logic Pro X menu > Preferences > Plug-In Manager), you’re greeted with a basic list of all the plug-ins installed for your Logic Pro system, Apple and third-party included. Along the left hand side, you’ll find the Category panel that represents the folder hierarchy found in the Audio FX menu on the tracks in your Logic projects. Not only can we adjust the way the plug-ins are organized in these folders, but we can also create our own custom directory that will, in turn, appear in the Audio Effects menu.

Now we just get to draggin’ and droppin’ to create our custom plug-in menu. As you can see on the large main panel, all of your plug-ins can be organized in several different ways along the top, but the search bar and the manufacturer list in the bottom left hand panel can also make rummaging through larger collections much less tedious.

Drag the desired plug-in from the main panel on the right to whatever folder you want in the Category panel. You can also just select and hit the delete key (or right-click > Remove) to remove plug-ins from a folder. You’re not actually deleting or removing these plug-ins from your system, just the folder they appear in — you can can use the trusty Command > Z undo move if you catch yourself removing one by accident.

We can dig in a little bit deeper here in terms of customization though. You’ll notice that little + button in the category panel. That sucker will let you create your own plug-in folders that will appear in the Audio FX menu.

I have come to be very familiar with Logic’s stock plug-in hierarchy and have chosen to integrate my customizations there as opposed to completely rewriting the book here, but feel free to get wild. A few extra folders have served me well (mastering and some boutique, glitch-like units) along with dropping some of my go-to third-parties into existing categories. 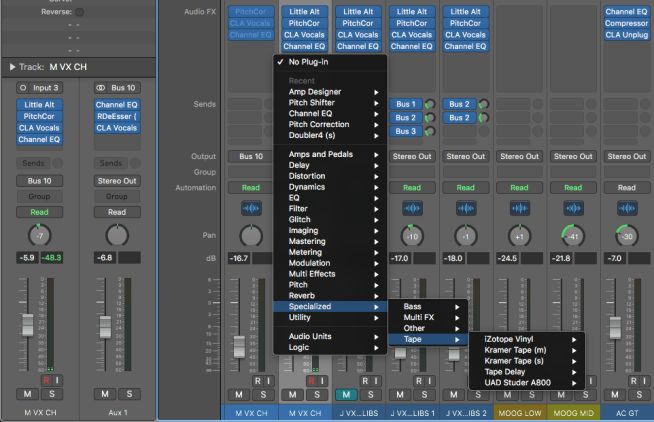 While I also, for the most part, prefer to keep the plug-in menu fairly basic, you can nest folders (or create folders in folders) as well. For example, I have expanded Apple’s stock Specialized folder to house four sub folders for bass units, loop/glitch effects, tape emulation, and some other oddities. You just have to create a new folder as outlined above using a simple naming scheme that works as follows.

To create a folder inside of the Specialized folder for example, simply create a new one and name that folder Specialized: subfolder name, or Specialized: Tape, in this case. Aside from the fact that it seems a little ummm, odd, that we have to do the naming thing like this just to get a subfolder, it’s as easy as that. 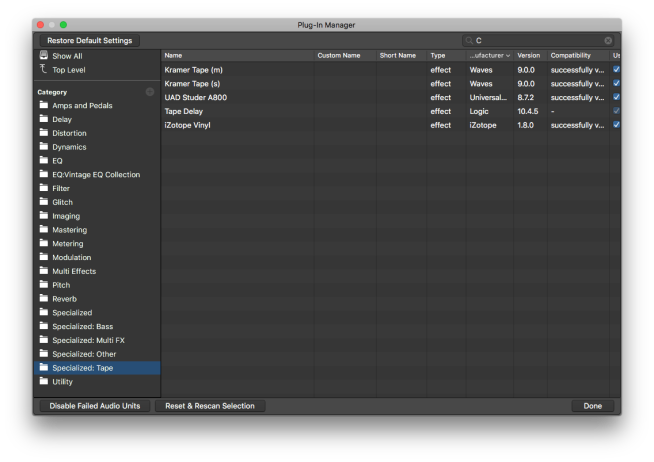 The Top Level folder accessible in the top left corner of the Logic Plug-In Manager houses all of the software instruments and effects that populate menus like the Input (or software instrument list) and MIDI FX on the tracks in your Logic projects. So while you can’t get quite as detailed with the personalization here, you can add and remove plug-ins from this list in much the same way.

Back up your Logic Plug-In Manager

If you’re the type to tinker with these sorts of things or just have a massive collection of virtual gear, it can take quite a while to actually get things the way you like it. But once it’s set it’ll stay that way. Providing your whole system doesn’t blow up on you or something anyway. Fret not, you can backup your custom plug-in folder manually if you don’t already do these sorts of backups on a regular basis: User Name > Music > Audio Music Apps > Databases > Tags.

And some Final Thoughts…

Much like our favorite hardware peripherals, there are some features hidden inside of Logic Pro X that just make life easier and your experience with the app more enjoyable, no matter what you might be using it for. They might not be the most technologically-ground breaking features, but anyone with hundreds of straight line edits to take care of, or this week’s Youtube video audio to edit can certainly appreciate a power user tip here and there. Whether it’s the Plug-In Link system we detailed previously or renaming regions with a single click, Logic Pro X’s unsung heroes are not to be overlooked.

Recently in the studio finishing up mixes on a new Bon Iver meets Lord Huron-like project, the topic of being able to customize the list of available plug-ins in the Audio Effects menu on Logic came up. So it seemed like a fitting time to re-visit the the Logic Plug-In Manager with some helpful tips. In this case it was some project-specific adjustments the artist was after in order to get at certain plugs faster, but familiarizing yourself with the Plug-In Manager is an intelligent idea regardless.

Considering how often many of us are in and out of these menus during daily use, it’s worth putting some time in with the Logic Plug-In Manager to get things organized. This, in combination, with the auto populating favorites section on the Audio FX menu create a much smoother workflow and a more application-specific box of tools for creatives.