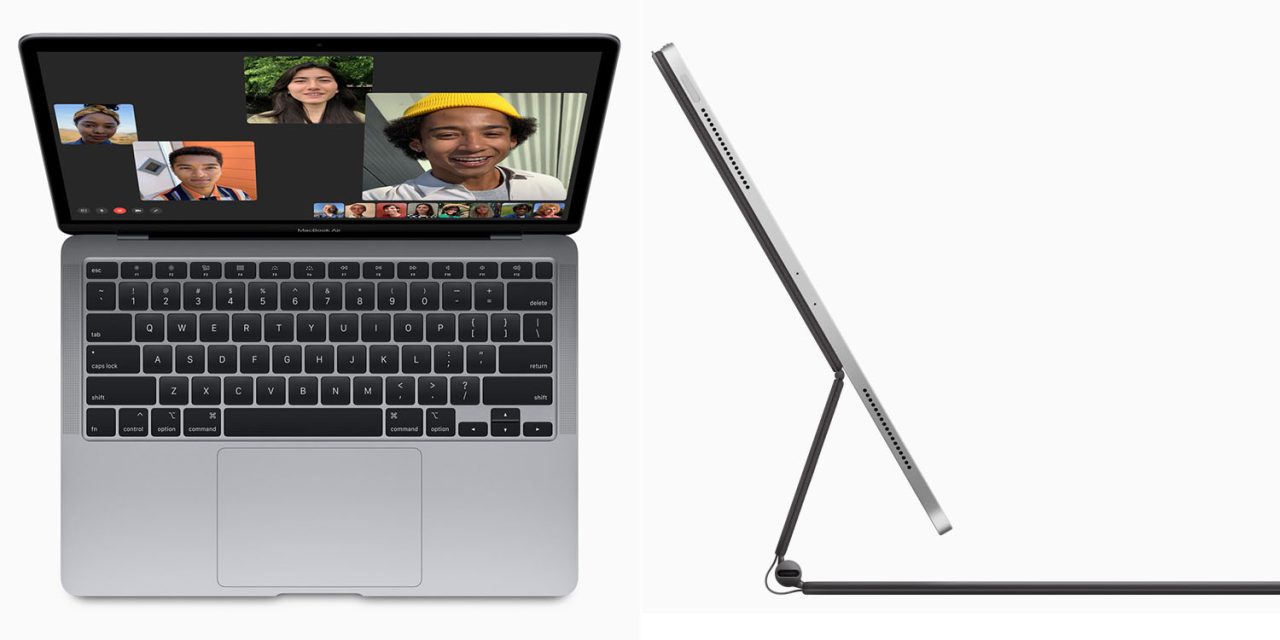 There had been much speculation about whether or not we’d see a March event. As it turns out, the coronavirus would have put paid to that anyway, but the new MacBook Air and iPad Pro Magic Keyboard announced today would absolutely have justified one.

I’d start by asking them what they wanted to do with it. Once they told me, for those with simpler needs, my “laptop” recommendation would actually be to buy an iPad with a Brydge keyboard. And normally the $329 iPad would be the one I’d suggest, as you’d need a good reason to buy the much more expensive iPad Pro.

For those whose needs justified a Mac over an iPad, it would again be the cheapest model I would usually recommend. The MacBook Air was more than enough Mac for most people; again, there would need to be a good reason to recommend a MacBook Pro.

Things did, however, grow more complicated when it came to the MacBook Air. First, we had all those years when Apple let it sit unloved, and it looked increasingly elderly compared to all the new products coming out.

Then we had the butterfly keyboard models. Once the extent of the keyboard issues became clear, it grew harder to recommend. My suggestion then became to buy a used older model for now, and wait for a better one. That better one has arrived today.

Barring any unwelcome surprises when I try one, the new MacBook Air seems certain to win back the crown of wholehearted default Mac recommendation. The three big changes are, in order of importance:

Plus hitting that psychologically important $999/£999 price point (remember that VAT is included in the UK price before you begin a “pound for dollar” rant).

Many of my friends are writers. The quality of the keyboard is crucial, which was what made me very reluctant to recommend models with a butterfly keyboard. Especially for those who like to work from coffee shops some of the time.

Having been using the 16-inch MacBook Pro with its scissor keyboard for a few months now, that seems to have completely resolved the issue, and it’s more comfortable to use, too.

I’m a digital pack rat who likes to have my photo and video libraries to hand while travelling, but for most people, storage capacity isn’t the big issue it used to be. Cloud storage means it’s more feasible to have your current work on your laptop and archived work in the cloud. All the same, 128GB did feel utterly ridiculous. 256GB is a much more reasonable base storage, and an amount that will keep most people happy.

Finally, while it was relatively rare for me to recommend a MacBook Pro over a MacBook Air anyway, the performance improvements of the new Air will make this even less likely. The new machine should be perfectly capable when it comes to occasional and casual video editing, for example.

All told, that should make my recommendation simple.

The dividing line between the iPad Pro and the MacBook Air just got trickier.

Things already changed dramatically in 2018, with the launch of the new iPad Pro models.

My general advice with the iPad has been that, unless you need any of the Pro features, the cellular version of the 9.7-inch iPad with 128GB storage is likely the one to go for. But this year is a little different.

This year I’ve been saying that, if you can afford it, you’re never going to regret buying the new 12.9-inch model.

Even more so when iPadOS 13 came along.

But of course that was an expensive option, especially when you add a good keyboard, so deciding whether an iPad or Mac was the better bet became more complicated.

That’s even more true now when you compare the latest costs. The iPad Pro starts at $999, and since on-board cellular data is one of the benefits over the Mac, I’d say a more realistic starting point is $1,149.

So my default advice changes

If you’re on a tight budget, nothing changes: Get the $329 iPad — ideally bumping to $429 for the 128GB model — and then the best keyboard you can afford, ideally the Brydge.

There are still reasons to consider the much more expensive iPad option. If you do a lot of online stuff on the move, then having on-board mobile data is a lot more convenient than Wi-Fi or iPhone hotspot. Coffee-shop Wi-Fi often isn’t the best, and most iPhone plans limit the amount of data you can use for tethering.

The battery life is better. I do genuinely get around 10 hours’ real-life use out of my iPad Pro; I’ve rarely gotten more than five hours of real-life use from any MacBook.

And the iPad is a more flexible device. Being able to use it as a tablet as well as a pseudo-laptop makes much more sense for many applications: drawing, many games, reading, casual web browsing, personal movie viewing, and so on.

As for the iPad Pro Magic Keyboard, I’ll reserve judgement until I try it. The “floating” design looks great, and a lot more convenient than the Brydge when it comes to inserting and removing it, but I haven’t been impressed by the Smart Keyboard Folio, so that raises two questions. How will it feel? And will it be usable on your lap? We’ll see when we get to try one.

It’s a strange world, though, where the Mac becomes the base case, and the iPad becomes the luxury one! One way or another, these new launches are a game-changer.

What’s your own view? Do you think the new MacBook Air is the better default choice, or does the iPad Pro with Magic Keyboard justify the extra expense? Please take our poll, and share your thoughts in the comments.