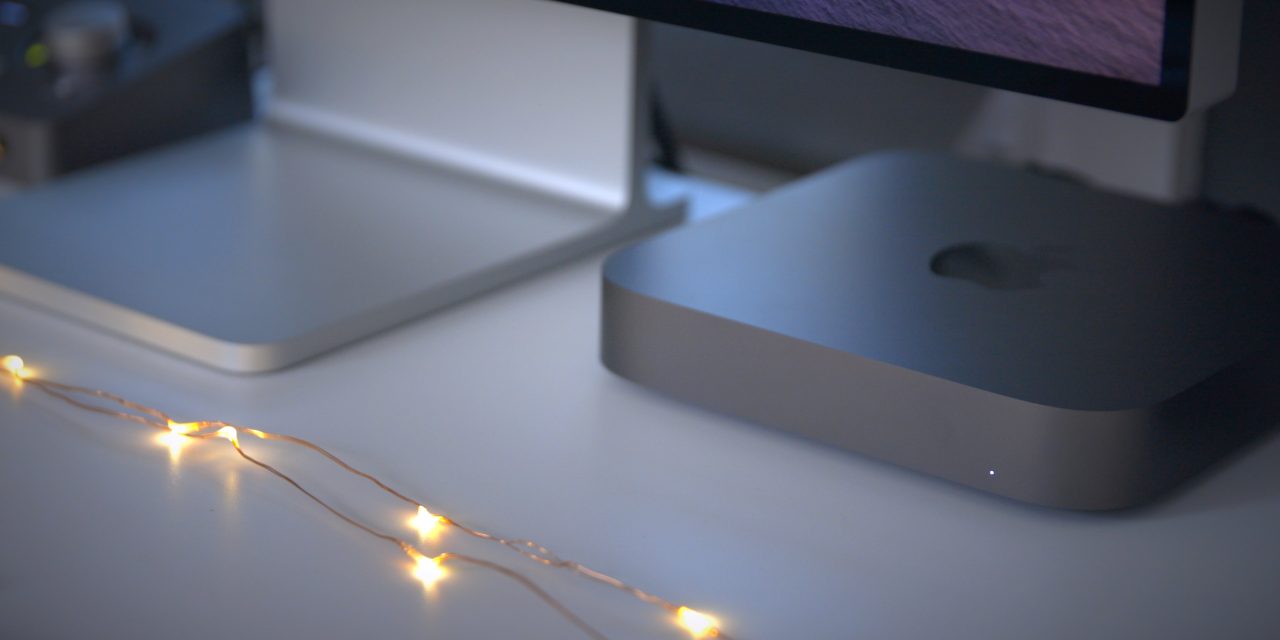 At the time of its release back in 2018, the Mac mini had the designation of being the most versatile Mac in Apple’s entire desktop lineup. With the release of the Mac Pro, that designation now belongs to Apple’s professional-oriented desktop machine with PCIe expandability.

But the Mac mini remains one of the most value-laden Macs that Apple currently sells, and it’s the second most versatile Mac next to the Mac Pro. Watch our latest episode of The Rewind as I take another look at Apple’s diminutive Mac.

As a footnote to the release of the 2020 MacBook Air, Apple updated the storage capacity of both the standard base $799 configuration, and the upgraded $1099 configuration with 256GB and 512GB of storage respectively. While it’s still the same Mac mini from 2018, users now get more storage for their money on the two off-the-shelf configurations.

Previous standard Mac mini configs featured a measly 128GB or 256GB of flash storage, with the former hardly being enough for modern-day computing. Apple seems to have finally realized that 128GB of storage isn’t enough for today’s Macs, as we’ve seen it slowly eliminating base 128GB SKUs across the entire Mac product line.

It’s also important to remember that storage size isn’t merely about capacity, but speed is also involved. For example, the 128GB flash storage tier featured a measly 600MB/s write performance, while the 256GB models and higher more than doubled that.

One of the most attractive qualities about the Mac mini is in its name: mini. Because there’s no display, and it resides in a compact form factor, the Mac mini is the most flexible computer that Apple sells in terms of placement. This computer looks good on a desktop, next to a TV in a home entertainment system, or virtually anywhere else. It’s small size and stature makes it an ideal desktop companion for minimalists. 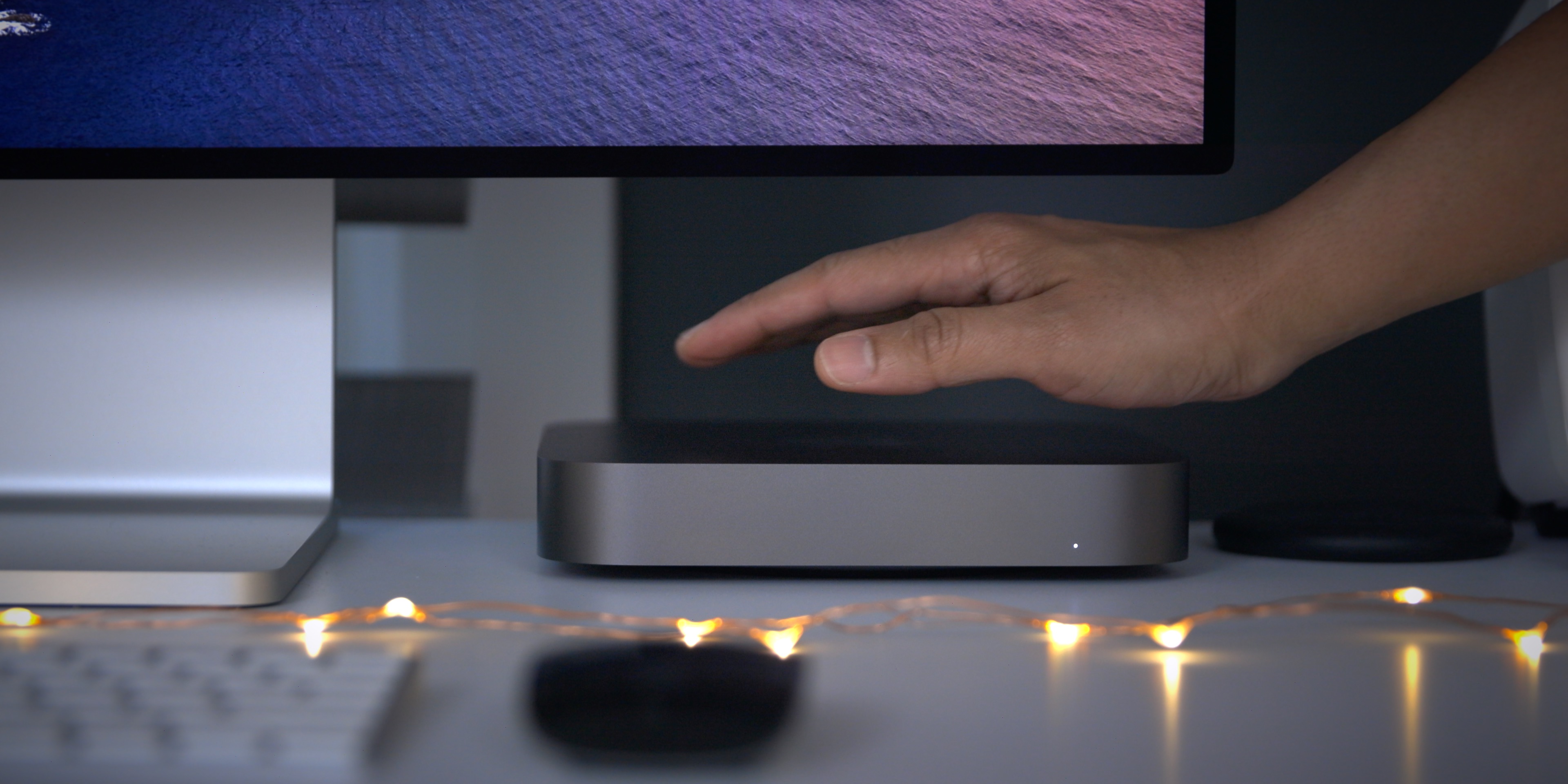 While not nearly as quiet as a Mac Pro or iMac Pro, the Mac mini does a fairly good job of keeping fan noise down when under load. It’s impressive given how tiny the enclosure is. Fan noise is definitely noticeable, but it didn’t seem to bother me like I thought it would when coming from inherently quiet machines like the Mac Pro and iMac Pro.

At just $799, the Mac mini is the cheapest desktop computer that Apple makes, and to be honest, even with older 8th-generation CPUs it remains a good value. That being said, the $799 version comes with a 3.6GHz quad-core Intel Core i3, which may prove to be a bottleneck depending on how you plan on using your Mac mini. 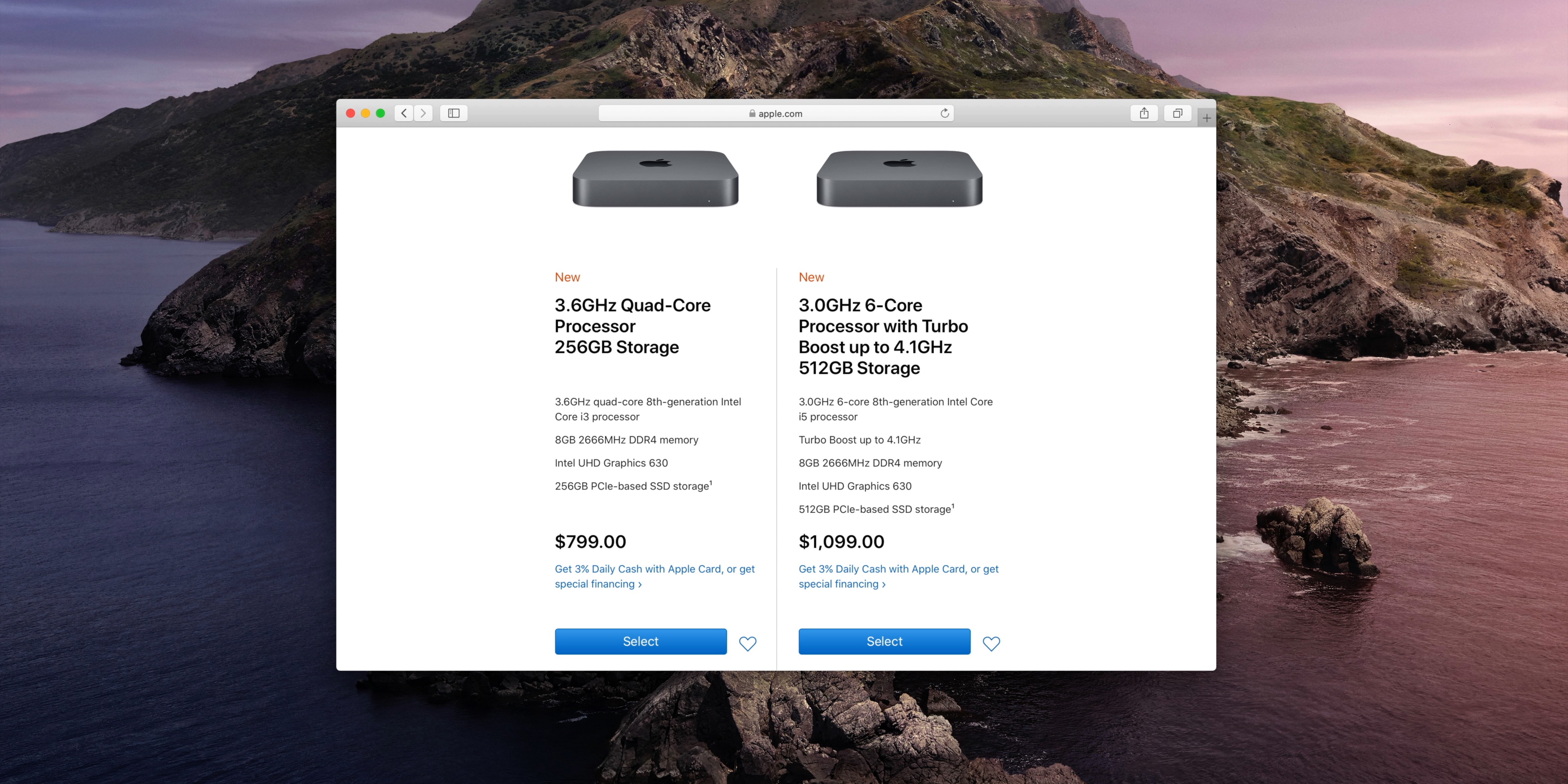 The i3 CPU lacks Turbo Boost and Hyper Threading. In other words, it’s a very basic quad-core CPU that’s should be more than fine for basic tasks, but you’ll find the upgraded six-core i7 CPUs much better able for handling intense workloads like video editing in Final Cut Pro X, Handbrake encoding, etc. 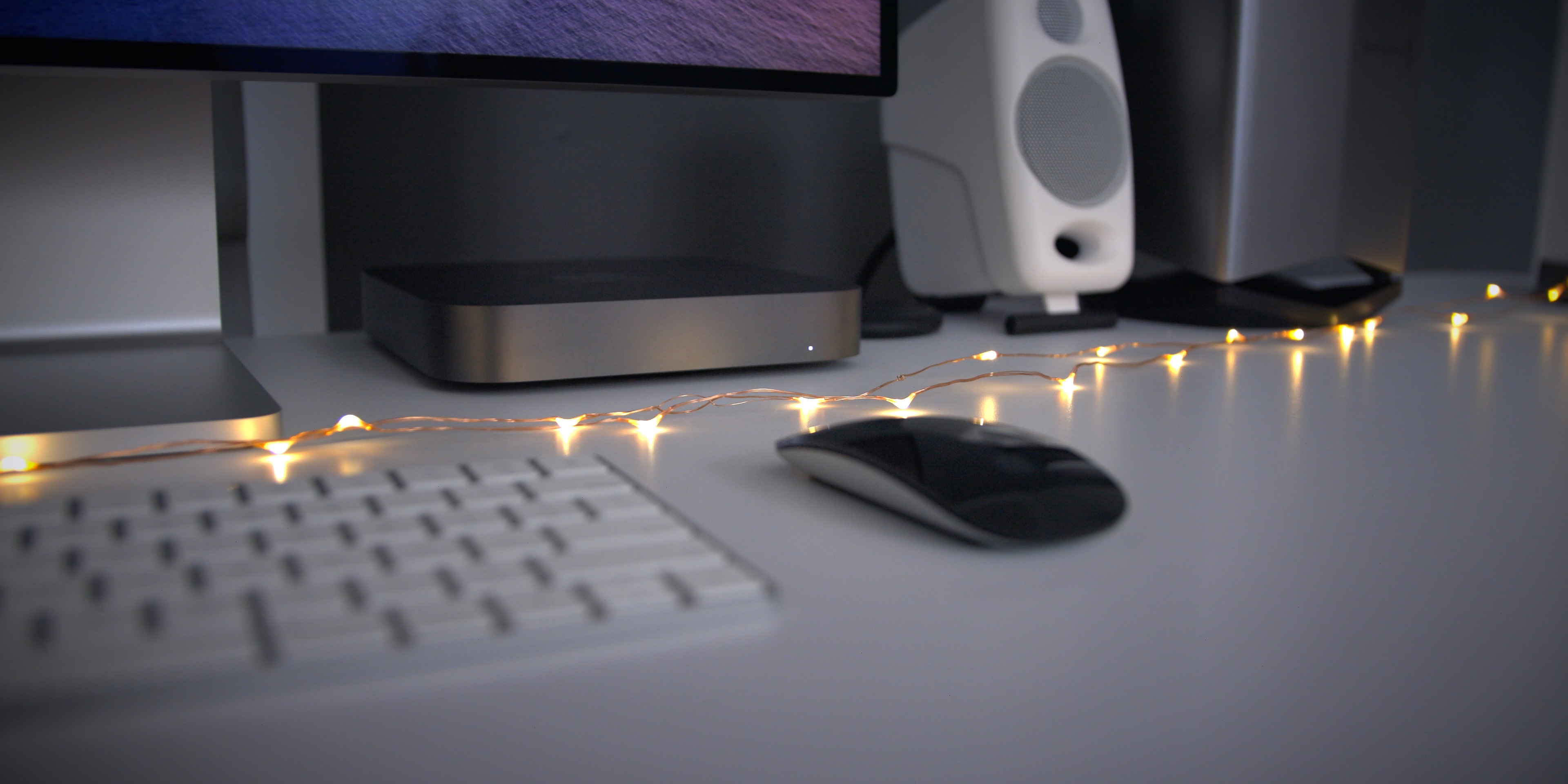 If you can afford it, I recommend upgrading to the i7 CPU over every other upgrade available for the Mac mini. Normally I’d say upgrade the RAM as well, but I recommend doing that for yourself instead. Upgrading the RAM in the Mac mini takes a little time to learn, but I’ve done it so many times now that I can perform the upgrade in around 10 minutes. I plan on making a brand new video about Mac mini RAM upgrades in the future, so stay tuned.

The worst thing about the 2018 Mac mini was its paltry integrated Intel UHD Graphics 630 GPU, but that’s to be expected from a computer that resides within such a small enclosure. A couple of years later, and it’s still no surprise; this GPU remains the Achilles’ heel of the Mac mini. 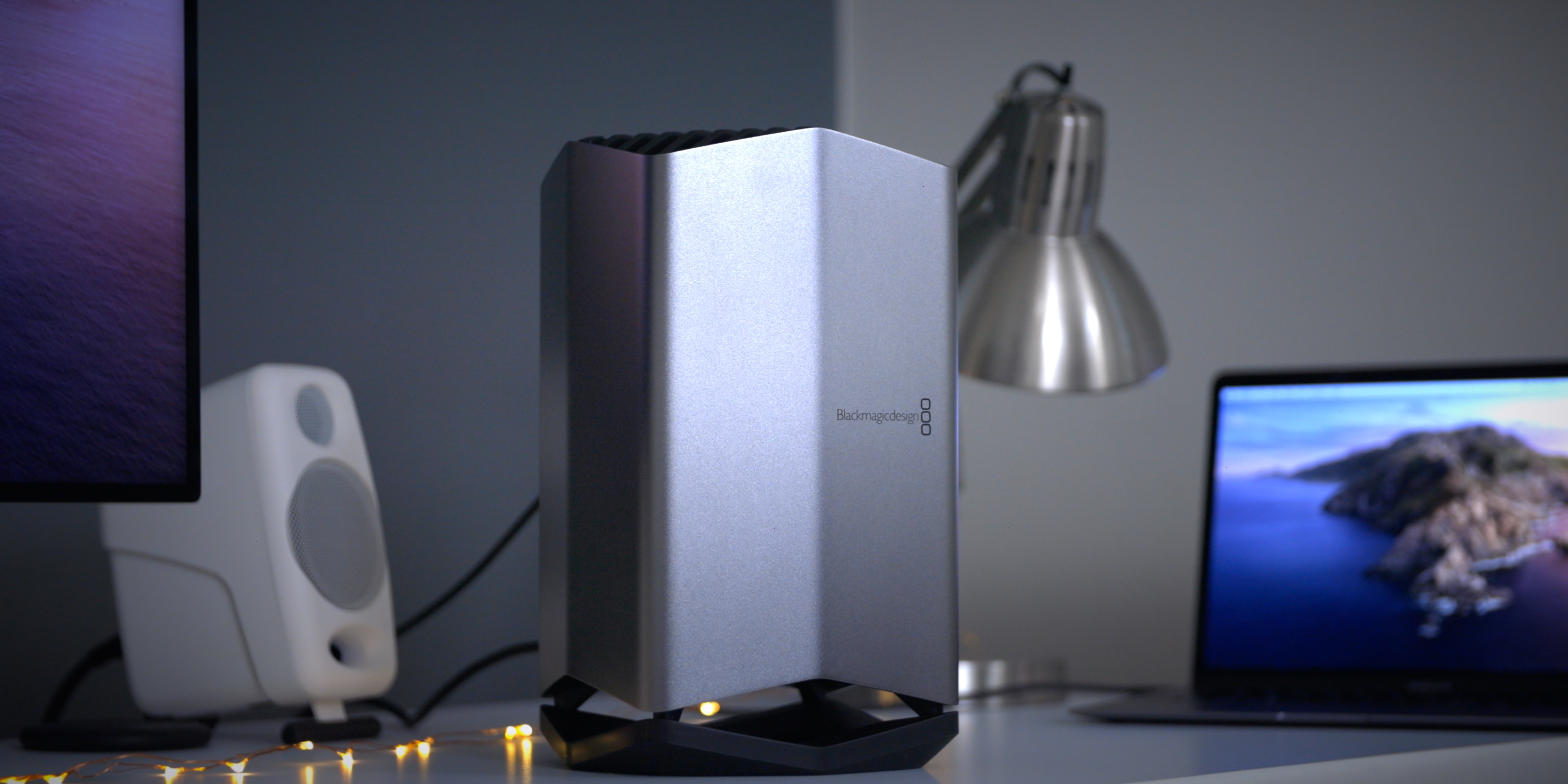 The good news is that thanks to Thunderbolt 3, the GPU issue can be easily addressed by adding an external chassis. With Thunderbolt 3 connectivity, it’s incredibly easy to connect external graphics to significantly enhance the GPU performance of the Mac mini.

I have my 2018 Mac mini more or less permanently paired with the Blackmagic eGPU Pro. This external chassis, which features a Radeon Pro Vega 56, is very quiet and provides iMac Pro-like performance. The downside of such a chassis is that it’s expensive and somewhat bulky, but you can always opt for alternate eGPU options if desired. 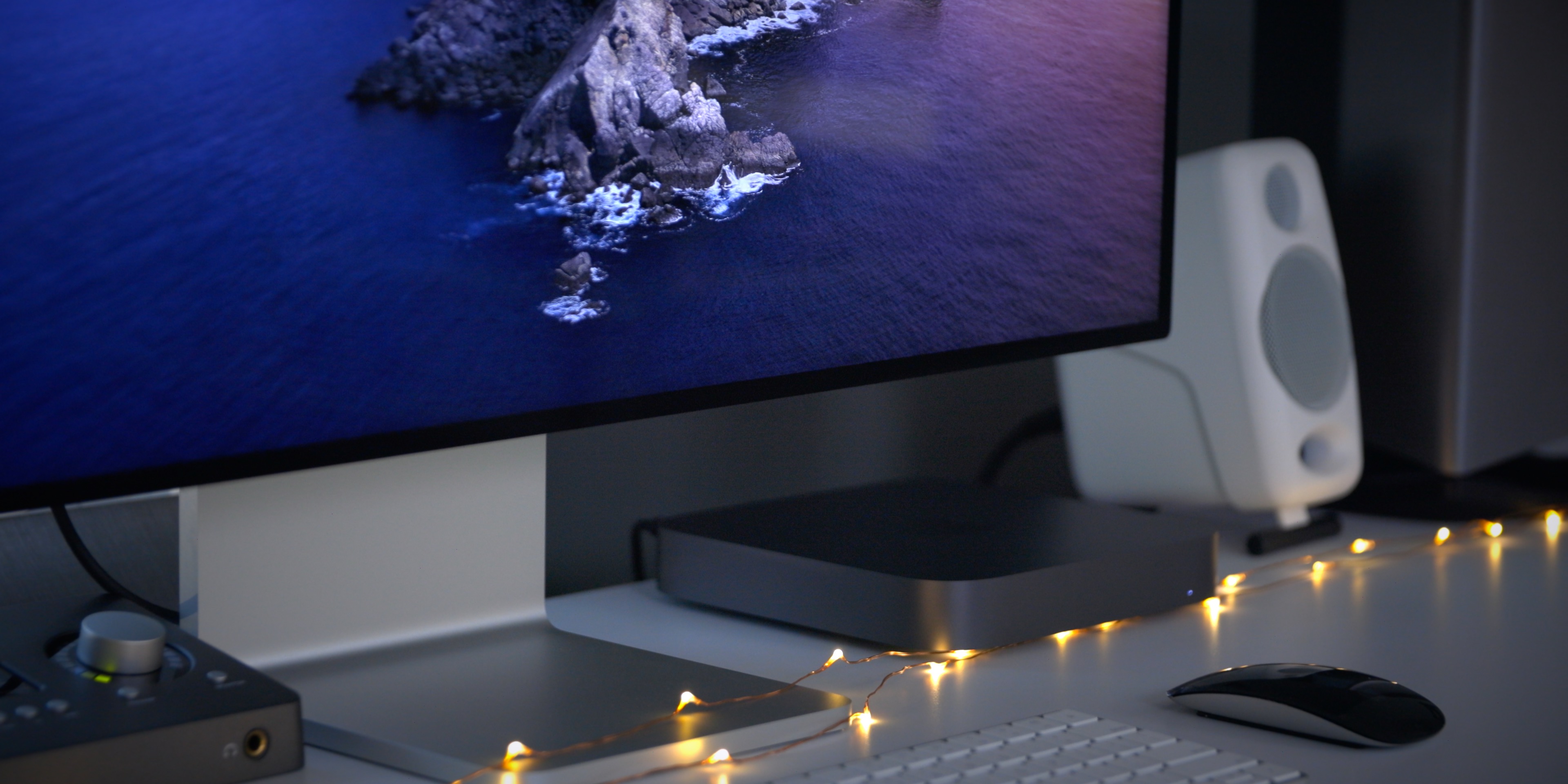 One of my favorite things about the Mac mini is that its RAM is upgradable — only the 5K iMac and Mac Pro feature easier RAM upgrades. You can save hundreds of dollars by opting to upgrade the RAM inside the Mac mini yourself instead of adding it on during the build-to-order process. 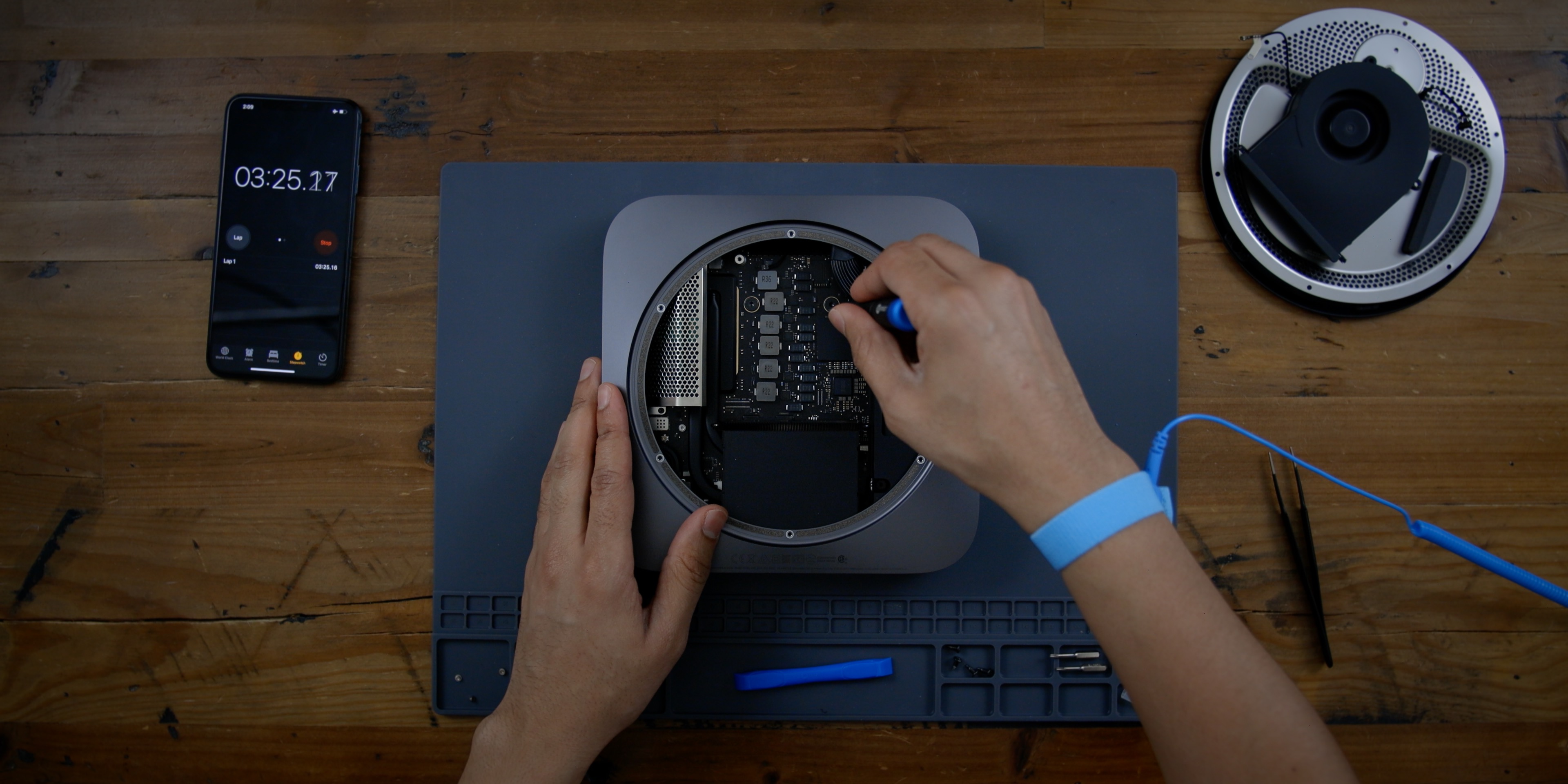 As previously mentioned, upgrading RAM in the Mac mini is extremely simple and straightforward. Of course, it’s not as easy as it is to upgrade the RAM in the 5K iMac or the Mac Pro, but with a little bit of know-how, the proper tools, and about 15 minutes, you can easily upgrade the 8GB base RAM to 32GB or 64GB of RAM, which you can acquire much cheaper via Amazon. 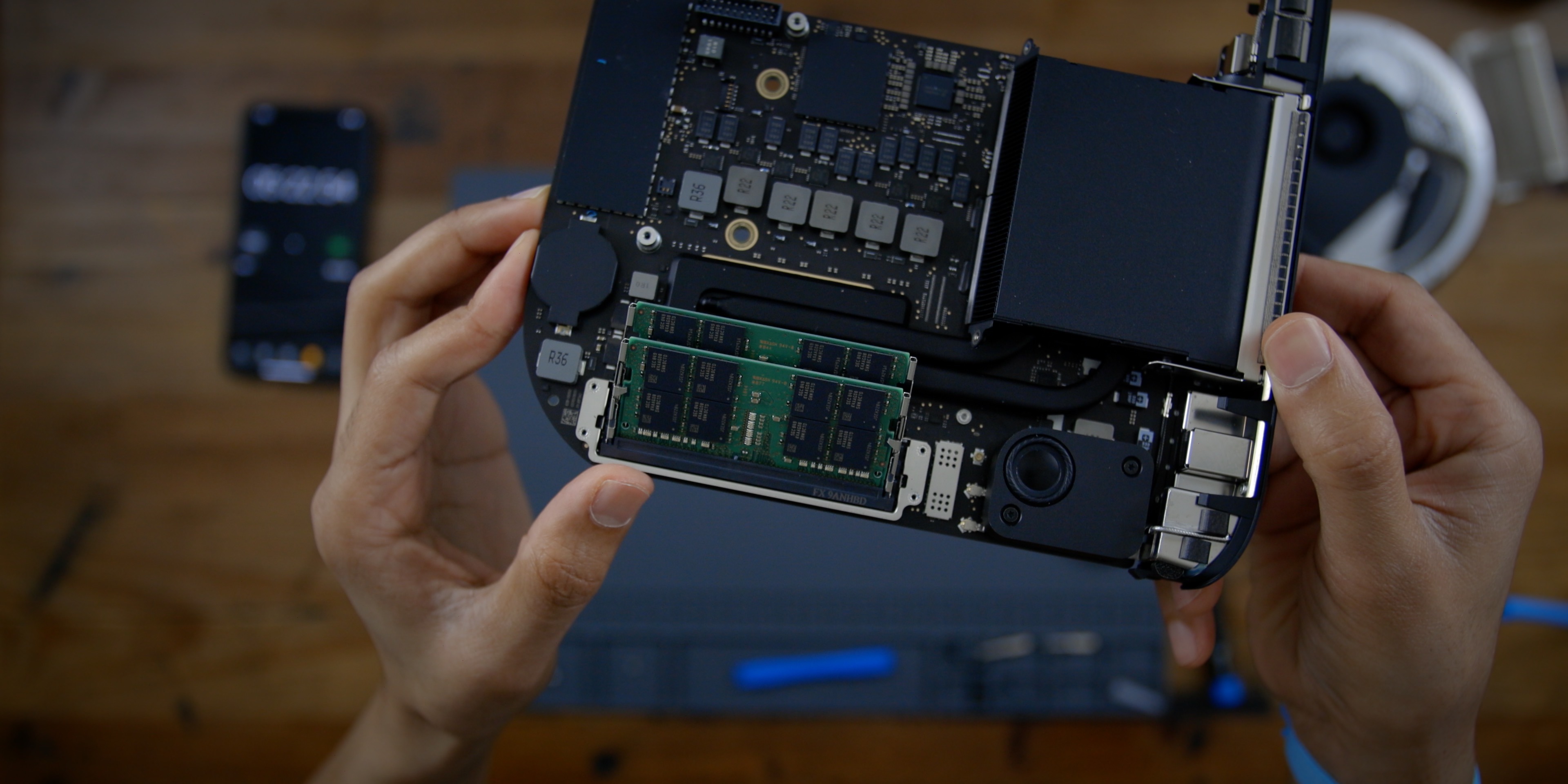 In many use cases, 32GB of RAM will be enough via two 16GB modules. If you want 64GB, you’ll need two 32GB modules since the Mac mini features just two SODIMM slots. 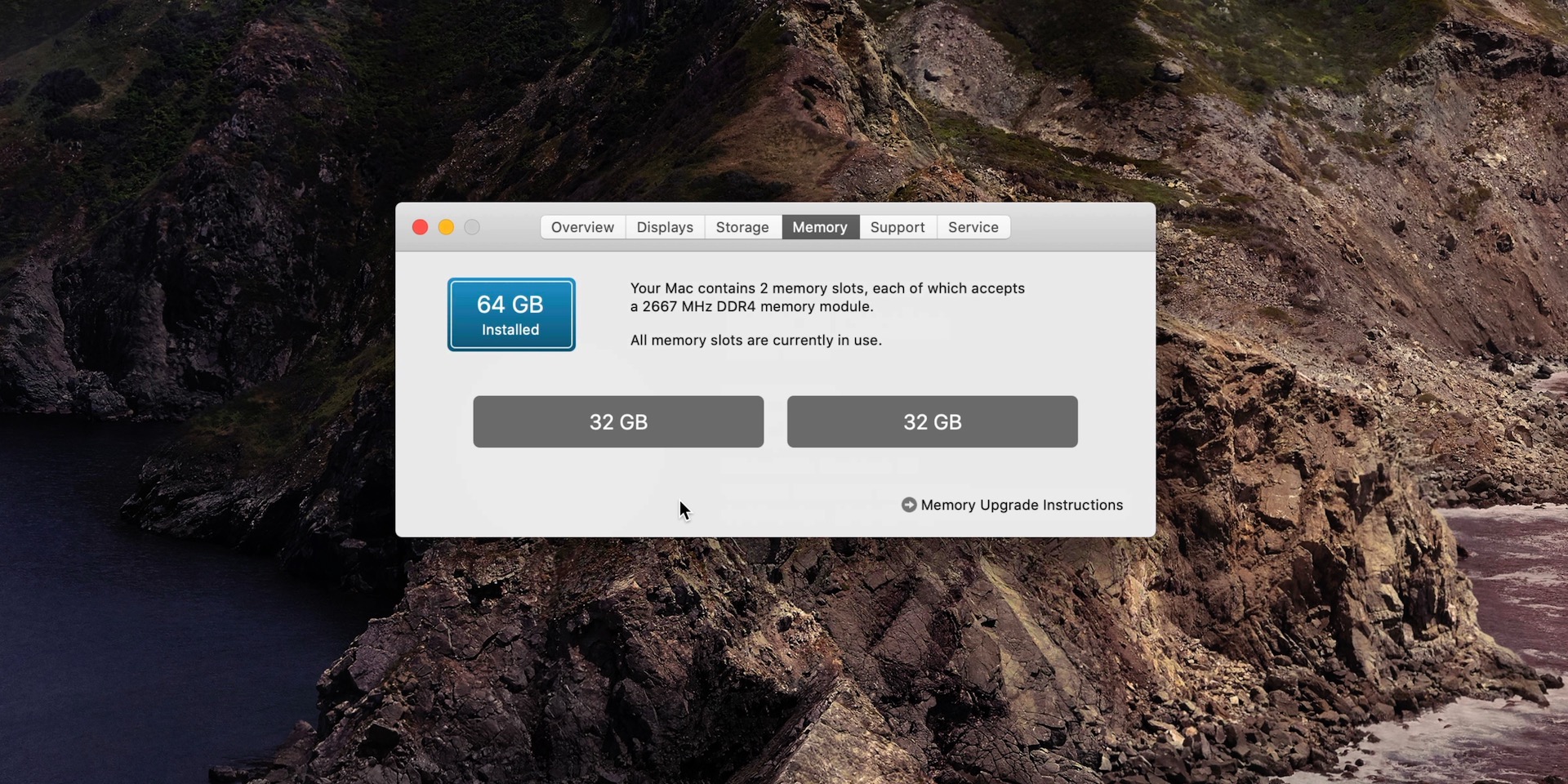 Having lots of RAM on tap is essential for heavy workloads. As a regular Final Cut Pro X user, a most frustrating bottleneck occurs when you run out of RAM while editing video. This causes writes to the swap files, which results in stutter, lag, and other suboptimal performance issues. With the 2018 Mac mini, RAM upgrades are so easy that memory starvation should never be an issue.

As much as I love having easily-upgradable RAM, like I said in my original review of the 2018 Mac mini, this machine’s biggest advantage is its external expandability. Unlike the 5K iMac, the Mac mini features four Thunderbolt 3 ports, which lend you many more options when it comes to external expansion. 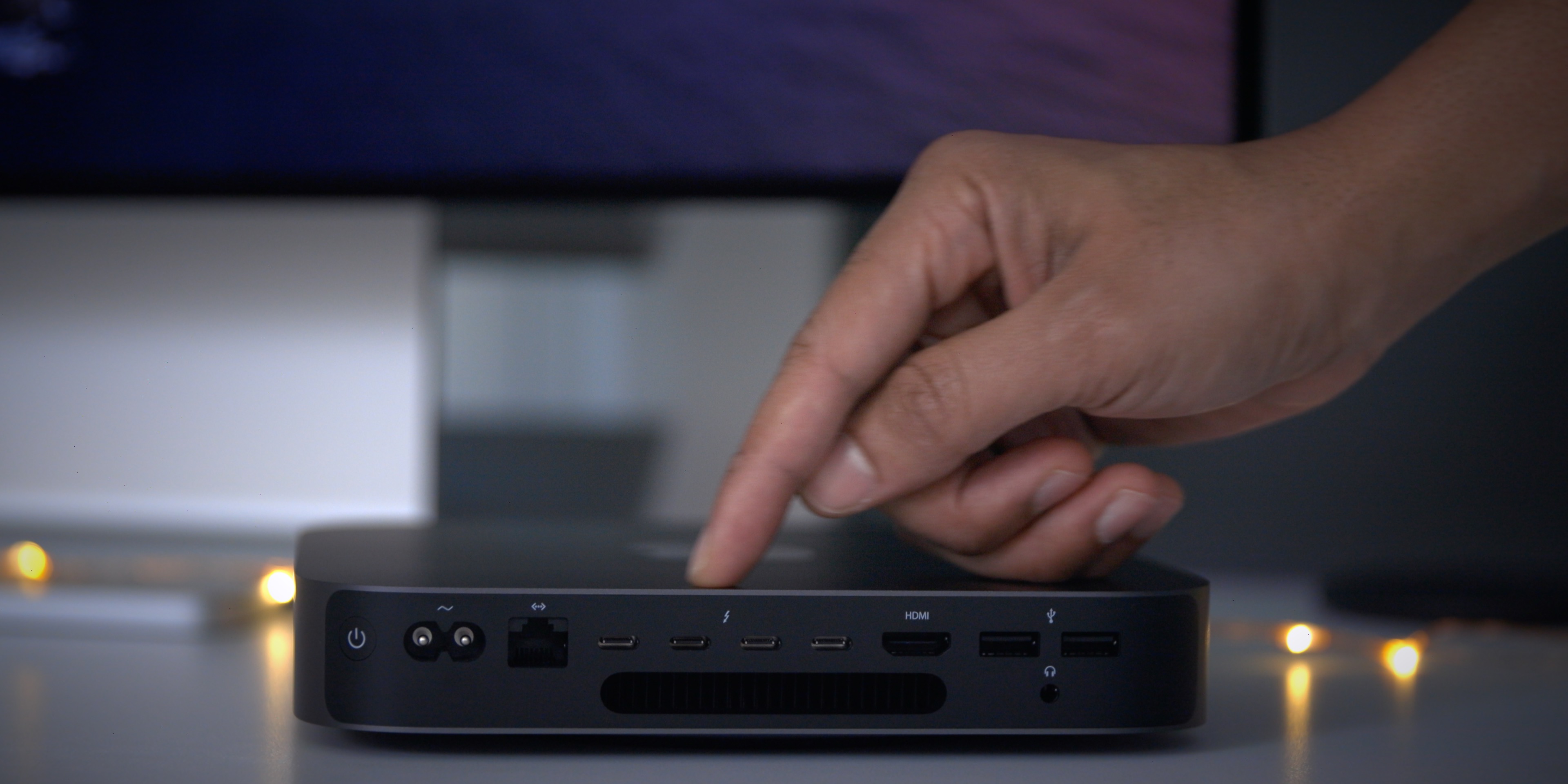 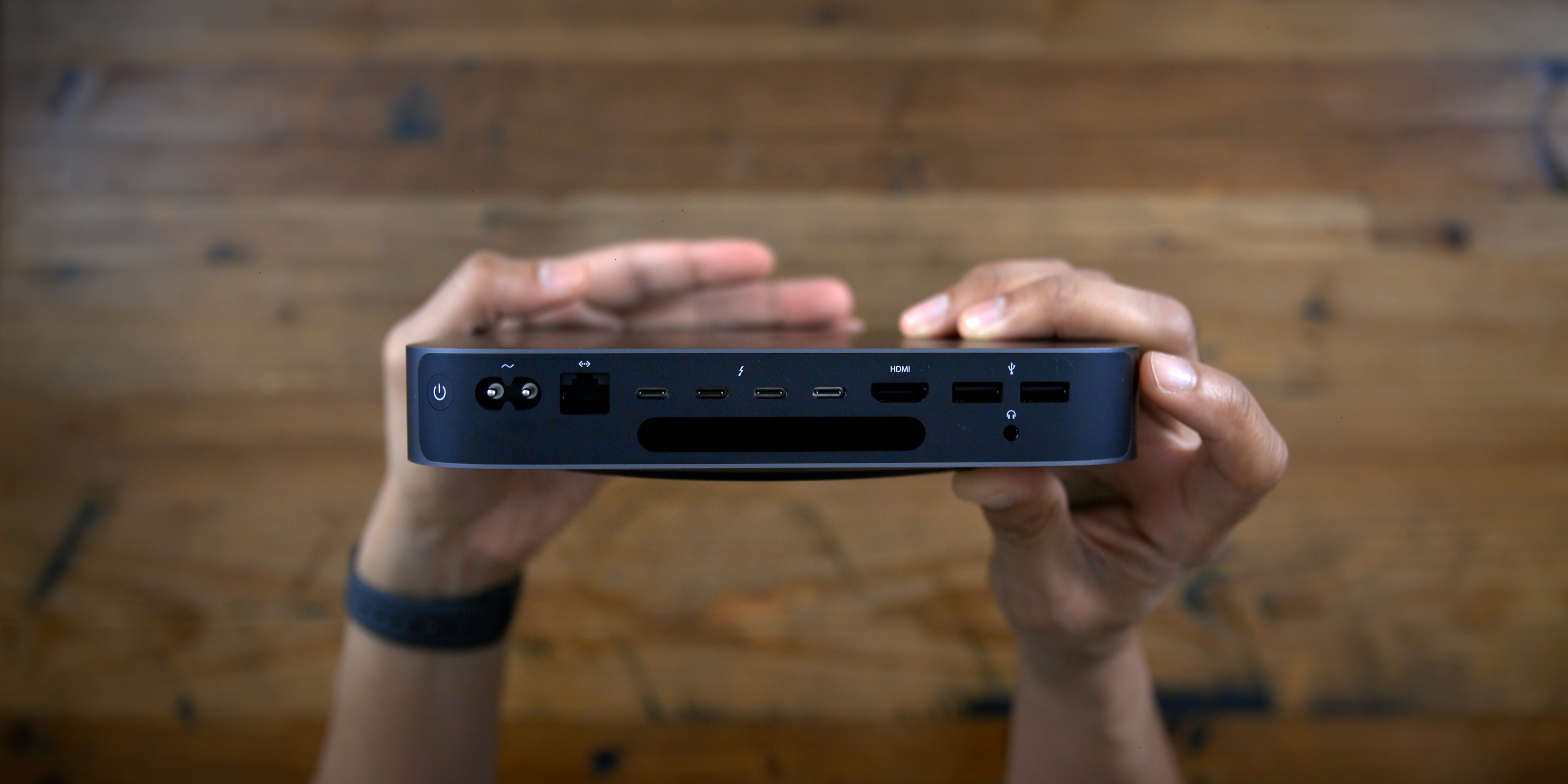 Because the Mac mini has four Thunderbolt 3 ports, with pairs of ports each occupying a single Thunderbolt 3 bus, there’s plenty of logical and physical room for expansion. In my current setup I have the following Thunderbolt 3 devices connected to my 2018 Mac mini:

That’s a total of four Thunderbolt 3 devices, with the Blackmagic eGPU Pro featuring a second Thunderbolt 3 port that allows me to daisy chain the Pro Display XDR at full 6K resolution. 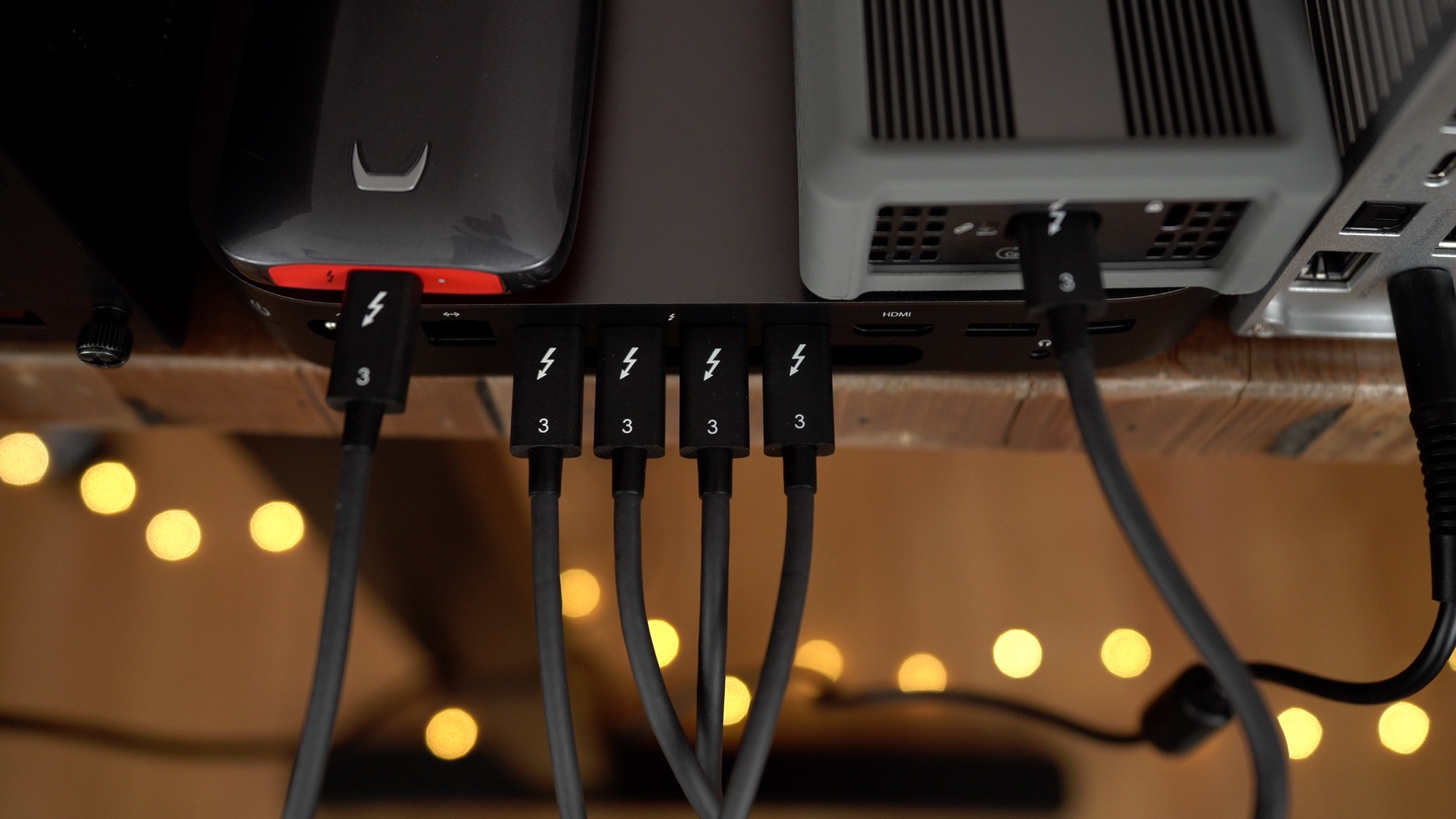 This leaves me with one additional Thunderbolt 3 port available should I need it. Eventually, I’d like to get a chassis with a second Thunderbolt 3 port for my 24TB Amfeltec Squid PCIe SSD. I’m using the Razer Core X temporarily until I acquire a more suitable enclosure for the 24TB PCIe SSD.

10GbE is a nice luxury

I connect directly to my Synology NAS to back up and pull archived 9to5Mac videos via 10GbE, which is much quicker than a Gigabit connection and saves me lots of time waiting on file transfers. 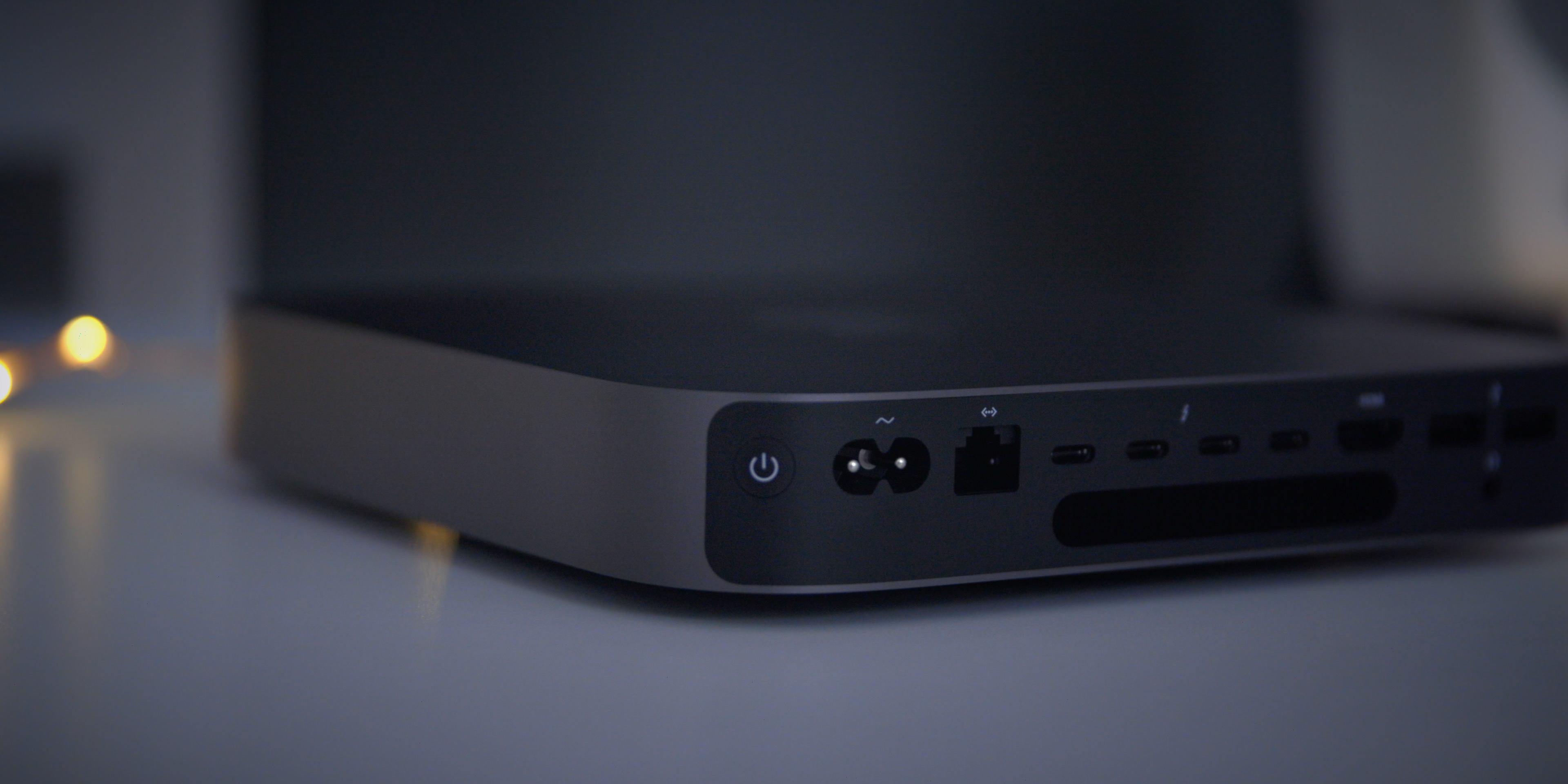 Although not totally necessary with so many great 10GbE Thunderbolt 3 adapters available, if you can splurge for the 10GbE build-to-order option on the Mac mini, you should definitely get it.

Having built-in 10GbE means not having to occupy another Thunderbolt 3 port with a 10GbE adapter should you need it. And when you consider that the 10GbE option is only $100 more on the Mac mini, and most adapters cost around that much, it seems like a pretty good deal.

If you are planning on buying a Mac mini, here is the configuration that I recommend:

This configuration will set you back $1199 but features a much faster CPU and 10GbE connectivity. It also includes 256GB of flash storage by default, instead of the paltry 128GB that used to come with this configuration.

From there, I recommend a DIY memory upgrade, using third-party memory that you can acquire at a much better price via Amazon.

Lastly, you should consider an eGPU, because if you’re doing anything that involves graphics on the Mac mini, you’re going to be extremely disappointed with the performance of the integrated graphics. 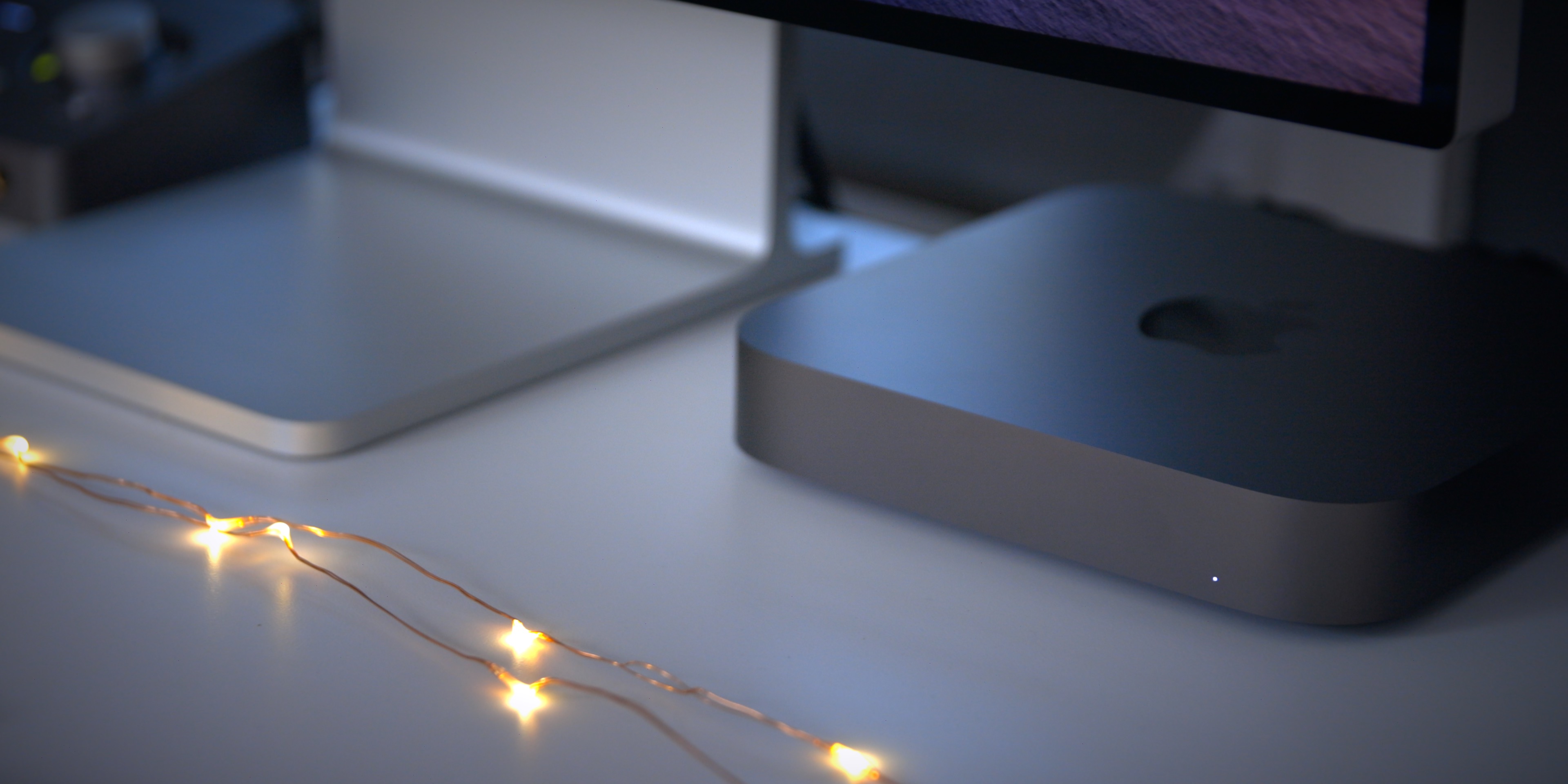 As mentioned, you don’t have to splurge for the Blackmagic eGPU Pro if money is tight, you can always go for some other cheaper eGPU solution by purchasing the external chassis and graphics card separately.

To get the best performance out of your Mac mini, expect to invest in additional RAM and external graphics. With those two additions, the Mac mini transforms from just an okay machine to a machine that performs more like a baby iMac Pro. Of course, it lacks the display found in the iMac Pro, but the beauty of the Mac mini is that you can pair it with a display of your choice. 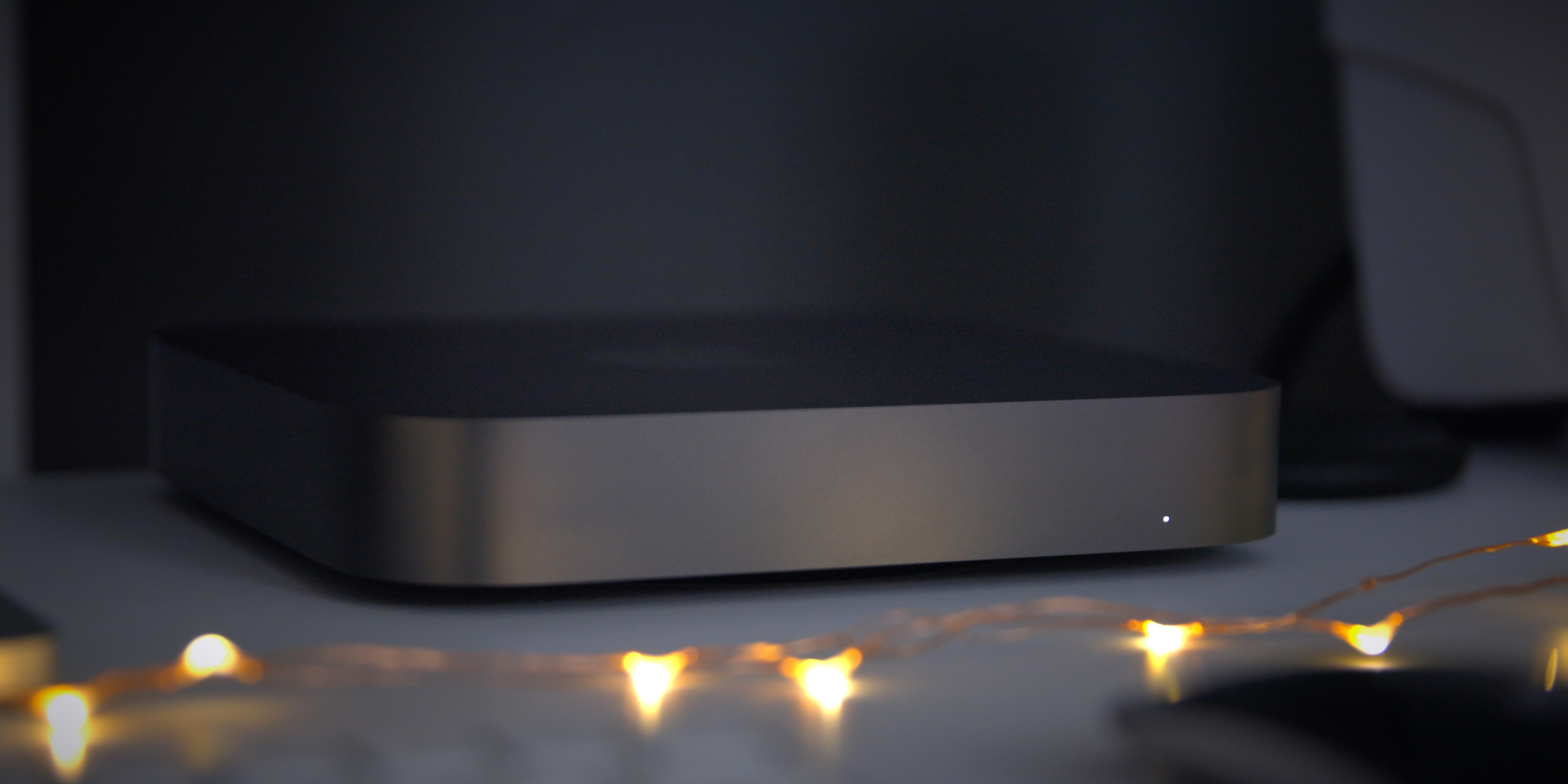 The 2019 Mac Pro might be the best Mac desktop ever by a long shot, but the Mac mini is the best value desktop Mac, and it remains my favorite desktop Mac to this day. Although I look forward to an eventual CPU upgrade, the 2018 Mac mini, when properly specced, makes for a good workhorse machine for tasks like video editing with Final Cut Pro X.

What do you think about the Mac mini? Do you use one? Sound off down below in the comment section with your thoughts and opinions.