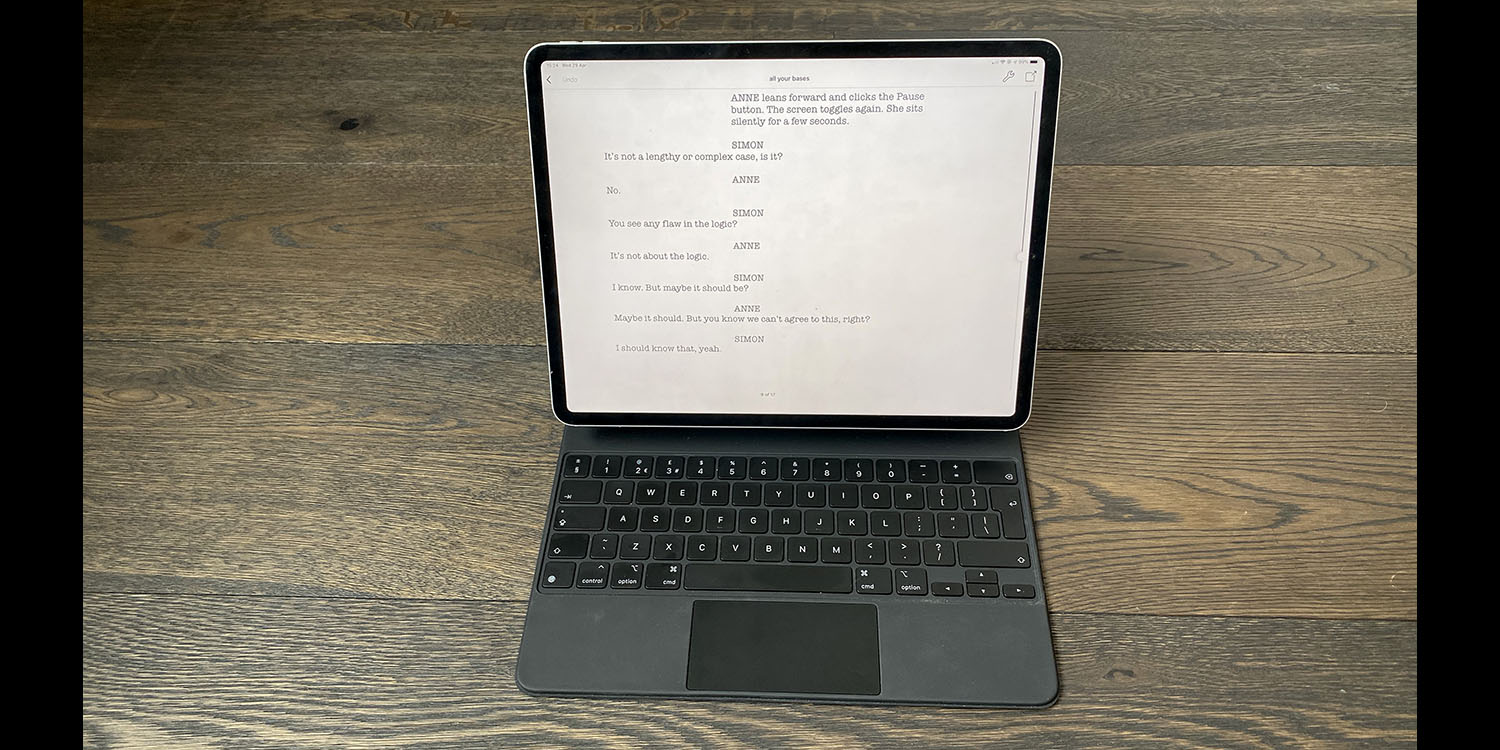 I said in my two previous pieces on Apple’s Magic Keyboard for the iPad that it’s not a perfect product.

It’s really expensive, and that fact isn’t reflected in the look and feel of the cover. There’s no Escape key, and no functions keys. The screen angle doesn’t quite go back as far as I’d ideally like. It’s not quite as stable on my lap as I’d like.

But I also said something else …

I think there is very little doubt that I’ll be keeping it.

The weaknesses are not deal-breakers

The lack of style and premium feel … well, it’s disappointing, but doesn’t really factor into my decision. I wouldn’t buy something I found ugly, but this isn’t: it’s just ordinary-looking.

Several readers pointed out that the Escape key problem is easy to solve: just remap a key that I don’t need. And fortunately, as a depressingly mono-lingual person, there is one: the globe key. I now have that mapped as an Escape key.

So far as the function keys are concerned, Apple had a choice. It could either make the keyboard exactly the same size as the one on the 16-inch MacBook Pro, or it could shrink them enough to allow room for half-height function keys without them falling beneath the overhang of the iPad in the most reclined position.

Personally, I think I could have happily lived with slightly smaller keys, but that was a judgment call, and I do understand the decision Apple has made here. Given I don’t often play music on my iPad, I can live with on-screen brightness and volume controls.

The screen angle is only an issue in one very specific situation, and it’s not a big deal then, so that’s not really a factor.

Laptop stability is good enough for decent typing, and most of my mobile use is coffee shops, trains, and planes – all environments where I have it on a table. So again, no biggie.

All of which means that the weaknesses are relatively trivial, while the three strengths are powerful ones.

The strengths are compelling

First, and most importantly, the typing experience is really, really good. I still think it’s not quite up there with the 16-inch MacBook Pro, but it is very, very close. This is a great keyboard to use, and that impression hasn’t changed after writing some relatively lengthy pieces on it.

Second, the ease of attachment and detachment. This is a huge advantage over the Brydge keyboard. I really can’t overstate the benefit of this. Previously, I would tend to leave the keyboard attached more often than it was needed, simply because it was a pain to detach it for two minutes and then re-attach it. With the Magic Keyboard, that takes literally a second and zero effort. So it’s a tablet when I need a tablet, and a laptop when I need a laptop.

Third, the trackpad really works well. One week in, it feels just as natural and intuitive as using a MacBook. I did wonder whether the small size would feel cramped. It did a little at first, but adjusting the tracking speed solved that. You can choose between ten speeds, and I have mine set to nine (ten felt just a little too quick). That done, it works incredibly well.

The bottom line is that it costs a lot of money but adds a lot of value to the iPad.

With the keyboard attached, it really does feel similar to a MacBook. Sure, it’s not a complete substitute. I love the 16-inch screen of my MacBook Pro. I love proper windowing. I really love a proper filesystem. Put both devices in front of me when I have work to do at home, and I’m going to chose the MBP every time.

From a writer’s perspective, the iPad with a decent keyboard attached has long been an ok solution. The platform is now a grown-up one. There’s Scrivener for iPad. There’s Final Draft. There’s good enough windowing for a typical writer’s needs, which is to have reference material (notes or browser) in one window and copy in the other.

But the one huge weakness was editing by finger. Getting an accurate insertion point was awkward, and moving chunks of text around was painful. Carrying around a trackpad (I’m not a mouse guy) would have been even more so.

Having a built-in trackpad means that the editing experience is now on a par with the Mac. That’s a really big deal to me, and one that justifies the admittedly steep price. My decision is made.