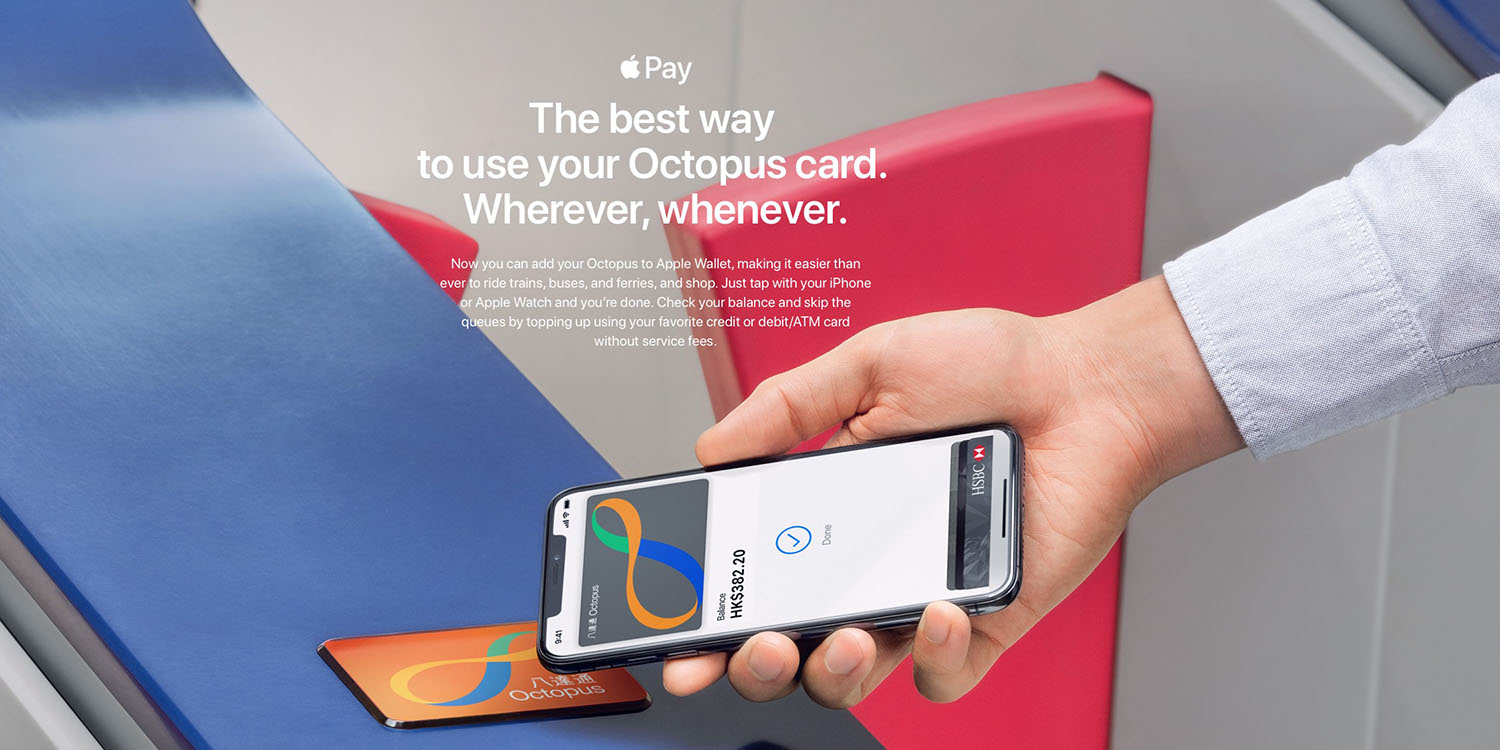 Your iPhone or Apple Watch is now your Octopus.

Octopus on iPhone or Apple Watch simplifies the way you ride transit and shop. Breeze through the turnstiles or pay at the retail outlets just by tapping your iPhone or Apple Watch to the Octopus reader. No need to open an app or wake your device. Check your balance and skip the queues by topping up using your favourite credit/debit/ATM card, or from your bank account without service fees.

Octopus is available in Adult and Elder types, requiring a refundable deposit of HK$50, and has a stored value limit of HK$3,000.

You can use it on an iPhone 8 or above, or an Apple Watch Series 3 or above.

Octopus supports Express Transit, so you don’t need to unlock your iPhone or double-press the side button on an Apple Watch: just hold your device close to the reader.

You can top up using your favourite credit or debit/ATM card without service fees anytime, anywhere using either the Octopus App, Wallet app or Watch app on your iPhone or Apple Watch. And just like with your physical card, you can still add funds to the Octopus on iPhone or Apple Watch at the usual places with cash, reload with Automatic Add Value Service (AAVS) or from your bank account with Faster Payment System (FPS) transfer set up in Octopus App.

We first learned it was coming almost a year ago, with confirmation the following month and more details emerging in September. However, while it was promised for later the same year, it has only finally arrived this week.

The company says you can transfer your physical Octopus card to Apple Pay.

If you have a physical Octopus card², you can transfer its remaining value, deposit, and most services (including Automatic Add Value Service) to your Octopus on iPhone.

However, Time Out notes that you may instead want to register a new one.

Users will be able to purchase a new virtual Octopus card directly from the iOS Wallet app. You might want to do this instead of transferring your current Octopus because once you transfer your Octopus to Apple Pay, your physical card will be rendered unusable and the process cannot be reversed. It might be handy to keep your card around for those times when your battery is drained or when you don’t have your phone on you.

Express Transit does make running out of battery power less likely, as it will continue to work in low-power mode, but it’s still reassuring to have a physical card as a backup. Additionally, there have been reports of the transfer failing in such a way that the Apple Pay card is not activated but the physical card ceases to work.

Also heard of issues with transferring cards, might wanna mention it. Long lines at MTR stations because the physical card would get disabled but the virtual one wouldn’t activate pic.twitter.com/5wFggAkv21

Apple also has a microsite with more information.