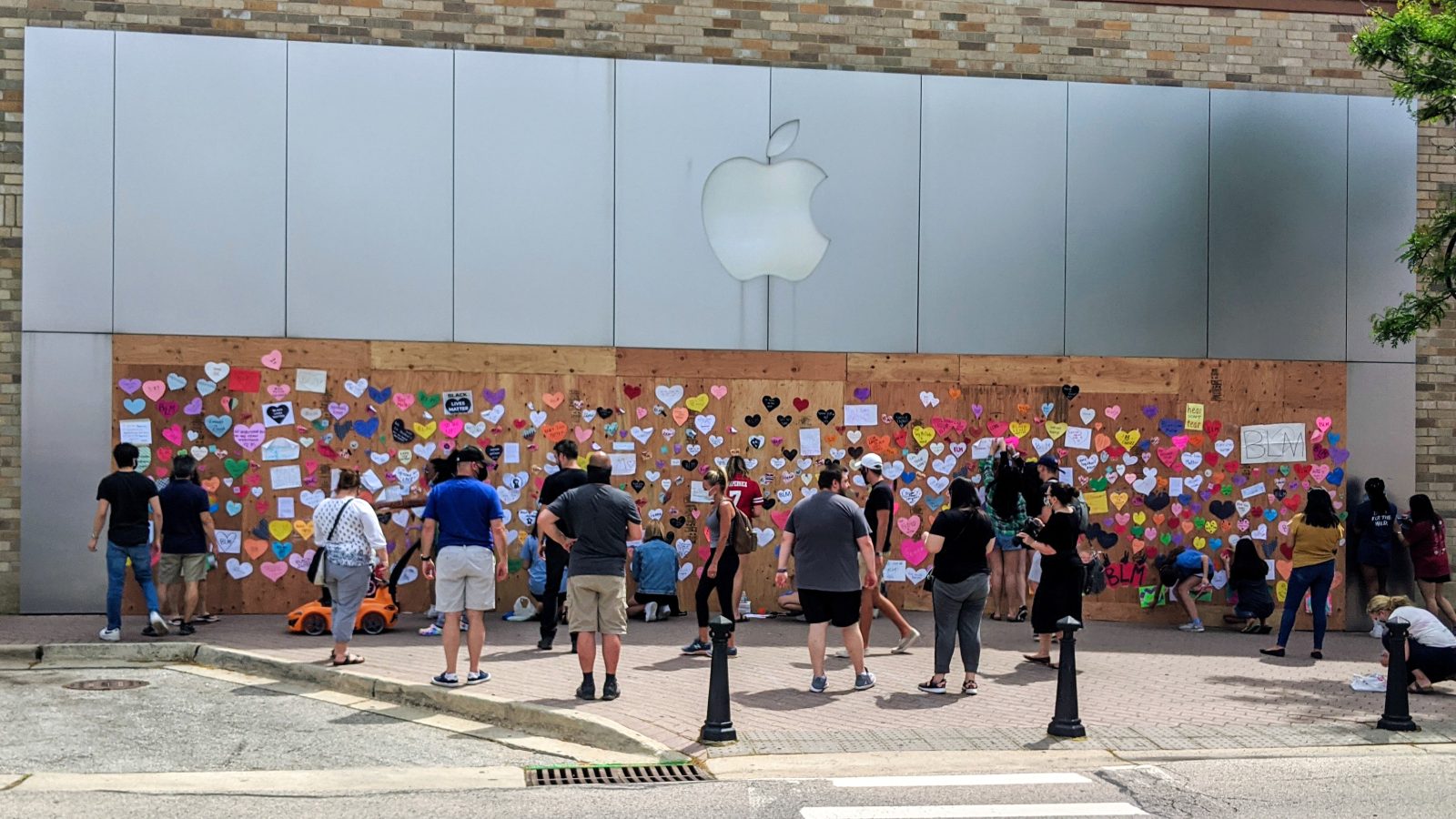 Activism sparked by the death of George Floyd in Minneapolis has spread across all 50 US states. Apple Stores have been swept up in the momentum, looted and vandalized as some protests turned to violence. Now, some peaceful protestors are reimagining the boarded up windows of Apple Stores as canvases for a positive message.

Between the evenings of May 27 and June 1, more than a dozen Apple Stores across the US were looted or significantly damaged as violent opportunists co-opted Black Lives Matter protests. Looters even vandalized Apple Carnegie Library at Mount Vernon Square, D.C.’s first desegregated public building and frequent host of artists in the Black community through Today at Apple sessions.

For the safety of employees and customers, Apple closed the majority of its reopened US stores and boarded up dozens of locations to protect from further damage. Apple’s glass storefronts are icons on the main streets of cities across the country, and their stark shuttered look caught the attention of social media. Though trivial against a backdrop of injustice, once vibrant storefronts turned dark underscored the need for change.

The Apple Store’s got a bit more color to it #Portland pic.twitter.com/yPbTcegpgH

Over the past few days, communities of artists have taken over boarded up Apple Stores to promote peace over violence. In Portland, artist Emma Berger painted a mural of George Floyd and the words “I Can’t Breathe” on the wall surrounding Apple Pioneer Place, which was heavily damaged after looters descended on downtown. Berger said in an interview with KPTV that she is adding faces of other victims to the memorial as a reminder of ongoing racial violence.

In Naperville, Illinois, peaceful protestors have blanketed the facade of Apple Main Place with heart-shaped notes, each carrying a positive message about the Black Lives Matter movement. The store was targeted by looters who attempted to break in during a violent night in Naperville. Hearts first pasted on the plywood by teens were ripped down by bystanders, sparking a community outpouring of support. Shuttered businesses across downtown have been covered in hearts over the past day.

I learned a thing or two from my kids today and #Naperville youth.
They aren’t satisfied waiting for a change or recognition of injustice, they are doing it.
I’m learning a lot, actually. pic.twitter.com/vG6IkVmbGq

Artists showing solidarity on the west coast have painted a Black Lives Matter mural on the front of Apple Palo Alto, facing University Avenue. Others have added flowers to the impromptu memorial.

My local @Apple store, boarded up to protect from looters but creating a canvas for #peaceful #protest~#PaloAlto #GeorgeFloyd #BlackLivesMatter pic.twitter.com/KOh3ym7HaG

Apple hasn’t publicly commented on the lootings and vandalism aside from closing stores, but Deirdre O’Brien, SVP of Retail + People, extended her support to the Black community and Black colleagues at Apple. In a memo to employees, Tim Cook pledged that Apple will make donations to groups including the Equal Justice Initiative, and match employee donations two-for-one.

Update 6/4: Tim Cook has published an open letter titled “Speaking up on racism.” Another mural has popped up in Boston:

Outside the @Apple store on Boylston Street in Boston. #BlackLivesMatter #Boston25 pic.twitter.com/kBvecrfN0u