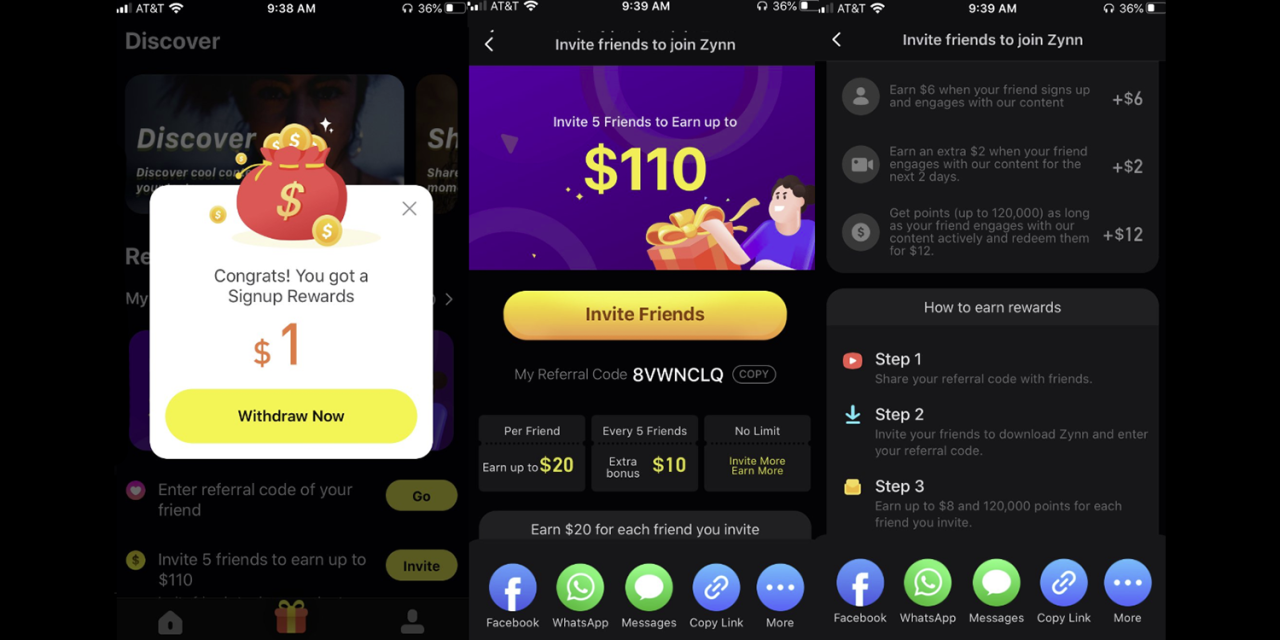 TikTok clone Zynn, which unexpectedly topped the App Store charts last month, has now been removed from both Apple and Google app stores after complaints of plagiarism and pyramid selling …

The app apparently rocketed to the top of the App Store by a mixture of well-funded promotion and a reward scheme which claimed to pay users to watch videos and refer friends.

If you download Zynn and sign up, one of the first prompts you’re greeted with is a pop-up that informs you that $1 has just been placed into your account. Refer a friend to Zynn and you’ll make $20 bucks. For every five friends you refer, you get an extra $10. Scroll through the Zynn video feed and you’ll also accumulate points which transfer into pocket change, adding to your monetary totals.

The pyramid structure would make it a completely unsustainable business model, and sure enough, there were soon complaints that the company made it next to impossible for users to actually get their hands on their claimed earnings.

A Wired report also found that Zynn stole or faked much of its content.

Zynn is filled with videos that appear to be stolen from creators on other social media platforms, including TikTok celebrities with massive followings like Charli D’Amelio and Addison Rae. Many of the clips are aggregated by accounts centered around a single theme, like “pranks.” Other videos appear on look-alike profiles impersonating individual creators. Four influencers who spoke to WIRED said videos they originally published to TikTok, Instagram, or YouTube were uploaded to Zynn without their consent, under accounts they didn’t open.

“I didn’t create this,” Max Mazurek, a Polish dancer and model with almost 190,000 TikTok followers, said after WIRED showed him a Zynn profile using his name. The account has nearly 25,000 followers and featured many of the videos Mazurek had previously uploaded to TikTok and other platforms. “It’s not my account. I can’t download this app in Poland,” he said.

The Verge reports that the TikTok clone has now been removed from both app stores.

Zynn, the Chinese video sharing app that’s a near button-for-button clone of TikTok, has been removed from Apple’s App Store. The app was previously taken down from Google’s Play Store last week […]

The app’s speedy rise and fall is part of a long-running battle between two Chinese tech giants: Zynn’s parent company Kuaishou, and ByteDance, parent company of TikTok. The two firms have been fighting for supremacy in China’s competitive video sharing market, and with TikTok’s sudden success in the West, the battle has spilled over into the US.

It now looks like, for now at least, the US battle is over.