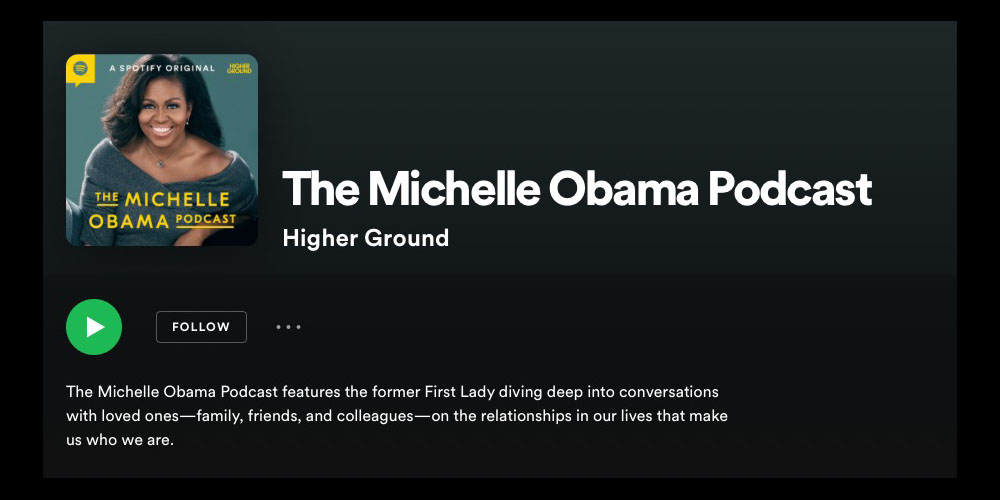 Spotify’s push into podcasting has seen the company take the aggressive approach of negotiating Spotify-exclusive podcasts that won’t be available on Apple Podcasts or elsewhere. The latest of these is The Michelle Obama Podcast, which will start on July 29 …

The Verge has some details on the upcoming show by the former first lady.

The company announced the show today, making it the first podcast to come out of Spotify’s deal with the Obamas’ production company, Higher Ground Productions. The show premieres on July 29th, and new episodes will come out weekly for nine weeks.

The show will explore important personal relationships and how they shape people. Initial guests include fellow podcast host Conan O’Brien, Valerie Jarrett (a former advisor to president Barack Obama), and Marian and Craig Robinson (Michelle’s mother and brother). The show, while available to both free and Premium Spotify users, will feature ads from Tide, Dawn, and Salesforce […]

Michelle’s show will likely be a popular one given that her memoir sold 10 million copies in the first five months alone. This could be a show that brings people over to Spotify specifically for podcasting because it’s a new voice in the space.

Spotify currently has a two-minute trailer for the show.

The launch date means that it will happen ahead of another big deal announced back in May: the acquisition of The Joe Rogan Experience. That show will be available on Spotify from September 1 before leaving Apple Podcasts to become a Spotify-exclusive podcast at the end of the year. Rogan’s deal was said to be worth more than $100M.

Apple isn’t expected to sit back and watch; Bloomberg reported in May that Apple Podcasts will also go down the exclusives route, though the company’s focus will be on existing and potential Apple TV+ shows.

The trend toward exclusive podcasts is polarizing views. Some are unhappy at the trend, believing that a strength of the podcast medium is that it is both platform- and device-agnostic. Others argue that Spotify shows will be available to a wider audience given the range of supported devices, and the fact that the exclusives are ad-supported and available to free as well as paid users. There is, however, no guarantee that this will remain the case: Spotify would hardly be the first company to use free access to draw people in, then require payment for continued access.