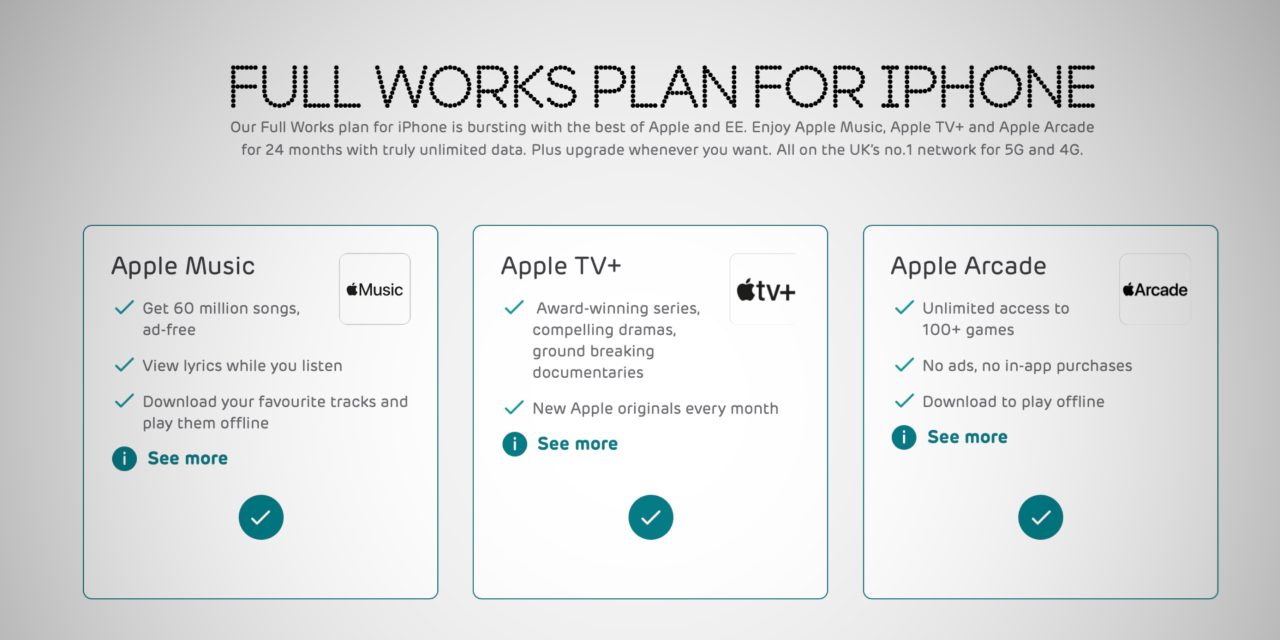 The new Full Works plan offers three add-on options, allowing EE customers access to all of Apple’s content services (except News+) at no additional charge beyond the price of the plan. Lower tiers allow EE subscribers to select one as a ‘free’ benefit.

EE is generally a premium option in terms of cost, but they are the UK’s biggest carrier. This new Apple partnership brings cost savings for EE customers.

The Full Works package offers an iPhone 11 Pro with unlimited data, unlimited calls and texts, Apple Music, Apple TV+ and Apple Arcade for £77 per month. The same plan without the bundled services costs £68, so you are saving about £11 monthly compared to buying the services directly from Apple. (Although there is talk of Apple bundle discounts on the way, right now it would cost an individual £20 a month to get Apple Music, Arcade and TV+ a la carte.)

The unlimited single add on plan is £73 a month, or £5 more than the baseline. In that case, you are only saving money if you opt for Apple Music — normally £9.99 per month. TV+ and Arcade cost £4.99 a month on their own anyway. If you don’t need unlimited data, you can get the 10 GB EE Smart iPhone Plan for £66 monthly.

These plans include the flexibility to trade in their phone and get a new iPhone at any time, which will come in handy as the iPhone 12 is set to launch within two months. EE is one of the UK’s leading carriers for 5G coverage and it will certainly be preparing to capitalize on the impending 5G iPhone hype.

As Apple has invested more heavily on its own services offerings, it has made many carrier partnerships such as the inclusion of Apple Music with Verizon unlimited plans. EE previously offered six months of Apple Music with its phone contracts. When the ‘Apple One’ bundle arrives, Apple will likely partner with carriers to include that in phone plans directly as well.