Apple Watch Series 6 review: Should you buy it over the SE or Series 3? [Video] 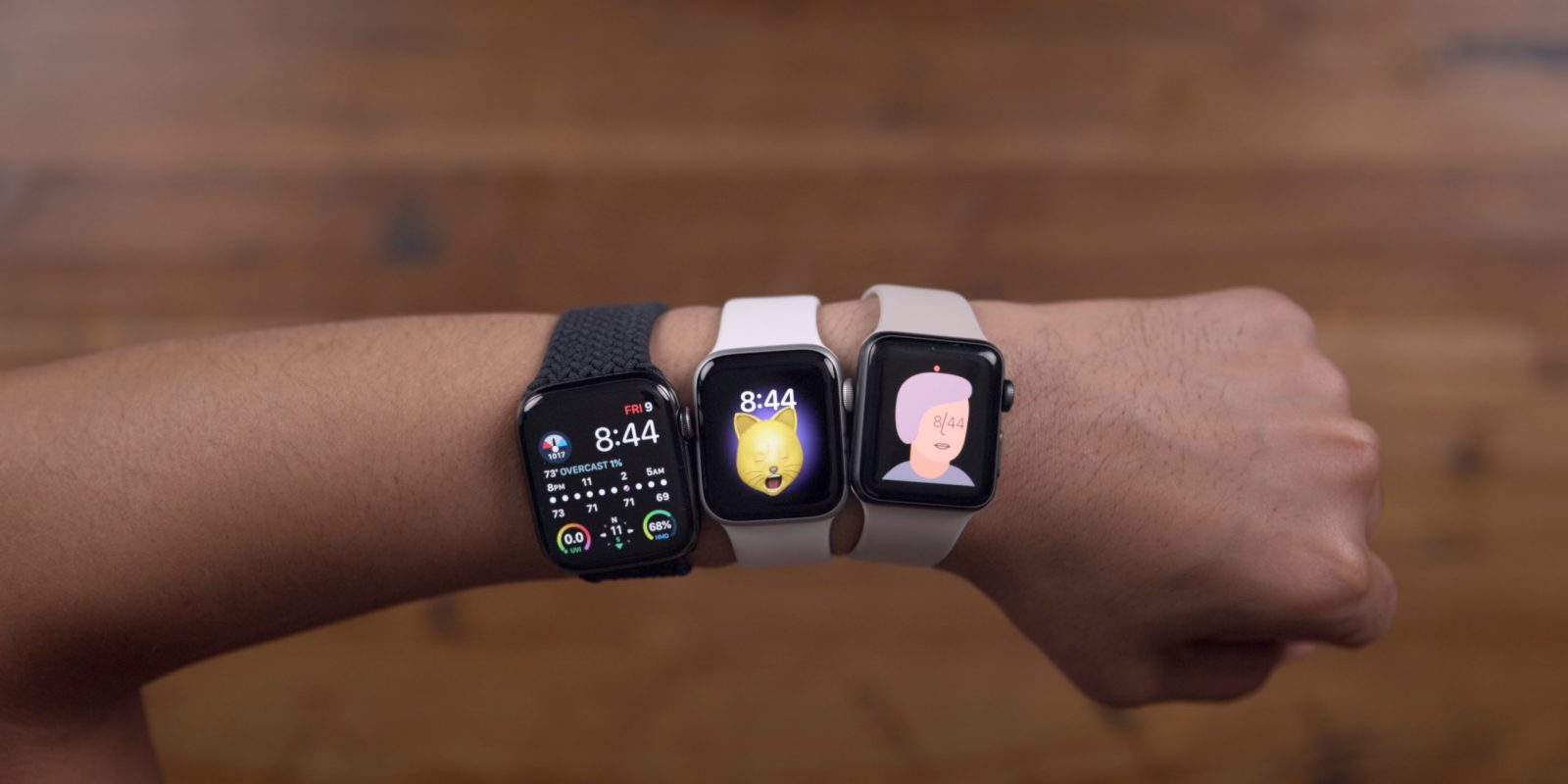 With these options in mind, which Apple Watch should you buy? Should you go all out and spring for the Apple Watch Series 6, or should you take the more cost-conscious route with the Series 3 or SE? Watch our hands-on video walkthrough as we explore Apple’s wearable lineup as it stands today.

Speaking as someone who’s owned every single Apple Watch since its debut back in 2015, if you’re considering the purchase of a new Apple Watch, I recommend avoiding the Apple Watch Series 3. While it was the first Apple Watch to ship with cellular connectivity, the Series 3 looks and feels outdated in 2020.

For starters, Apple no longer sells Series 3 models with cellular connectivity. If you’re someone who likes the idea of staying connected with your Apple Watch while away from Wi-Fi and your Bluetooth-paired iPhone, remove the Series 3 from your consideration.

Most importantly, Series 3 is stuck with the Apple S3 System in Package (SiP), which includes a relatively turtle-like 32-bit dual-core CPU. The Series 3 is usable, otherwise Apple wouldn’t still sell it, but the experience navigating around the OS is often hampered by lag and dropped frames.

Also included with the Apple Watch SE is an always-on altimeter for measuring elevation. This feature, which gives SE users something that last-generation Series 5 users lack, paves the way for a new Altitude complication on the watch face.

Like the Apple Watch Series 3, users don’t have a large variety of case colors or finishes to choose from. The Apple Watch SE does have a gold aluminum case option not offered on the Series 3, but nothing beyond that. But unlike the Series 3, the SE can be configured during the build-to-order process with the new Solo Loop or Braided Solo Loop bands. More on these excellent new band options later.

The Apple Watch SE forgoes the ECG capabilities and the flagship Blood Oxygen measurement features of Series 6. Depending on your reasons for buying an Apple Watch, you may deem those wellness-related features to be expendable.

In my opinion, the biggest downside between the Apple Watch SE and the Apple Watch Series 6 is the lack of the always-on display offered on the more expensive model. Debuting with last year’s flagship fifth-generation Apple Watch, this lets the display stay on perpetually, allowing you to quickly tell time without awkwardly raising your wrist.

Although I don’t consider the always-on display to be an absolute necessity for every user, now that I’ve experienced it for the last year, it’s a luxury that I wouldn’t want to go without. In fact, if you can find a used Apple Watch Series 5 in good condition, it might be the more desirable option for those wanting the always-on display.

The Apple Watch Series 6 is the only new watch that Apple sells that can be configured in a variety of aluminum (blue and red!), titanium, and stainless steel finishes. It’s the watch that will garner you the most customization options with regard to case finish and band choice.

As I explained in my Apple Watch Series 5 review, having an always-on display makes the Apple Watch feel more like a normal watch. It allows you to simply glance down at your wrist to learn the time and gather information from watch face complications.

The S6 SiP inside the Apple Watch Series 6 is based on the A13 Bionic in iPhone 11, and can thus run up to 20% faster than its predecessor. Although it doesn’t provide the same shot-in-the-arm-like boost as the jump from Series 3, the speed increase results in slightly faster app launches and restarts.

While there’s no widespread application for it now, Series 6 comes with an embedded U1 chip and Ultra Wideband antennas. That’s the same chip found in the iPhone 11 for short-range wireless connectivity to support features like next-generation digital car keys.

Apple Watch Series 6 also sports an up to 2.5x brighter screen. While in sunlight with your wrist down, the screen gets brighter to make it easier to passively view the contents on the always-on-display.

Of course, the big new feature for Series 6 is the inclusion of a Blood Oxygen Sensor and corresponding Blood Oxygen app. Oxygen saturation (SpO2) represents the percentage of oxygen being carried by red blood cells from the lungs to the rest of the body. Blood Oxygen measurement is made possible by a new Apple Watch Series 6-exclusive sensor.

The sensor uses four clusters of green, red, and infrared LEDs, in addition to the four photodiodes on the device’s rear crystal to measure light reflected back from blood. The Blood Oxygen app then uses this data to measure levels between 70 percent and 100 percent.

On-demand SpO2 readings are possible by launching the Blood Oxygen app, but passive readings will also take place while the wearer is sleeping. All measurements are stored inside the Health app for further tracking and analysis.

Unlike the ECG features, which is also exclusive to the Apple Watch Series 6, the Blood Oxygen measurement capabilities have not been FDA approved, and its accuracy has been debated.

Apple clearly states that Blood Oxygen measurements are not intended for medical use, but it notes in its marketing materials that such a feature provides further insight into overall well-being. Translation: blood oxygen measurements are for entertainment/informational purposes only, and should not be used to diagnose health issues.

I think helping users stay aware of their well-being can only be a good thing, and as the technology grows, it may actually be lifesaving. That being said, I wouldn’t buy the Apple Watch Series 6 because of the Blood Oxygen sensor, as this technology will undoubtedly get better in future hardware and software revisions.

Alongside the release of the Series 6 and SE, Apple unveiled two new noteworthy band options — the Solo Loop and the Braided Solo Loop. Both bands are totally devoid of clasps or buckles for a super-comfortable fit that’s easy to put on and take off.

The Solo Loop is like a stretchier and more pliable Sport Band, while the Braided Solo Loop is comprised of recycled yarn and silicone threads. Both bands attach to the Apple Watch forming a continuous loop, and both require the wearer to stretch the band over their hands to put on and take off.

There are questions about the durability of these bands after prolonged usage, but so far so good. As long as you make sure you order the proper size, and Apple has recently made measuring easier, you’ll be good.

While I’m especially fond of the Braided Solo Loop, particularly the look and feel of the material on my wrist, I’m a fan of how simple both bands are in general. Not having to deal with clasps and buckles resonates with me, because it’s so easy to put on and take off while increasing the comfort of prolonged wear.

Be sure to read and watch our full watchOS 7 top features breakdown to learn more.

If you’re coming from an Apple Watch Series 5, a watch that Apple no longer sells, then I’d definitely recommend sticking with it for at least another generation. While the Series 6 blood oxygen sensor and some of the other enhancements are nice, it’s not yet worth the upgrade in my opinion. With the Series 5, you have a fast watch with an always-on display, so it’s an even better watch than the Apple Watch SE if you ask me.

Have you, or are you planning on upgrading your Apple Watch? Are you a first-time Apple Watch user? What do you think about the Apple Watch SE and Apple Watch Series 6? Sound off down below in the comments with your thoughts.