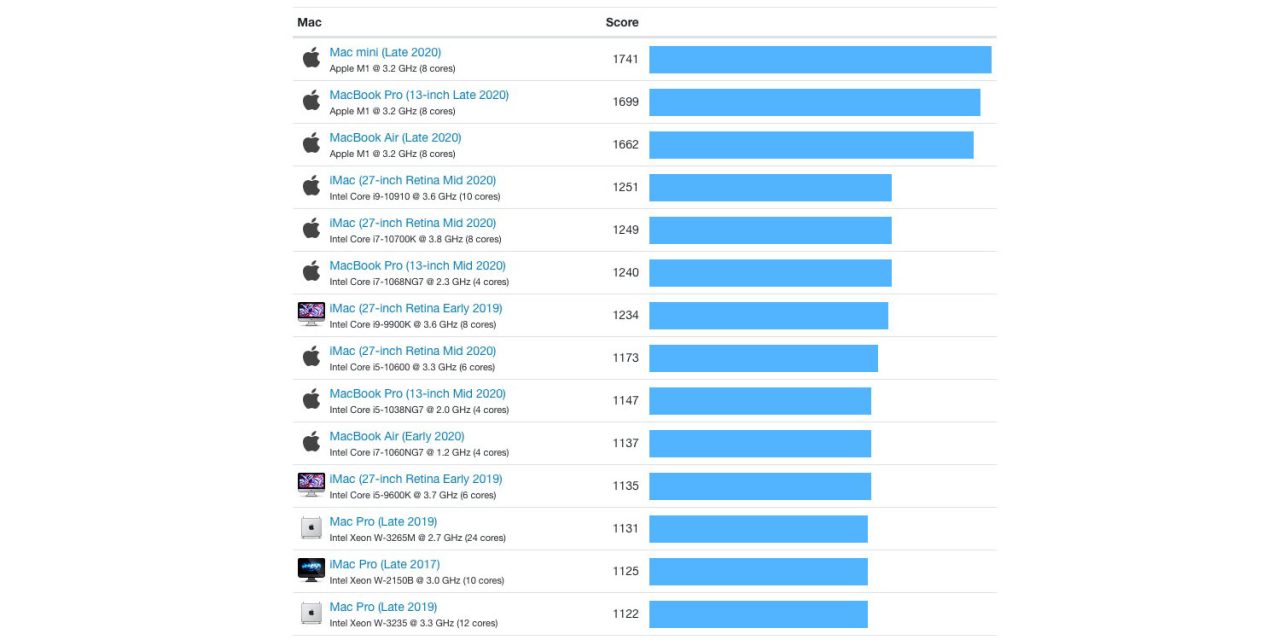 New Geekbench scores show that the 2020 Mac mini with M1 chip is faster than every Intel Mac in single core tests, even though the benchmarking app is running under the Rosetta 2 emulator. The M1-powered MacBook Pro and MacBook Air take second and third places.

There are some important riders to note, however …

The new Rosetta 2 Geekbench results uploaded show that the M1 chip running on a MacBook Air with 8GB of RAM has single-core and multi-core scores of 1,313 and 5,888 respectively. Since this version of Geekbench is running through Apple’s translation layer Rosetta 2, an impact on performance is to be expected. Rosetta 2 running x86 code appears to be achieving 78%-79% of the performance of native Apple Silicon code.

Despite the impact on performance, the single-core Rosetta 2 score results still outperforms any other Intel Mac, including the 2020 27-inch iMac with Intel Core i9-10910 @ 3.6GHz.

All of which is both true and incredibly impressive. However, three things need to be noted to put the results into context.

First, the rankings change significantly when running multi-core tests. There, the late-2019 Mac Pro tops the charts, and the M1-powered Mac mini drops down to 13th place behind other Mac Pro models, the iMac Pro and iMac models back to late 2019.

Second, Rosetta 2 is able to achieve impressive speeds for many apps as it is able to fully translate them before you run them. That isn’t true of all apps, so things like video encoding will be significantly slower. That’s not a problem with Final Cut Pro, as that will run natively on M1 machines, but would be an issue with apps like Adobe Premiere Pro, at least for now.

Third, while the MacBook Air takes third place here, its fan-less design means that it will hit thermal limits under sustained heavy loads, so will drop down the rankings in real-life use. Improved cooling also means that Mac Pro models will be able to maintain their performance longer than the M1-powered Mac mini.

All the same, it does bode very well for the future of M1-powered Macs, and it’s likely that the first M1-powered 16-inch MacBook Pro will be significantly faster than the 13-inch models.