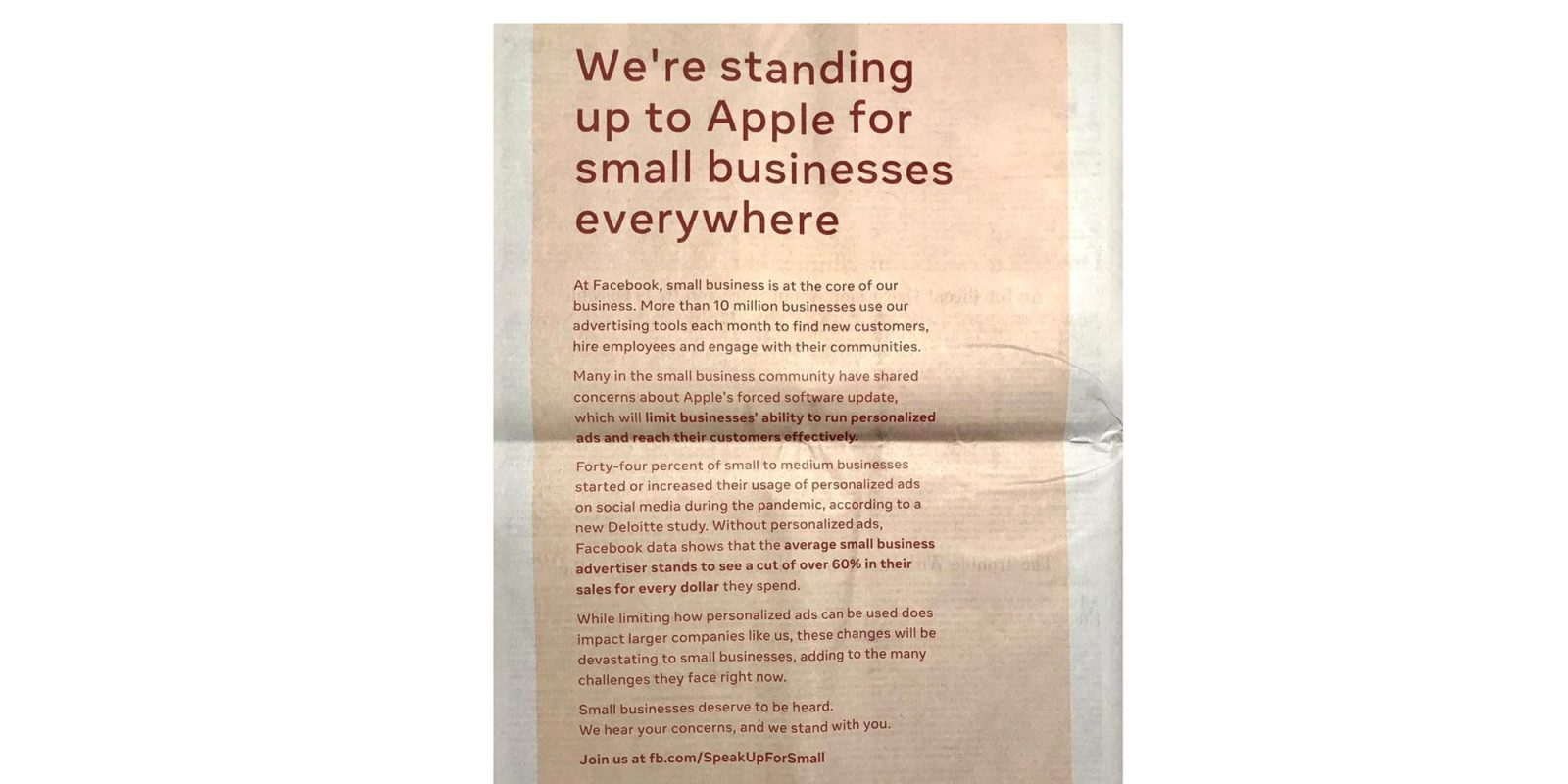 We’ve seen Facebook attack Apple repeatedly of late, but the company is today really upping the ante by running full-page ads in at least three US newspapers.

Update: Facebook has published a blog post with more details. It also says it will back Epic Games in its ongoing legal battle over the App Store.

Bloomberg reports, and The Verge got a copy of the ad, above.

The ads, slated to run in the New York Times, Wall Street Journal and Washington Post, carry the headline “We’re standing up to Apple for small businesses everywhere.” They home in on upcoming changes to Apple’s iOS 14 operating system that will curb the ability of companies like Facebook to gather data about mobile users and ply them with advertising.

The attack relates to the fact that iOS will next year force apps to ask for permission if they want to use ad-tracking. It’s expected that most users will refuse, which will mean apps won’t be able to easily offer personalized ads. Ads reflecting user interests earn more money for app developers than generic ads.

The change will significantly impact Facebook, as the ads it carries in the app will be worth less. The social network claims, however, that it doesn’t have its own interests in mind: it is instead standing up for small businesses.

We’re standing up to Apple for small businesses everywhere

At Facebook, small business is at the core of our business. More than 10 million businesses use our advertising tools each month to find new customers, hire employees and engage with their communities.

Many in the small business community have shared concerns about Apple’s forced software update, which will limit businesses’ ability to run personalized ads and reach their customers effectively.

Forty-four percent of small to medium businesses started or increased their usage of personalized ads on social media during the pandemic, according to a new Deloitte study. Without personalized ads, Facebook data shows that the average small business advertiser stands to see a cut of over 60% in their sales for every dollar they spend.

While limiting how personalized ads can be used does impact larger companies like us, these changes will be devastating to small businesses, adding to the many challenges they face right now.

Small businesses deserve to be heard. We hear your concerns, and we stand with you. Join us at fb.com/SpeakUpForSmall

This is an unconvincing tack the company has taken before. Back in October, CEO Mark Zuckerberg made the claim while warning investors of the likely hit to its own ad revenues.

It follows the company yesterday taking a swipe at Apple in a statement to Reuters about planned European legislation known as the Digital Markets Act (DMA), which would force Apple to offer a more level playing field between its own apps and third-party ones.

“We hope the DMA will also set boundaries for Apple,” a Facebook spokesman said. “Apple controls an entire ecosystem from device to app store and apps, and uses this power to harm developers and consumers, as well as large platforms like Facebook,” he said.

Some are suggesting that Facebook is trying to divert attention from its continuing privacy woes over its spyware app pitched as a free VPN service. Reuters reports that Australia plans to fine Facebook over the app.

Sources close to Apple tell us the company is not opposed to ad-tracking, but simply wants it to be transparent to users.