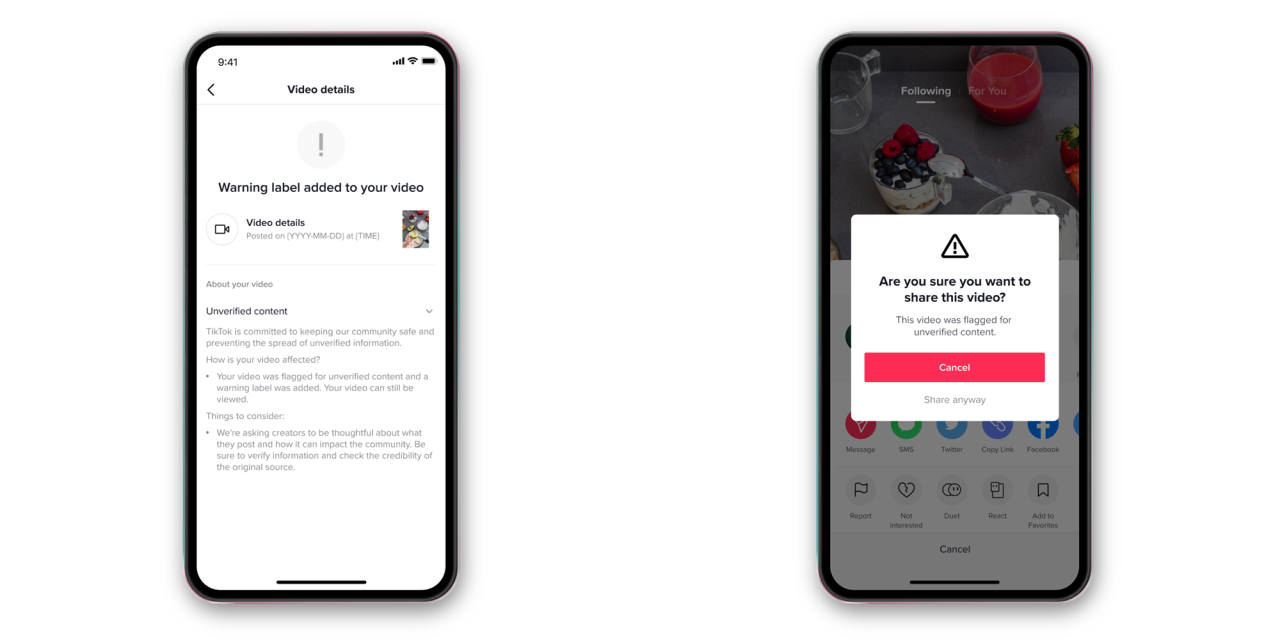 TikTok fact checks have been strengthened, the company has announced. The social network already asks third-party organizations to carry out fact checks on widely forwarded videos, removing ones found to be making false claims. It will now take things up a notch.

Where videos fall into a gray area – claims which can neither be verified nor debunked – it will flag them, taking steps to limit visibility…

The app will begin warning users before they share videos with unverified info. The update is meant to address a kind of gray area in the fact-checking process: claims that fact checkers are unable to verify.

With the update, users who try to share a video that’s been flagged as unsubstantiated by the app’s fact checkers will see a pop-up saying “this video has been flagged for unverified content.” They’ll still be able to go ahead and share it if they wish, but the video won’t appear in other users’ For You page. TikTok will also notify the person who originally shared the video that their post has been flagged.

TikTok is hoping the prompt will encourage “a pause for people to consider their next move before they choose to ‘cancel’ or ‘share anyway.’” The company says early tests of the warnings have reduced sharing by 24%.

Social networks generally have come under fire for failing to do enough to prevent the spread of both disinformation and hate speech. Hoax information about the integrity of the recent US presidential election led to the attempted coup at the Capitol, which resulted in five deaths.

TikTok has been upping its game on the social responsibility front, last month announcing significant improvements to privacy protections for teenagers.

The biggest changes affect the app’s youngest users between the ages 13 and 15, who will now have their accounts switched to private by default. The change applies to new sign-ups as well as existing accounts that may have previously been set to public. The app is also changing the default setting for comments, which can now only be set to “friends” or “no one.”

Apple CEO Tim Cook recently condemned the business model of social networks, which prioritize engagement even if the material being viewed is false or malicious.

If a business is built on misleading users, on data exploitation, on choices that are no choices at all, it does not deserve our praise, it deserves reform.