On Apple’s 45th birthday, here are some of the most memorable moments in the company’s history 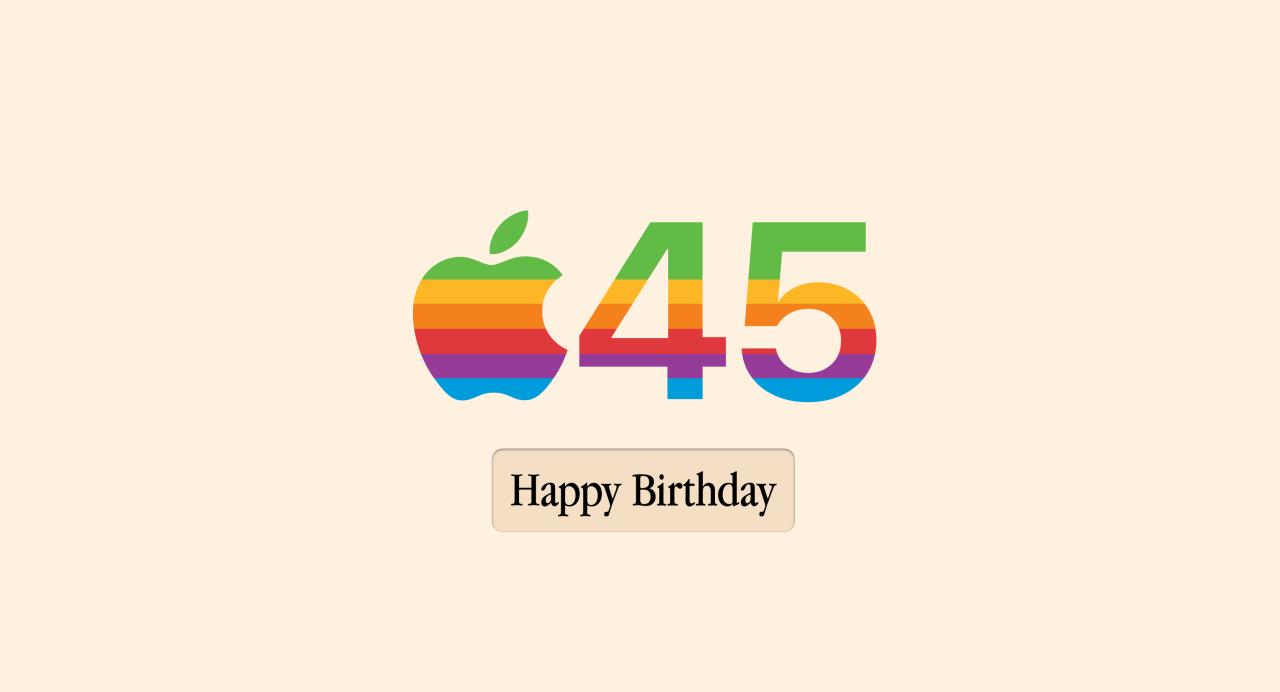 45 years ago today Steve Jobs, Steve Wozniak, and Ronald Wayne founded Apple Computer. Today it’s the most valuable brand on planet earth and is valued at more than two trillion dollars. It commands culture, cultivates creativity, and defies norms. It’s a company unlike any other. It’s easy to forget how we got here, so I periodically like to take a look back at Apple’s rollercoaster ride of a tapestry.

As a lifelong fan, Apple means the world to me. As a human being, it’s quite literally defined my life and the lives of billions of people. Apple enabled all of the companies that make the world go around. Usually, publications look back on product announcements that ended up changing the world. Instead, I wanted to spend some time looking back at special moments in Apple’s history that aren’t product announcements. From major events in the life of Steve Jobs to the most epic leaks, here are some insanely memorable moments in Apple history.

Today Apple has more than 500 stores all across the globe, but one store has always held a special place in our hearts. The Fifth Avenue Apple Store, often referred to as ‘The Cube’ has always been the most iconic of the bunch. It first opened its doors in Spring of 2006 to massive crowds that would keep coming back for every major subsequent product launch.

Steve Jobs himself was there with his wife Laurene and opened the doors for the very first customers. Also there was Ron Johnson, Apple’s head of retail at the time. That iconic photo of Steve looking up at the Apple logo you sometimes see, was taken on that day.

The Fifth Avenue Apple Store has been an important piece of Apple’s history. It’s Apple’s biggest landmark on the east coast and it’s a regular pilgrimage for Apple fans. Over the course of its almost 15 year life, it has been welcomed tens of millions of people. Apple loves to note that the store has welcomed more people annually than the Empire State Building or the Statue of Liberty.

May 30, 2007 | Steve Jobs & Bill Gates sit down with Walt Mossberg & Kara Swisher for a legendary interview

Walt Mossberg and Kara Swisher are well known for their legendary tech and business conferences All Things Digital and Code Conference. Steve Jobs was a regular guest at the conference back in the day, but in 2007 he sat down alongside Bill Gates with Walt and Kara to talk about their relationship and their two companies.

This was the first time since 1991 that the two men sat down together for an interview. The two had the chemistry of an old married couple, they made hilarious jabs at each other but also recognized the incredible achievements that each had made.

The day the App Store opened changed everything. On the first day it was open, the App Store only offered around 500 apps for iPhone and iPod touch. It debuted with apps like Twitterrific, the first Twitter client and games like Super Monkey Ball, one of the first real accelerometer-led games. The App Store instantly powered up the iPhone and the iPod touch. It breathed new life into iPhone OS and right from the start it was clear that it would turn out to be something big. I remember downloading iPhone OS 2.0 and installing apps like Bubbles, Super Monkey Ball and Remote for the first time.

The App Store has since become home to more than 2 million apps from developers all over the world. It has created entirely new industries and enabled entire billion dollar companies like Instagram and Uber. The App economy, as its sometimes referred to, has completely changed the way we live and work.

Apple has always been a target for leaks and rumors, but in April of 2010 Gizmodo landed one of the most important. Brian Chen, a reporter for Gizmodo, got his hands on an iPhone 4 prototype that an Apple engineer had left in a bar. I remember the moment the article went live and I devoured it. I’m sure many of you reading this did too.

The device had been hidden inside of a secure case that made it look like an iPhone 3GS. But that didn’t fool Gizmodo. After removing the case, Gizmodo discovered the entirely new glass and steel design. It also revealed the front-facing camera, the infamous antenna band, and it was running an internal beta build of iPhone OS 4.

It was clear at the time just from looking at it that the device was real. It was too detailed, too polished, and far too “Apple” for it not to be real. Sure enough, John Gruber over at Daring Fireball called around to his sources and learned that it had been lost by an Apple employee, and the company was eager to get it back. Unsurprisingly, Steve Jobs himself got involved in the situation and personally attempted to get the device back from Gizmodo.

Just a few months before he passed away, Steve Jobs presented his plans for Apple Park to the Cupertino City Council. He revealed its iconic ring shaped design and gorgeous landscaping. He explained how the company acquired the land that it now sits on as well and reminisced about the days when the land was just apricot orchards.

It is pretty fun to look back at this event and see the renderings of the campus nearly 6 years before it opened to the public for the iPhone X event in September of 2017.

October 5, 2011 | The world remembers Steve Jobs in the wake of his death

I remember the exact moment. I was standing in my living room, that day I had shadowed my cousin at his high school. My iPhone 4 buzzed. The CNN app showed a push notification saying that Steve had passed away. I broke down, my hero had died. As soon as I logged on, I saw much of the world feeling the same pain that I was. Immediately photos of makeshift memorials at Apple stores all over the world starting flooding the web. I still get chills and remember exactly how I felt that night looking at the photo of this fan at an Apple store crying below.

Tributes poured in from dignitaries and leaders. President Obama’s statement always makes me tear up:

The world has lost a visionary. And there may be no greater tribute to Steve’s success than the fact that much of the world learned of his passing on a device he invented.

I remember seeing the breaking news on TV for the first time and I remember waking up the next morning and seeing it be the top story on the Today show. A recording of that morning’s episode, dedicated to Steve, is still on YouTube.

Later in October, Apple held a special memorial service in the courtyard of Infinite Loop. It was led by Tim Cook, but speeches were given by many of Steve’s other friends as well. Two speeches in particular always get me. Jony Ive’s stories about traveling with Steve continue to be some of my favorite anecdotes that capture their relationship.

Bill Campbell, a tech veteran and member of Apple’s board also spoke. He broke down in tears remembering not only his colleague, but one of his very close friends. His speech reminds you that Steve was as much a regular person as anyone else.

In late 2012, Tim Cook fired Scott Forstall. It was a shocking event that came as a result of Forstall’s refusal to apologize for the botched Apple Maps rollout with iOS 6. Forstall didn’t mesh well with Apple’s other executives and Tim Cook was determined to build a team that worked together harmoniously. This gave him the opportunity to send Forstall packing. Little did we know at the time that this single move would completely change the course of Apple’s software development.

Craig Federighi took over iOS development and Jony Ive took over human interface design. The next major iOS update, iOS 7, completely stripped the platform of any skeuomorphic elements and Craig was careful to note that several times during his presentation at WWDC 2013. Design is an important part of the story, but this move also streamlined development of Apple’s platforms and brought them closer together.

After Apple introduced the HomePod at WWDC 2017, the device was rolled out for testing among employees. Apple began releasing builds of the HomePod’s firmware over the summer. Developers were able to get their hands on the firmware and find tons of hidden gems. One of them was a glyph that revealed the all-screen design of the iPhone X.

The firmware also revealed the existence of biometric face unlocking. It became a huge story and was talked about endlessly for a long time. Apple is usually very careful about revealing products of this caliber early. So when developers discovered the iPhone X, called ‘D22’ at the time, it was a massive surprise.

Apple’s website almost never reveals anything before it’s supposed to. So when Apple announced their annual September event in August of 2018, it blew people away when 9to5Mac found images of the event’s announcements hosted on Apple’s servers. 9to5Mac was exclusively able to reveal the iPhone XS and XS Max, as well as the Apple Watch Series 4 redesign.

Apple was rumored to be expanding the display size of the Apple Watch at the time, but nobody had any major leaks revealing the chassis redesign or the overhauled software that it came with. The leaks revealed that Apple was also bringing back a glossy gold finish to the Apple Watch for the first time since they had retired the 18K gold Apple Watch Edition.

Jony Ive and Steve Jobs were a match made in heaven. The two men created some of the most consequential products in human history together. After Steve’s death, Jony led the teams that created the Apple Watch and built Apple Park. Ive is unquestionably the most important designer of this era and his mark on the world is indelible. So when Apple announced in the summer of 2019 that Jony was leaving the company to form a new independent studio ‘LoveFrom,’ it was huge news.

Jony had already been taking a back seat to day to day product design, leaving those jobs to Alan Dye and Richard Howarth. So it wasn’t entirely surprising that he was choosing to leave, but it did send a shockwave through the industry. It gave Apple’s other designers the ability to try new things and break the mold.

Today Apple’s industrial design team is led by Evans Hankey, a long-time member of Jony’s team. Her first public introduction to the public was just this past December as the VoiceOver for Apple’s AirPods Max video. Apple’s human interface team is still led by Alan Dye, whose most recent public-facing event was narrating the introduction of Apple’s slate of new watch faces at the September 2020 event.