Find My Diary: First impressions of AirTag and Apple accessories 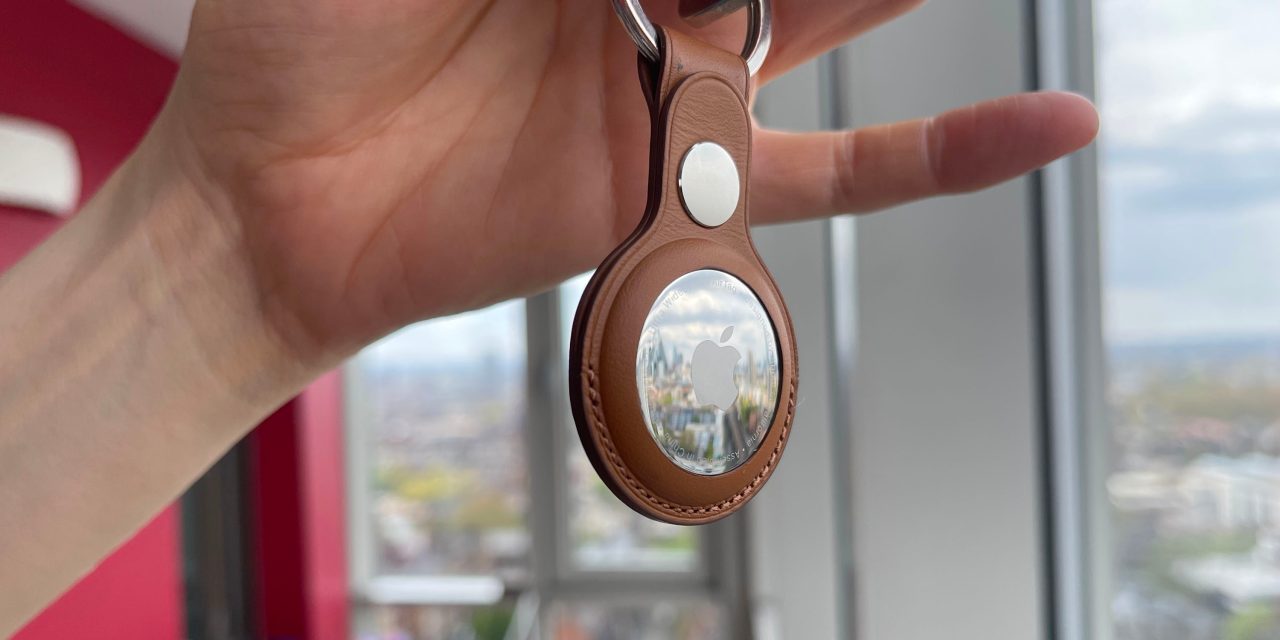 I took delivery of my shiny new, and unusually cheap, new toys from Apple this morning. First impressions of AirTag are very good indeed – accessories, less so.

I’d ordered two four-packs, for five bags, keys, a videography rig, and a bicycle. On the accessory side, I opted for Apple’s keyring plus one baggage tag …

There was no real surprise in the look and feel of the AirTags themselves – they are very much as I’d expected from Apple’s photos and description.

The leather accessories are disappointing, however: The leather is thin, and has a plasticky feel to it, very much like fake leather. Indeed, if this weren’t from Apple, I would strongly suspect it was fake.

There was also one functional issue with the keyring: The diameter of the metal was too thick to accommodate the RFID keyfob for our building’s access control system, so I had to use my original ring instead.

The way you insert AirTags into the holders works well, however: There’s a snap fastener that you open, slide in the tag, and then snap closed.

The luggage tag loop is a little tight, so you can either have it sit at an angle, which looks very untidy, or have it sit straight, when the loop ends up twisted in a way which is either messy or funky, depending on your point of view.

Someone pointed out that it sits straight without the twist if pulled all the way down, but that makes it stick out more. All in all, I’d say give Apple’s accessories a pass and hold out for better third-party ones.

As with AirPods, the pairing experience couldn’t be easier. As soon as I brought a tag close to my phone, a pop-up appeared with a single Connect button. Tapping that gave me the option of choosing a preset like Keys, or entering my own name. In the case of my first AirTag, I selected Keys and it then automatically labeled the tag Ben’s Keys.

That done, it immediately showed up when I opened the Find My app in exactly the same way as my other Apple devices.

I tested this by asking my girlfriend to hide my keys, and then went searching for them with the Find My app.

The way this works really does feel like magic. I wandered along the corridor until it picked up the signal, then it told me both distance and direction with incredible accuracy. It literally guided me to their precise location at the back of a shelf without any need to activate the sound. I was blown away by how well this worked!

Attaching AirTags to my possessions

For my keys, I used Apple’s leather keyring holder. For bags, I did buy a luggage tag, but my plan was to find unobtrusive places to attach them. They are so small that this was trivially easy with all my bags, simply slipping them into a compartment inside the bag.

I mentioned that my bicycle already has a tracker, but it’s a custom-built machine whose loss would upset me greatly, so I’m happy to lay out another $25 for additional protection. I wouldn’t think putting it inside a metal tube would be practical when it comes to Bluetooth range, so I’m instead going to use adhesive velcro to put it under the saddle.

Of course, having Find My tech embedded into the bike itself would be even better, and VanMoof has lent me one of their electric bikes so I can experience this for myself – will report back on that next week.

Finally, just as protection against the unlikely risk of a snatch theft in the street, I attached one to the underside of my videography rig. There’s an opening in the SmallRig cage to give access to the battery compartment, and there’s a matching opening on the other side that seems almost tailor-made for an AirTag! I used strong double-sided tape to attach it.

Sitting underneath the rig, it hopefully wouldn’t be noticed by a thief before I’d had time to track them.

Again, the accuracy of the direction arrow and distance was absolutely spot-on. Here’s how the experience looks.

The real test will come when I put one into Lost mode and try to find it somewhere in the city, something I hope to test over the weekend. But my first impressions of AirTag are that this is really fantastic tech, and an absolute bargain for the price.

Okay, eight of them wasn’t an entirely trivial purchase, but I do consider it decent value for the peace of mind.

Those are my first impressions, how about yours? If you’ve received your AirTags, please share your thoughts in the comments.