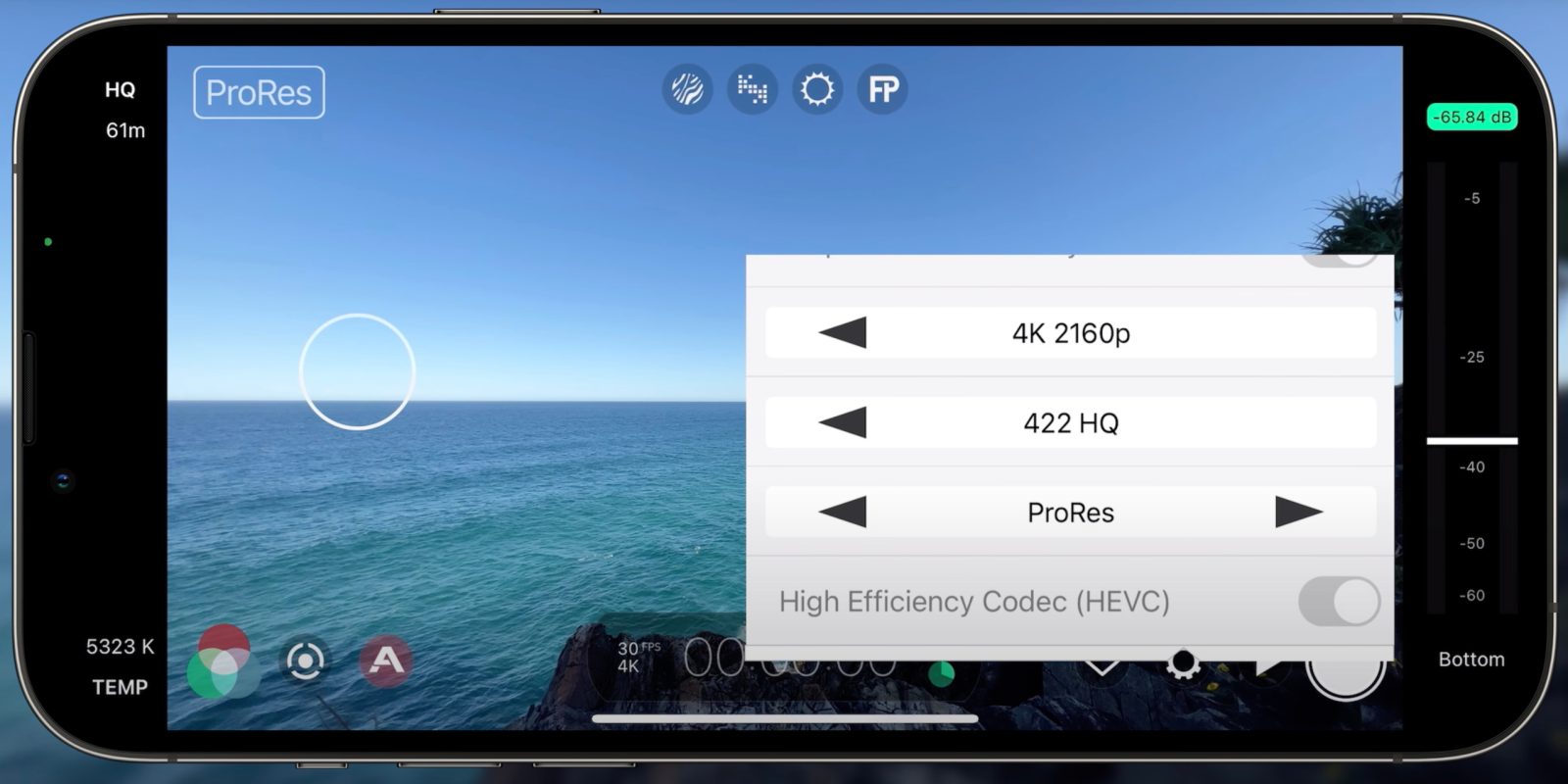 Today Filmic Pro version 6.17 is being released with full support for ProRes video for the iPhone 13 Pro and iPhone 13 Pro Max, making it the first iOS app available with support for capturing ProRes. ProRes video, which is hardware-accelerated by the A15 Bionic chip, is one of the headlining features for the higher-end pro variants of the recently released iPhone 13.

When Apple announced ProRes support at its iPhone 13 event, I was hardly a surprised. Not only did recent rumors suggest this, but for people who are highly invested in video workflows, the lack of ProRes support — both for capture and playback — has been a glaring omission for years.

Up until the release of the iPhone 13 Pro, Apple’s flagship mobile devices could only capture video in either HEVC (H.265) or AVC (H.264). These codecs are ideal due to their relatively lightweight files sizes, but they are heavily compressed and thus complex, which comes at the expense of performance, video quality, and flexibility in post-production. Both HEVC and AVC are great for everyday usage, but for editing videos and color grading via nonlinear editing software like Final Cut Pro, these codecs aren’t always ideal.

ProRes, while not RAW video and still lossy, is a much higher quality acquisition format, more flexible in post, and makes for more forgiving color grading. Because it’s a less complex codec than H.264 or H.265, it lends users better real-time video editing performance in apps like Final Cut Pro on Mac.

Although ProRes is often the final delivery format for commercial projects, feature films, and broadcasts, it isn’t usually used as a delivery format for general Internet distribution. Because of the extremely large file sizes, most people don’t export videos in ProRes for upload to online services like YouTube. ProRes video, as you’ll learn, is much heavier than H.265 or H.264, which is what most people use when exporting videos for sharing on the web.

All flavors of ProRes are 10-bit, feature 422 chroma subsampling, and all-intra encoding. With that being said, there are differences in the maximum bitrate and target bitrate depending on which ProRes family members you choose to use, the resolution you choose, and the frame rate selected. It’s important to note that ProRes is a variable bit rate technology. While most frames will stay clustered within a few percent of the targeted bitrate, fewer bits are used on frames of video that would not yield benefits from encoding at higher data rates.

How much data does 4K ProRes capture use on iPhone 13 Pro?

I put together this chart to give you a rough approximate estimate of how many minutes of 4K ProRes a person can capture with the 256GB, 512GB, and 1TB iPhone 13 Pro. ProRes bitrates vary based on the subject being captured. Oftentimes the data rate will be lower than the maximum data rate. Also keep in mind that these are best case scenario numbers, since the OS, apps, and data significantly eat into these maximum storage amounts, the amount of available storage for 4K ProRes capture will be lower in real world scenarios.

When you break down the numbers, it’s easy to see how storage-hungry 4K ProRes can be, especially the higher-quality variants like 422 and 422 HQ. It clearly shows why Apple is not allowing 4K ProRes capture on iPhone 13 Pro devices with a mere 128GB of storage — with ProRes 422 HQ capture, such a device would be close to maxing out storage after approximately 20 minutes of footage in a real world scenario. 128GB of storage is nothing to sneeze at, but 4K ProRes capture simply isn’t realistic for that storage amount given the large data rates. Perhaps iPhone 13 Pro storage should have started at 256GB as a baseline?

Step 3: Select ProRes as format and select the ProRes family member in the menu above. You should see a ProRes logo in the upper left-hand corner of the app window.

Step 4: Press the record button to begin ProRes capture. You can see the quality and amount of minutes remaining in the upper left-hand corner.

Step 5: After capture is complete, you can view your footage directly in Filmic Pro by pressing the play button, save the footage to the camera roll, or export the footage to another app or destination.

Users can easily save a ProRes video captured in Filmic Pro to the default Photos app. Upon playback you’ll notice a little “ProRes” indicator in the upper left-hand corner of the frame, similar to how Apple alerts users about Live Photos, HDR video, RAW photo, etc. Beware, it appears that ProRes videos will upload to iCloud just like normal videos. These uploads can be a large drain on bandwidth and iCloud storage. Hopefully Apple provides a setting to disable ProRes video uploads to iCloud.

Tapping the Info button beneath the video in iOS 15 reveals additional meta data about the ProRes video. It will show the app you saved the video from, in this case Filmic Pro, along with the fact that it’s a ProRes video. As of iOS 15.1 beta 2, the exact flavor of ProRes is not displayed within this enhanced metadata view, but it’s possible that Apple will provide an increase in detail once ProRes capture is added to the default Camera app via a future iOS update.

Users can edit ProRes video within the default Photos app, within iMovie, or third-party apps like LumaFusion. Of course, you can also export your ProRes videos to your Mac, and edit in Final Cut Pro X. Unfortunately the iPhone → Mac/iPhone workflow reveals a significant bottleneck in the ProRes video editing workflow.

The iPhone 13 Pro lacks professional I/O, namely a USB-C port with fast data transfer speeds. As such, I was stuck transferring gigabytes of video via a slow Lightning connection, or via AirDrop. Both methods are pretty much non-starters as far as I’m concerned. Here’s hoping that next year’s iPhone 14 makes the switch to USB-C, ushering in much faster offloading speeds between iPhone and Mac, and between iPhone and iPad Pro.

ProRes acquisition has always seemed inevitable, and its arrival, both for capture and editing, is a welcomed addition for those heavily investing in iPhone video workflows. I think this is yet another step to the eventuality of finally having Final Cut Pro available on iOS devices. The lack of ProRes support has long been a glaring omission for video editors using iPads and iPhones, so this is one big step in the right direction.

With that being said, the data rates for ProRes video capture, when compared to typical H.264 and H.265, are massive, especially for ProRes 422 and ProRes 422 HQ. Offloading such footage is a pain, whether it be via the abysmally slow USB 2.0 direct Lightning to USB cable connection or via AirDrop. The appearance of ProRes makes the iPhone’s lack of professional I/O like USB-C really stand out, and I’m hoping that this will be the final year of Lightning on iPhone.

If you’d like to try ProRes on iPhone, you’ll be able to download Filmic Pro 6.17 today. The update is propagating now and is free for existing Filmic Pro customers, and $14.99 for new customers. You can also choose to wait until Apple delivers native ProRes capture with the default Camera app, which is coming this fall via iOS update. Either way, you’ll need an iPhone 13 Pro to capture ProRes footage.

What are your thoughts on shooting ProRes with an iPhone? Sound off down below in the comments.