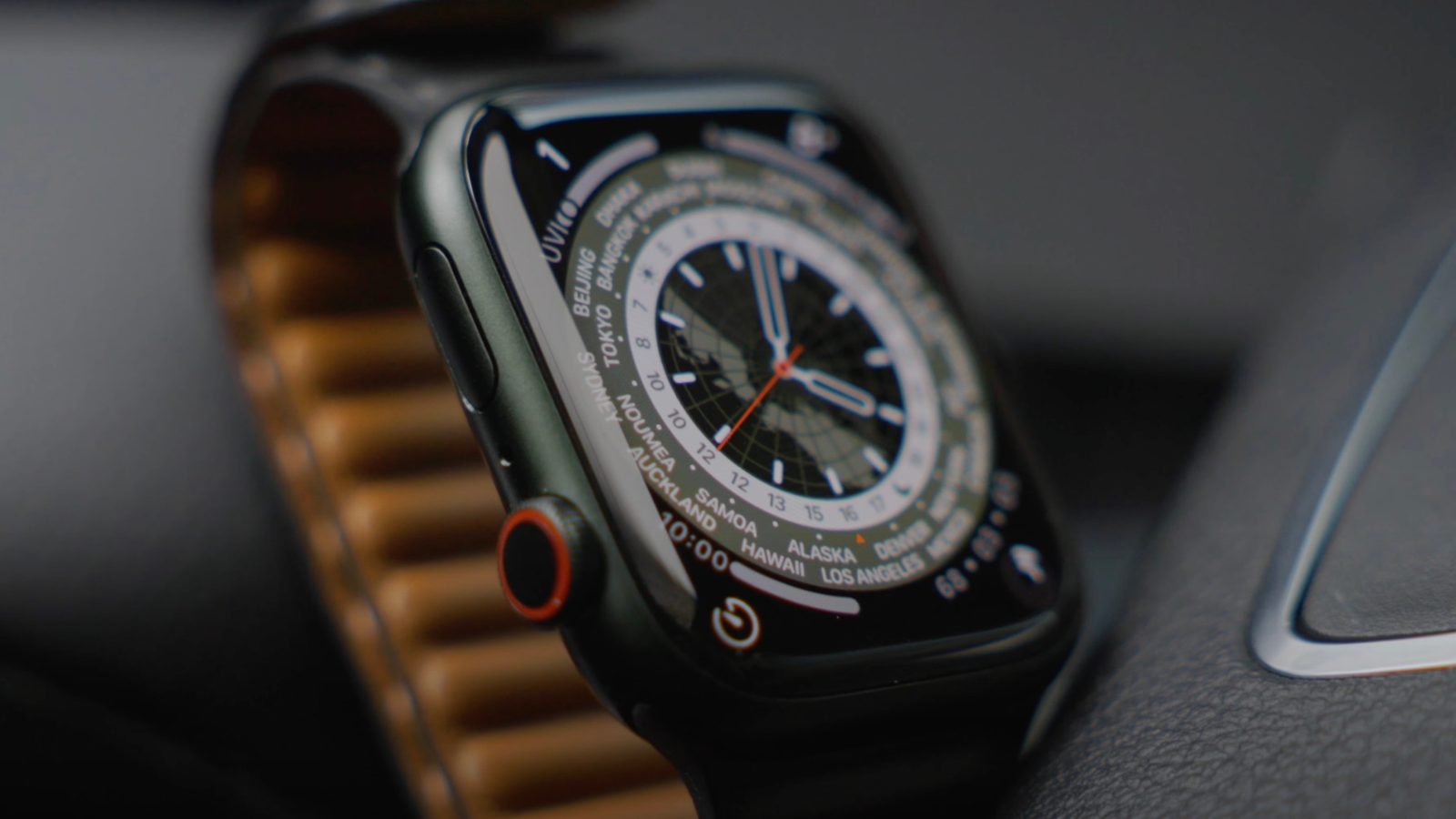 The first Apple Watch Series 7 pre-orders are shipping to customers ahead of its official release on Friday. Ahead of that release, the first embargoed press reviews of the Apple Watch Series 7 have now been published, offering a closer look at the new 41mm/45mm sizes, the new colors, and more.

TechCrunch writes that if you’re a daily Apple Watch user, you’ll notice the difference in size “immediately,” even though it’s not a “radical departure” from years prior.

If, on the other hand, you’re a daily Apple Watch user, you’ll notice the difference on your wrist immediately. The upgrade from Series 6 to Series 7. The larger model (which we’ll be focusing on for the remainder of this review) bumps up from a 1.78-inch screen (measured diagonally, à la a smartphone) to 1.9 inches. That represents a 20% increase over the Series 6 and a 50% increase over the Series 3, which somehow manages to keep sticking around.

TechCrunch adds that the biggest benefit of the larger display is the addition of the new QWERTY keyboard:

The biggest day to day change, however, is the addition of a full QWERTY keyboard for text input, either by tapping or sliding between letters with QuickPath. I’m surprised at how well both worked on the small screen. As soon as you open up the application, an “Apple Watch Keyboard Input” notification will pop up on your connected iPhone, asking if you’d like to input the text on iOS. In most instances, the answer is probably yes. But it’s nice to have the option if, you’re (gasp) going to be away from your phone for a bit.

The Wall Street Journal notes that the incremental improvements do indeed add up, but that the Series 7 is unlikely to convert Apple Watch skeptics:

These incremental refinements add up to a better—though not significantly better—watch experience. If you liked the Apple Watch before, you’re going to like this one. If you weren’t already convinced you needed a $399 wrist computer, the Series 7 probably won’t convert you. But if you’re an iPhone user thinking about your first smartwatch, you’ll want to consider this.

The Verge says that while the larger and brighter display is a nice enhancement, it’s not a big enough change to warrant an upgrade for most:

If you have one of those older Apple Watches, I don’t think there’s anything here that should compel an upgrade. All the new features are very nice but not necessary. If there issomething that’s bothering you about your current watch, then by all means go for it if you can afford it. Also, while the Series 3 is still kicking around for cheap, I don’t think it’s a great buy anymore. The Apple Watch SE is a better value.

There’s no reason that we should have an expectation of major year-on-year updates for the Apple Watch. These smaller iterations might not be what we’ve been hoping for — a big redesign with much more battery — but that doesn’t make the Series 7 bad on its own merits.

CNBC notes that it would have been nice to see Apple up the battery life this year instead of just focusing on charge times.

I wish it had longer battery life. Apple promises up to 18 hours, and I’ve been getting about that with the Apple Watch Series 7. I just wish Apple could find a way to extend that to two or three days so that I didn’t need to worry about charging it. The faster charger definitely helps, but sometimes I still worry that I’m going to go need to find the charger and top it off before going for a run. But a bigger battery would make it thicker, and I don’t want that either.

CNN Underscored says the brighter display is noticeable, even if the practical implications are minimal:

The display is an Always-On Retina display which offers vibrant colors and sharp contrast points (think sharp text when reading an email). The Always-On nature allows you to look at the Watch and see the time or whatever else is on your watch face without needing to tap the screen or engage it. Apple claims the Series 7’s display is 70% brighter than the Series 6, and we did notice in side-by-side tests that the Series 7 displayed complications (widgets on the screen like weather or activity) with more clarity. Apple says they’ve tuned each watch face as well and it really is only noticeable inside. There’s no improvement when using the display outdoors.

Input on the new color options:

There are five new colors for the aluminum Apple Watch Series 7. My green review unit reminds me of the midnight green iPhone 11 Pros; it’s a dark military green that sometimes looks black. I haven’t seen the other colors in person. Midnight is black with hints of blue, I’m told. Starlight is silver with traces of pinkish gold. Blue is a light blue. And (Product)Red is, well, a red. They look stylish enough. Colors for the stainless steel (graphite, silver, and gold) and titanium versions (space black and titanium silver) are less fun.

CNET has some more details on the display changes:

The Series 7 also has IP6X dust resistance and a front crystal cover that’s more than 50% thicker, although I haven’t had the opportunity to put that to the test just yet. The corners are also softer and more round, but you can really only notice this when examining the watch very closely. The aluminum model also comes in five new colors: midnight, starlight, green and updated blue and red options that are lighter compared to the shades that were available for the Series 6. I’ve been wearing the starlight model, which is like a blend of gold and silver.

Engadget says that one of the nicest changes is the new watch faces that are designed to take advance of the larger display:

In addition to enlarging most of the elements across the UI, Apple also added new faces that can display more information at once, like the Modular Duo. There’s also a Contour style that pushes the clock’s digits all the way to the edge where they warp and “melt” over the sides like in Salvador Dali’s The Persistence of Memory. The remaining two are a Portrait face that we already saw in the watchOS 8 beta, and World Time, which is helpful for interacting with people in other countries. I used Modular Duo the most, though it’s not very attractive, and when I wanted something prettier I just switched to one with my face as the wallpaper instead. (Just kidding: I use the “Artist” design or a cute animal background.)

The consensus among reviewers is seemingly that the Apple Watch Series 7 is indeed an iterative update over last year’s Series 6, but that the benefits of the larger display shouldn’t be overlooked. Nonetheless, users of most recent-model Apple Watches shouldn’t be compelled to upgrade this year.