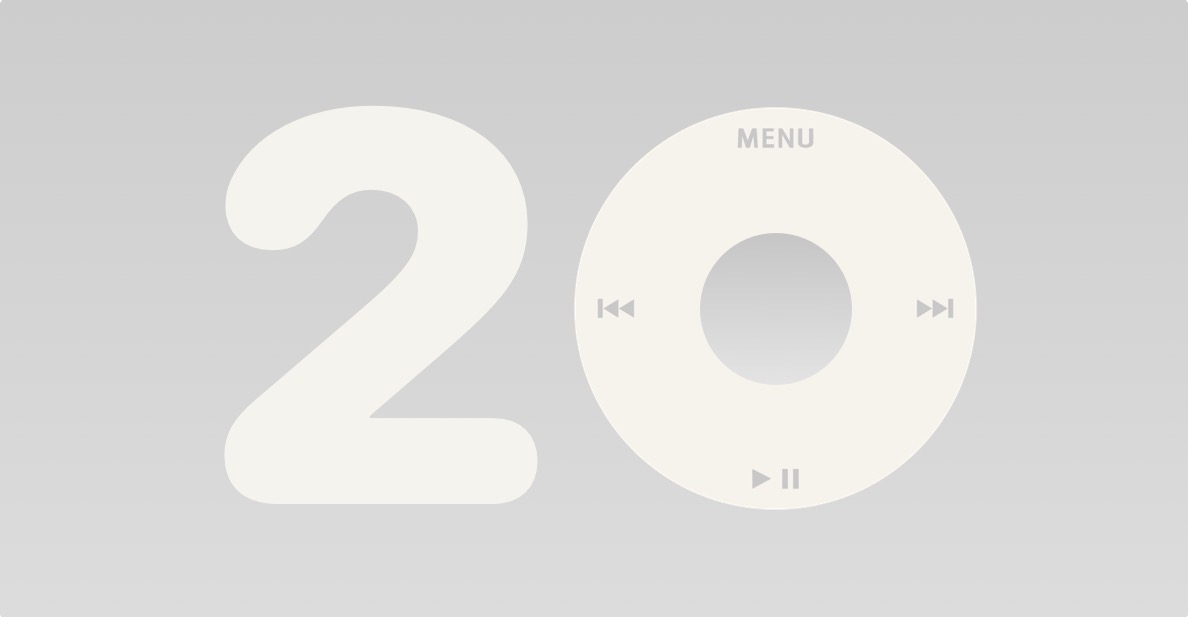 From Town Hall to the world stage

On October 23, 2001 Steve Jobs walked out on onto the Town Hall stage at 4 Infinite Loop in Cupertino and introduced the very first iPod. There’s no question that the industry was slightly confused at Apple’s decision to make an MP3 player. After all, the company was best known for making big colorful computers not sleek white little boxes that fit in your pocket.

What the media didn’t realize at the time was that it was a natural next step for the company and Steve knew exactly what he was doing. There’s that famous story about the executive team, Jon Rubinstein in particular, discovering the small 5GB hard drive made by Toshiba. It was a clear indication that the industry was really stepping on the gas when it came to miniaturization. The iPod was the perfect kind of device for consumers to get introduced to an Apple product that goes with you everywhere. It was friendly, personal, and unlike anything anyone else had ever made.

The first few years of iPod were fairly slow. The device was expensive at $399 and only played music. At that time it was hard to justify unless you were an audiophile or loved music and had money burning a hole in your pocket. iPod really took off once it was made compatible with Windows. Apple added the ability to sync your iPod with a Windows computer with the second generation model and a year later they introduced iTunes for Windows streamlining the experience. In the blink of an eye, the iPod became a gateway drug for Windows users to get hooked on Apple products.

The company shipped several different families of iPod over its lifetime. The original white iPod, later renamed iPod Classic, had 7 different generations. Following the 4th generation iPod, the company created a new spin off line that ended up being short lived: the iPod Photo. iPod Photo was the first iPod with a colored display. Alongside iPod Photo, Apple also introduced the first U2 iPod which was refined over the years as the iPod evolved.

That same year, 2004, the company unveiled the first colorful iPod: the iPod mini. iPod mini was the first iPod to have Apple’s now signature anodized aluminum finish. It was only revised once with some new colors and a better display. It was also the first Apple product to come in gold. In 2005 the company made things… mini-er. With the iPod shuffle, Apple democratized the product line and made it insanely accessible. For just $100, anyone could get their hands on an iPod that worked with iTunes. iPod shuffle was also the company’s first wearable. It had tons of accessories like lanyards, sport cases, docks, and even special types of headphones.

In 2005, the iconic iPod nano replaced the iPod mini. It had a breakthrough ultra thin form factor and it was the iPod that made small speedy solid state storage synonymous. Throughout its life Apple experimented with the product changing its design entirely nearly every single year. The 3rd generation iPod nano gained a squat wide form factor, the 5th generation iPod nano had a video camera and a unique polished finish, the 6th generation iPod nano was really a predecessor to Apple Watch and featured a small square design with a touch display. When Apple began work on the Apple Watch, they switched the iPod nano back to the tall and skinny design and added a home button. Both iPod shuffle and iPod nano were put to rest in 2017.

The last iPod to survive is of course the iPod touch. It’s still around, languishing in the shadows of the Apple Store. It’s out of date, too small, and frankly not a good value. But iPod touch used to be star of the show. When it was introduced in 2007, it helped make the iPhone the revolution that it was. It was an iPhone without the phone and expanded the iOS user base. Early on in its life it was updated alongside the iPhone, only getting skipped over a few times before the product ultimately lost its steam. You can still buy an iPod touch from Apple in several colors for $199, but who knows how long that will last. The company has removed it from the new music page on Apple.com and you now have to actively search for the product to find it.

The iPod itself was great, but you could argue that the reason it was so successful was Apple’s now legendary marketing campaigns. The company worked with longtime collaborator Chiat/Day on the iconic silhouette ads that made the white earbuds the fashion statement that they were. The company iterated on the style many times over the years and had special artist guests like Eminem and Coldplay. They’ve revived the style a few times since then, most recently with the AirPods 3rd generation reveal video and website.

The silhouette ads weren’t the only important marketing campaign for iPod. The company’s ads evolved throughout the iPod’s life. Some of my favorite ads include: the 4th generation iPod nano’s paint dripping ad set to Chairlift’s “Bruises,” the 3rd generation iPod nano’s ad set to Feists “1234,” and the 2nd generation nano’s trippy 3D coloring ad. Like iPod nano itself, the ads were a testing ground for wild and quirky ideas.

With the history of the iPod out of the way, let’s get personal. I asked the 9to5Mac team to share their thoughts on the iPod’s 20th anniversary and you can read them below:

While the iPod was ultimately available in a variety of different form factors, the iPod nano will always be the “quintessential” iPod in my mind. From its bright and fun colors to its iconic marketing camapigns, the iPod nano represented everything there was to love about mid-2000s Apple. In many ways, falling in love with the iPod nano is the reason I’m lucky enough to have the job that I have today.

Should Apple revitalize the iPod lineup in 2021? While there aren’t many practical reasons for this, I have to admit that a so-called “iPod Max” inspired by the iPod Classic design but with a modern twist would be an instant purchase for me.

I’ve always loved listening to music on the move, from the first Sony Walkman on. That was eventually replaced by a Discman, and then the first ever mp3 player, the MPMan F10. All three generations of tech had one thing in common: they only gave me access to one album at a time.

I happened to be in New York the day the iPod went on sale, and I remember trecking across half of Manhattan before I finally found a place which had them in stock. Having so much of my music on me at all times was an absolute joy, and I literally carried that thing everywhere I went.

My final model was the 160GB 6th-gen Classic, which stored all of my music. That was, for me, the ultimate at the time: being able to play any of my music at any time anywhere.

Eventually my iPhone took over music duties, and now of course we have the luxury of being able to play pretty much any music on demand – but I’ll always look back on my iPods with a huge affection.

The iPod meant the world to me back in the day. When I was a little kid, I wanted an iPod desperately. I remember my Dad, who at the time was quite tech savvy, having a gorgeous silver iPod mini. I needed to have one of my own. Sure enough, on my 7th birthday my grandma surprised me with an iPod shuffle. It was the first Apple product that I received brand new out of the box. I used to wear it everywhere with the lanyard, dock it in my room, and even used it as a flash drive for school.

I had tons of iPods throughout the childhood. The second iPod I got was the 5.5 generation black iPod video in 2006. I had asked my parents for a (PRODUCT) red iPod nano but they surprised me with the best iPod you could get at the time. I loaded that thing up with so many tv shows and movies and it was the first iPod that slowly crept up on my Nintendo DS. A year later, Apple introduced the original iPod touch, which I got for Christmas that year. It changed everything. I salivated over my Dad’s original iPhone and I had hoped that the company would make an iPhone without the phone. The original iPod touch is one of my favorite Apple products ever made and it was the first iOS device I owned.

Left to languish, but not forgotten

Some of Apple’s best products were iPods and it’s sad to see how the product line has languished. Apple knew that phones were going to cannibalize the iPod, so it made its own phone. Sure enough, they were right and the iPhone ate the iPod’s lunch. It has stuck around in the form of the iPod touch but it shows no signs of life.

Apple Music has changed things too. It holds nearly every song ever written. We’re a long way from 1000 songs in your pocket. Now there’s tens of millions on your wrist. Apple Watch, AirPods, and HomePod have arguably taken the iPod’s place. Apple clearly has fun with the three product lines. The new HomePod minis come in delightful colors that feel very iPod-y. AirPods are everywhere and arguably more iconic than the old white earbuds were. And Apple Watch is on wrists everywhere, serving a similar purpose as the iPod. It’s a complement to your phone.