Dropbox M1 support is in testing, but won’t be available until next year [U] 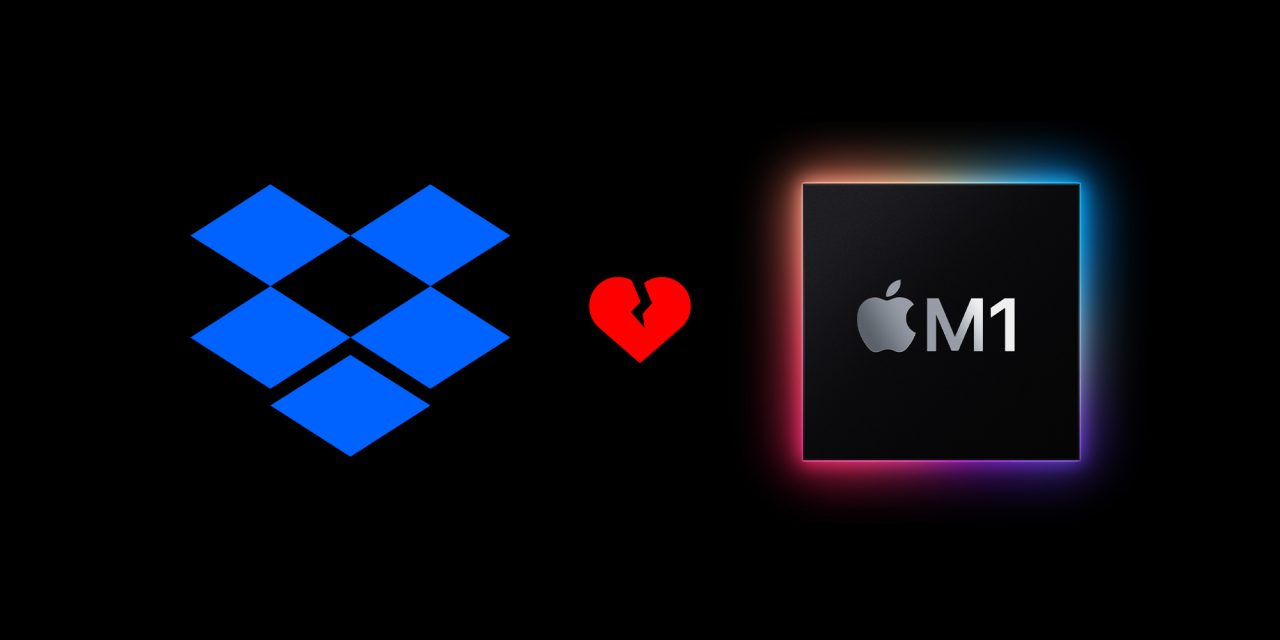 Dropbox M1 support still hasn’t arrived, even after Apple launched its new MacBook Pro models that run on more powerful versions of the chip. Worse, the company claims there isn’t yet enough support for the idea to make it a priority. (This statement was made by a company forum rep who was unaware of the position.)

The Mac app only runs on M1, M1 Pro, and M1 Max machines under Rosetta, which reportedly kills the battery and uses a gig of memory …

An M1 Mac owner made a request on the Dropbox forum in June.

Please can you upgrade the Dropbox app so that it works natively on Apple Silicon Macs (M1) without Rosetta.

Rosetta is not an option as it annihilates the battery.

Other Mac owners agreed that the Rosetta option is a very poor solution.

Agreed, while Dropbox does operate under Rosetta without bugs, the power and ram resources required are silly. With dropbox running I cannot get anywhere near the expected battery life with casual use. Quit Dropbox and we get back to some semblance of normalcy.

Come on now, I pay for this service, it’s not freeware done by one dude at home, this should have been ready for M1 long ago.

Incredibly, a Dropbox representative said they weren’t even going to share the suggestion internally without more support!

This idea is going to need a bit more support before we share your suggestion with our team.

Customers are understandably expressing their incredulity that they have to vote on this to make it happen.

“This really shouldn’t be something that we vote on. If Dropbox wants to support Macs it HAS to include that, otherwise it shouldn’t be available for the platform anymore and customers have to go somewhere else – it’s a simple business decision and not a nice-to-have!”

“This is becoming comical.”

“Given that it took them right up until Apple discontinued 32-bit support completely to bother recompiling Dropbox as a 64-bit binary (i.e. it took them almost 10 years), I really wouldn’t hold my breath. At this stage, my impression is that the Dropbox development team consists of one part-time intern in a basement.”

It’s especially embarrassing given that Google Drive – which might be considered a more direct rival to Apple’s iCloud – has already offered full M1 support for its Mac app. Box does the same.

Since battery life is a key benefit of Apple Silicon, it seems truly astonishing that Dropbox doesn’t understand that this problem is a massive incentive for Mac users to switch to a competing cloud service. I currently have my entire Documents folder mirrored on Dropbox as it’s historically been faster to update, and easier to share files, than iCloud – but I’ll be rapidly jumping ship for sure if the company doesn’t fix this.

Add your vote by clicking the blue button on the right on this page. Note that although it will ask you to sign up to the forum, this doesn’t involve anything more than choosing a username.

While many developers have said that it is trivial to convert apps to support Apple Silicon, Steve Troughton-Smith has tweeted that there may be other factors at play in this particular case:

In other words, Apple doesn’t want Dropbox – or other app developers – to add Kernel Extensions which effectively add to the code run when macOS boots. The company may be doing something to make this tricker than it would be with conventional apps.

It’s been suggested to me that what STS may be hinting at here is that Apple makes it incredibly difficult for developers to use kexts on Macs with Apple Silicon. This is what a user would have to do to allow a kext on an M1 Mac:

Kext management by the user requires a restart to recoveryOS to downgrade security settings. The user must press and hold the power button to restart into recoveryOS and authenticate as an administrator. Only when recoveryOS is entered using the power button press will the Secure Enclave accept the change of policy. The user must then select the Reduced Security tickbox and the option “Allow user management of kernel extensions from identified developers”, and restart the Mac.

Update 3: Dropbox has now told us that it has a Apple Silicon version in testing, but that it won’t be available until next year.

Dropbox currently supports Apple M1 through Rosetta. We have an internal build for native Apple M1 support, which we’re currently testing and we’re committed to releasing in the first half of 2022. While we regularly ask for customer feedback and input on new products or features, this was not one of those instances.