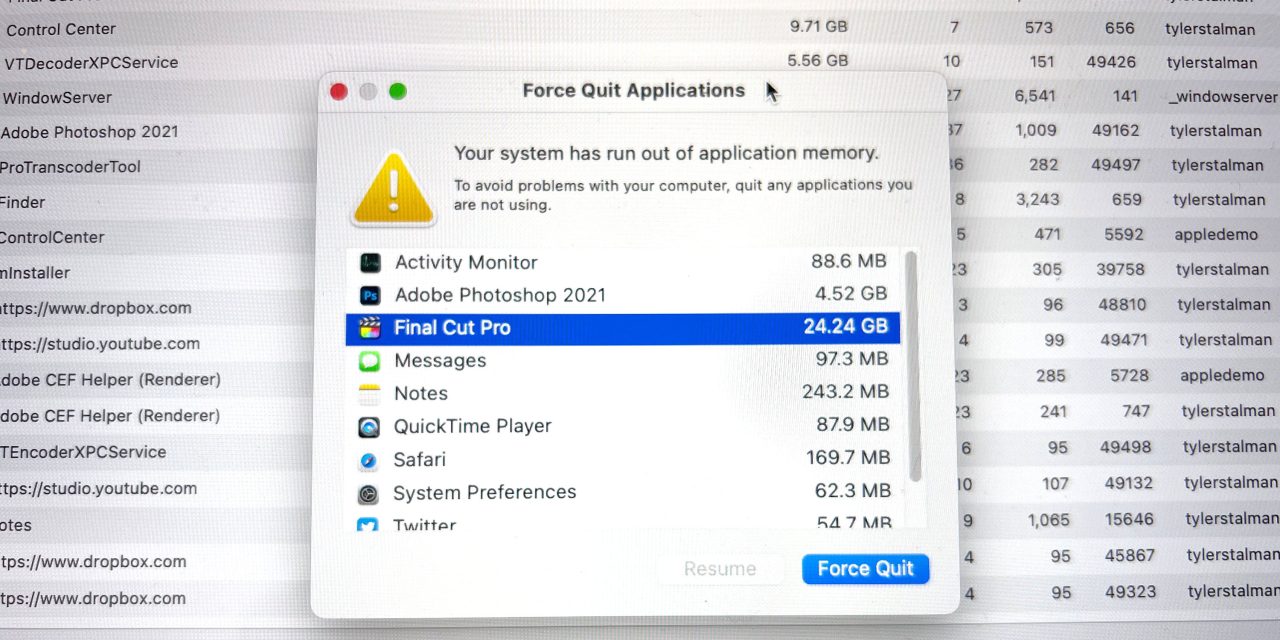 We reported yesterday on a Mac application memory error that I first saw with the Mail app on my new M1 Max 16-inch MacBook Pro. Searching Twitter revealed other apps were also exhibiting the same behavior, which appeared to be mostly Apple’s own apps.

However, it’s now clear from the growing number of reports that a very wide range of apps are affected, and that it happens on both Intel and Apple Silicon Macs …

The exact behavior varies. In the worst of cases, a user cannot change focus from the alert window, requiring a forced restart.

Dismissing the window achieves nothing as it will immediately reappear.

While the early reports I spotted named first-party Apple apps like Mail, Final Cut Pro, Music, and even Finder, it has become clear since then that a great many other apps are suffering from the same issue.

While some have seen it during Monterey betas – and some report instances on older macOS versions too – the majority of reports follow users updating to macOS Monterey 12.0.1.

“I had it yesterday (16-inch MBP M1 Max, 64GB RAM, 4TB SSD). I quit most apps normally, with no forced system restart, and haven’t seen the issue today. … Needless to say, a disconcerting message on a machine with 64GB! Here’s to a hopefully fast fix.”

“Happened like 6 times in DaVinci Resolve since getting Monterey/M1 Max.”

“Got that and Mail was using 50GBs. M1 MacBook Pro with Touch Bar.”

“Same here. M1 MacBook Air 16GB ram. macOS 12.0.1. Mail, as well as Pages and Keynote eating high 80GBs and 90GBs of memory when the alert started showing up. Needless to say, the exact same machine, running same software under same workloads never produced this alert under macOS 11. And I have over 600GB of free disk space (on 1TB drive), so not an issue with low swap space.”

“It’s happening to me with Safari 15 on an Intel MacBook Pro.”

“I have this issue using Apple Music on my iMac M1 8GB since Big Sur :(“

It should be noted that older reports could well be cases of an app legitimately running out of RAM.

The record appears to be one 9to5Mac reader who showed a screengrab of SourceKitService showing 308GB of usage on a 64GB machine! Examples where the usage exceeds the physical memory could be an error in the number displayed, or might be legitimate, with the apps using disk swap space.