MacBook Pro Diary: My three-screen mobile workspace for a month in Buenos Aires 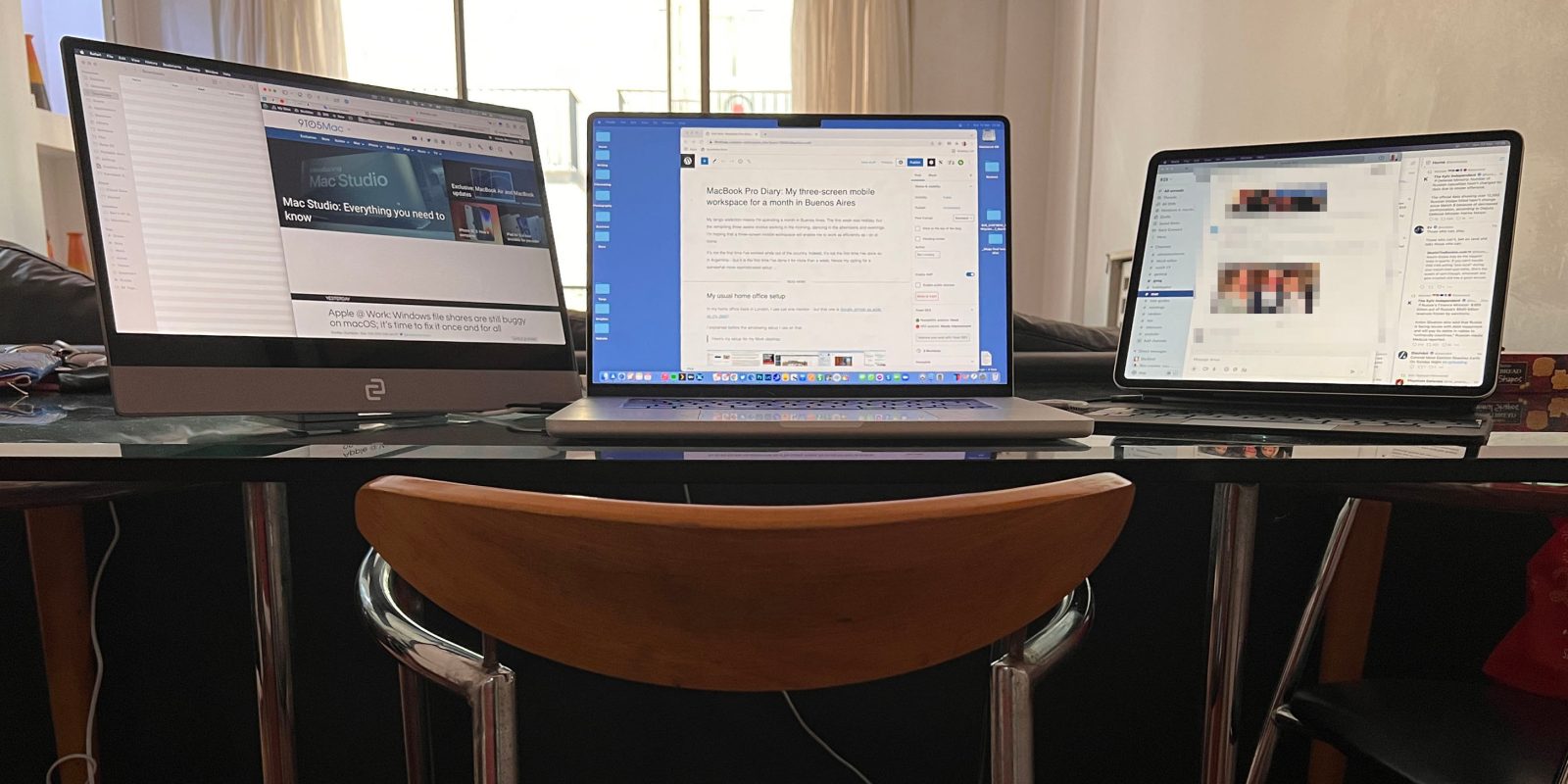 My tango addiction means I’m spending a month in Buenos Aires. The first week was a holiday, but the remaining three weeks involve working in the morning, dancing in the afternoons and evenings. I’m using a three-screen mobile workspace that emulates as closely as possible the ultrawide monitor I use at home.

In my home office back in London, I use just one monitor – but that one is literally almost as wide as my desk!

A 49-inch monitor being a little difficult to transport, I do of course have to compromise somewhat for my mobile workspace. At the same time, I want to be able to mirror as closely as possible the core elements of my usual work environment in portable form.

So, what’s my setup here?

Front and center is my MacBook Pro. This is a 16-inch M1 Max MacBook Pro, which serves as both my center display and keyboard. This is where I keep the Chrome browser I use for WordPress.

To the left is a 15-inch portable monitor. I’d previously used Gemini and BladeX models, and this time it’s an Espresso Display. After the BladeX mess, I turned down a review when the Espresso was on Kickstarter, telling the company I’d wait until it was actually in production, to be sure the project was going to deliver. That is now the case, and a review will follow.

This is where I keep my Safari and Finder windows (the latter primarily used as a holding place for images), to the left of the Mac. My RSS reader, Vienna, sits beneath Safari, as I’m either using one or the other.

Finally, my 12.9-inch iPad Pro, with the Magic Keyboard used as a stand, acts as the right-hand monitor, for the Slack chatroom (hidden) and Tweetdeck. This is powered from the Mac, just to keep it topped-up ready for standalone use.

The map isn’t for decoration: I found that I kept trying to use the Magic Keyboard trackpad when turning to that display, so I had to cover it!

It’s a setup that works really well, and Apple’s ‘just works’ ideal is more-or-less the case here. The portable monitor just needs a single USB-C cable to connect it to the Mac, and that provides both power and video signal. Activating the iPad display simply requires going to System Preferences > Displays and then selecting the iPad from the Add Display pull-down menu.

It does take some fiddling to arrange the displays, but that’s a one-off. I strongly recommend setting the menubar to appear on every monitor.

I use Stay to lock my windows to particular monitors and desktops, and this is an app I highly recommend even if you use a single monitor, as I do usually. This means that as soon as both external displays are connected, all windows spring into their pre-assigned positions and sizes.

I say that the system is close to ‘just works’ because the iPad does sometimes disconnect, but so far this has happened only once a day or so, and each time it has immediately reconnected when I re-add it.

Two days in, the setup is working really well. It provides the same windows in the same positions as I have at home, albeit in somewhat smaller form, allowing me the same productivity. The slim form factor of both monitor and iPad means that I was easily able to fit the entire setup in a carry-on bag.

Do share details of your own mobile working setups in the comments.