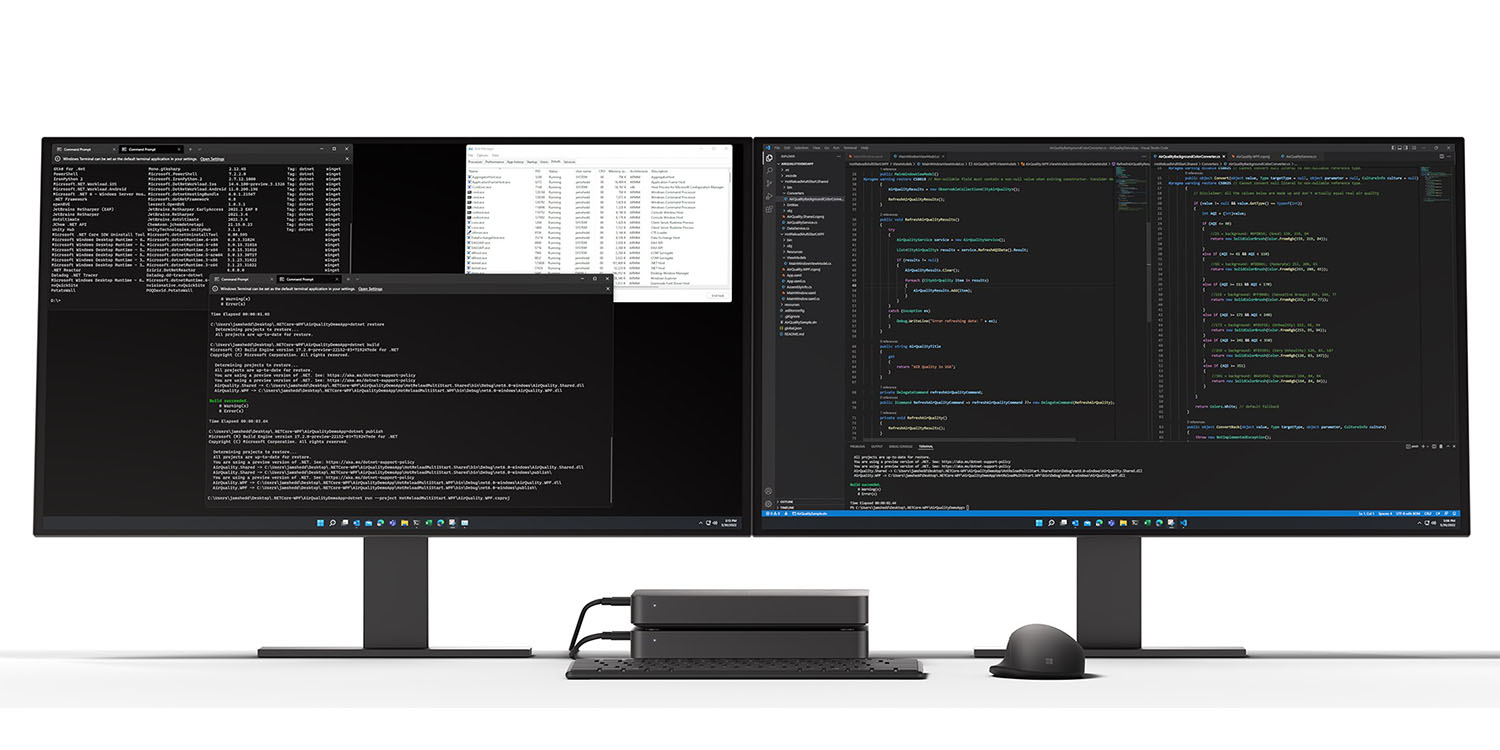 Microsoft has revealed what looks very much like an M1 Mac mini clone during its developer conference, Build 22. The device is known as Project Volterra.

The resemblance is more than skin-deep: the machine is ARM-based, and effectively plays the same role as Apple’s Developer Transition Kit (DTK), offered back in 2020 …

Macworld drew attention to the similarities.

Microsoft’s developers conference, Build 2022, is happening this week, and amid the flurry of announcements was something very Apple-like. In fact, if you weren’t paying close attention, you might have thought Microsoft released its own Mac.

It’s called Project Volterra and it involves a new Windows for Arm developers kit in a PC that looks a lot like an M1 Mac mini. It’s a square, metal mini desktop PC dressed in space gray that appears to be the same size and shape as Apple’s smallest Mac (though it’s made of recycled ocean plastic rather than aluminum).

The specs for the devkit—which is used by software developers to take advantage of new features—have not been released, but it doesn’t run an Intel chip. Instead, it runs a Qualcomm Snapdragon system on a chip that’s Arm-based.

Microsoft initially seemed to have little interest in ARM, and its first move into a non-Intel chipset wasn’t a notable success: Windows RT running on the Surface 2.

However, the company has grown increasingly warm toward ARM over the years, in large part due to its growing frustrations with the pace of Intel’s development, especially in the area of power-efficient mobile chips.

Unlike Apple, which used the DTK as a testbed for the public launch of the M1 Mac mini, Microsoft is not believed to have any plans to put Project Volterra on general sale.

The company’s future vision is a world in which the type of CPU is less important. It believes the move toward an increasingly AI-powered world will require a mix of local CPU, Neural Processing Unit, or NPU (the company’s equivalent to Apple’s Neural Engine), and cloud-based computing.

We are building toward our vision for a world of intelligent hybrid compute, bringing together local compute on the CPU, GPU, and NPU and cloud compute with Azure.

In the future, moving compute workloads between client and cloud will be as dynamic and seamless as moving between Wi-Fi and cellular on your phone today.

The Mac mini clone is designed to let developers experiment with AI-driven apps.

As we look forward to what is next and how we can further innovate in this space, we are excited to announce Project Volterra, a new device powered by the Snapdragon compute platform. With Project Volterra* you will be able to explore many AI scenarios via the new Qualcomm Neural Processing SDK for Windows toolkit announced today by Qualcomm Technologies.

M1 Macs would be able to natively run Windows for Arm, but Microsoft has so far chosen not to allow this.