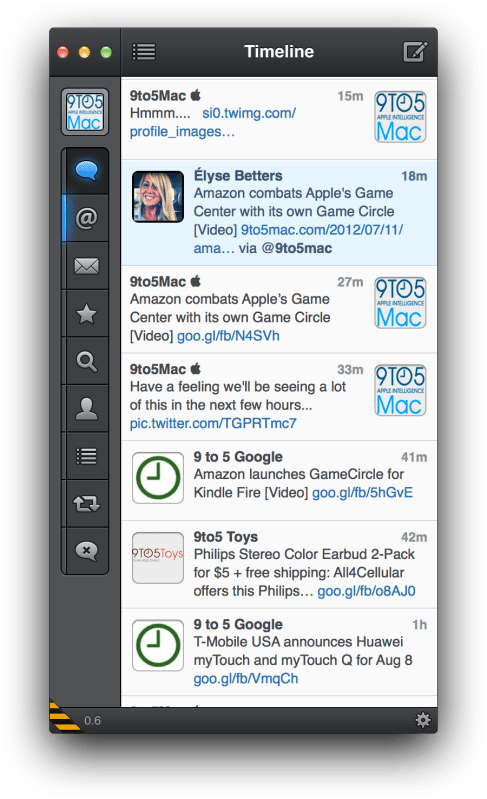 As for how the app feels to use, we did not run into any major bugs in our tests. The small settings cog in the bottom right corner is not working, but it will likely give quick access to manage accounts and access settings like sounds, display, and navigation—similar to the iPad app (those options, and the ability to add multiple accounts, are accessible from within the Preferences menu). You can also quickly switch between accounts by clicking your profile image on the left sidebar. We noticed gestures are supported with one-finger or two-finger swipes (depending on your mouse/trackpad preferences), allowing you to quickly jump to Conversation or Details view for any tweet. The app looks and feels like the official Twitter for Mac client at first glance, but, when compared side-by-side (as pictured above), the Tweetbot client’s UI makes Twitter for Mac feel dated.

Again, like the Tweetbot iPad app, clicking through a tweet in your timeline will take you to a full-page view of the tweet with the ability to view replies by scrolling up (pictured in gallery, above). We did not run into many issues with responsiveness, but the scroll-to-refresh felt a little wonky at times compared to the official Twitter client. Despite being an alpha build, it feels almost good enough to ditch Twitter for Mac. Expect things not to work sometimes, though.

After hours of the app running nearly perfect, we started getting the red notification seen in one screenshot in the image gallery. The notification reads, “Twitter limits the number of requests you can make in an hour. Please wait 49 more minutes and try again.” This is not something we have experienced with Twitter clients, but it is likely an alpha issue. A re-launch or two of the app seemed to fix the issue.

You will be able to pop open a new window with command-shift-n, but Tapbots promised a “much more elegant” multiple windows mode in the future. At this point, there is also no iCloud or Notification Center support, as those features can only be implemented after the app is signed and approved for the Mac App Store. Tapbots promised both features for the final App Store release. The public alpha build is available on Tapbots website, but the devs will not offer any support during the alpha period. Eventually, it will be a paid app when it lands in the Mac App Store. There is no timeframe for a release date at this point.