While it was already known that Apple has pledged $100 million to provide iPads, MacBooks, and other products toward the program for schools across the United States, Apple has shared that Apple ConnectED grants are being received by a total of 114 different schools across the country with these schools spread out across 29 states. Apple added that “92% of students from our partner schools are of Hispanic, Black, Native American, Alaskan Native, or Asian heritage.”

Apple said that every student at a school receiving an Apple ConnectED grant is receiving an iPad while teachers and administrators are issued MacBook Airs and iPads with an Apple TV provided to each classroom.

In addition to the Apple hardware provided, an Apple Education team is assigned to each Apple ConnectED grant school for supporting the effort and integrating the Apple technology into the classroom. Apple said it’s providing each school with “tailored curriculum solutions” that take advantage of the technology and “working with Wi-Fi providers and cellular carriers” to make sure network access is available for delivering digital content.

Educational content partners include Pearson, Scholastic, Houghton Mifflin Harcourt, Lexia, and more while cellular and Wi-Fi partners include AT&T, Sprint, Aerohive, and Education Networks of America. Apple is partnering with eBackPack for its classroom workflow software and JAMF on its mobile device management.

The chart below shows where Apple ConnectED partner schools are located geographically by percentage. 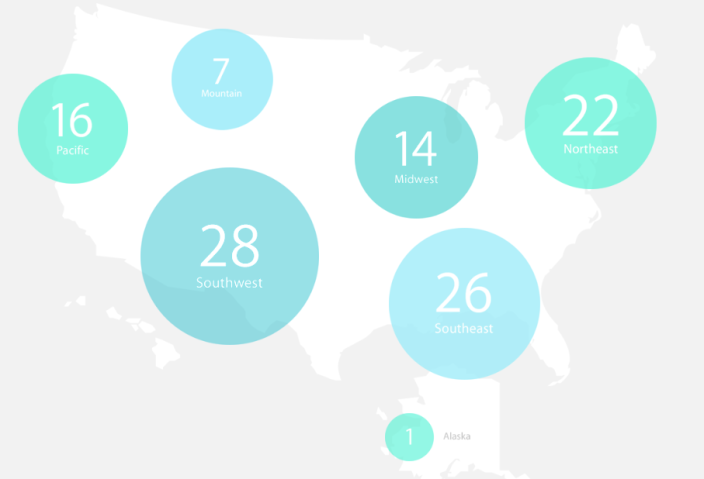 Apple’s focus on education and inclusion is nothing new for the company. Earlier this year the company announced a series of $10,000 Inclusion and Diversity Scholarships for minorities in the technology field. Apple has also focused on its own diversity data with a report released earlier this year that it found unsatisfactory.

The company paid a great deal of attention to its iTunes U software earlier this year with a major update for both students and educators.

You can read more about Apple and the White House’s ConnectED program at apple.com/eduation/connected and whitehouse.gov. Below is the mission statement found on Apple’s ConnectED site.

Education is a fundamental human right for everyone.

And yet, there is great disparity in our schools and education systems. In fact, many schools struggle to provide the basics despite the dedicated efforts of teachers and families.  A lack of equal access to technology and knowledge puts entire communities and populations of students at a disadvantage, especially minorities.

At Apple, we see the results of this and other forms of inequality every day.  Minorities are significantly underrepresented in the technology industry.

We want to do our part to change this.

We want to open the vast potential of all the world’s future inventors, future dreamers, and future leaders.

As a company founded and built on the idea that technology placed in the hands of the many has the power to change the world, we feel it’s our responsibility to act.

As part of our mission, we’re joining President Obama in support of the ConnectED initiative by committing our products, our knowledge, and our passion for learning to 114 schools across the country. It’s an important first step and a bold vision for a richer, more diverse, and more inclusive future.