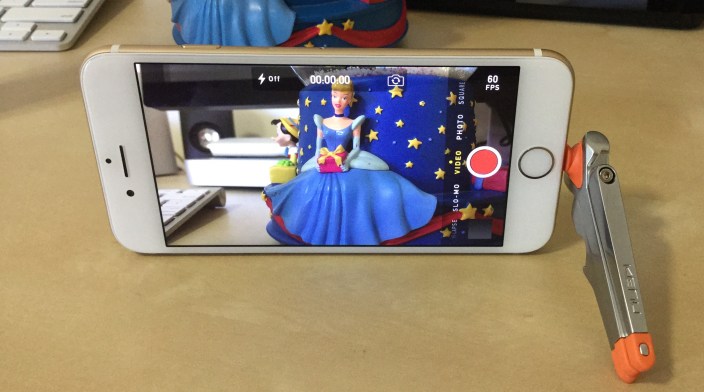 The Stance compact tripod, Kenu’s latest accessory for iPhone, is one of my favorite gadgets I’ve tried out lately. It’s a tiny, pocketable stand for holding up your iPhone during video recording, FaceTime calling, and more. The Kenu Stance attaches to your iPhone or iPod touch by connecting to the Lightning port where you charge your phone, and it locks in securely for standing up iPhone in either landscape or portrait orientation. Check out my hands-on with the Kenu Stance below…

As I mentioned above, the Stance securely attaches to your iPhone or iPod touch with the Lightning port where you typically charge your device. I tried using the Stance upside down (though I wouldn’t recommend doing this over any dangerous surface) and the iPhone remained securely connected.

Using the Lightning port to hold the iPhone is clever as it works with 4-inch, 4.7-inch, and 5.5-inch iPhones without needing to adjust the tripod or remove any case and it keeps the accessory from being larger than it needs to be. The only downside, I found, is that you obviously won’t be able to charge your iPhone while the Stance is attached as the Lightning port is blocked. Just make sure your iPhone is properly charged before setting up to capture a lengthy time-lapse video.

The Stance features a “ball-and-pivot joint” just below the mount so you can rotate your iPhone around or tilt it at an angle to capture a shot. The ball and pivot joint is easy to adjust and can hold the iPhone up at reasonable angles.

For landscape use, the Stance compacts to create a kickstand-like arm to prop up your iPhone. As this is how I typically shoot video, of course, this is how I mostly used it. For portrait use, the Stance features three legs in total for standing up your iPhone in tripod mode. This is really useful for propping up your iPhone during a video call or taking a photo with the iPhone’s timer feature. Because it’s a miniature tripod for your iPhone, you’ll need to find the right surface height before capturing your photo or video, of course, but it’s really handy especially as the iPhone 6’s rounded edges don’t allow you to prop it up on its own as the iPhone 5 did (not the mention the flexibility of adjusting the angle with the ball-and-pivot joint).

Last but certainly not least, the Stance cleverly includes a dedicated bottle opener for uncapping a cold beverage presumably before using the Stance to stand up your iPhone and capture a long time-lapse video or FaceTime chatting with a pal. My only complaint is the lack of some sort of dedicated keychain holder or slot for a carabiner to hook to a bag or belt loop. The Stance really is light enough that I don’t think it would be too obtrusive to carry this way, but it’s definitely compact enough to pocket or drop in a bag without being obtrusive.

The Kenu Stance is compatible with the latest generation iPod touch, iPhone 5, iPhone 5c, iPhone 5s, iPhone 6, and iPhone 6 Plus as it attaches to the Lightning port. Because of its pocket-friendly size, however, it’s not designed to support the iPad mini or iPad Air.

The Kenu Stance Tripod for iPhone is available starting today for $29.99 on Kenu.com. You can also check out Kenu’s other products on Amazon including its Airframe+ that I recently tried out. The Stance a great accessory to have around for shooting photos or videos with your iPhone, and it’ll make a great gift for other iPhone owners.