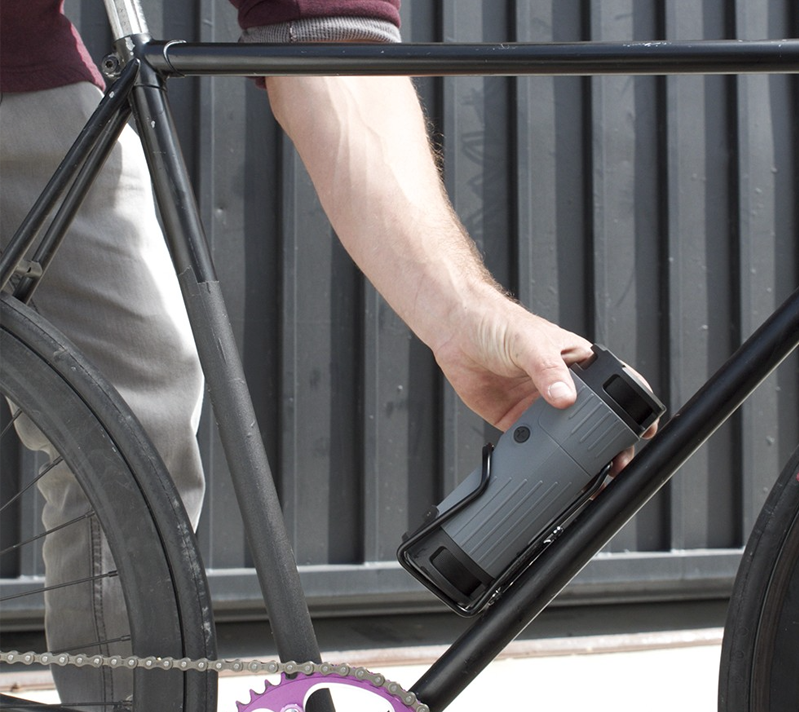 You can scarcely turn around these days without bumping into a new Bluetooth speaker. We’ve reviewed many of them.

The Scosche BoomBottle manages to set itself apart from the crowd, however, by targeting one specific market: cyclists. The speaker is the same size and shape as a large drinks bottle, so it fits into a standard bicycle bottle cage – and it’s weatherproofed, to survive the elements. I took it for a spin …

The BoomBottle is a ribbed, grey cylinder topped with black speaker grilles at each end. The casing has a smooth, rubbery feel to it, with a little bit of give if you press hard – which Scosche describes as ‘shock-absorbing.’

The speaker is around 8 inches long by a little under three inches in diameter, and fitted well (and snugly) in the bottle cage on my main bike.

There are just three controls, each a decent-sized rubberized black button you can operate with gloved hands. One is a multi-function control I’ll get to in a moment, the others are volume up and down. There’s a single, recessed blue LED beneath the multifunction button.

At the rear of the unit is a rubber flap covering a microUSB port for charging, together with a 3.5mm line-in socket in case you want to use it as a wired speaker. 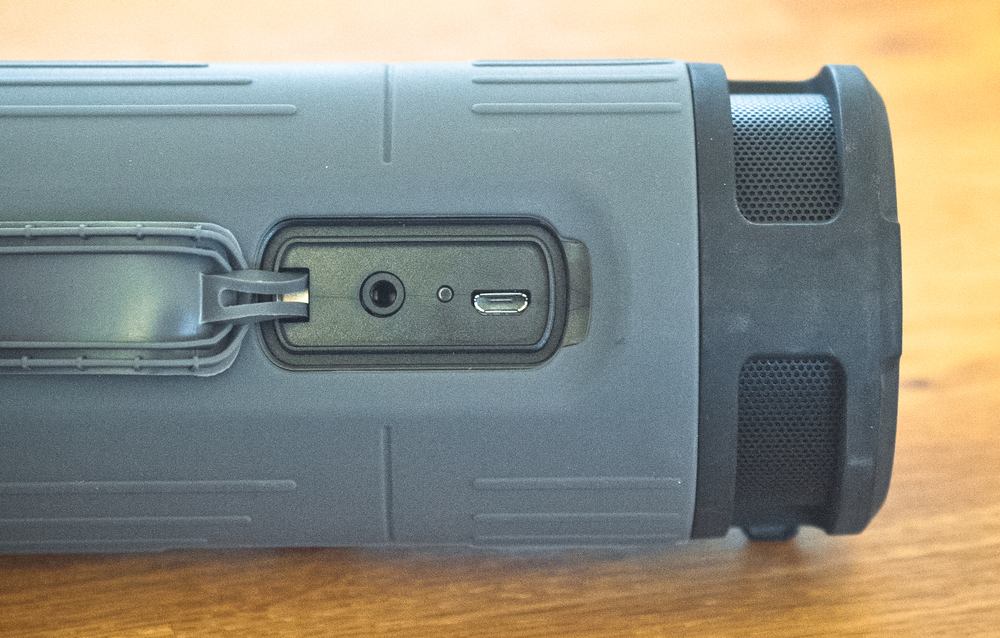 Looking at the grilles, the BoomBottle appears to have six separate speakers, three at each end, giving 360-degree coverage. In fact, there is just one main speaker at each end – a 40mm driver – with a diffuser to spread the sound out evenly in all directions. 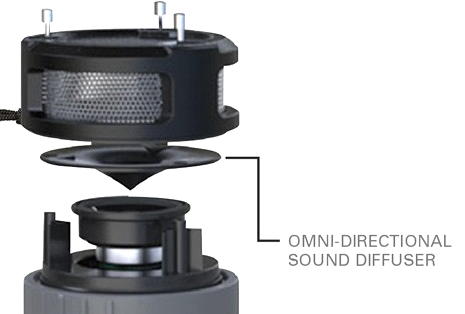 There’s also a passive subwoofer hidden inside the casing, to provide bass. 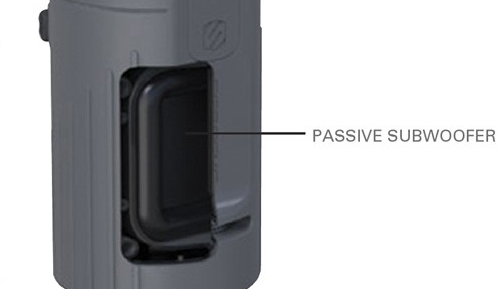 The main multifunction button acts primarily as pause/play. However, you can double-press to act as a ‘next track’ button, and triple-press for ‘previous track.’

The volume buttons are easy to find by feel, keeping your eyes on the road, and easy to operate even in winter gloves.

The instructions also describe a voice-operated mode but say that it doesn’t work with all phones. It didn’t work with my iPhone 6, but I can’t say this bothered me – the buttons work well.

The rubberized feel of the casing inspires confidence. The exposed grilles do look slightly vulnerable until you see the above cutaway and realize those are not actually the speakers.

The unit is certified to IPX4, whose official description is ‘splashproof.’ This means it should cope with most weather, but perhaps not driving rain. You also shouldn’t expect it to survive being dropped in water.

I used it during typically rainy November weather in London and it survived the experience quite happily.

Scosche claims ten hours in use, with a three-hour charge time.

My usage was too intermittent to accurately assess total life – my typical city ride is less than 30 mins at a time – but it was certainly in that kind of ballpark. The charge time definitely met the three-hour claim.

Again, the small speaker grilles are deceptive, not leading you to expect too much in the way of volume. But the 40mm drivers certainly do the job, generating as much sound as I would ever want while cycling.

When I first tried the speaker in my office, I found the quality biased a little too much towards bass for my tastes – I prefer my speakers as neutral as possible. But once on the bike, with all the competing noise, I found the sound came into its own.

My city riding bike is a Brompton: 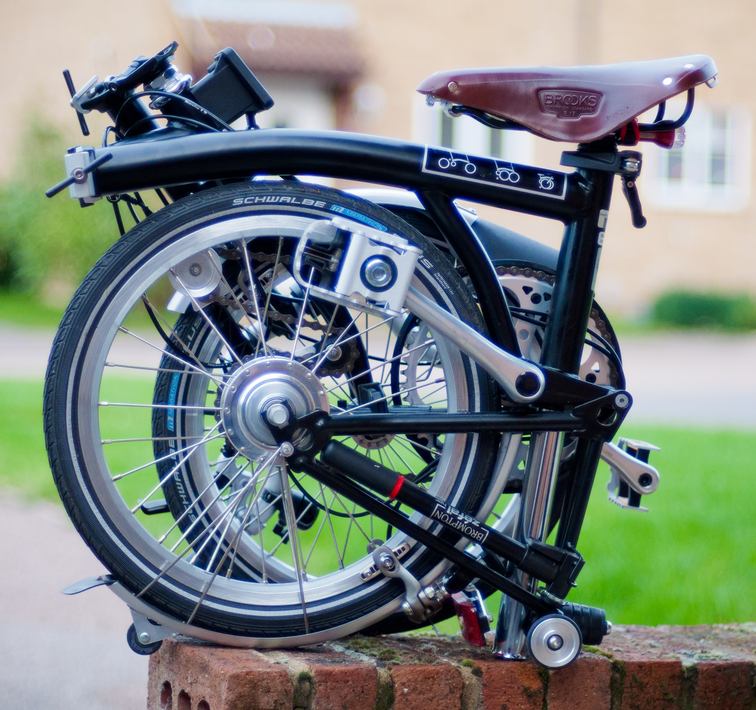 While you can add a bottle cage without affecting the fold, I prefer to keep the folded package as compact as possible, so I used the speaker in the mesh drinks pocket of my front-mounted bag. As the speaker grilles were partially obstructed by the bag, I had thought the volume might drop noticeably, but the diffuser system meant that any sound that couldn’t escape one way got redirected, so volume was unaffected. 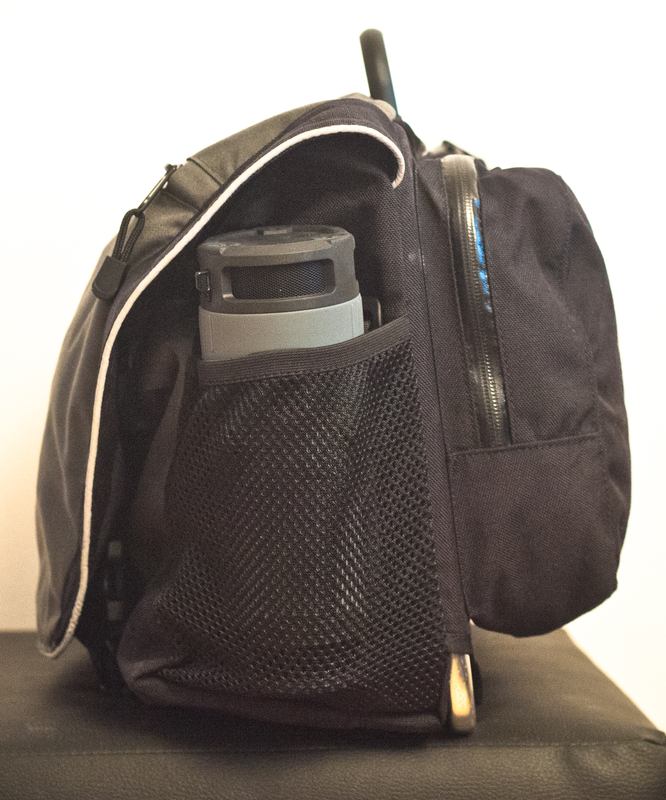 The BoomBottle also doubles as a Bluetooth speakerphone, but for some reason the call volume is much lower than the music volume, even with both iPhone in-call volume and speaker volume set to maximum. But I’m not really a fan of cycling during calls, preferring to pull over, so wasn’t personally too bothered about this.

At $149 RRP, this isn’t the cheapest of cycle accessories, but you can typically find it on Amazon for a more wallet-friendly $100. I have a couple of friends who have cable-tied cheap Bluetooth speakers to their bikes, and they kind of work, but I have to say I think the BoomBottle is worth the extra cash.

The volume is much higher than you get from most of the cheap-and-cheerful Bluetooth speakers around, and you really do need that when riding in the city. And if you’re an all-weather rider, as I am, then the weatherproofing is reassuring.

I can’t recommend it as a speakerphone, but if want you want to do is enjoy your music while cycling, come rain or shine, the Scosche BoomBottle is a solid product.

The Scosche BoomBottle is available in a range of colors on Amazon for $99.99.