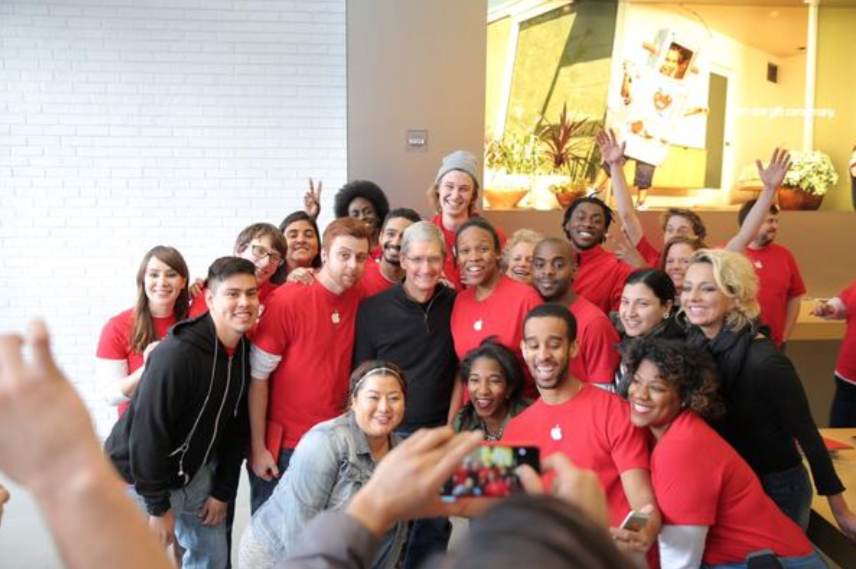 Apple CEO Tim Cook tweeted a couple of photos of a visit yesterday to the Apple Store in Georgetown, Washington DC, to help promote World AIDS Day. He was accompanied by (RED) CEO Deborah Dugan, who tweeted a couple of additional photos from the visit (show below) …

Cook tweeted that Apple Stores around the world were RED, a reference to white Apple logos being replaced by red ones, and staff wearing red t-shirts.

(RED) CEO Deborah Dugan noted in her tweet that Apple has so far raised $75M for the charity.

This is, however, a number Apple released back in June, so will presumably be significantly higher following the holiday sales weekend. We’ve asked Apple for an updated figure.

Apple supported (RED) by donating a percentage of sales from both retail and online sales on Black Friday and Cyber Monday, as well as the full proceeds of in-app purchases from Garageband until 7th December.

The company also took the unusual step of sending a push notification to iOS users promoting the Apps for RED programme – a move that led to a certain amount of debate on Twitter. Some developers and Apple commenters objected on the basis that App Store notifications are opt-out, meaning that most iOS users receive them while third-party app notifications have to be opt-in. Others viewed it as a worthwhile step to promote a good cause.

Apple’s (RED) notification defies its own guidelines for App Store approval, which do not allow push notifications to be used for promotional purposes. However, many apps ignore the guidelines and Apple does not typically enforce this, and Apple effectively joining in may be seen as legitimizing the practice.