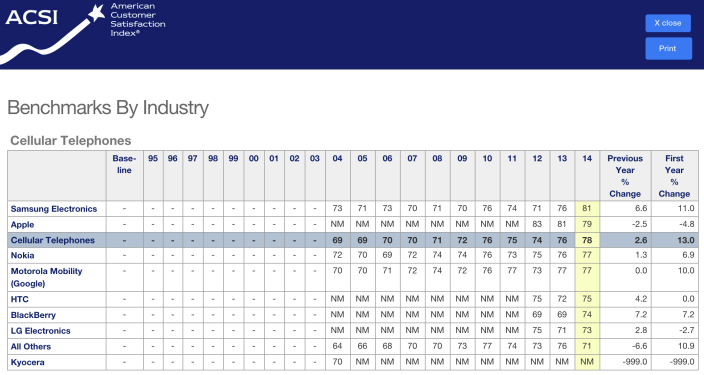 One of Apple CEO Tim Cook’s favorite terms to throw around during earnings calls and keynote presentations is “Customer Sat,” but the latest from the American Customer Satisfaction Index (via BGR) has Apple down compared to last year while Samsung continues to rise despite declining sales.

Note that these numbers were first revealed back in May.

While Apple still sells nearly twice the number of smartphones in the United States as its nearest competitor, Samsung now comes out on top in one critical metric— customer satisfaction. Samsung surges 7% to an ACSI score of 81, beating Apple in overall customer satisfaction for the first time. Smartphones are becoming more dominant in Samsung’s cell phone product mix, pushing its satisfaction score higher. Apple declines for the second year in a row (-2% to 79), and the field is getting tighter, with Motorola Mobility and Nokia (now Microsoft) both at 77.

BlackBerry has seen its market share nearly vanish, but satisfaction climbs to 74 (+7%) for those customers that remain. “Samsung has gone from up-and-comer to top-of-the-heap on the strength of its smartphone portfolio,” says VanAmburg. “Apple’s magic isn’t gone, but the luster has dulled on its older models. Each iteration improves on the last, but Apple’s year-long product refresh cycle is an eternity when a new Android phone seems to be released every week.”

Apple comes in on the index measuring Cellular Telephones at a score of 79, a -2.5% change from last year and just slightly above the average 78 score for all cell phones measured in the index. Apple is still tops in Tablet and Personal Computer Satisfaction according to ACSI.

While Samsung has been steadily reporting a drop in mobile profits as it restructures its mobile division and sales of its Galaxy branded devices continue to decline, the ACSI gave the company an 81 score marking a 6.6% increase from last year. Following Samsung and Apple to round out the top 5 positions are Nokia, Motorola, and HTC.

We could only speculate what might have contributed to the decline in customer satisfaction for Apple this year, but the latest stats on sales of smartphones for Apple vs Samsung certainly doesn’t reflect the ACSI’s findings. Earlier this month Gartner reported that Apple continued to see growth of iPhone sales and overall marketshare in Q3 at the expense of marketshare for Samsung and others.