Investors and analysts will have an opportunity to ask Tim Cook and company questions during the earnings call, and we’ll be listening closely to bring you coverage.

– Welcome music is also live for any listeners. Follow along at home or refresh for highlights from the call here. Should begin at the top of the hour.

– Apple up in after-hours trading: 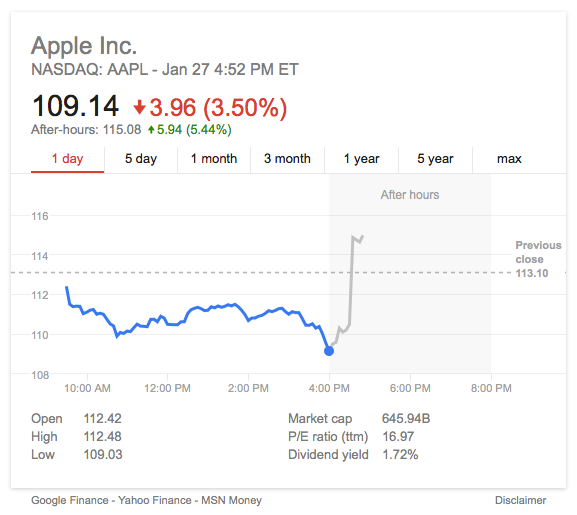 – About 750 banks and credit unions signed to bring Apple Pay, $2 out of $3 spent using contactless payments made with Apple Pay

– Says supply and demand balance reached this month for iPhone

– First question about currency: Luca says Q1 growth revenue would have been 4% higher without currency fluctuation

– Question about iPhone 6 and iPhone 6 Plus mix, Cook won’t break out numbers but says iPhone 6 most popular iPhone last quarter, says some geographic areas prefer iPhone 6 Plus but not consistent around the world

– Apple Watch question about timing and expectations, Cook says his expectations very high, he can’t live without it, Apple making great progress on development of it, many developers writing apps for it

– Gene Munster asking about update on Apple TV and the living room, Cook says over 25 million of the current product sold, up from 20 million in April 2014,  now talking Apple Pay, Cook says shocked how many merchants were able to implement Apple Pay during the holiday season, says this is the year of Apple Pay

– On iPhone growth, Cook says a small fraction of install base has upgraded (in the mid teens) so far, Android and non-smartphone owners big opportunity

– That’s a wrap! Replay will be available on iTunes shortly.