Apple Online Store goes down ahead of Spring Forward event 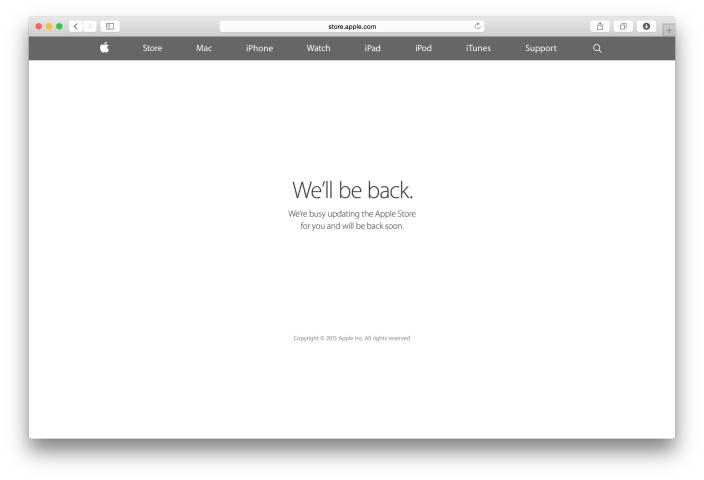 The Apple Store is down, in preparation for announcements later today at Apple’s Spring Forward event. The store going down is a very strong indicator that something new will be available to buy after the event is over — but what products? The most likely answer is new MacBooks.

There is also the potential of Apple Watch preorders, although these are more likely to take place in a couple of weeks, assuming an April launch.

The 13-inch MacBook refresh reported here are the most likely reason as to why the Apple Online Store is now saying ‘We’ll be back soon’. These products seem to be the most likely to be ready to ship immediately after announcement. There is also a good chance that this product refresh may not even feature during the presentation, but appear online afterwards as as silent update.

Many are speculating that Apple will announce the 12-inch Retina MacBook Air later. Depending on Apple’s intended release schedule for the machine, it could also be available to buy today. The Wall Street Journal reported last week that the new MacBook Air is planned to debut sometime this quarter.

Follow all our coverage from 10 AM PDT, 5PM UTC. Apple will also be streaming the event live on apple.com/live.