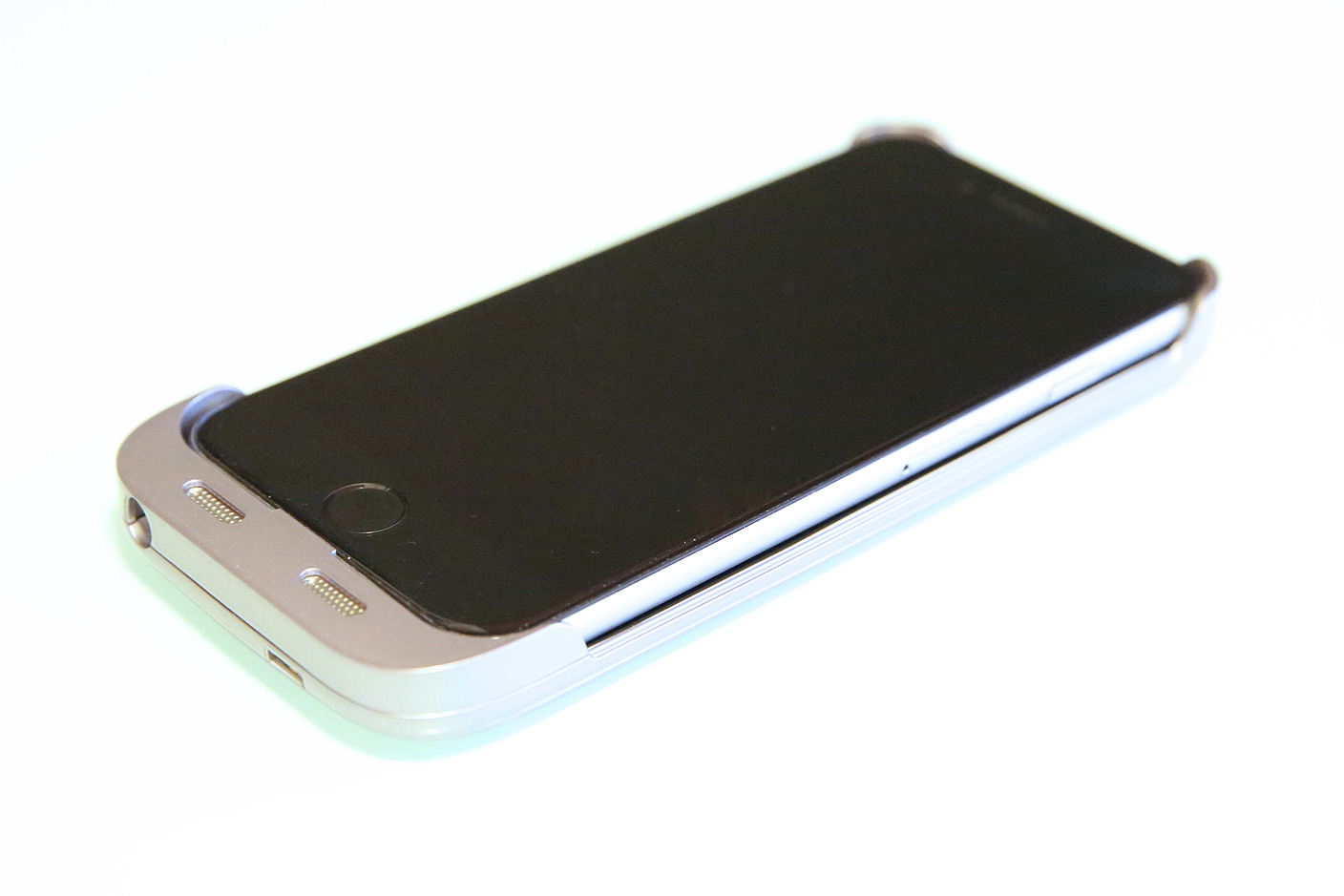 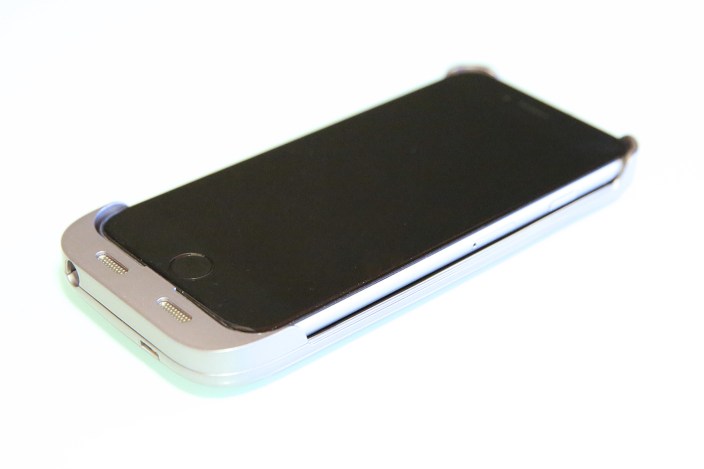 Since late last year, the best iPhone 6 battery cases have generally included two things that iPhone 6 users now take for granted: enough spare power for at least one complete recharge, plus adequate coverage for the iPhone’s top, bottom, and back, if not its sides. PowerSkin has gone in a somewhat different direction with Spare for iPhone 6 ($80), a battery sled that caters to iPhone users who want less of everything. With a small 2200mAh cell inside, it’s the lowest-capacity battery case I’ve seen for the iPhone 6, and also offers the least body coverage, but sells for about the same price as more capacious and protective rivals.

Lightweight and marginally easier to pack in some bags than some rival battery cases, Spare is here for users who want a partial iPhone 6 recharge and anti-drop protection, but no anti-scratch safety. It’s offered in silver, gold, or space gray, currently ranging from $70-$72 based on your color preference. PowerSkin claims that it will deliver a 100% iPhone 6 recharge, but our testing found otherwise… 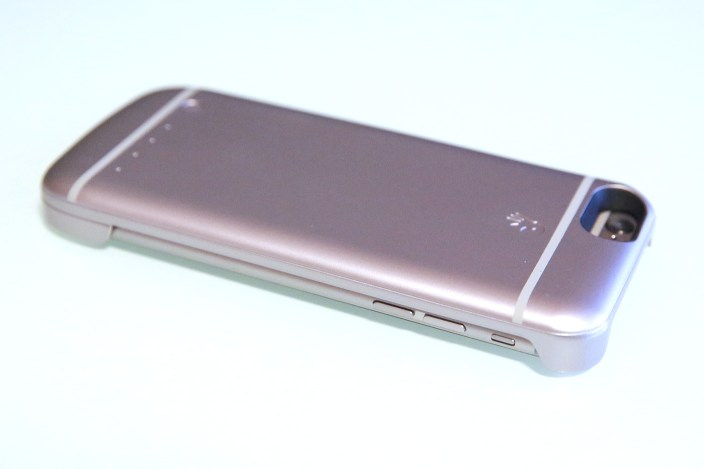 Unlike most of the matte black battery cases I’ve previously reviewed, Spare’s design mimics the iPhone 6’s. The majority of the case is nicely color-matched metallic plastic, interrupted by two matte bars on the back in roughly the same places as Apple’s antennas. By comparison, the case’s front has a glossy finish, a material that could have looked cheap, but doesn’t draw undue attention since there’s so little frontage to be seen. While most iPhone 6 battery cases provide top and side coverage, PowerSkin leaves those portions of the device uncovered, instead opting for oversized corner grips that extend a millimeter beyond the iPhone’s screen. This enables the corners to absorb shock from drops, as well as to keep the iPhone firmly in place. 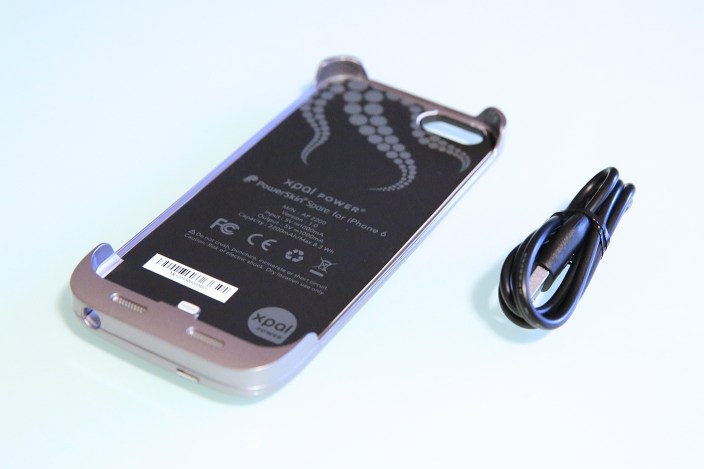 Beyond limiting the case’s coverage, PowerSkin was somewhat sparing with Spare’s pack-ins. Although a micro-USB cable is included for recharging, no extension cable is packed in to provide easy access to the iPhone 6’s recessed headphone port hole. These little extenders are cheap and fairly common, but you’ll need to grab one on your own if you’re using a headphone plug that’s larger than Apple’s super-svelte connectors. 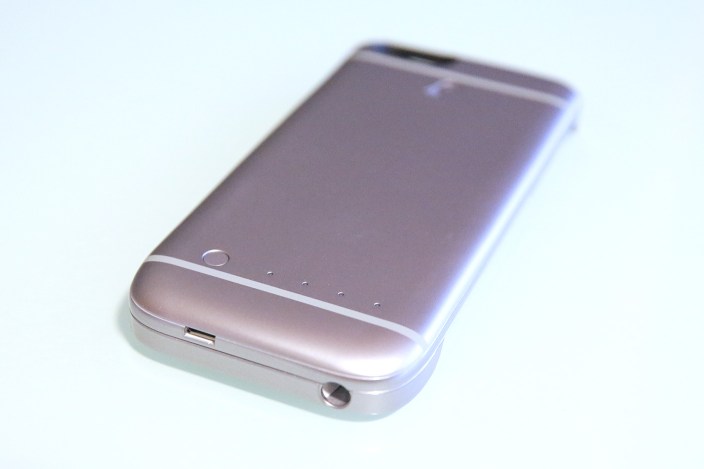 From a performance standpoint, Spare is underpowered relative to other iPhone 6 battery cases I’ve tested. Four power indicators on the back glow blue as the case itself is charging, but remain off while an iPhone’s recharging inside, unless you press a circular button to indicate the remaining power. PowerSkin promises that Spare’s 2200mAh cell will achieve a 100% recharge of the iPhone, which was hard to take seriously since rivals such as OtterBox’s Resurgence just barely hit the 100% mark with 2600mAh cells. In my testing, Spare fell short, bringing a dead iPhone 6 back to only 83% before dying. That’s about what I would have expected from a 2200mAh battery, but there was always the chance that PowerSkin had some super-efficient charging circuit (or actually larger cell) inside. Clearly, that wasn’t the case with Spare. 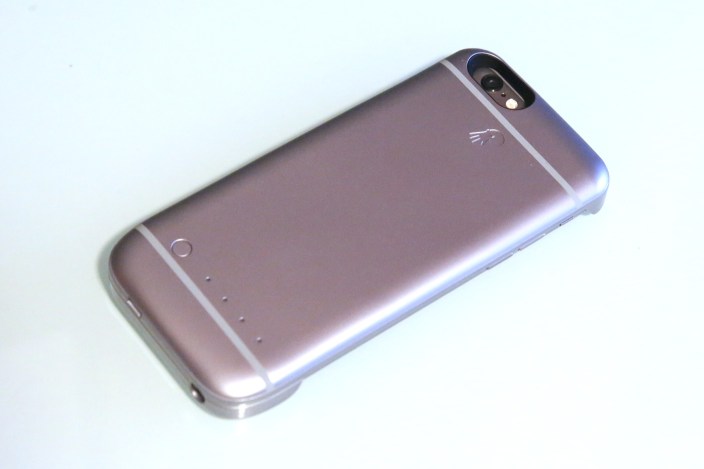 Having reviewed so many other, more powerful iPhone 6 battery cases, I’d say that Spare would make the most sense at a markedly lower price point than its increasingly numerous rivals. Between its so-so 2200mAh capacity and limited device protection, there’s not enough here to justify either the $80 MSRP or the current $70+ prices available online. The same dollars (or fewer) can buy a much more protective and higher-capacity Incipio offGRID Express, just to name the best of the other options I’ve tested. Even PowerSkin’s Lightning-equipped case-free version, PoP’n 3, offers higher battery capacity for only $55. But if Spare’s price falls, as most of its competitors have, it may be worth a second look.