Up until now, Bluetooth wireless audio was purely optional for Apple’s devices: every iPad, iPhone, and iPod has shipped with a 3.5mm audio port to connect with wired earbuds and headphones. The Apple Watch is different: it’s Apple’s first fully wireless device, with no user-accessible ports to connect accessories, even though it can work as a standalone music player during workouts. The lack of a headphone port is actually a positive, since tethering your wrist to your head with a cable would look silly, and isn’t ergonomically ideal. Thankfully, Bluetooth headphones have come a long way over the past few years, shrinking from gangly and boxy earmuffs into earphones comfortable enough to exercise with.

Since one of the Apple Watch’s major selling points is fitness functionality, this quick guide to the best Apple Watch headphones and earphones focuses mostly on accessories that can work anywhere, rather than options you can’t wear while exercising. But I’ll include some larger options, too, just in case you’re picking a pair for non-athletic use, or to share with your iPad, iPhone, iPod, or Mac… 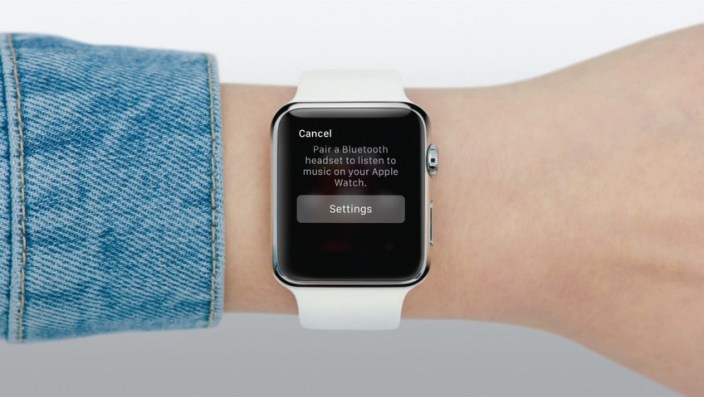 How Do Bluetooth Headphones Work With Apple Watch?

Apple’s Guided Tour of the Apple Watch’s Music application shows two different “source” modes that the Watch can operate in: “Apple Watch” or “iPhone.” Once you sync music (a playlist, or up to 200 songs) from your iPhone directly onto the Apple Watch, you go into the Music app, Force Touch to select Source, then pick Apple Watch. 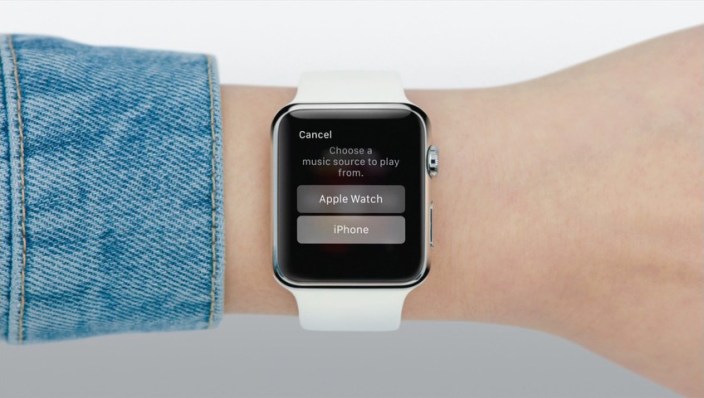 If you haven’t already paired Bluetooth headphones with your Apple Watch, you’re then prompted to go into Settings and pair your devices. Of course, Apple spotlights its recently-acquired Beats headphones and speakers during the video. 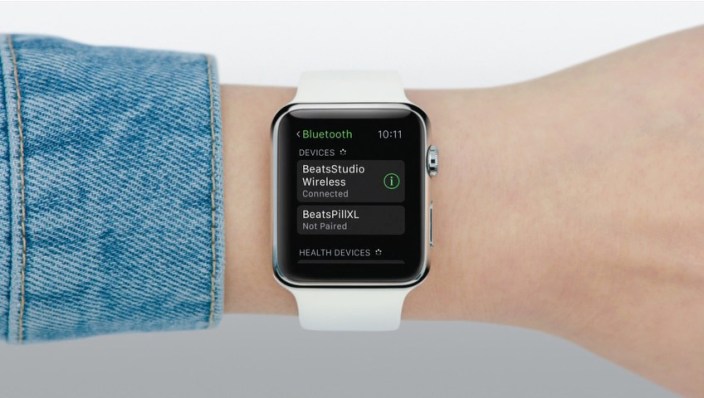 All you need to do is tap on the Bluetooth headphones you want to listen with, and music will play through them. Pretty simple.

Which Bluetooth Headphones Are Good Matches For Apple Watch?

One of Apple’s official options, Beats by Dr. Dre’s Powerbeats 2 Wireless ($200), is stylish and specifically designed for athletic use. IPX4 sweat- and water-resistant, it uses ear hooks to keep the dual-driver earphones close to your ear canals no matter what. You’ll get 6 hours of battery life from a full charge, with a quick charge feature to restore 1 hour of run time in only 15 minutes.

Plantronics’ BackBeat Go 2 ($60) is an ultra-affordable pair of Bluetooth earphones with some limitations. Put aside the wonderfully appealing price point, and you’re looking at very lightweight, comfortable, sweatproof in-ear headphones that can be left around your neck and used anywhere. On their own, they promise 4.5 hours of battery life — a little optimistic — but a charging case (sold in a premium bundle) can keep them going for 14.5 hours. While they have an integrated microphone, it doesn’t work well outdoors, and the ear stabilization isn’t as resilient as in some rivals.

JayBird’s BlueBuds X ($126-$156) effectively redefined the Bluetooth earphone category, as the first pair of wireless in-ears to look and feel virtually identical to wired in-ears — like the BackBeat Go 2, they squeeze their wireless transmitters and an 8-hour battery into relatively small housings. BlueBuds X has the edge on optional ear stabilization, though, as well as microphone performance, and has a lifetime warranty against sweat damage. The prices vary based on the color you pick.

If ear stabilization isn’t critically important to you, but you want to filter out ambient gym noise, Sony’s new MDR-EX31BN ($90-$92) uses a clip-on capsule to offer active noise cancellation and extended run time. The noise-canceler promises 98% reduction of nearby sound, with a nearly 10-hour rechargeable battery. White, red, and black versions are available, all with very good audio quality for the price point.

Bose hasn’t yet released a pair of in-ear wireless headphones, but its SoundLink Around-Ear ($250, left) and SoundLink On-Ear ($250, center and right) are very highly-rated larger headphones, obviously not designed for athletic use. Both have built-in microphones for phone calling, though they notably don’t have the active noise-cancellation circuitry found in Bose’s QuietComfort wired headphones. The On-Ears offer 15 hours of play time, versus 7 hours of play time for the larger Around-Ears.

Apple’s over-ear Beats Studio Wireless models ($335-$360, left and center) are some of the most expensive Bluetooth headphones on the market, but they’re also amongst the best-looking. Like the Bose SoundLinks, they’re not designed for athletic use, but have plenty of other assets, including active noise cancellation, a collection of great colors/textures, and a 20-hour run time between recharges. They’re also ultra-comfortable. The smaller Beats Solo 2 Wireless ($236, right) preserves much of the same styling in an on-ear footprint, delivering 12-hour battery life without active noise cancellation.

Check out our other Apple Watch roundups: