The best travel accessories for your MacBook Air, MacBook Pro, or Retina MacBook 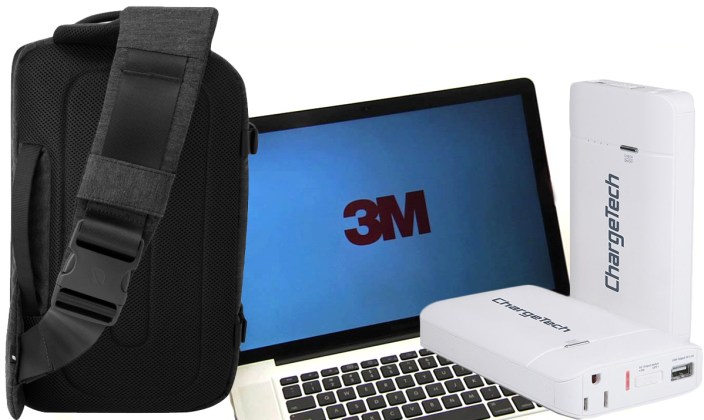 Traveling with any MacBook is a lot easier today than it was five or ten years ago. Apple’s latest laptops consume much less space than their predecessors, and last much longer when they’re in active use. Whether it’s on a seat-back tray or resting in your lap, your MacBook can deliver quite a few hours of productive work time, video viewing, or even gameplay without assistance. But it can do even more if you bring the right accessories along.

My goal is to help you choose the best items to carry with you on the road — the type of items I’ve spent years testing. The picks below are highly practical and focused to make good use of space and address real-world concerns that many travelers have. Read on!

The Best Way To Protect Your Privacy. If you’ve ever tried to work or look at private files on a plane, train, or bus, you’ve probably noticed that some other passengers are craning their heads to check out your MacBook’s screen. There are some passive-aggressive approaches to dealing with this, but the simplest solution (apart from closing your Mac) is a privacy filter — a piece of form-fit film that can be placed on the screen to limit off-angle visibility. The #1-ranked option is 3M’s Privacy Screen Protectors ($26-$36/MacBook Air, $37/13″ Retina MacBook Pro, $37/15″ Pro. $28-$45 non-Retina Pro), which are normally sold in clear or black, but also offered in gold. Viewed straight on, they look substantially clear — a little tinting is obvious — but from the side, the screen looks partially or entirely black, depending on the viewing angle, with enough fuzziness to obscure the details of whatever you’re looking at.

The Best Travel USB Cable. I’ve carried a lot of USB cables around over the years, almost always for two types of devices: Apple devices and related accessories. These days, all of Apple’s iOS devices use Lightning connectors, and all of their accessories use Micro-USB cables. The easiest way to save space is to combine both of those cables into one, and the best of the combined Lightning and Micro-USB cables I’ve tested is Dodocool’s 2-in-1 Lightning/Micro USB Cord ($13). I strongly, strongly prefer licensed Lightning cables to generics, and this thick cable has proved very resilient in my travels. With a full-sized USB plug on one end, the other end has a Lightning connector there when you need it, pulling off to reveal a Micro-USB plug when necessary.

The Best International Travel Adapter. If you’re traveling overseas, being able to refuel your MacBook when you arrive in another country is critically important. Once you’ve packed the wall adapter that came with your MacBook, there are three options to consider: cheap, fancy, or powerful. If you want nothing more than a simple adapter, the least expensive option is a set of easily detachable wall plugs such as Bestek’s Grounded Universal Plug Set ($15). Get the whole set, pick the one that you need for a given trip, stick it on the end of your MacBook’s wall charger, and leave the rest behind for later adventures. Apple’s official option is the World Travel Adapter Kit ($40), which is the most compact because it replaces the wall plugs on your MacBook’s charger, rather than adding something on top of the existing plugs. The most deluxe is Twelve South’s PlugBug World ($45), which comes with both replacement international wall plugs and adds a 2.1-Amp USB port for only $5 more than Apple’s kit. This could be especially handy for users of Apple’s new 12″ Retina MacBook.

The Best Spare Power Solution – A Portable Power Outlet. When you’re running out of power in the middle of a flight, train ride, or bus trip, figuring out a way to keep your MacBook alive can be a challenge. MacBook Air and MacBook Pro laptops require Apple’s official wall adapter and MagSafe connector for charging, which limits your on-the-go refueling options. My strong recommendation is ChargeTech’s ChargeAll, which gives you a portable AC power outlet that can be carried anywhere. The 12,000mAh version ($150) can power a 13″ Retina MacBook Pro for just under 5 hours, while the 18,000mAh version ($200) works for over 7 hours, and has twin 2.4-Amp USB ports for iPad and iPhone charging. For Apple’s Retina MacBook, you can use your choice of ultra-high-capacity battery packs (my favorite is Anker’s Astro E7), any of which can be used with a USB to USB-C cable to power the 12″ MacBook.

The Best Little Travel Drive. I tend to take a lot of photos (and at least some videos) when I’m traveling, and given the limited amount of space on my MacBook, a spare drive for holding overflow content is always handy. The one I’ve recently fallen in love with is Seagate’s Seven ($95, review here), which is covered in steel and billed as the world’s thinnest 500GB portable hard drive. Bundled with a USB 3.0 cable and capable of fitting pretty much anywhere — it’s smaller than an iPhone 6 Plus — it has enough storage space to hold a gigantic photo and video library on its own, tucking away in your bag when not in use. As prices of solid state drives (SSDs) continue to come down, however, traditional hard drives will need to be as thin and affordable as Seven to remain relevant.

The Best Carrying Case. There’s no single laptop bag that’s right for every user; the designs vary a lot in style, size, and features. But I’ll give you a few pointers that will help you choose something that’s going to work the best for you over time. Any bag you buy should have a dedicated, padded compartment for your MacBook. Preferably, it will have several compartments to carry accessories such as the ones shown above, including a couple of relatively large pockets capable of holding the MacBook’s wall adapter and a spare battery if you’re buying one. It should zipper closed for security, come from a company with a history of quality manufacturing, and be easy to carry in the way that you feel most comfortable toting around several additional pounds worth of stuff. Estimate that your MacBook, adapter, and supplies will add between 4 and 6 pounds of weight to your back or shoulder.

I personally love Incase’s DSLR Sling Pack ($90 with free shipping), because I always travel with a camera and laptop; this one fits both MacBook Airs and the 12″ MacBook, but is a very tight squeeze for my 13″ Retina MacBook Pro. Despite that fact, the build quality is so excellent that the zipper and exterior have remained intact for years despite holding all sorts of computer and camera gear. There are many, many other laptop-ready options out there in several major styles, including Messenger Bags, Backpacks, Briefcases, and Purses like the ones shown above. Just make sure the bag you pick has the combination of security, space, and practicality you need.