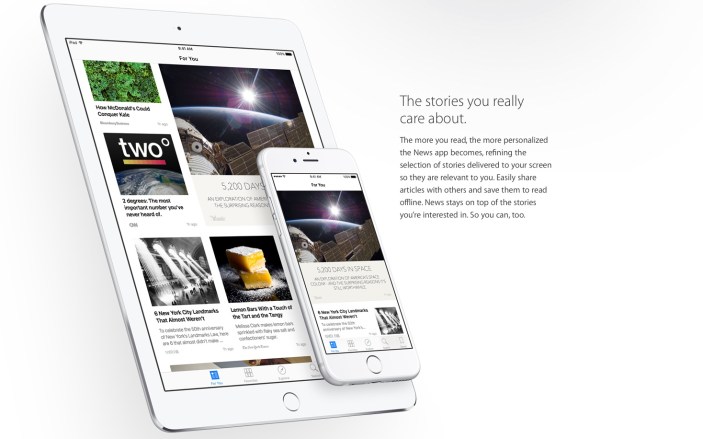 Apple hasn’t talked about it publicly, but the company is hiring human editors that will curate content for its upcoming News app and work with publications to quickly surface breaking stories.

When Apple showed off its News app coming to the US, UK, and Australia with iOS 9, it didn’t say much about how the content would be curated beyond publishers submitting their own RSS feeds. At first Apple is just pulling in news from RSS feeds ahead of rolling out publishing tools for creating rich content specifically for the platform, but how will the company present the news to readers? Who will get front-page billing? How will categories and breaking stories be presented? We get a few of those answers in a new job listing from the company seeking human editors for the platform, but there are still questions regarding how Apple will overcome the curation issues it deals with on the App Store for the News platform.

Apple’s job listing notes that News editors will be responsible for gathering “the best in breaking national, global, and local news.” They will also be working firsthand with publications to “drive relationships with some of the world’s leading newsrooms, ensuring that important breaking news stories are surfaced quickly, and enterprise journalism is rewarded with high visibility.” And Apple won’t just be curating stories from the big players. It also mentions a focus on surfacing original content from “the largest to the smallest” publishers. News editors will also track social media for breaking stories, according to the job listing, and “recognize and communicate key content trends to senior management.”

So Apple won’t be relying on algorithms for News, admitting in the job posting that software alone won’t be able to “recognize original, compelling stories” beyond breaking news to curate stories and categories for readers. While Apple’s reasoning for human editors — to present compelling content to readers that its algorithms have a tough time detecting — is valid, it does bring up the question of how Apple could control what we see and how we see it if its News app becomes popular with readers and attracts a large number of users away from competing aggregation services like Flipboard, Reddit and Techmeme.

Techmeme‘s founder Gabe Rivera gave us the hard truth on why being an algorithm-based service like Google News doesn’t make sense for the Apple News app saying, “All news aggregators intended for the mass market need editors, so this makes sense for Apple.” But the flip side of Apple’s human-based curation is that without a separation of editorial and the business, there will undoubtedly be conflicts of interest. Rivera points out that “…as the world’s most valuable corporation, they can’t and shouldn’t be trusted to present well-rounded coverage on many important topics.” Rivera continues, “But most readers won’t care about that.”

Flipboard took a more cautious tack when discussing the matter of aggregation. Marci McCue, head of marketing at Flipboard told us:

…you’ll see us continue to invest in people curating on Flipboard – not just our own editorial staff. That’s why the product is so diverse and the quality of stories can be so rich. Flipboard has evolved from our v1 launch in 2010, where it was a small team here doing all the curation for categories, to now, where there are millions of curators adding content from amazing sources around the web and organizing the content into Flipboard Magazines.

The idea is that someone who is an enthusiast on something niche – like aerospace for example – https://flipboard.com/@pabloxmarcel/aerospace-902ahcmfz – can curate a Flipboard Magazine and then what they are sharing gets indexed by us to add to the amazing content you can find on Flipboard. It’s a truly social magazine platform – not just something we curate for you.

After years of user complaints about App Store charts and categories being one-sided thanks to algorithms that developers often took advantage of to manipulate the app lists, Apple has in recent years added more human curating to the App Store and revamped sections of its app marketplace to put the focus back on quality content versus popularity and download stats alone. Most recently it switched to editorially curated lists for App Store game categories for the first time and announced its upcoming Apple Music service that heavily relies on human curation including a 24/7 streaming radio station with hand-picked programming and live hosts.

Curating lists of apps is one thing, but having Apple employees curate the news flow could be more controversial depending on how the company ultimately works with select publishers and surfaces content from its preferred sources.

Updated with statements from Techmeme and Flipboard