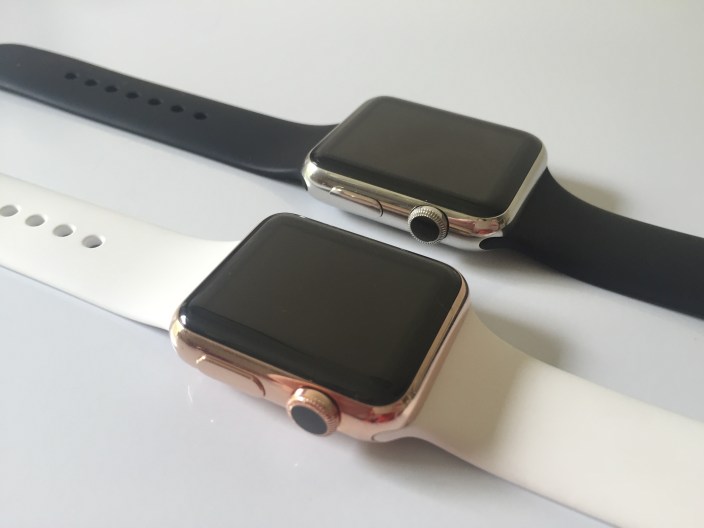 A new report out from KGI’s Ming-Chi Kuo includes some interesting details about Apple’s planned fall product releases. Firstly, Kuo expects iPhone shipments to fall in the current quarter as anticipation builds for the new iPhone dubbed the ‘iPhone 6s’, although apparently ‘Force Touch yields are low’ which may constrict availability at the beginning. For Apple Watch, following a report earlier in the year to expect new materials for Apple Watch casings, Kuo claims Apple will launch new Apple Watch Sport color options to match the new iPhone.

This includes anodizing aluminum in either yellow gold or rose gold to match the gold options on the iPhone 6s and create a faux-Edition Sport model. Third-party coating services already exist for the Apple Watch (pictured above), but Apple’s additions would seemingly be for the aluminum, not steel models.  KGI believes Apple shipped a “tepid” 3.9 million Apple Watch units to date.

There is also news of a new iPad mini covered in KGI’s report, as well as sales estimates for all of Apple’s products ahead of the earnings calls on Tuesday.

The new iPad mini will essentially be a smaller version of the iPad Air 2, with additional improvements to thinness and lightness as well as updated internals. KGI does not mention anything about new iterations of the iPad Air 2 or rumored iPad Pro but he also does not say explicitly updates announcements for these products are not on the way unlike some other rumors suggested.

In terms of Apple’s overall performance, KGI predicts sales of 54.2 million iPhones, 8.8 million iPads, 5.4 million Macs and 3.9 million Apple Watches for the fiscal quarter to be announced on Tuesday. Year-on-year iPad sales are once again down about 30% according to this report. Kuo says China was a key area of growth for the iPhone number.