Apple’s iPad continues to lead the tablet market, according to new data from IDC, but its marketshare has dropped a few points year-over-year, and the overall market for tablets saw negative growth, based on units shipped globally. That’s according to second quarter 2015 unit shipments and marketshare over the same quarter a year ago, as Apple shipped 10.9 million units versus 13.3 million units during the second quarter of 2014. While the iPad continues to lead in the tablet space, IDC’s data shows Apple’s market share dropping nearly 3 points from 27.7% to 24.5% … Samsung, the number two player in the tablet space, similarly saw declines in both units shipped and market share from Q2 2014 to Q2 2015. The Korean company slipped by a million tablets during the quarter year-over-year, falling from 8.6 million units to 7.6 million units, while its market share dropped a point from 18% to 17%.

As IDC includes both “slate tablets plus 2-in-1 tablets” in its data, the report shows Lenovo, Huawei, and LG as seeing measurable gains in both units shipped and market share. For Lenovo, the growth is slim year-over-year despite the overall market shrinking, as it shipped 2.5 million units in the quarter versus 2.4 million units during the same quarter a year ago. Lenovo’s market share climbed from 4.9% to 5.7%. 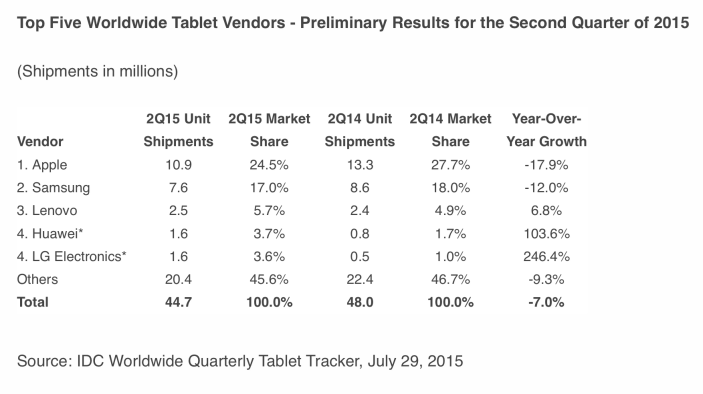 Huawei and LG both tied for fourth place, each shipping 1.6 million units with 3.7% and 3.6% market share, respectively. For Huawei, that’s up from 0.8 million units shipped a year ago and 1.7% market share leading to 103.6% growth in a market that’s down 7%. Similarly, LG increased its unit shipments from half a million to 1.1 million more year-over-year, with market share growing from just 1% to 3.6% causing 246.4% growth.

Aside from Apple’s and Samsung’s negative growth, the collective “Others” category also saw declines with 2 million fewer tablets shipped and -9.3% growth.

For Apple, a more significant upgrade to the 7.9-inch iPad mini is expected later this year as a potentially new iPad Pro with a 12.9-inch display is introduced to the category.