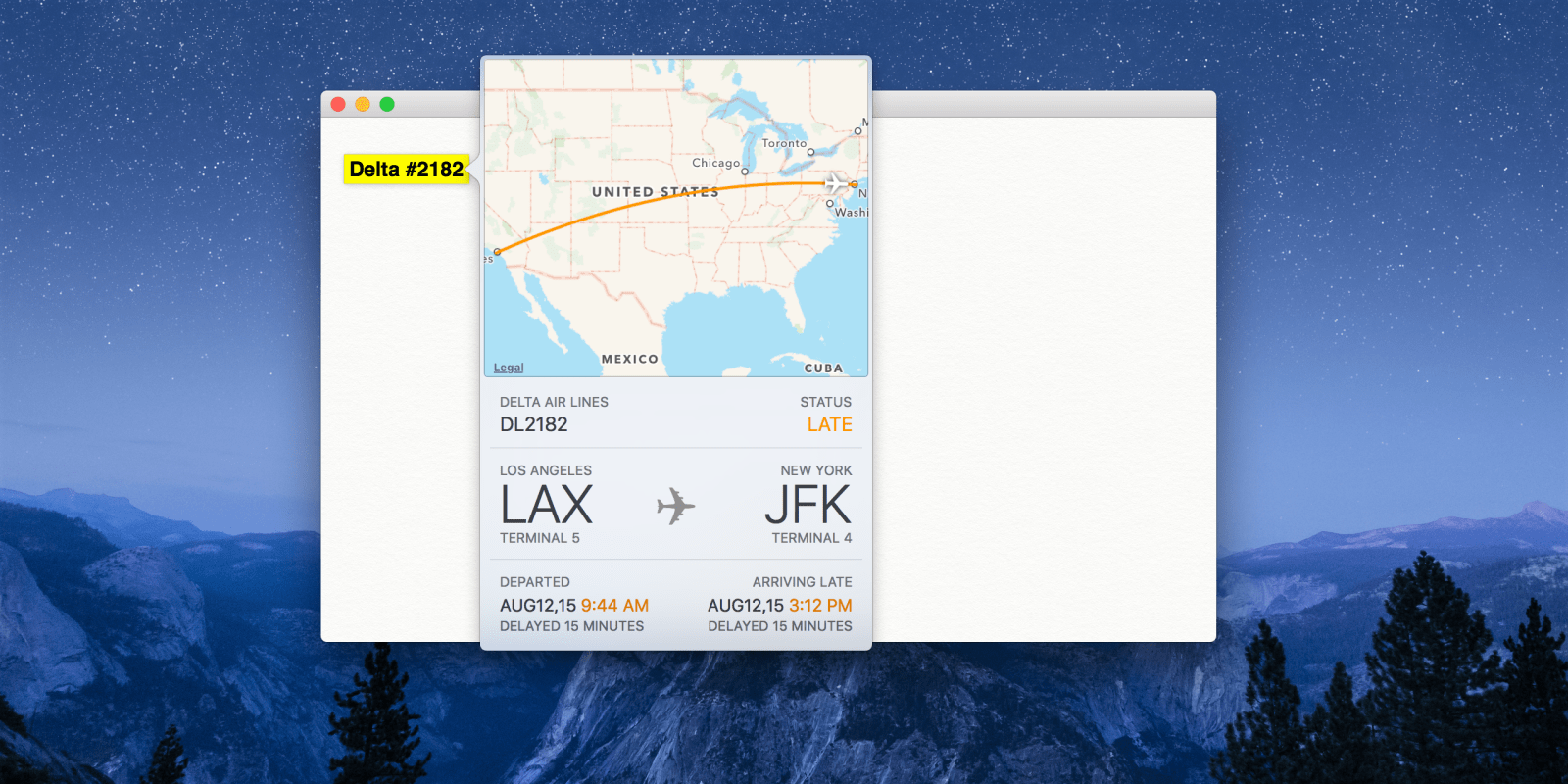 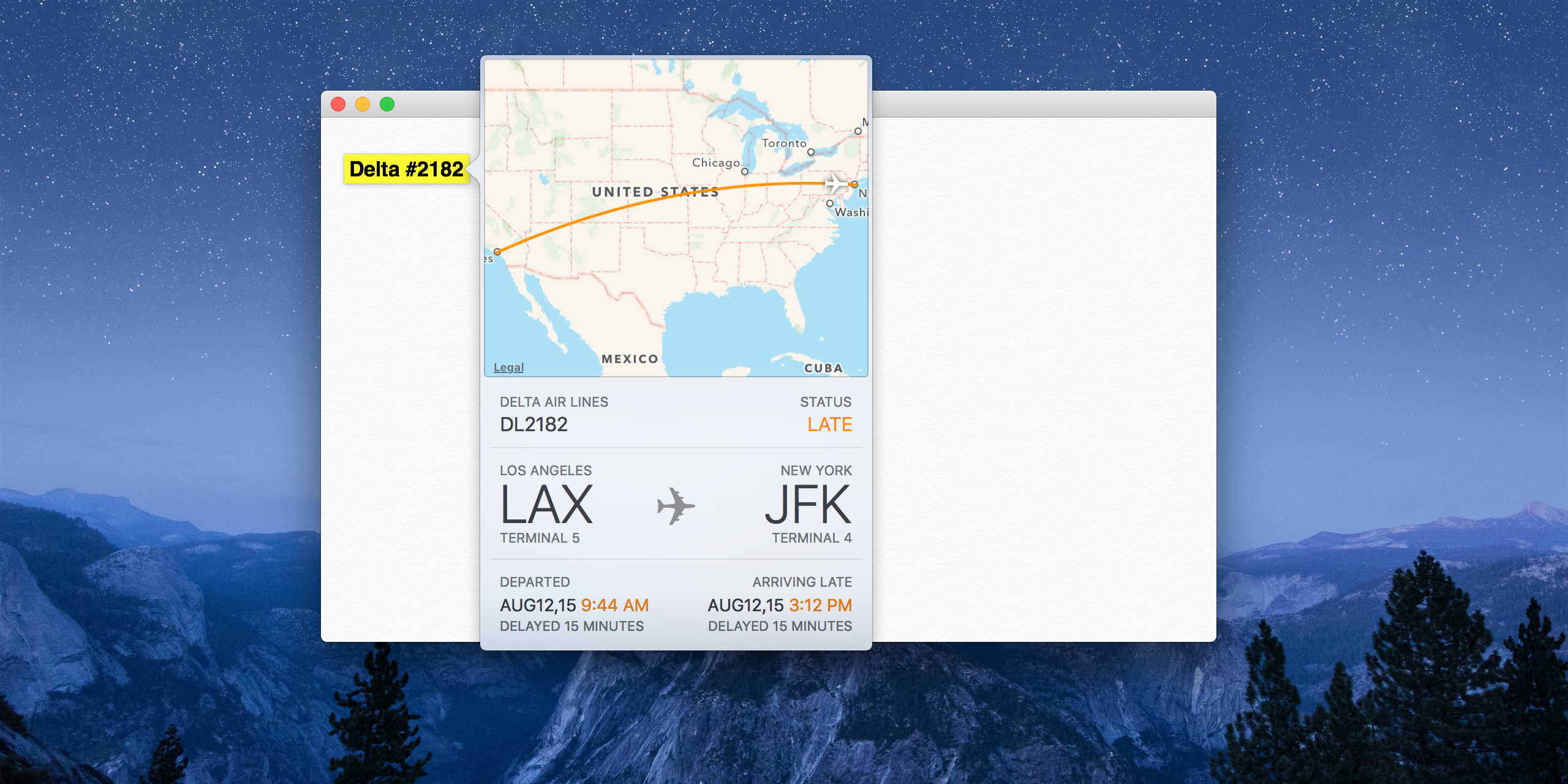 Flight tracking apps have been popular on iOS for as long as the platform had the App Store, and this fall Apple is baking a key function of those apps right into the operating system. A little known feature called ‘flights data detector’ is included in both iOS 9 and OS X El Capitan but was not highlighted on stage during Apple’s WWDC keynote. As one Reddit user highlighted, the feature lets iOS automatically detect when text is referencing a flight and allows users to actually check on the flight’s status and progress with an attractive interface. Here’s how it works on iPhone, iPad, iPod touch, and Mac… To start, type both the airline and flight number including the number sign into a text field (example: US Airways #654). I used a blank text field in the new Notes app for my example. After typing each airline and flight number, iOS 9 automatically recognized the data format as an existing flight and created an actionable link out of the text. The same method works across the system, including iMessages, text messages from Messages, and email in Mail. The same functionality should also be available from emails containing itineraries from airlines. Long pressing a single finger over one of these actionable links created from airline and flight number text on iOS 9 brings up options to either Preview Flight or Copy the text. This works in either landscape or portrait mode across the system. Tapping Preview Flight will prompt the system to present the flight previewing and tracking feature. On OS X El Capitan, the Preview Flight feature is activated by Force Touching rather than long pressing, or hovering the mouse cursor over the text entry and selecting the drop down menu next to the dashed outline around the text. In some apps like Messages, the links are clickable and do not require long pressing or Force Touching. 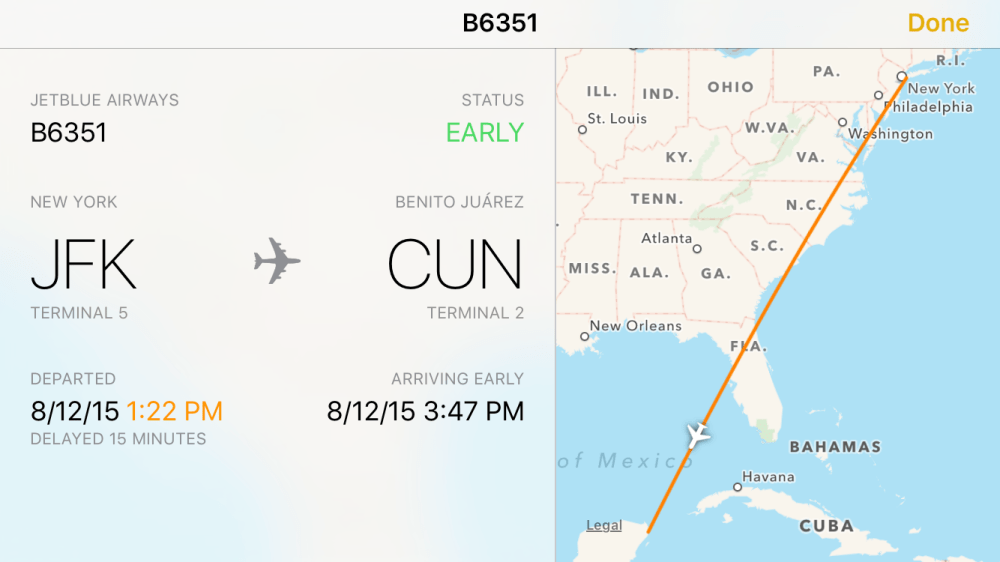 Once activated, iOS 9 and El Capitan’s new flight data detector feature presents a few key items about the relevant flight in focus. As you can see, the flight preview screen displays important data including the specific flight’s airline, flight number, and even flight status including ‘on time’, ‘early’, and ‘landed’. The view also providers the city of the airport as well as its official abbreviation, such as JFK or SAN. Matched with this is the flight’s departure or arrival terminal. Finally, the flight preview status shows when the flight actually departed down to the minute, as well as when it’s expected to arrive. If a flight was delayed, the preview displays this information as well. Above all of this is a mapped view of the flight’s path and how far along the journey it is.

The new flight status lookup feature matches Apple’s focus on Proactive search across iOS and both platforms’ new transit maps support. The flights data detector feature may not be as fully featured as ones found in popular apps such as FlightBoard for iOS, but it will likely be popular with frequent travelers when iOS 9 and OS X El Capitan are released this fall.