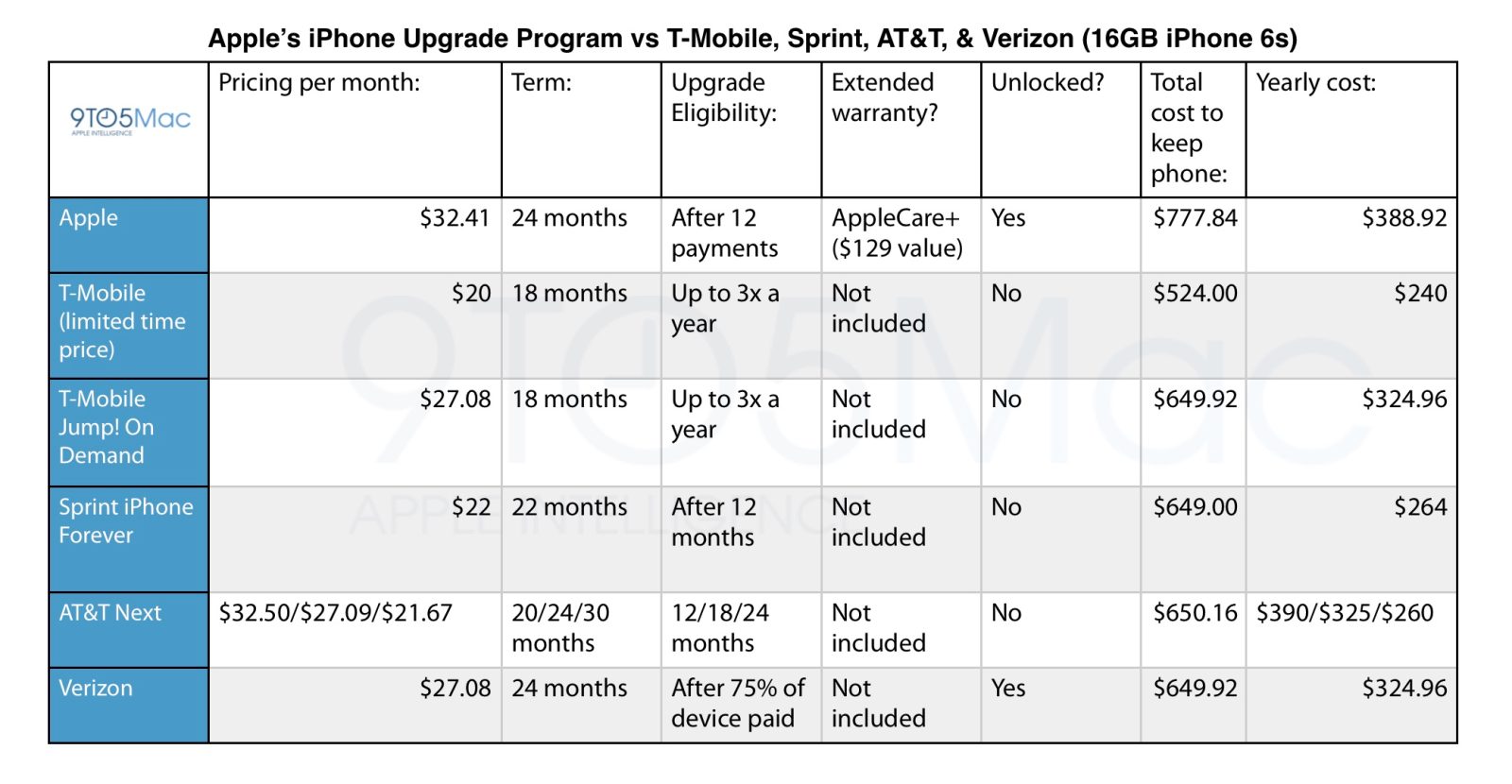 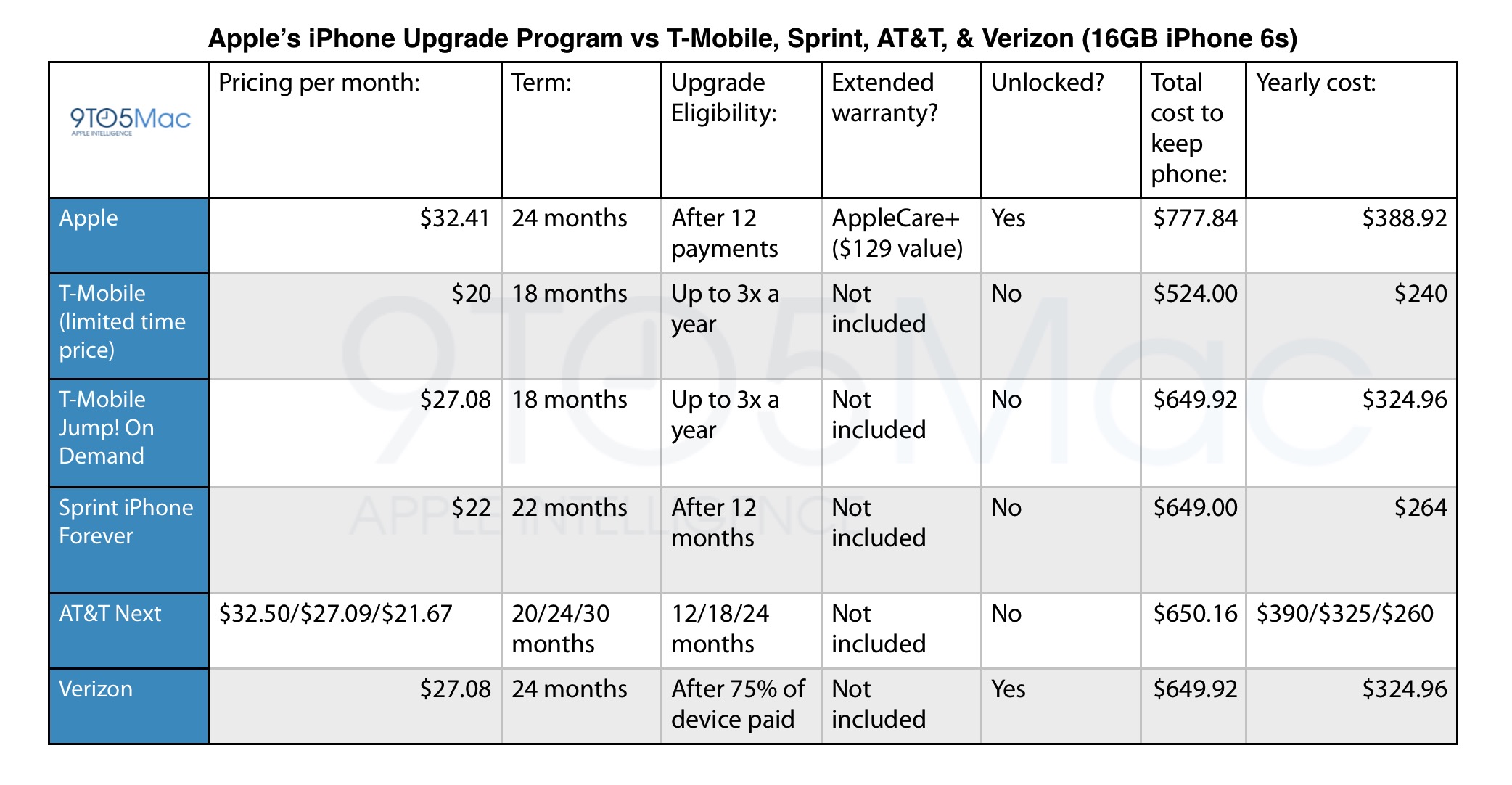 Update: The chart above was updated to reflect Sprint’s just announced iPhone Forever upgrade plan pricing. Sprint is offering $22/month regular pricing ($15 for those that trade-in a device) through its iPhone Forever Upgrade program. Customers can upgrade every time there is a new iPhone, but they’ll have to pay off the remainder of the retail price to keep it. Yearly cost for all plans added.

With the launch of its new iPhone 6s lineup this week, Apple is competing directly with its carrier partners by introducing an iPhone Upgrade Program that aims to rival similar offers from T-Mobile, AT&T, Sprint, and others. Customers pay monthly instalments for 24 months, and they can optionally trade-in or pay off the device after 12 months to upgrade to a newer model. Apple’s own upgrade program offers some perks for consumers— the ability to get an unlocked device and use the carrier of their choice, for example— but how does it compare to the upgrade/financing programs from the other guys?

Below we compare the upgrade programs of the various carriers for an entry-level 16GB iPhone 6s and also take into account limited time promotions and other perks to find out who offers the best overall value.

Things to keep in mind: These are advertised prices before taxes, and T-Mobile’s best prices are introductory and only for a limited time. The installment prices from the other carriers are based on prices for installments on $649 iPhone 6. Since the new iPhone 6s models take over last year’s iPhone 6 pricing, it’s likely that will reflect installment prices for Jump On Demand and the other carriers after any introductory promotions have ended. We’ve confirmed as much for AT&T.

Most plans allow you to upgrade to a new device after a 12 or 18 month term (or equivalent number of payments), or optionally purchase the device outright for the remainder of the retail cost of the device.

All offer $0 down when signing up for a leasing/upgrade plan, and some carriers make you pay tax on the entire 12-30 month term up front.

T-Mobile’s introductory pricing comes in at the best overall value at $524. That leaves you with enough left over to buy a $129 AppleCare+ warranty and still come in at $650, the same price most of the other carriers are selling the device for without the extended warranty. That’s also over $100 cheaper than the total cost of the upgrade program through Apple with included AppleCare+. But once T-Mobile inevitably ends its introductory pricing, the majority of the carriers and Apple come in at almost the exact same price. And if you want to keep your iPhone 6s and leave T-Mobile, you’ll still have to pay the reminder of the $649 retail price on the device.

One benefit of going with Apple is that you’ll be able to bundle AppleCare+ with your iPhone lease for just a few dollars more per month and therefore won’t have to pay the $129 cost up front. Going with Apple also has the added benefit of being able to pick the carrier of your choice, and AT&T offers a choice between the length of the term from 20-30 months for those that might prefer a lower monthly rate. But overall, unless other carriers respond with discounted introductory pricing under the $649 price Apple announced, it looks like T-Mobile has the best on overall value for now.

Preorders for the device will officially kick off on Saturday, September 12 through Apple and most major carriers and retailers.