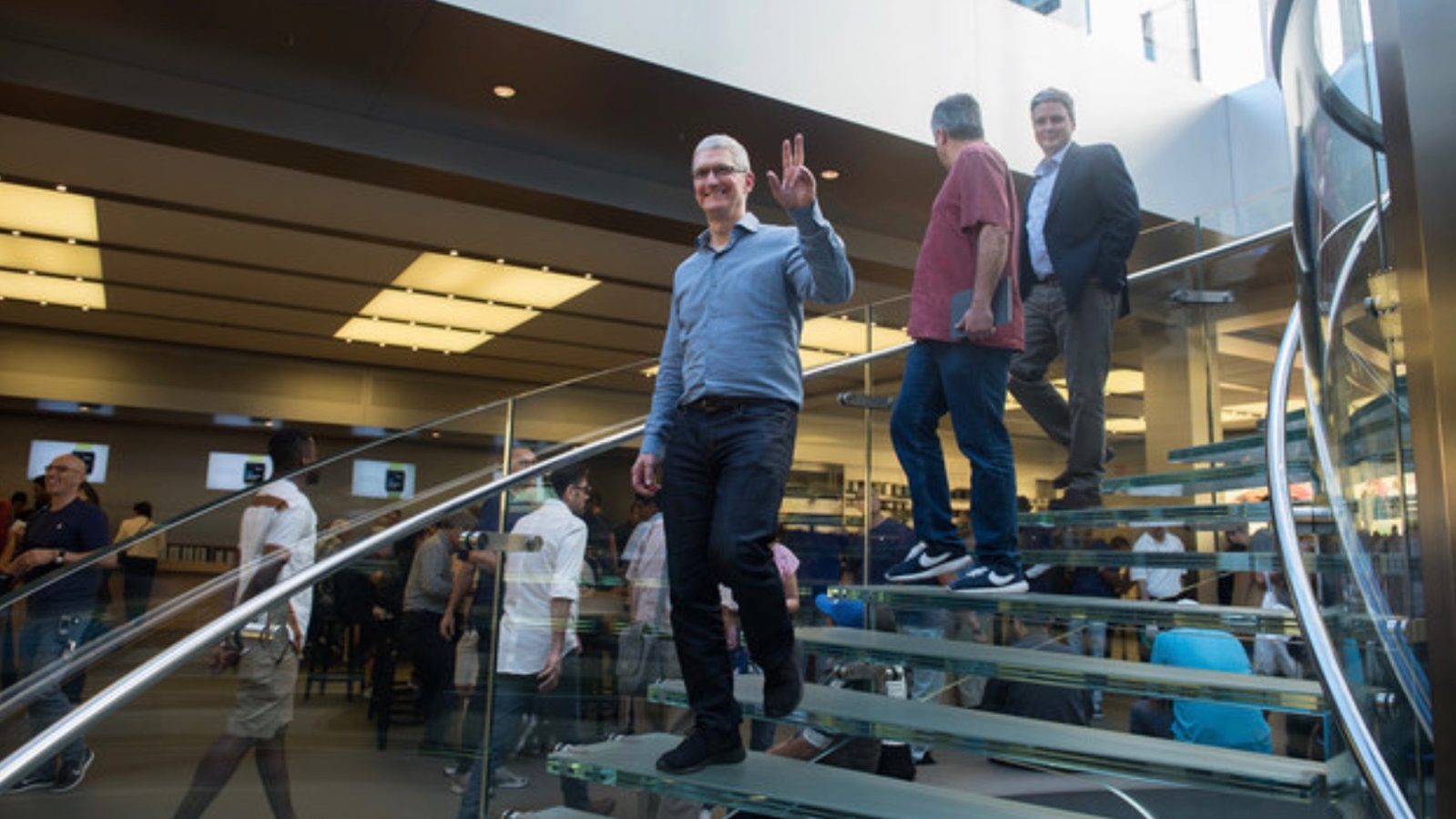 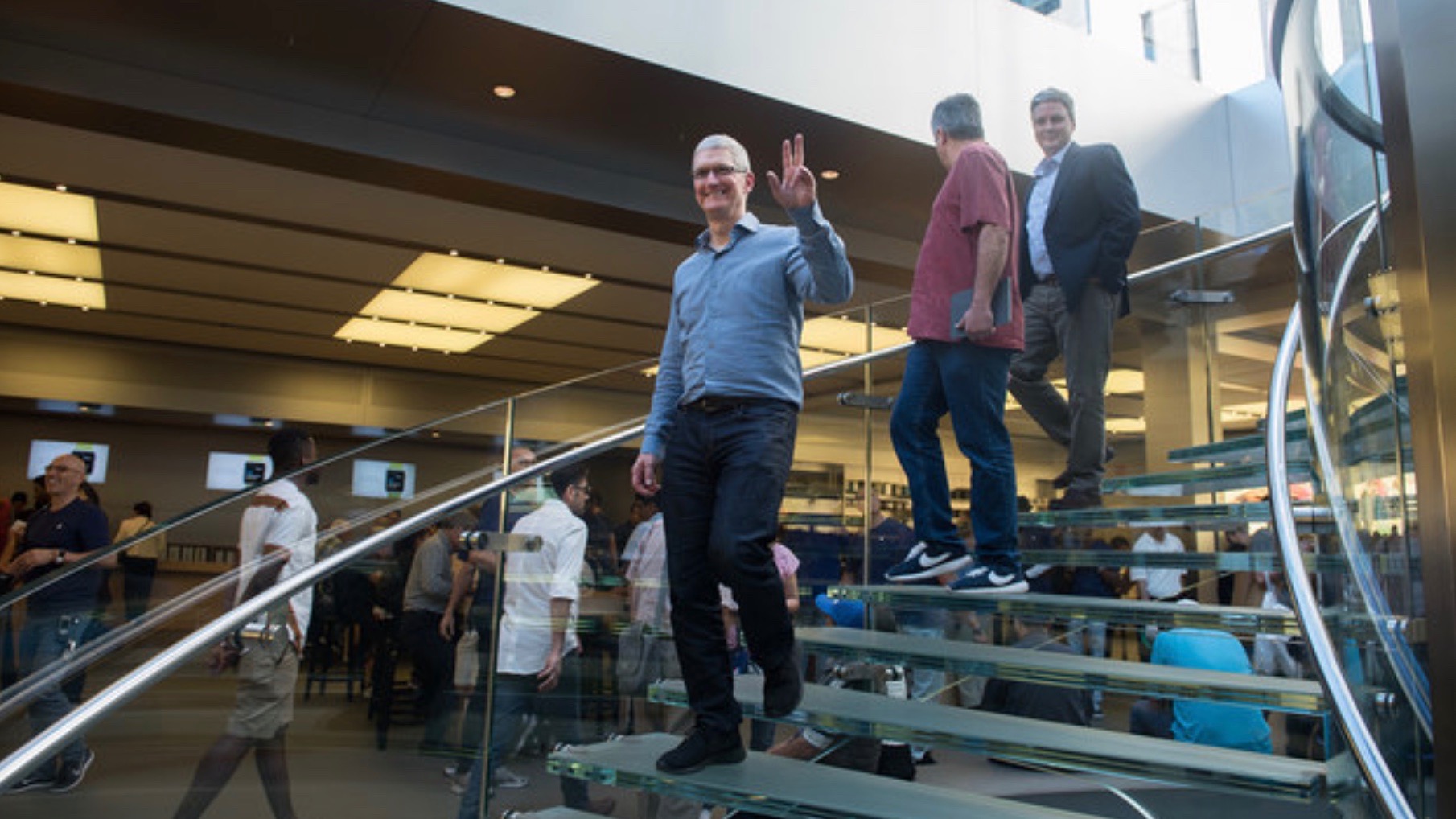 After announcing new iPhones and iPads plus an updated Apple TV in San Francisco last week, Tim Cook is taking a slight victory lap in New York City with a media blitz that leads to an interview with Stephen Colbert tonight on CBS’s The Late Show. Before a surprise visit yesterday at NYC’s iconic Fifth Ave store with Eddy Cue, the Apple CEO gave a quick interview with Buzzfeed. In it he told John Paczkowski that his Apple Store visit really is a surprise to everyone.

“I almost always go in unannounced,” he says. “It’s rare that I tell anyone that I’m going. But I do try to go to stores every time I’m traveling to a new city. It’s important.”

Cook also discussed the privacy implications of an always-listening Siri, what he likes best about the iPhone 6s, and even the possibility of being able to delete system apps in the future…

On the subject of privacy and activating the voice assistant with the “Hey Siri” command, Cook highlighted the opt-in nature of the feature and emphasized that information stays on the device and is encrypted.

“Apple doesn’t have access to it. So there’s not privacy concerns I think, for most people, when the information is held on their device and they can encrypt it with their passcode.”

Starting with the upcoming iPhone 6s and iPhone 6s Plus, which customers can pre-order now and pick up or have delivered on September 25th, the “Hey Siri” command becomes an always-on feature rather than requiring the device to be connected to power to work. As the device listens for the specific command, though, it remains an opt-in feature than can be turned off in Settings.

Cook also defended the iPhone 6s, which looks nearly the same but offers a stronger casing, improved camera, and 3D Touch display, as not being just an incremental upgrade.

“This is clearly not an off year issue, he argues, “this is a substantial change.”

Cook also talked up the new iPhone’s Live Photos feature, which creates a mix of a photo and video with sound and camera quality, as being something brand new, although HTC and Samsung have shipped versions of the feature already.

“I think Live Photos is a medium that hasn’t existed before. It’s like discovering a new form.”

Calling 3D Touch, one of the standout features of the new iPhones, a game changer, Cook said it boosts productivity in apps like Mail:

“I find that my efficiency is way up with 3D touch, because I can go through so many emails so quickly. It really does cut out a number of navigational steps to get where you’re going.”

Cook also described Apple’s new upgrade program as an answer to people who want to easily upgrade to new iPhones each year.

“The upgrade plan is really just about recognizing that the process of buying an iPhone could be simpler and that there’s a group of people that would like to upgrade every year,” he says. “This makes that easier, and I think people will appreciate that.”

On the subject of the iPad Pro, Cook describes Apple’s tablet as already fulfilling the needs of some computer users. This is especially interesting as the iPad was first introduced as a device between an iPhone and a Mac.

“I think that some people will never buy a computer,” Cook says. “Because I think now we’re at the point where the iPad does what some people want to do with their PCs.”

Cook goes on to explain that the Mac is still a long term product even with the iPad Pro attempting to duplicate capabilities, adding that some people will still continue to buy computers.

Perhaps most interesting is an answer to a question not exactly about Apple’s new products but one that users have been asking for years. When will Apple let you delete those pre-installed system apps that Apple keeps adding?

“This is a more complex issue than it first appears,” he says. “There are some apps that are linked to something else on the iPhone. If they were to be removed they might cause issues elsewhere on the phone. There are other apps that aren’t like that.

Cook goes on to admit that not every pre-installed app is totally necessary (Podcasts, iBooks, Find My Friends, and Find My iPhone only recently moved from the App Store to being bundled in) so Apple is considering making non-essential apps optional.

So over time, I think with the ones that aren’t like that, we’ll figure out a way [for you to remove them]. … It’s not that we want to suck up your real estate, we’re not motivated to do that. We want you to be happy. So I recognize that some people want to do this, and it’s something we’re looking at.”

You can check out the full interview at Buzzfeed and tune in tonight at 11:35 PM ET to catch Cook’s appearance on The Late Show.