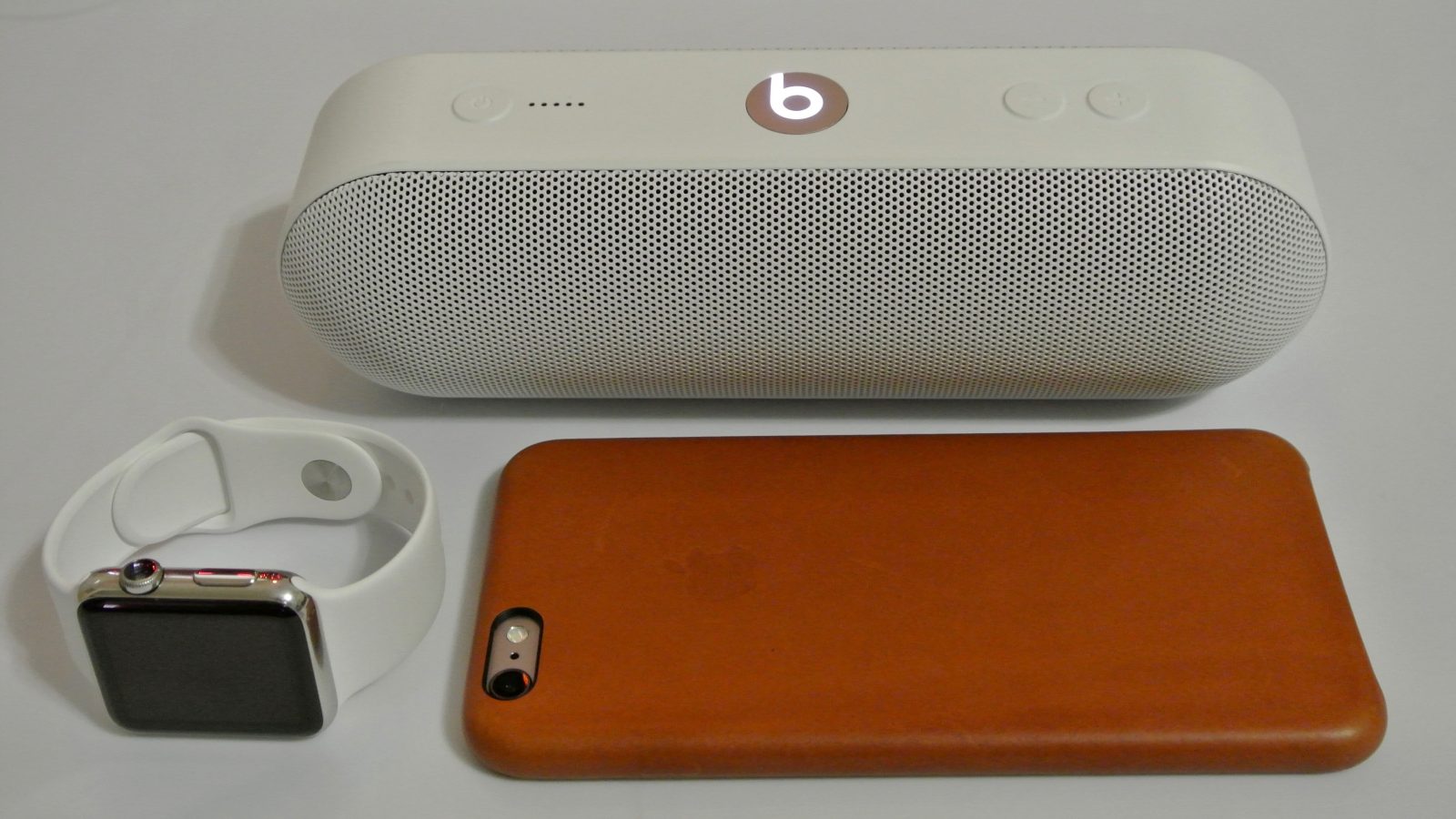 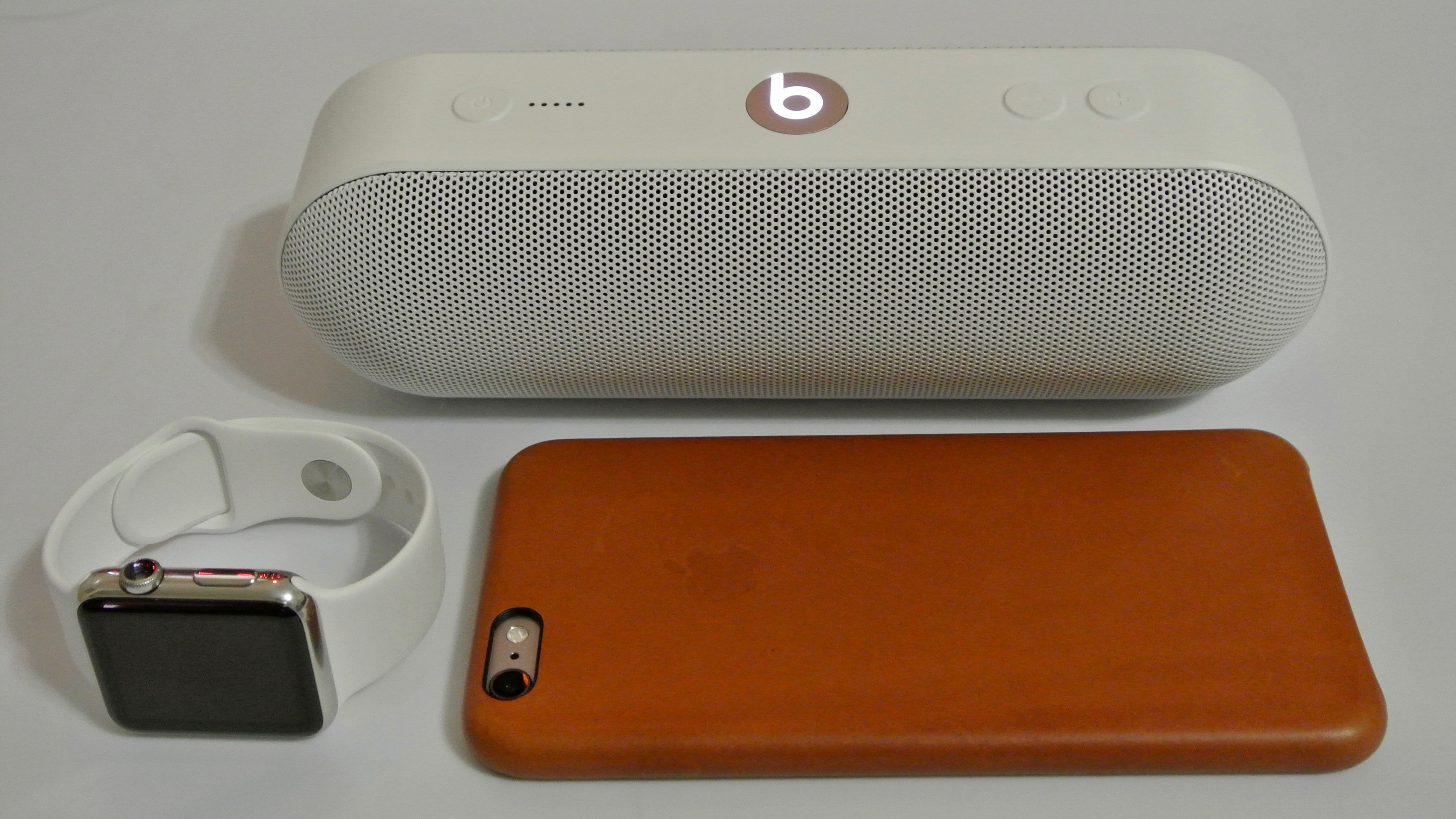 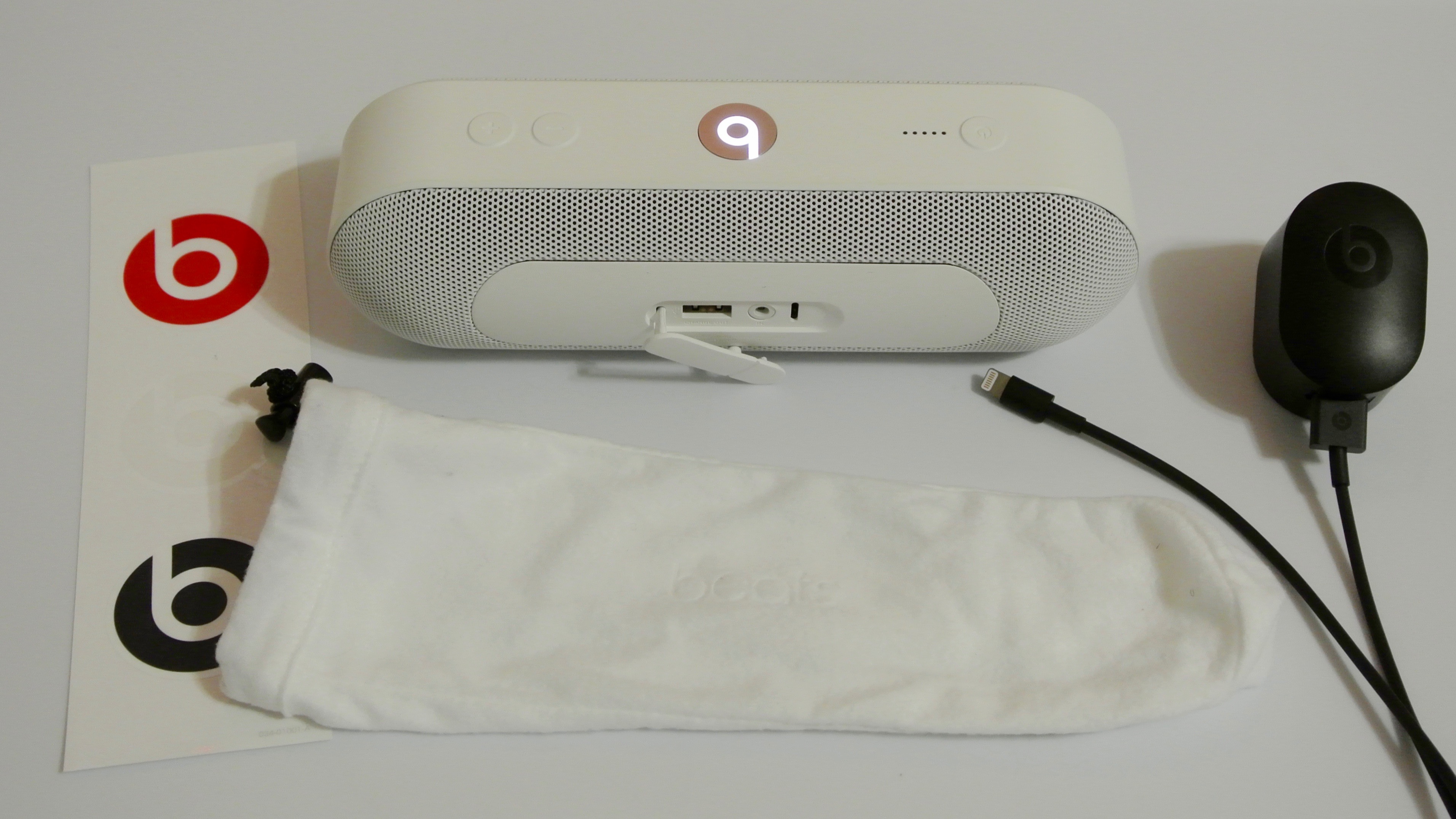 The design has changed from an upward-facing capsule one to a forward-facing body that’s more symmetrical but still clearly pill-shaped. The shape change from Benadryl to Tylenol means those Beats Dude Stands won’t work anymore, and that’s probably okay.

The top of Pill+ features an illuminating Beats logo’d button that lets you play and pause tracks. Hold it down to add a second connected device without disconnecting from the first device. Dedicated volume up and volume down toggles are placed on the top right, while a power button/battery status plus LED indicator light are placed on the left.

Out of the back under a flap you’ll find a traditional USB port for the Pill+ charge out feature to power iPhones and iPads, a line-in port for wired playback over a stereo cable, and a standard Lightning port for recharging the built-in battery.

Also included in the packaging, which resembles that of the Apple Watch Sport and feels very much like Apple’s, you’ll find a color matched cloth carrying case and three colored Beats logo stickers. The cloth bag is big enough to carry Pill+ and the included black 12.5W power supply and black Beats-branded 1.5m Lightning cable. 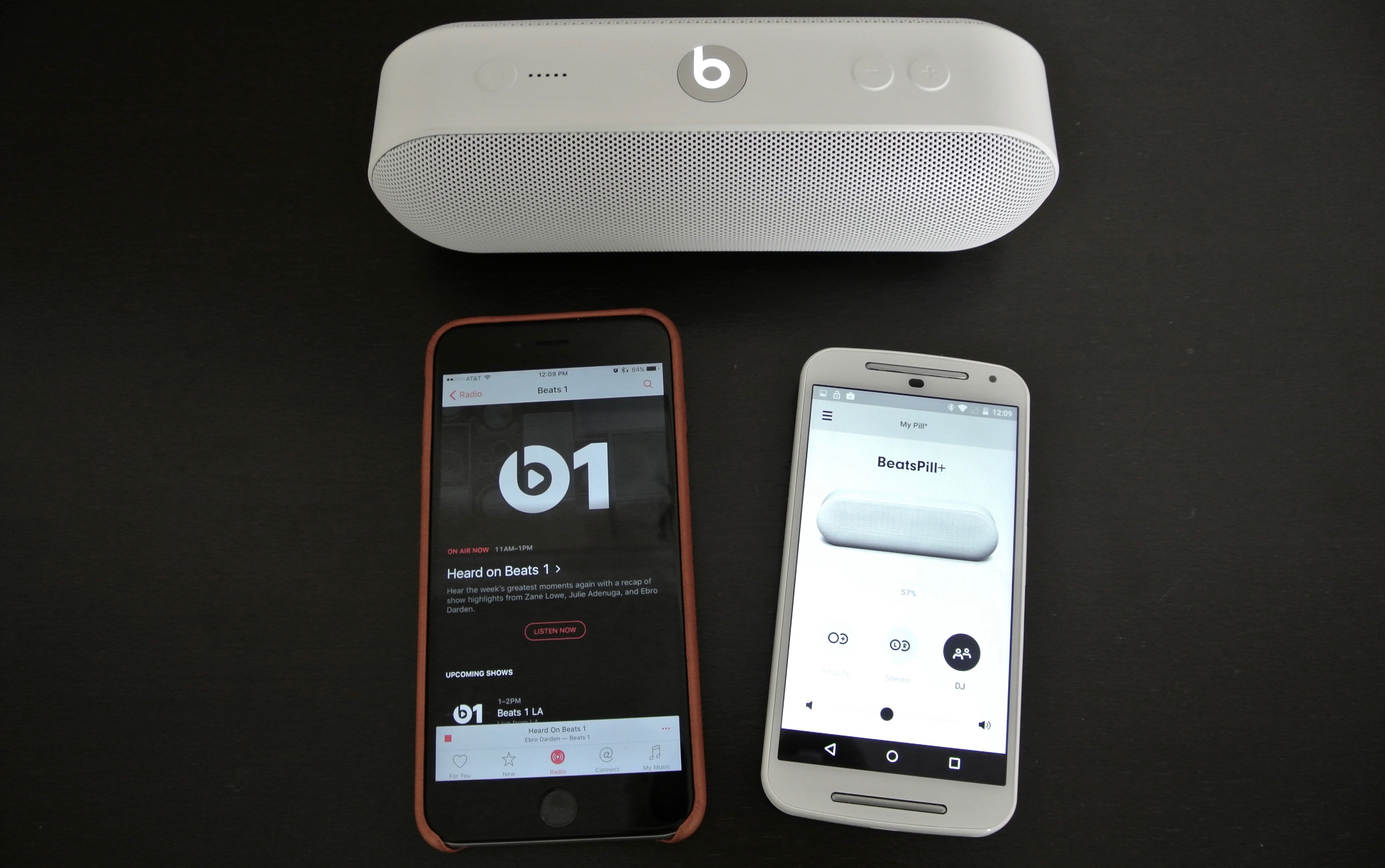 Unlike Apple’s new Magic Keyboard, Mouse 2, and Trackpad 2 for Mac, there’s no magical instant pairing process between iPhones and Pill+. Open Settings, look for Pill+ under Bluetooth, and connect to it like similar Bluetooth speakers. There’s no Wi-Fi or NFC radios that enable AirPlay connectivity or instant pairing here; the Apple hardware influence aside from design is limited to the Lightning port.

There’s also the companion Beats Pill+ app for iPhones and Android phones, but curiously not iPads. The app does fully function on iPads, just scaled up especially large on iPad Pros which still benefit from dedicated portable speakers. So what exactly does the app do?

Beats Pill+ for iPhone and Android has three main functions: DJ, Stereo, and Amplify. The first feature will likely be the most popular as the next two require having a second Pill+ around. Install the app on one of two connected phones, then enter DJ mode to let Pill+ change between which paired phone is actively playing music. UE recently added a similar ‘Block Party’ feature to their speaker, so this seems to be the thing to do with Bluetooth speakers with apps although I’m not sure how useful it is in practice.

The other two features require a second Pill+ and let you pair them together. Stereo creates left and right channels for playback while Amplify boosts the sound on both speakers together. Pretty cool if you and a friend both have the Pill+ speaker, but I wouldn’t recommend spending $460 to try it out on your own.

The companion app also has a few unadvertised features. You can register the Pill+ to your email address for warranty information, check (and presumably update) the firmware version and serial number of the Pill+, disable the cue sounds that Pill+ makes when powered on and off, and check the battery level of the speaker.

Curiously, the iOS version shows battery level both in the app and with the Notification Center widget in increments of 10, while the Android Pill+ app shows the exact level. Unlike with Apple Music where each app has a dedicated design, the Pill+ app is nearly identical on both platforms. 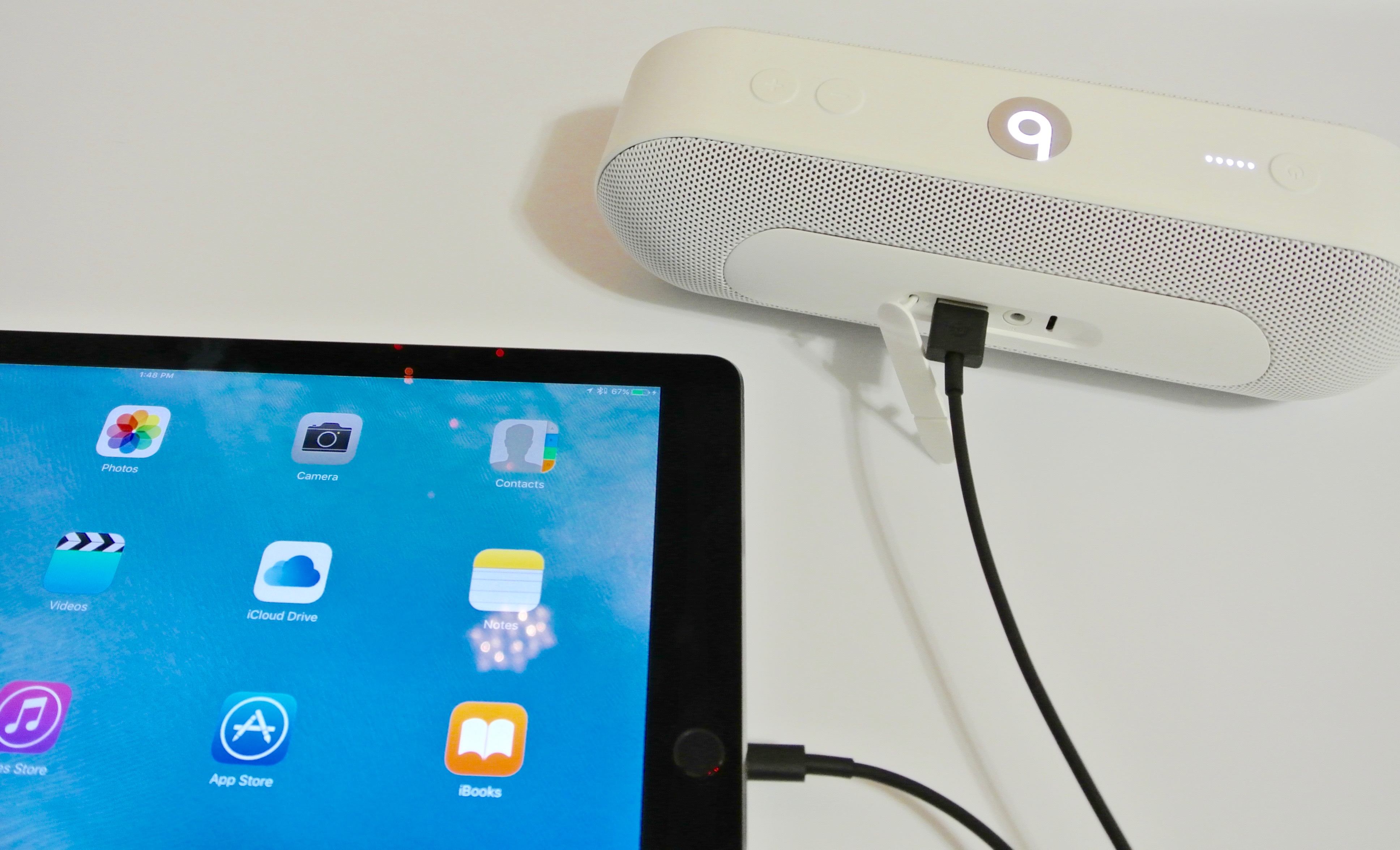 Battery life on Pill+ is easy to live with and delivers around the promised 12 hours of continuous playback on a single 3 hour charge using the included 12.5W power supply. Pill+ also features the popular charge out feature found on many Bluetooth speakers which lets you connect any USB cable to refuel iPhones, Android phones, and even iPads including the Pro as a backup portable power source. The included Lightning port will not recharge the Apple Pencil, however, although it does fit.

You can check Pill+ battery life by pressing its power button to activate the 5 LED indicator or through a paired device. iPhones and iPads can use iOS 9’s new battery widget to check battery life in Notification Center; this also works with other Apple and Beats products like Pencil, Watch, and wireless headphones. Android phones can get a more specific battery level using the companion for whatever reason as mentioned before.

Everything else aside, Beats Pill+ is a solid portable speaker and a better product than the Beats Pill 2.0 that it replaces. Pill+ is louder, fuller, and has a few more bells and whistles than the Pill 2.0, but I wouldn’t rush out to upgrade from one to the other unless the new design and Lightning connection really appeal to you. The charging port will obviously appeal more to iPhone owners than Android owners which likely have the same connector as the Pill 2.0 with micro-USB.

While volume is no issue for Pill+, I was especially surprised by the (wait for it) lack of bass (yes, I know, unheard of for Beats). Pill XL was priced $70 higher but had a much larger body; Pill 2.0 was $30 less and similarly sized. Sound-wise, Pill+ is an upgraded Pill 2.0 and not at all a replacement for the recalled Pill XL.

Pill+ doesn’t strike out though. Place Pill+ along a wall and the bass is amplified naturally by the output coming from the rear side for a much better sound. Treble tones are sharp, mids are clear, and deep sounds are distinctive for a speaker its size. It’s also super portable even though it’s a bump up in size from Pill 2.0, but you can find more impressive sounds from similarly or lesser priced Bluetooth speakers.

Pill+ is much easier to recommend at sales prices between $150-$200 than at $230. Apple’s $60 iTunes gift card bundle for the next few weeks effectively brings the price to $170 when you factor the credit, but Amazon’s $195 deal is the best 9to5Toys has spotted yet. 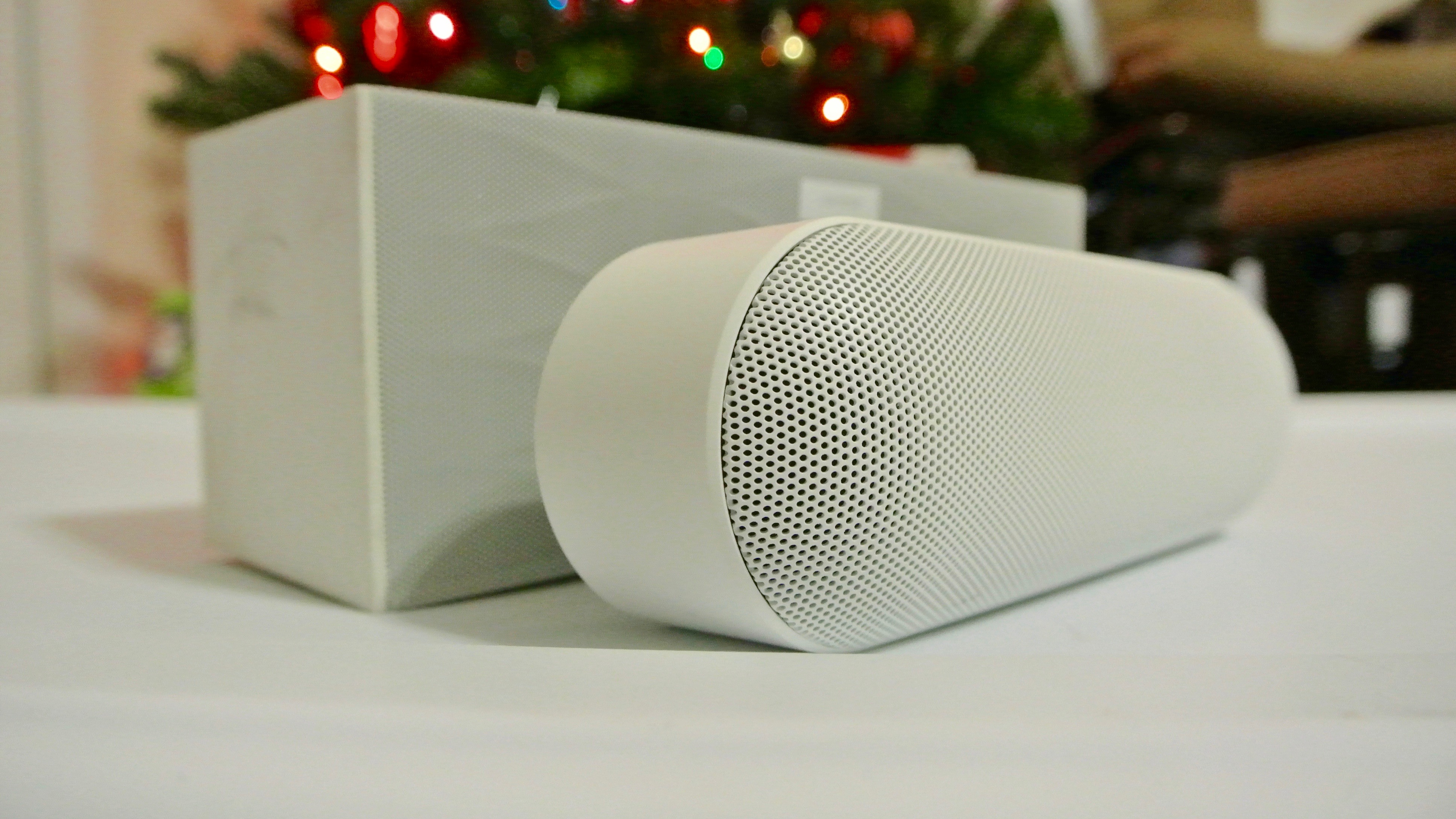 If you like the Apple-inspired white aesthetic but want upgraded sound, Jawbone’s Big Jambox ($209, reg. $299) is an easy recommendation. Both do speakerphone with built-in mics and have Bluetooth range that exceeds the promised 30-60 feet, while Big Jambox is only a step up in size with a noticeable step up in sound. There’s also 3 more hours of battery life, but you trade Lightning for micro-USB and drop the charge out feature.

You can also find Pill 2.0 new from $179 and open-box from $129 if you’re targeting a Beats speaker without the higher price tag. You lose Lighting and the DJ feature through the app, but you can still pair two Pill 2’s for stereo or louder sound and more colors are offered.

On its own, Pill+ is a solid little speaker and Lightning makes charging it very convenient for iPhone and iPad owners. The look is also a fair balance between Apple and Beats, still edgy but a bit cleaner than past products from the lineup.

My own needs are quite limited but likely common: I just want something reliable that looks good and plays louder than my iPhone or iPad during showers and washing dishes. Pill+ does that for me albeit at a premium price.

I could take or leave the app features, some sort of AirPlay special connection to iPhones would be desired, and dropping NFC that instantly paired past models with Android phones is curious now that iPhones have the radios, but that all leaves room for a more ambitious sequel that could warrant an even higher asking price.

While you can get a better sound for a similar or even lower cost, the convenience of Lightning charging and the fresh look of the Beats Pill+ overall is very appealing to me, especially at lower street prices than Apple’s asking price.