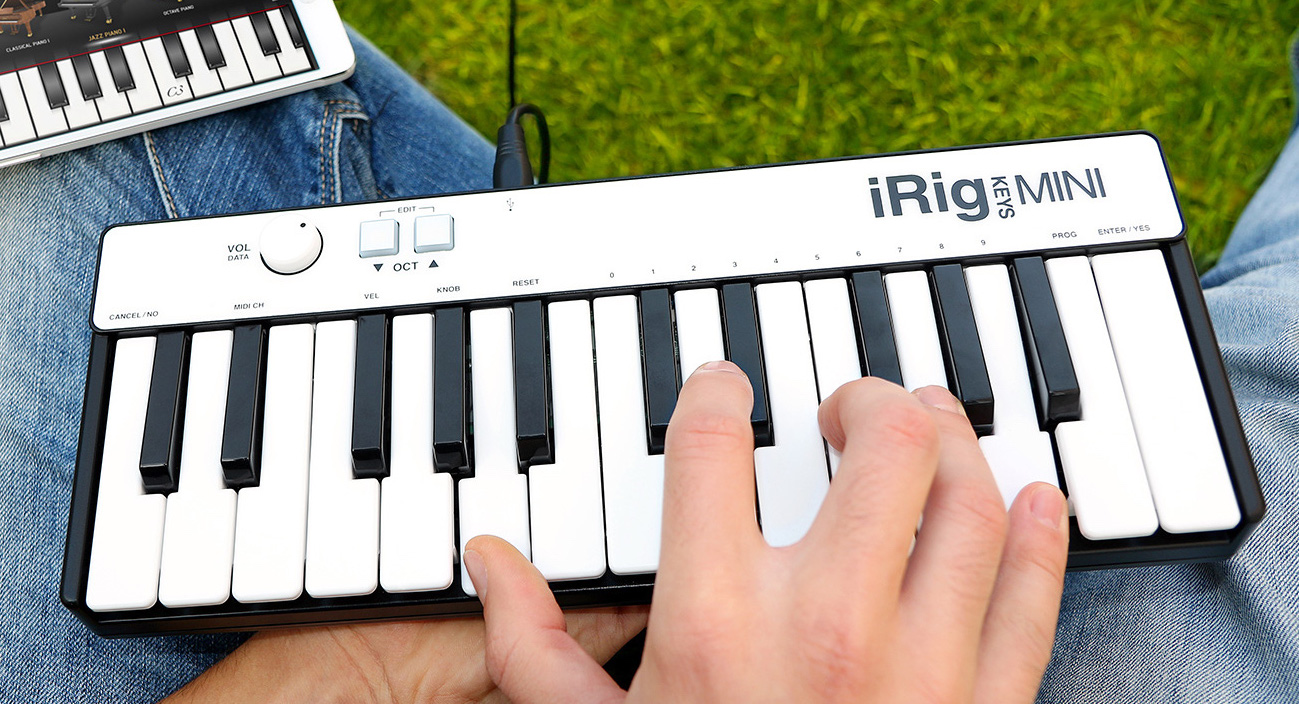 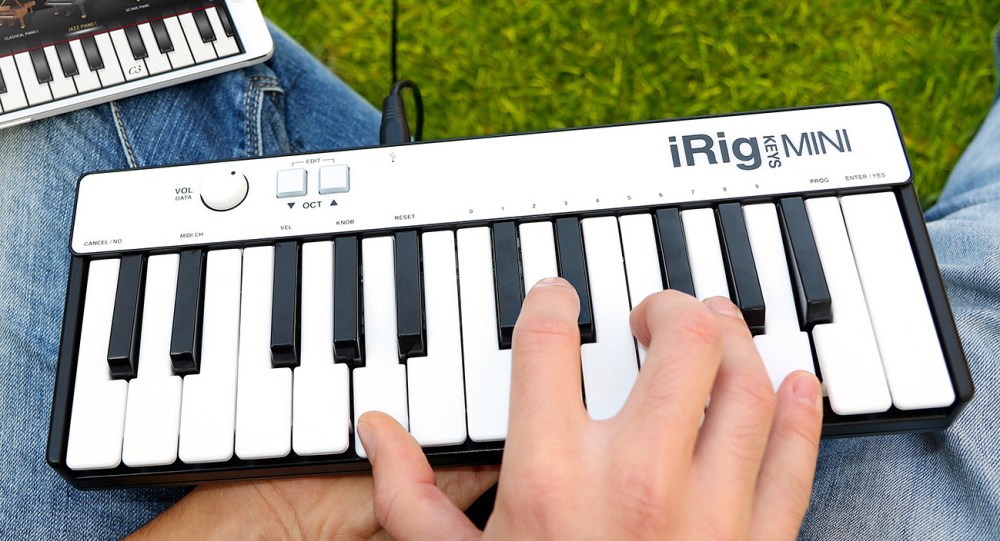 The iRig Keys Mini is an electronic MIDI music keyboard that connects to iPhone and iPad with a Lightning cable. Although it isn’t regularly advertised, iPhones and iPads have had great support for MIDI input instruments and other devices for a long time. Since iOS 4 in fact, Apple gave the developers the ability to interact with MIDI peripherals. Simultaneously, the App Store has bloomed a wide ecosystem of sophisticated music creation and audio production apps. This makes for a perfect storm of capability and functionality: not only are MIDI accessories possible, they can really be used to make music on iPhone and iPad.

Read on for my full review of the iRig Keys Mini piano keyboard for iOS ($79.99).

First off, it’s important to note that the iRig product is made to work with iPhone and iPad, it’s an official MFI accessory. Often, musicians connect MIDI devices to iPad by using a kind of hack — plugging in a USB MIDI device with the iPad USB Camera Connector. This works surprisingly well for a number of accessories but it isn’t official or as elegant as a true MFI MIDI keyboard.

The iRig is not an unofficial oddity. It has a MFI sticker on the packaging. Setting up the iRig with an iOS device is extremely simple — you just plug it in. The iRig itself is compatible with multiple computing accessories, so the I/O connector on the hardware is actually a mini-USB port. There’s a mini-USB to Lightning adapter bundled in the box, as well as a normal USB and mini-USB connector for using the iRig with a laptop.

For iPhone and iPad connectivity, it’s as simple as plug and play. There’s no setup at all once you put the cable in both ends. The iRig is powered by the source device, which is very convenient for people like me who don’t want to manage yet another accessory with a rechargeable battery. The octave buttons illuminate with a red glow to confirm the device is getting power.

Although this review is focused on using MIDI with iOS, I did briefly test Mac compatibility. Plugging in the keyboard with the USB adapter automatically brought up a ‘Device Installing’ notification on OS X. After a few seconds, the iRig keyboard was ready to use. 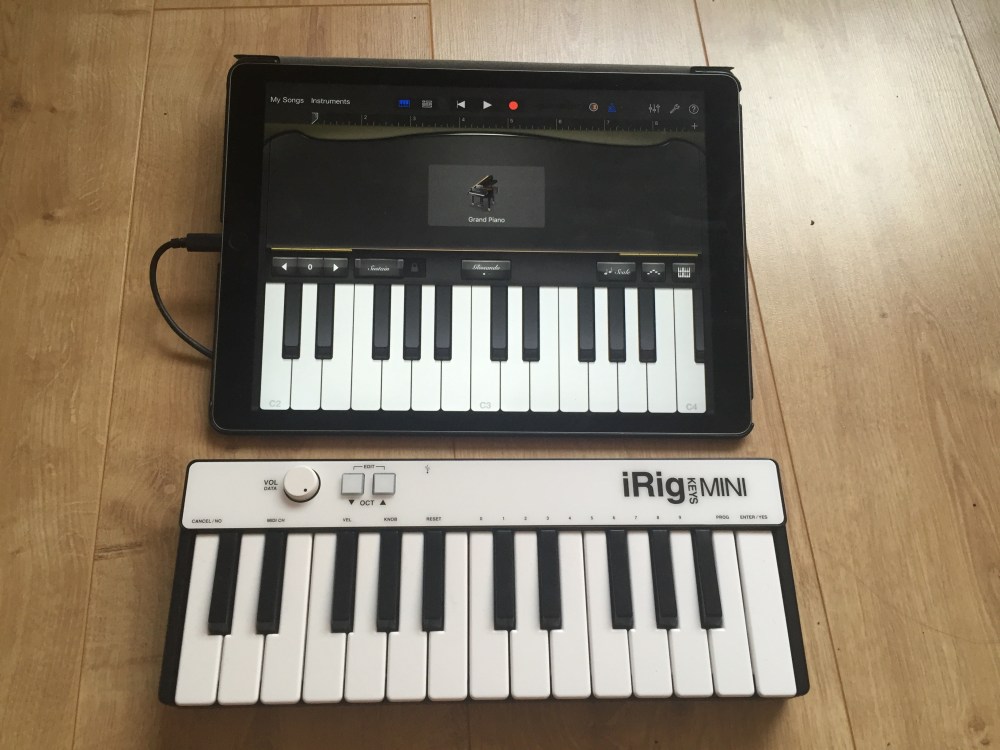 As a piece of hardware, the accessory is well-built. It’s made of plastic but feels sturdy; you can sling it into a bag without much worry. It’s almost identical in width to the iPad Pro, so symmetry of the size is nice to look at on a desk. The accessory houses 15 white and 10 black piano keys, obviously setup in their normal pairings. Above the row of keys is a header bar containing volume options, octave switches and the iRig logo. My biggest complaint with the way this thing looks is the size of logo: it dominates the fascia and screams too much. I would greatly prefer if iRig scaled the logo way smaller or, even better, removed it completely. The product would be very elegant with a pure white faceplate.

Standalone, just plugging the keyboard into an iOS device is useless of course. You can change octave and see the red indicator lights flash, that’s about it. (By the way, the keyboard will alert you when you are reaching the ends of the sound spectrum and should consider adjusting the current octave in use through the illumination.) Crucially, the keyboard makes no sound without the brains of an app powering it: you need MIDI-aware software to actually do something with it. 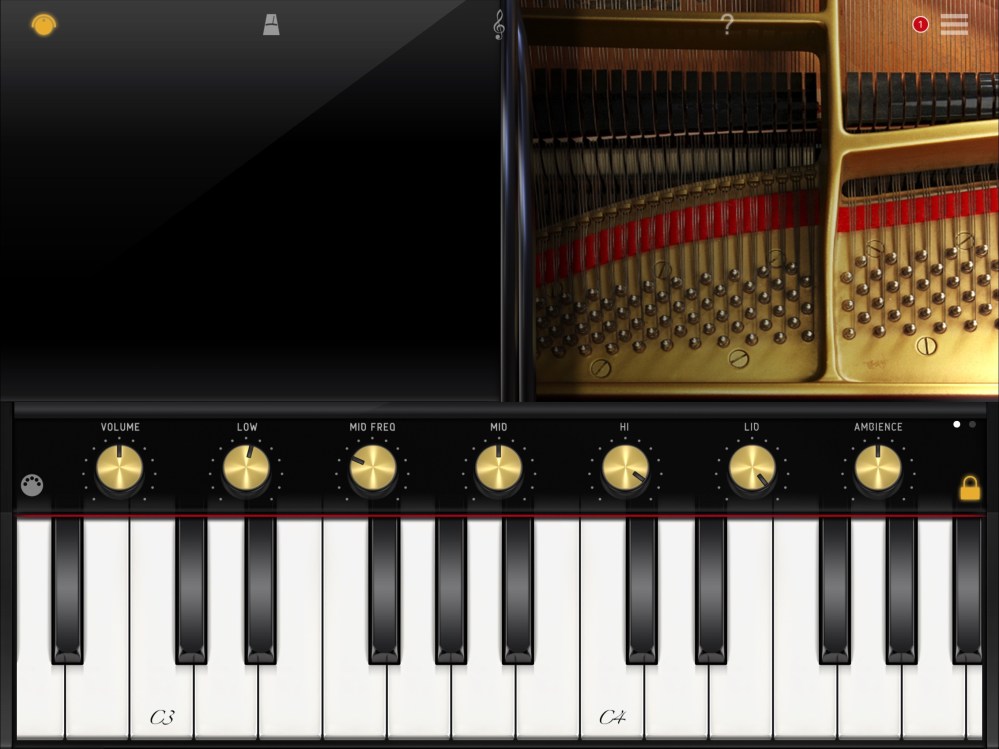 iRig has made its own apps to use with the keyboard; iGrandPiano and SampleTank. These can be used with the touchscreen only of course but come into their own in collaboration with the physical accessory. The Grand Piano really does sound like a piano, with high quality effects and reverb. I’m not a real musician but I have a lot of fun playing the piano through the iRig.

You can adjust octave and volume settings straight from the keyboard, so your hands don’t have to rejuggle between the iPad screen and the piano keys. The app also features a recorder and metronome to keep in time with the beat. After creating a masterpiece, the app can save out the file as an audio clip or MIDI file. This means you can import the raw MIDI notes into another app, perhaps on the Mac, for more serious editing or stitching into a larger composition. 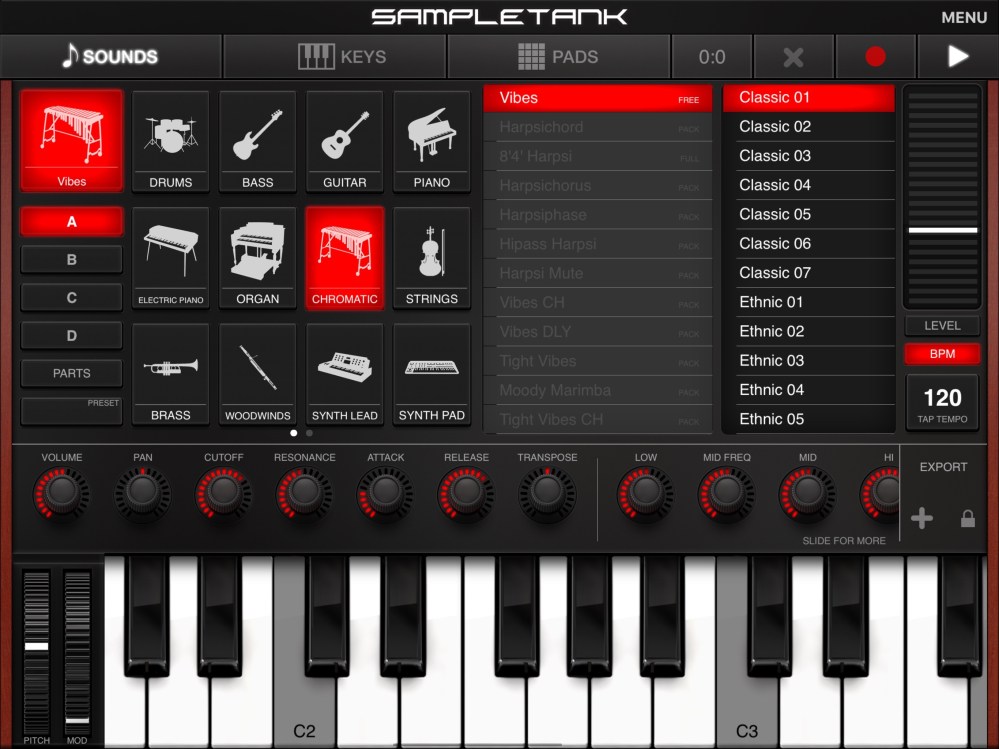 SampleTank uses a piano input interface to abstract over a myriad of different instruments from drum kits to organs to woodwind instruments. It also supports an autoplay feature, so you can let the app play a constant repeating rhythm whilst you jam out using the iRig. The volume and octave settings of the app are independent to the keyboard, enabling some simple compositions.

The recommended apps aren’t perfect and have some minor niggles throughout: adjusting the knobs in iGrandPiano is a frustrating affair. The real beauty of the iRig hardware, however, is that it isn’t limited to the apps IK Multimedia have created. You can use it with any MIDI app. There’s a lot on the App Store but arguably the best comes for free from Apple: GarageBand. The iRig works flawlessly with Apple’s music app. As well as interoperating with the keyboards, you can play the drums, sample and strings, as well as control the plethora of smart instruments GarageBand includes. 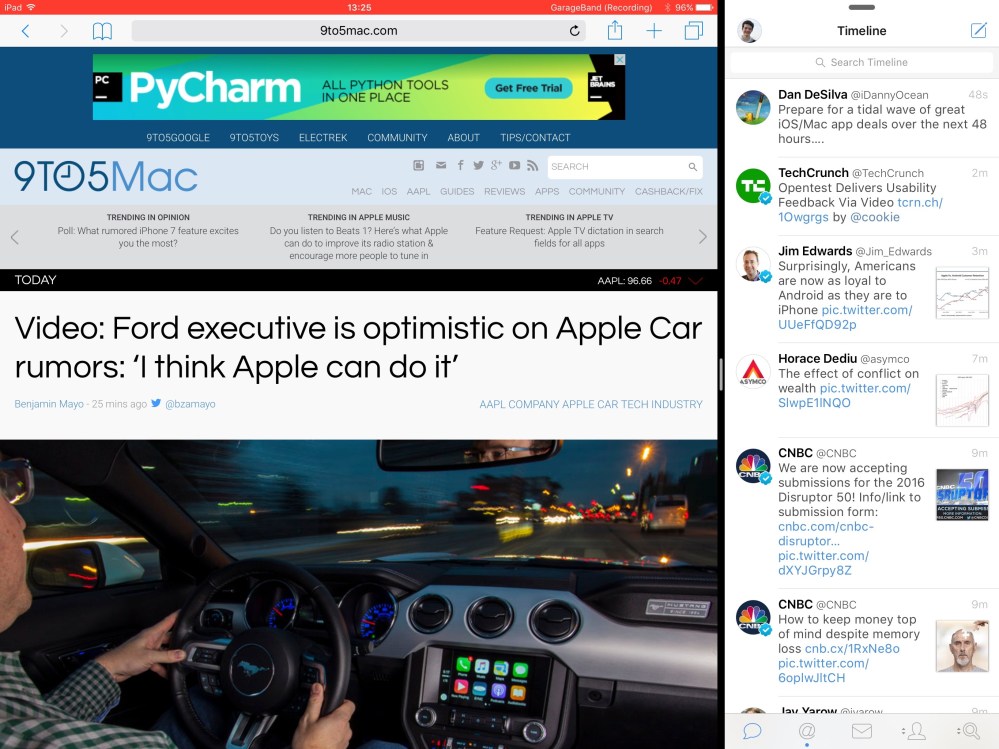 GarageBand also allows true music composition to take place, due to the ability to edit and compose tracks together. It’s a lot more comfortable using a physical hardware instead of the touchscreen to make tunes, in the same way that a physical typing keyboard is better to write documents than a soft on-screen keyboard. The biggest feature GarageBand has to enhance the iRig, though, is the ability to use GarageBand in the background. This works with MIDI instruments too. I have started casually playing tunes whilst watching Twitter or reading Safari on the iPad Pro. You can see the red ‘Recording’ banner in the screenshot above. To enable this feature, switch on the ‘Run in Background’ option in the GarageBand settings. It even works with the iPad ‘asleep’ and locked! The app receives the input from the keyboard and the notes keeps playing.

Sadly, a problem that plagues all three apps is the lack of iPad Pro support. All of the apps are upscaled from their 9.7 inch iPad counterparts, so look ugly and don’t take advantage of the additional screen real estate. Apple has demoed an iPad Pro optimized version of GarageBand at its events, but the app has yet to surface in the App Store. Hopefully, iRig also has software updates in the pipeline for its software.

In terms of issues, I have very few complaints. The shortcut function keys inscribed into the keyboard are nonsensical to me; without looking at the manual you wouldn’t know how to activate the VEL, KNOB or RESET functions.

Very occasionally, the keyboard would just stop working … inexplicably. Pressing keys did nothing. I couldn’t work out if this was a problem with the accessory, the app I was using or the iOS system. When this happened, I unplugged it from the iPad and replugged and the issue went away immediately. Still, it happened so infrequently, it isn’t really a problem. My guess is it software related, so perhaps future iOS versions will nail the stability for good. In general, I would also suggest that the product is slightly too expensive for what it is. Once you start hitting the $100 mark I would start to expect a more premium finish of the product.

I can’t say how much fun this product is. I don’t have any real instruments at home and having something reasonably portable to bash music on is hilarious. I’m now on the search for a good soundboard app that works with MIDI keyboards. For more professional use, it works great although maybe you should consider spending a bit more on the full-size version. Also, I really wish that iPad Pro GarageBand update would come out though with editing panes and instruments visible on screen at the same time. That will take this product to the next level.

The iRig Keys Mini costs $79. Its big brother sibling, the full size 37-key version, is available for $149. Find out more information on the IK Multimedia website.