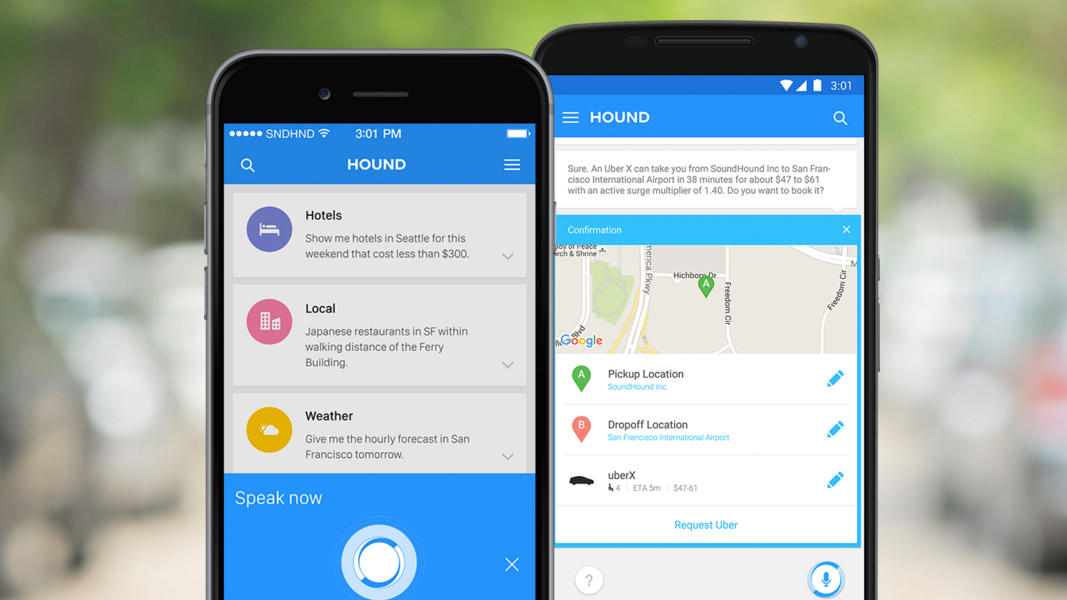 Hound, a voice search application from the creators behind SoundHound, has been released today for iOS. Hound’s application focuses on bringing users quick, accurate voice driven search results in a way I only wish Siri could. Implementing Google Now-style cards, Hound’s interface is direct and to the point. Users are presented with a list of similar topics they can search for, and even given examples of the complex queries Hound can handle.

Since Siri’s beginning, users have always wanted a little more out of the virtual assistant. Unfortunately, as time has progressed, the assistant has seen only small updates here and there to its usability and speed. With the recent desire and reports that Siri will move to the Mac, more and more companies are sprouting up to compete directly on iOS. While Siri may have beat out Google Now and Cortana in a user satisfaction survey, there is no doubt that these alternatives are looking to fill any gaps Siri may have.

Hound is Siri’s latest competitor. Hound’s UI is simplistic and reminiscent of Google Search‘s UI. A single button draws attention at the bottom-center of the view, inviting users to tap it and ask any questions they may have. Including an opt-out voice activation feature, users can jump into asking questions simply by proclaiming ‘Ok Hound’.

Hound delivers on a multitude of search results. Everything from weather, to hotel locations, and even nutritional facts. The granularity of otherwise intense inquiries is where Hound really shines. For example, a user can ask,”Show me Asian restaurants nearby, but not Korean or Japanese, that are open after 8PM.” Siri, asks what type of restaurant I would like, Japanese, Korean, or Asian. Hound shows me all nearby Asian restaurants excluding Korean, Japanese, and sushi bars. This subtle difference in inquiry and response makes Hound feel very much like the search/personal assistant I imagined Siri could be.

While I love the abilities that Hound possesses, it is quite difficult to get onboard using it instead of Siri. iOS doesn’t currently provide a way to set third-party apps as default in lieu of its own. This makes the experience of unlocking the device, finding the app, and then launching it a bit more cumbersome.

Our own Stephen Hall took an in-depth look at Hound’s original Android beta last June, and wrote about its first public release today. Although his video pits Google Now and Hound beta head to head on Android, the search results on iOS should match up similarly.

Hound is available for free in the App Store and is compatible with the iPhone and iPad.