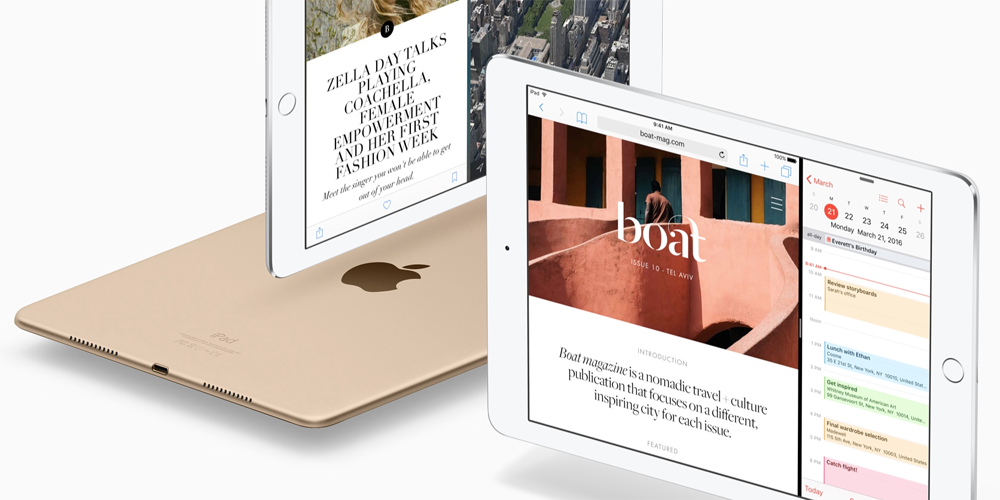 Reviews of the 9.7-inch iPad Pro are starting to appear – though there are a number of posts out there using that title which turn out to be a hands-on at the event rather than a full review.

Phil Schiller set a high bar when he said that one of the markets Apple was targeting included users of older Windows laptops. The 9.7-inch iPad Pro could, he said, be a viable replacement. The general view so far, however, is that while it’s an extremely nice device – more than one reviewer describing as the best iPad yet – it would be a stretch to consider it a full laptop replacement.

The True Tone screen, which adjusts the color temperature of the screen to match ambient lighting, got the most mixed reviews, some saying it made a huge difference, others not seeing it as a big deal. But the performance pleased everyone, as did the support for the Apple Pencil and Smart Keyboard in a format far more portable than its bigger brother, the 12.9-inch iPad Pro …

TechRadar only got a hands-on at the launch event to date, but said that in that time it felt it was looking at the future of the iPad range.

The 9.7-inch iPad Pro is probably a look at the future of iPad — it’s a manageable size, has an industry-leading display, and is a joy to create art on. That said, we wonder if it’ll truly attract Windows converts without running a full operating system. iOS only gets you so far […]

That said, it runs iOS like a champ. Performance simply wasn’t an issue as we whisked through apps, loaded up Procreate for iPad, and proceeded to get our doodle on. As you’d expect, given the A9X power plant, speed was right in line with what we saw in the original 12.9-inch iPad Pro.

PC Mag also just had a hands-on, but was particularly impressed by the difference the four-speaker system made – though didn’t see any other reason to upgrade.

The [difference from the Air 2] that really jumped out at me was the quad speakers. I fired up a scene from The Martian, and it really blared, even in a crowded room. Apple told me the Pro was twice as loud as the Air 2, and I believe it. Holding my finger next to one of the speakers, I could really feel it pushing air […]

But what’s the killer app that will cause people to upgrade their earlier iPads? Unless you’re into the creative pro apps that work with the Pencil, I’m still struggling to answer that question.

ArsTechnica did a detailed review and says it’s a no-brainer upgrade from the original iPad Air or earlier, not so much from the iPad Air 2 unless you really want Apple Pencil support – especially with the deals available on the Air 2.

If you have an iPad 2, the third- or fourth-generation Retina iPads, or the original iPad Air and you find yourself using your iPad more often than whatever other computer you have in your house, the iPad Pro is a no-brainer upgrade.

It’s fast and light, and its Apple Pencil and multitasking support make it a surprisingly capable computer if you don’t have some specific app or use case that demands a PC. If you have an iPad Air 2 and don’t desperately want Apple Pencil support, ignore the Pro for now. Buy a good Bluetooth keyboard case, and you can still enjoy all the multitasking capabilities and hardware keyboard features that the Pro has.

If you’re new to iPad, ask yourself whether you really want Apple Pencil support and make a decision from there.

Mashable disagreed, rating the device as ‘the best flagship iPad you can buy,’ maintaining the portability of the Air 2 while delivering significantly more.

There’s so much more power and utility in the new tablet that it’s hard to imagine why anyone would opt for an Air 2. And if you think the price is a reason, keep in mind that $100 more not only gets you double the storage space of the base model iPad Air 2, but it also significantly ramps up the processing power and gets you Apple’s best iSight camera with 4K video recording […]

Much as the 9.7-inch iPad Pro looks like the iPad Air 2, it takes all its power and performance cues from the larger 12.9-inch iPad Pro […]

The 9.7-inch iPad Pro introduces a much brighter (500 nits, as measured by Apple) screen that’s noticeable to the naked eye, reduced reflectivity that doesn’t kill reflectivity all together, a wider color gamut and True Tone

The Independent called it ‘the best iPad yet.’

The best iPad yet combines a stunning display, stonking audio and relentless processing power into a portable tablet […]

I’ve been using the new tablet for a week and it’s a pretty unqualified success, offering all the extra functionality of the 12.9-inch iPad Pro but at a lower weight and price point […]

In every case, turning True Tone off revealed that it looked more natural with it turned on again. Switch it off and you see, as if for the first time, that the tablet screen looks surprisingly blue in most lighting situations. True Tone is a quiet, but revelatory, effect.

Both the WSJ and Forbes tackle the question of whether Apple really can target Windows laptop users with this device. The WJS says some day, but not yet, and argues that the App Store is a disincentive to pro software, developers unwilling to give up a 30% cut on more expensive software and unhappy that they have no direct channel to pitch upgrades to their customers.

Forbes also says the iPad Pro isn’t there yet – large or small – but serves well as a ‘part-time laptop,’ with a Mac or PC available for the heavy lifting.

Check out too our hands-on video roundup from last week’s launch.