iPhone SE first impressions: Migrating from the iPhone 6s Plus is huge

My experience with using every iPhone and iPad screen size to date has taught me two things: one size does not fit all, and you can usually get used to using any screen size if you use it long enough. The tricky part is that it’s not super easy to know immediately which screen size is right for you, and using any one screen size for an extended period of time tends to make it feel normal.

iPhone displays were at first large by most standards at 3.5-inches diagonally in 2007; BlackBerry “smartphones” had tiny displays and large keyboards. Android handsets gradually raised the scope of what qualified as a phone, pressuring Apple to go bigger with the 4-inch iPhone 5 in 2012. Then even bigger and much bigger in 2014 with the iPhone 6 and iPhone 6 Plus.

I spent just a few days with the 5.5-inch iPhone 6 Plus before I decided I needed to exchange it for the 4.7-inch iPhone 6, but after a year with that screen size I decided to size up with the iPhone 6s Plus last September. The experience has been mostly okay as I really think we can all get used to any screen size (even 3.5-inch!), but extended use this go around has made the drawbacks for me very clear. More on that below, but as promised I’m venturing over to the 4-inch iPhone SE at least until the new iPhones come out in September. These are my day one observations after making the jump:

We’ve covered the spec differences between the various iPhones already and we have more comparisons on the way, so here I’ll focus instead on the experience insights versus what we can already compare on paper. Still, a lot of what comes to mind when changing from the iPhone 6s Plus to the iPhone SE does seem obvious, but other differences are less expected.

So in no certain order, here are my day one thoughts and observations… 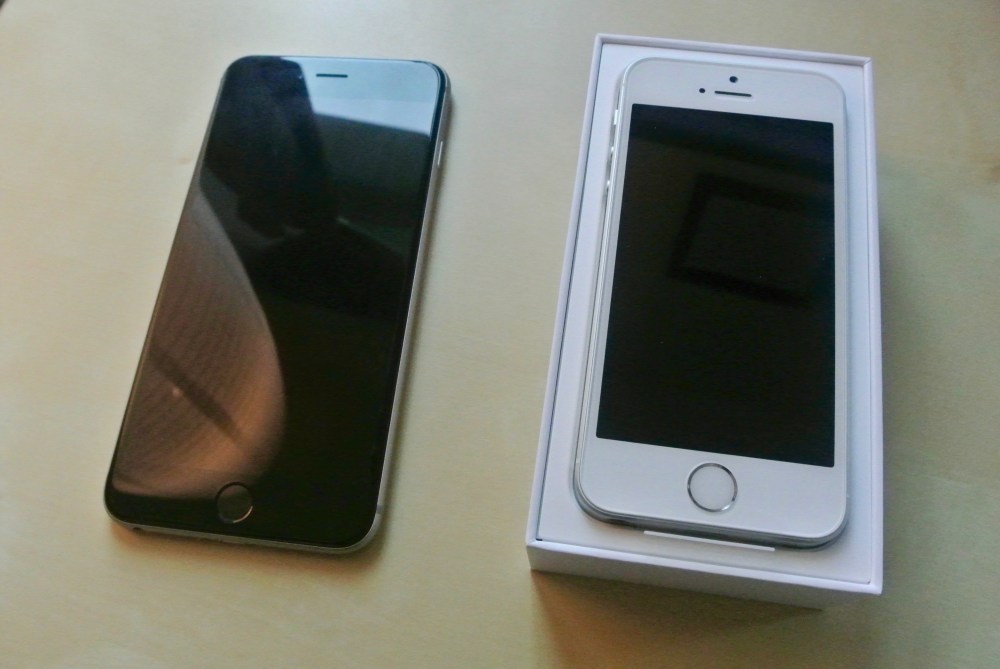 Okay, my very first thought was Wow, the iPhone 6s Plus is as big as the whole iPhone SE box. This is no massive revelation as I had the exact opposite experience less than two years ago when I upgraded from the iPhone 5s to the iPhone 6 Plus … but it’s definitely easy to forget how dramatic the size differences really are. 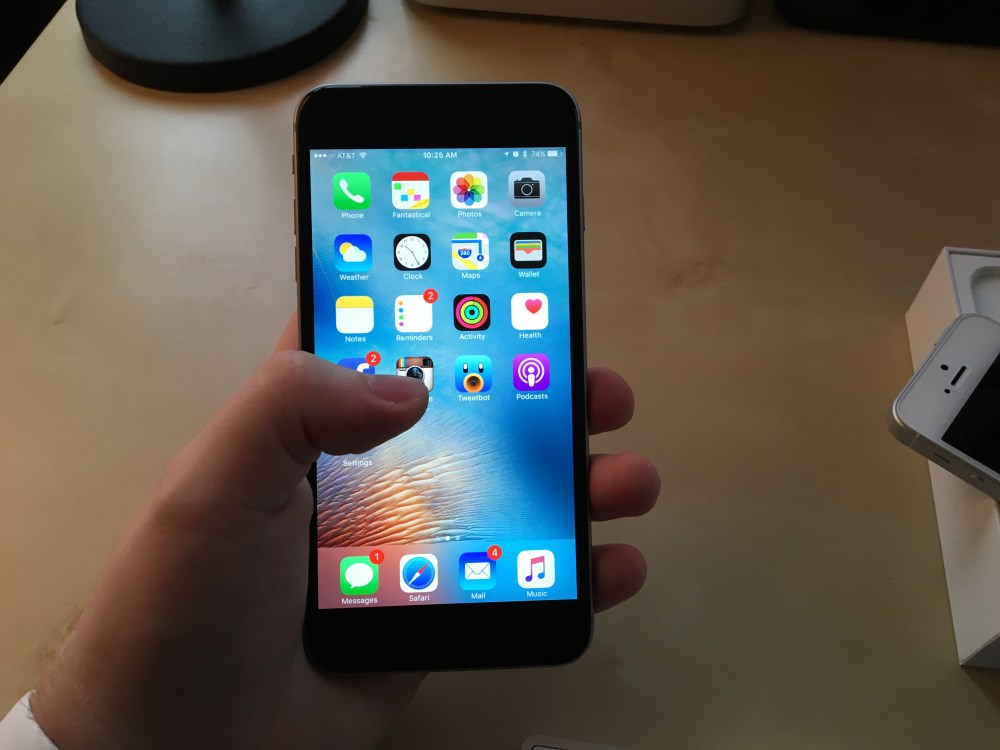 As for why I’m even bothering with the switch now and not waiting until September, it’s clear to me that Plus-sized iPhones are just outside of my comfort zone with one hand use. Reachability helps with the height, but I’m still not great at using the keyboard without two hands; reaching across the device is very tricky which makes changing between the alphanumeric keyboard and the emoji one a challenge. 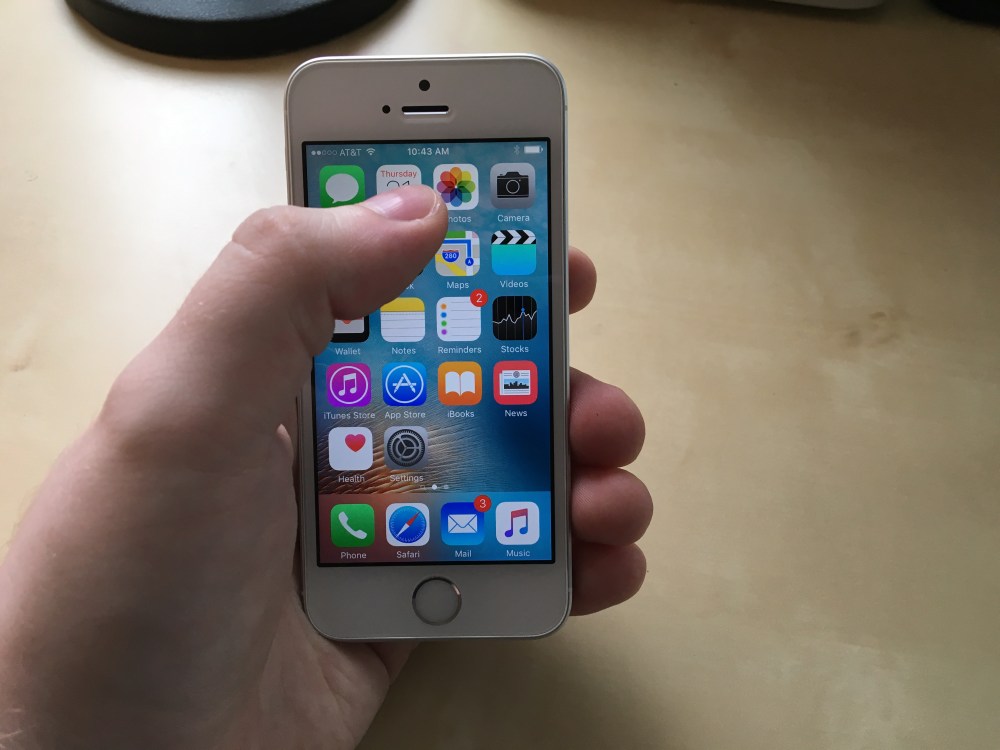 I probably have medium size hands, definitely not large (or small!), and the 4-inch display is easily reachable with either hand. Recalling my 4-7-inch iPhone use, the top left corner is usually out of reach when using my right hand, and vice versa. When using the iPhone 6s Plus, I also struggle with using the back gesture or reaching the back button when holding it in my right hand; I can easily reach the back button and don’t necessarily need the back gesture when using the iPhone SE. 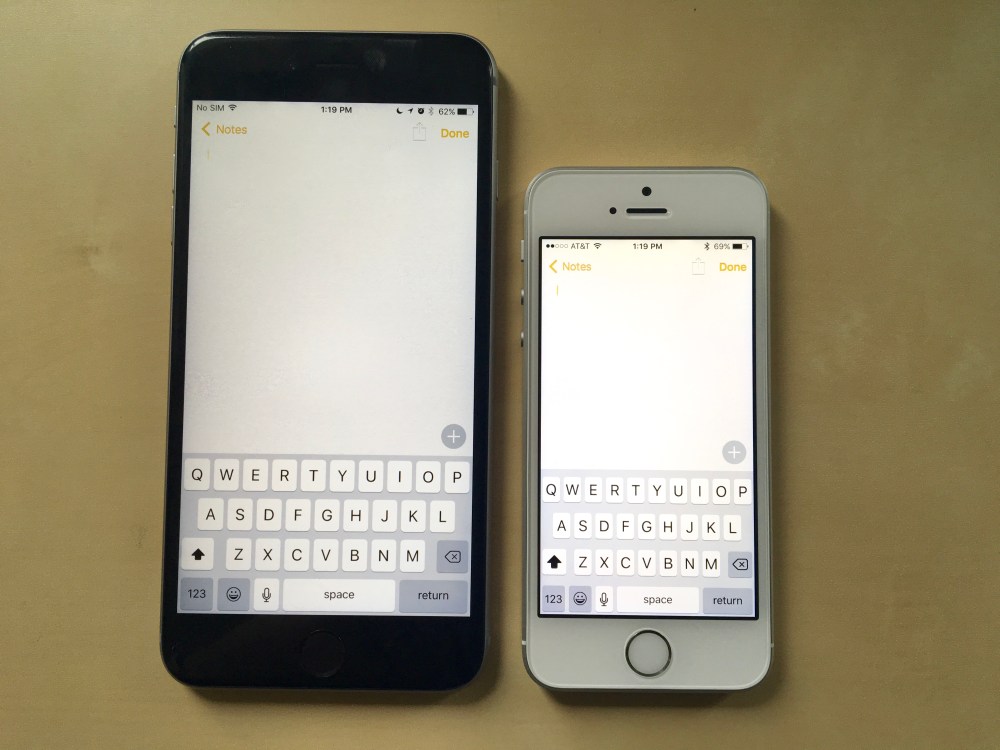 While the narrower keyboard on the iPhone SE is easier to use one-handed, the tap targets are also much smaller which requires a period of adjustment when switching between models. Plus-sized iPhones greatly improve typing accuracy for a lot of people, myself included, but at the cost of comfortable one hand use. iPhone SE keys feel very narrow for now — I felt my eyes physically adjust when I first saw it today — but I’m sure that feeling will pass. 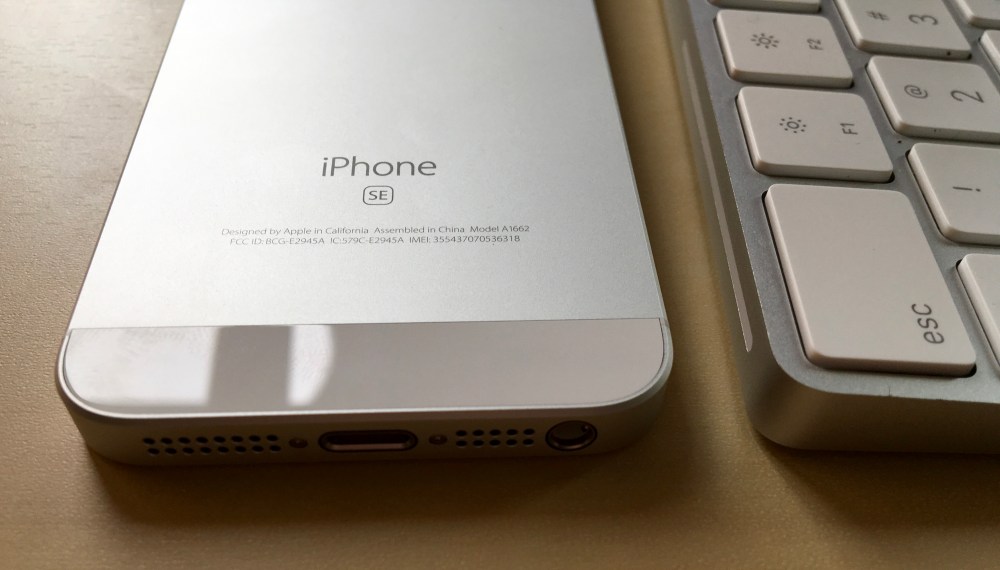 Just a small observation: the boxy design of the iPhone SE is very much like that of the Magic Keyboard which I use to type on my desktop Mac. The similarity is neat to notice, not a functional big deal, but neat nonetheless. 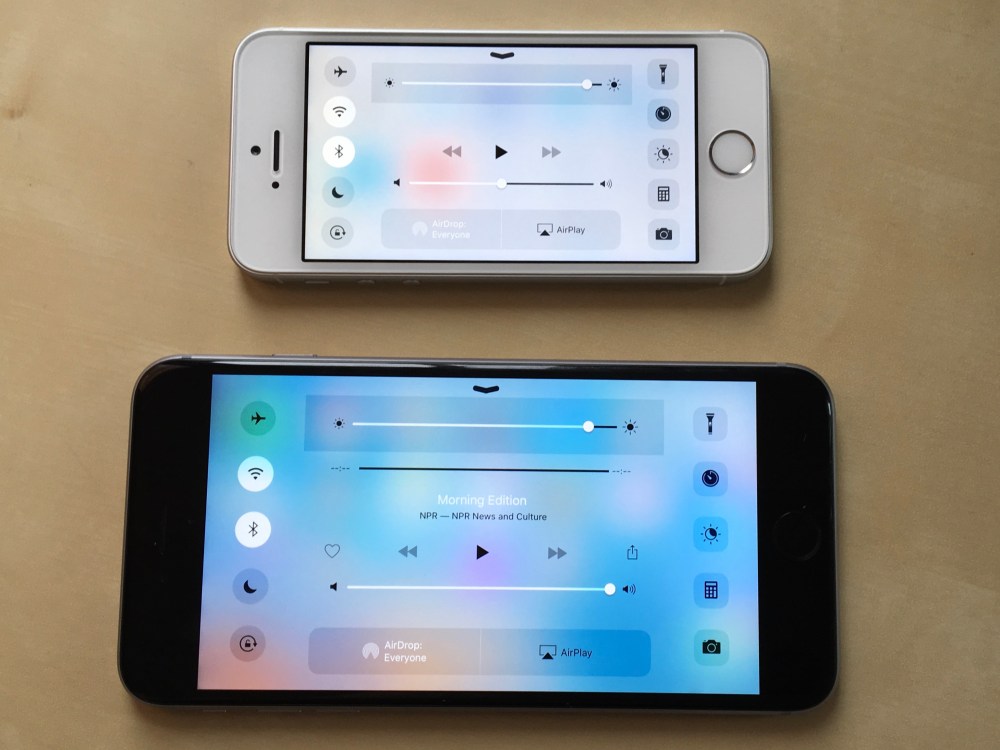 Now for the super obvious part but some thoughts to follow: a smaller display means iOS must be a lot more compact. That part we all could have guessed, but I’ve also decided that the medium-sized 4.7-inch iPhone is the design target for iOS while the 4-inch and 5.5-inch iPhones adjust in either direction. Stretch out more than the default, or squeeze in more than the default. That being said, I do believe the 4.7-inch iPhone is likely the go-to model for most people, before you consider screen size preferences, price, and other specs.

Elements like icons on the Home screen feel very compact on the iPhone SE, hiding much of the wallpaper behind it, and elements like the Share Sheet within Safari seem unnecessarily spaced apart. The Messages app shows noticeably very little conversation when the keyboard is engaged, especially with the Predictive text bar active. Tricks like turning off Predictive and lowering the text size may help. 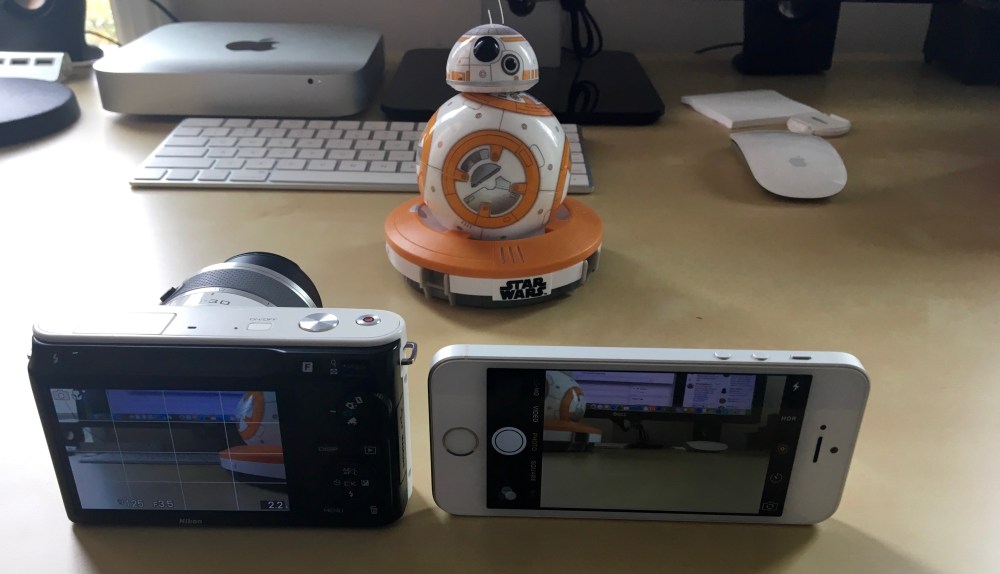 Another big change that will take some getting used to is just how small the iPhone SE display is as a view finder in the Camera app compared to the iPhone 6s Plus. The iPhone SE is actually about the same size as my camera, so it’s by no means impractical, but now that the iPad has a camera as good as the iPhone 6s and iPhone SE, I can see myself taking more photos around the house with it than my iPhone for the large view finder alone. 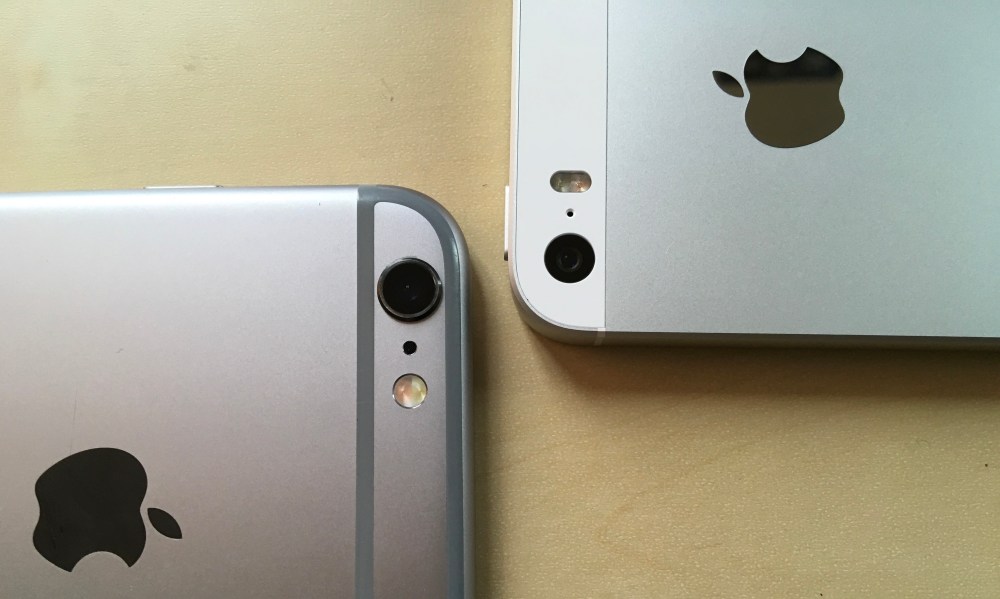 Now I consider myself in a rare camp of folks that don’t mind the iPhone camera bump, but it’s nice to have the same camera quality on the iPhone SE without compromising the design. What stands out more to me is the use of antenna lines on the iPhone 6 series; I much prefer the completed look of the iPhone SE in that regard.

I’ll be back with more thoughts on the jump from iPhone 6s Plus to iPhone SE after I spend some serious time with the device, but I’ll leave you with a few more observations. One unexpected effect of moving to a smaller iPhone: my Apple Watch display appears larger! It’s all relative… And when you use the iPhone SE long enough to make it warm, you noticeably feel that warmth in your hand. By comparison, the iPhone 6s Plus tends to get warm under heavy use as well, but toward the top which extends past my grip. 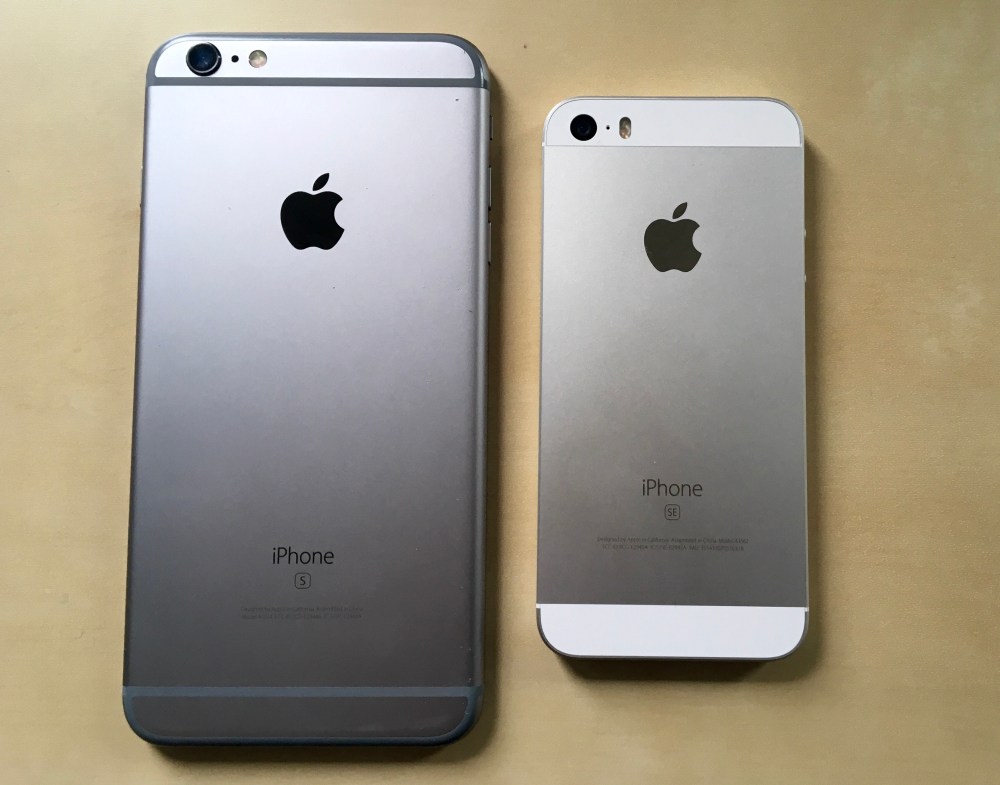 I’d describe my experience with the iPhone 6s Plus as feeling mostly normal with a few functional complaints due to its size. The iPhone SE still looks super small, not normal, but use it just long enough to set it up and personalize it and everything starts to feel normal again … and the iPhone 6s Plus once again screams phablet. I already miss the Taptic Engine as the iPhone SE’s vibration motor is just plain jarring, but routing most alerts to the Apple Watch helps here. I do wish iOS would undergo a serious rethinking that would make action buttons bottom-focused and not like what we have now: the same operating system on a 5.5-inch iPhone as we had on 3.5-inch iPhones.

After a few hours of use, I’m comfortable with the idea of using the iPhone SE for the next six months or so, but I don’t expect I’ll stick with it past September. The difference between the Plus and SE is huge, and the middle option is probably best for me and most people. We’ll see … stay tuned for more on my switch in the meantime, and shoot any questions my way if you’re curious about the switch yourself.