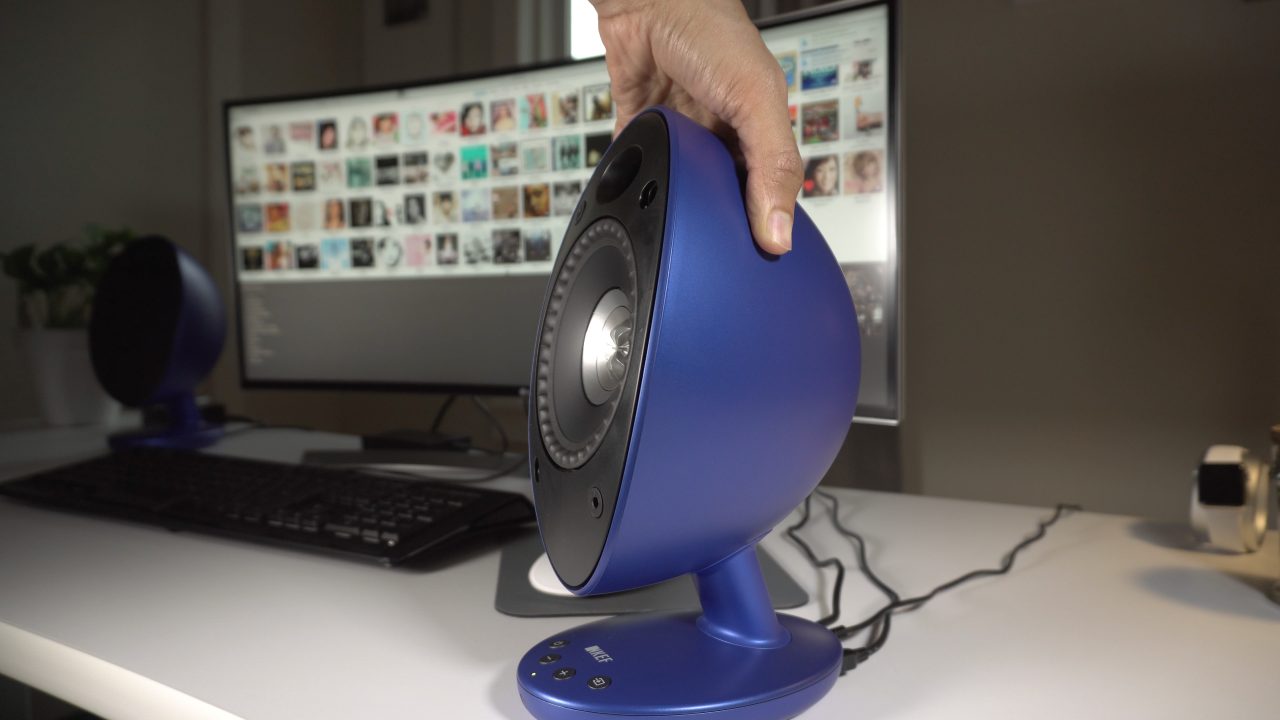 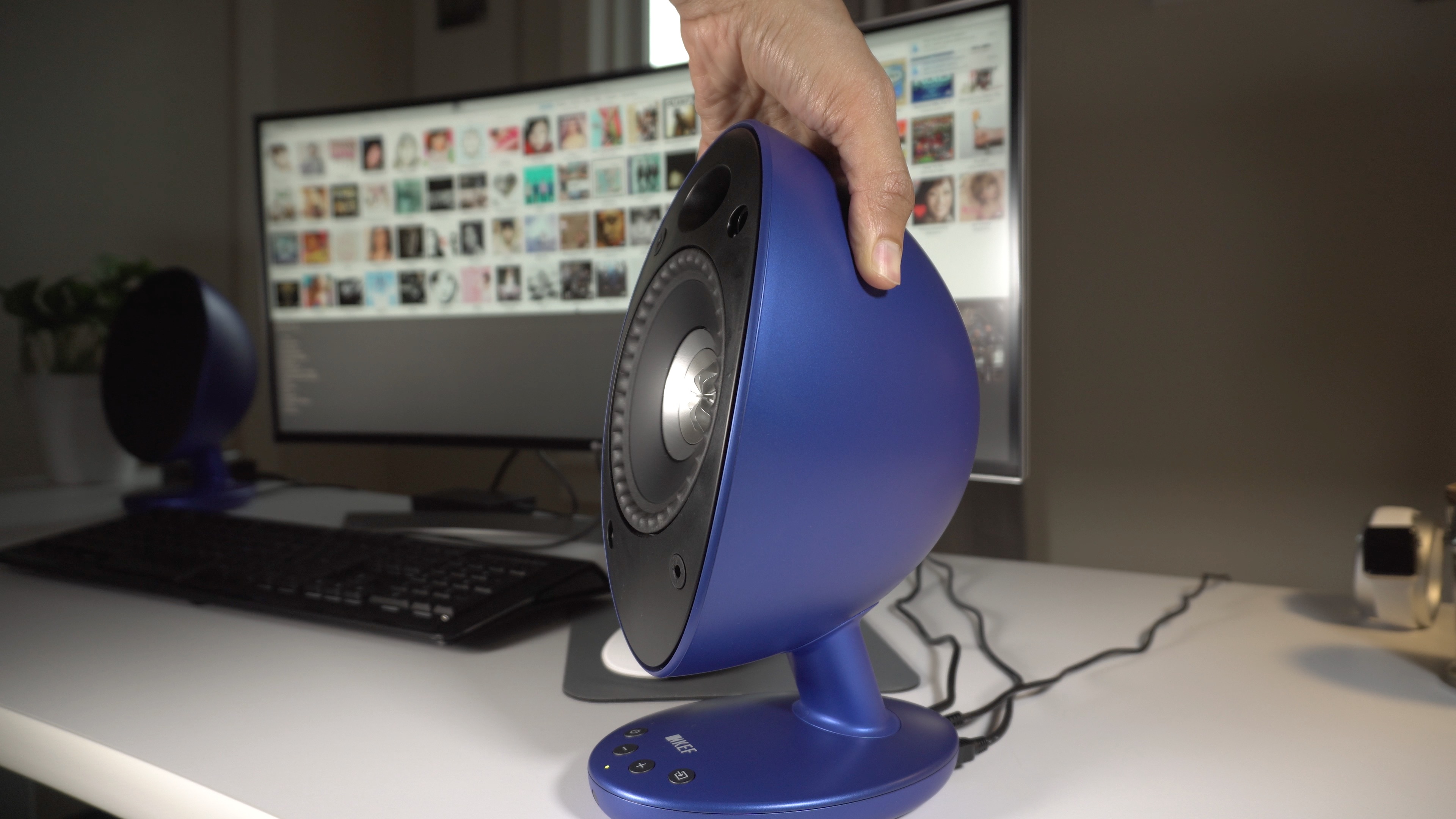 The KEF Egg digital wireless speaker system certainly lives up to its name. The shape of the speakers are a peculiar half-egg shape that make you question whether or not you should take them seriously.

A quick listen, and that question is answered with authority. Despite the peculiar look, these speakers mean business in the sound department.

Not only do these speakers sound good, but they also work well in a variety of different environments and with a variety of sources. KEF Egg is a Bluetooth speaker, a Hi-Fi USB speaker, and features traditional optical input as well. This means that the Egg works well in a bedroom, an office environment, or even in the living room.

At $499, these speakers are anything but cheap, but if you’re searching for a pair of flexible speakers possessing high-end sound, then the KEF Egg might be worth saving up for.

KEF is a British speaker company that produces high-end speakers and home theatre setups. I’ve never owned a pair of KEF speakers, primarily due to the fact that I, like a lot of people, tend to cheap out when it comes to sound. I’ll spend a lot on the visual aspect of my office or home theatre, but have no problem switching to budget mode when it comes to the audio gear.

After testing the KEF Egg for two weeks in my home office, it’s become clear to me that I’ve been missing out on all of the nuanced detail of the music that I enjoy.

Small details — symbols, hisses, groans — all of the little elements that tend to go unnoticed with cheap USB or Bluetooth speakers — I was able to hear in startling detail. Obviously this isn’t just a KEF thing, as this can apply to many hi-fidelity speaker setups that live up to their billing.

I opted to try out KEF’s Egg because two of my friends swear by these speakers. I also didn’t want another boring pair of speakers taking up space on my desk. I wanted something that looked unique, and the Egg has no problem living up to that description.

Although the KEF Egg may not look like it at first glance, these speakers are heavy objects that won’t be moved around on your desk without intentionally trying to do so. The speakers are made from plastic, but it’s a heavy duty high-quality plastic with a matte finish. 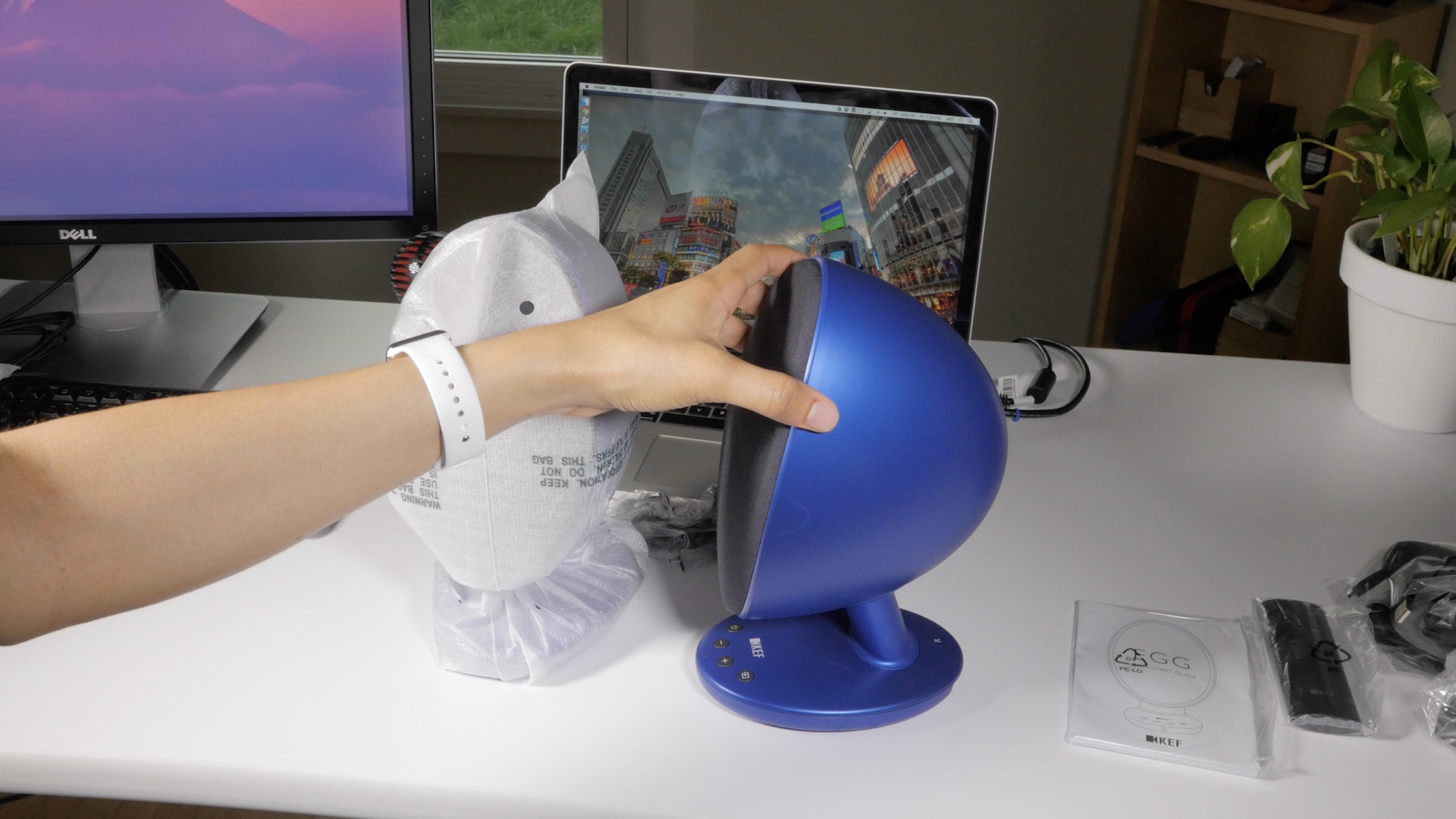 Although traditional white and black versions were available, I opted for the blue version. This helps an already unique design to stand out even more while sitting on my desk. 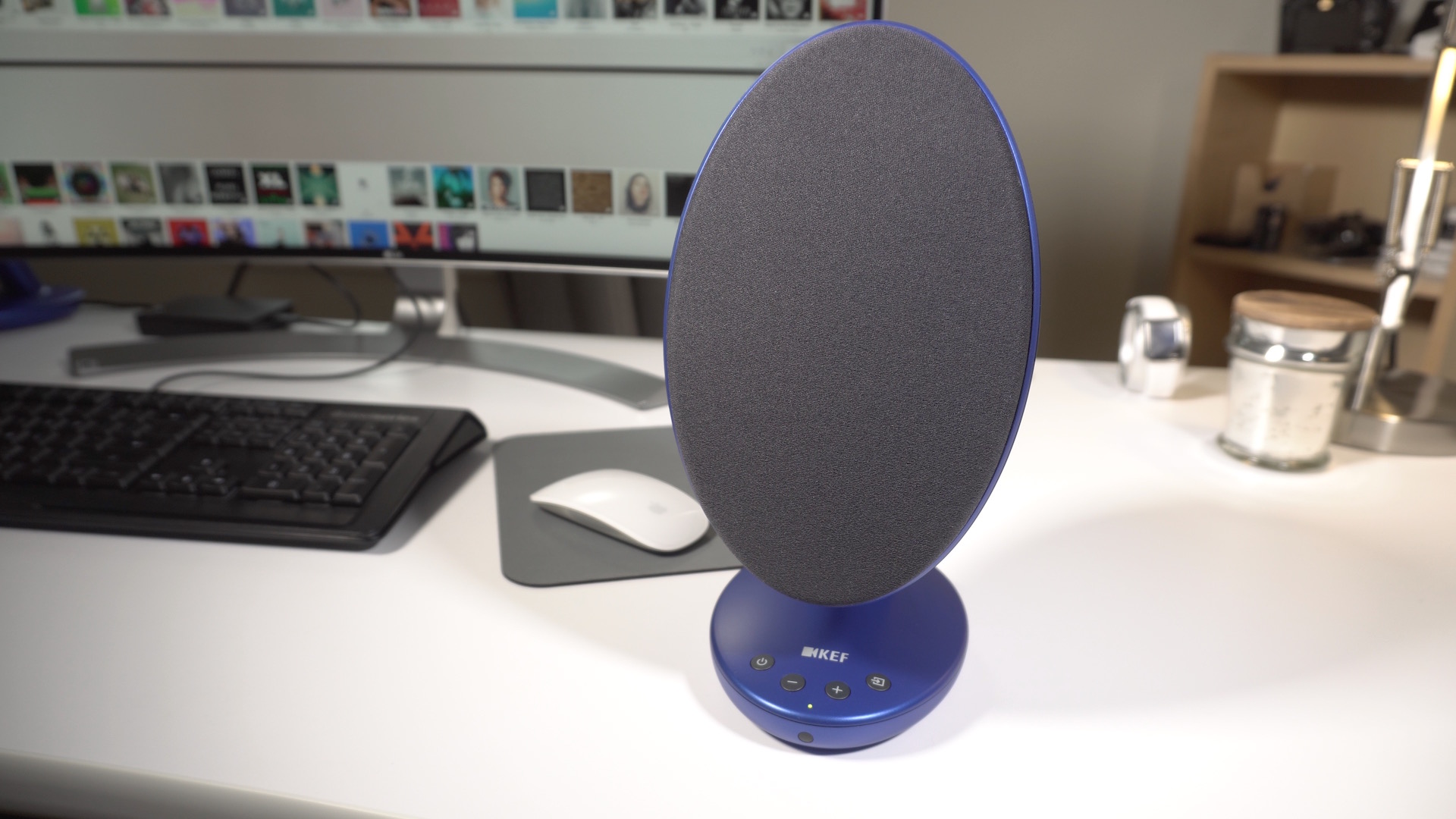 Along with the speakers themselves, the KEF Egg ships with a remote control and all of the cables necessary to get started. Included is a USB mini cable, power adapter and power brick, and a molex-styled connector to connect the master speaker, which contains all of the needed electronic components, with its pair.

Each speaker features a detachable grill that exposes the drivers. I much prefer the grill-on look, but a choice is available for those looking to go grill-less.

As I stated earlier, KEF has ensured that the Egg works with a bevy of different input options. There’s Bluetooth 4.1 for wireless connections, which work with both my MacBook Pro, my iPhone, and Android devices. You’ll also get an optical connection that’s geared toward connecting televisions, and the preferred USB connection, which supports 24-bit audio.

Hidden under a cover on the side of the speaker’s side is an auxiliary input for a 3.5mm adapter. KEF doesn’t ship the EGG with an auxiliary cable, so that indicates the low priority that it’s placing on such a connection. 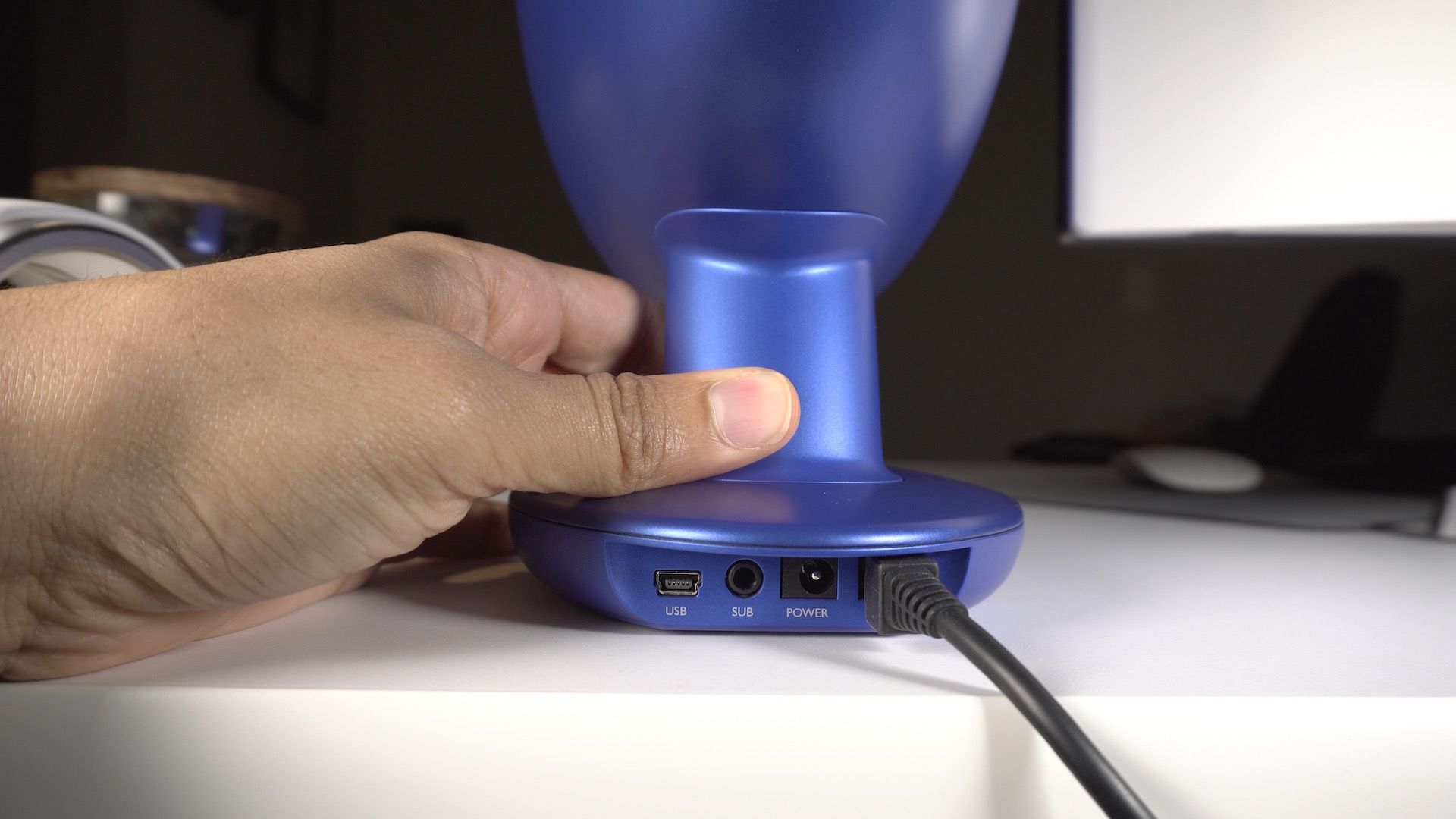 Having Bluetooth is great for flexibility, but if you can, I recommend connecting the Egg to your computer via the included USB cable. The USB connection takes advantage of the 24/96KHz DAC for that super clean and crisp sound. I tested out a few lossless Flac-encoded tracks, and as you’d expect, it sounded wonderful.

For those of you who prefer a little more on the low end, the Egg features a subwoofer output on the main unit. I’m a big fan of bass, but for the time being, I’m satisfied with the mid and high range sound afforded by the stereo setup.

The EGG’s master speaker, which includes the 24-bit/96kHz high-resolution DAC and built-in amp, features volume controls, a power button, and an input selector button on its base. Once you have everything connected, it’s just a matter of cycling through the input options until you land on the desired method of sound delivery. The LED light on the base of the master speaker lights up with a specific color to denote the type of input the speaker is currently using.

You’ll also find an IR sensor on the master speaker, which works with the included remote control. Although the remote control certainly beats many of the remotes that ship with electronics these days, I wasn’t very impressed with its texture — it’s almost like rubbing extra-fine grit sandpaper. It’s well designed, but I found its texture to be irritating.

When I think of Bluetooth, I normally think of the convenience afforded by being untethered from wires. At the same time, I also think about low quality sound, because the lack of bandwidth usually leads to noticeably inferior sound quality when compared to a wired connection. KEF attempts to solve the Bluetooth fidelity issue by equipping its speaker with the aptX audio coding algorithm. aptX reduces the bit rate of audio streams, making room for the necessary bandwidth needed to stream over Bluetooth.

Although aptX claims to make music streamed over Bluetooth sound better, both products — the speaker and the input — need to support aptX. Ultimately, for the best sound quality, you’re still going to want to connect directly to the Egg in order to hear your high-quality music in its best form.

I wouldn’t call myself an audiophile, not in the least. A true audiophile would have never went for years listening to music through a cheap Bluetooth speaker, or the free pair of EarPods that you get with every iPhone.

I’m nowhere near an audiophile, but it’s not difficult to tell really great sound from really average to low end sound. The KEF Egg sounds ridiculously good, it’s just unfortunate that there’s no real way to let you hear the difference it makes via a video or something of the sort. 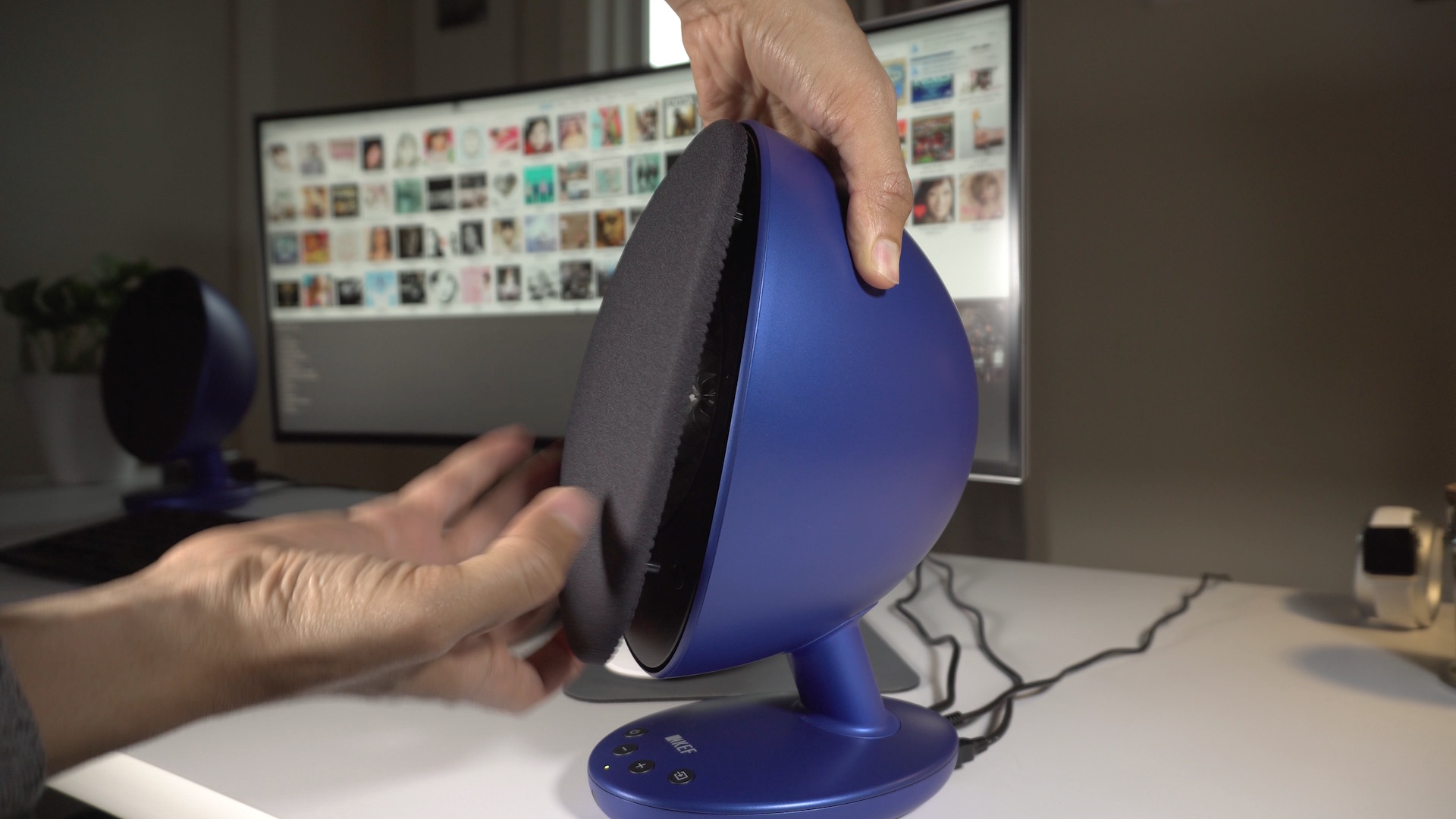 The best way that I can describe it is that it feels like the music is separated ever so slightly into the various sounds that make up a song. On my earbuds and old Bluetooth speakers, it was much more difficult for my ears to separate and discern individual sounds. Music still sounds like a cohesive production on the KEF Egg; it’s just that I can now hear all of the subtle details that make up a song. 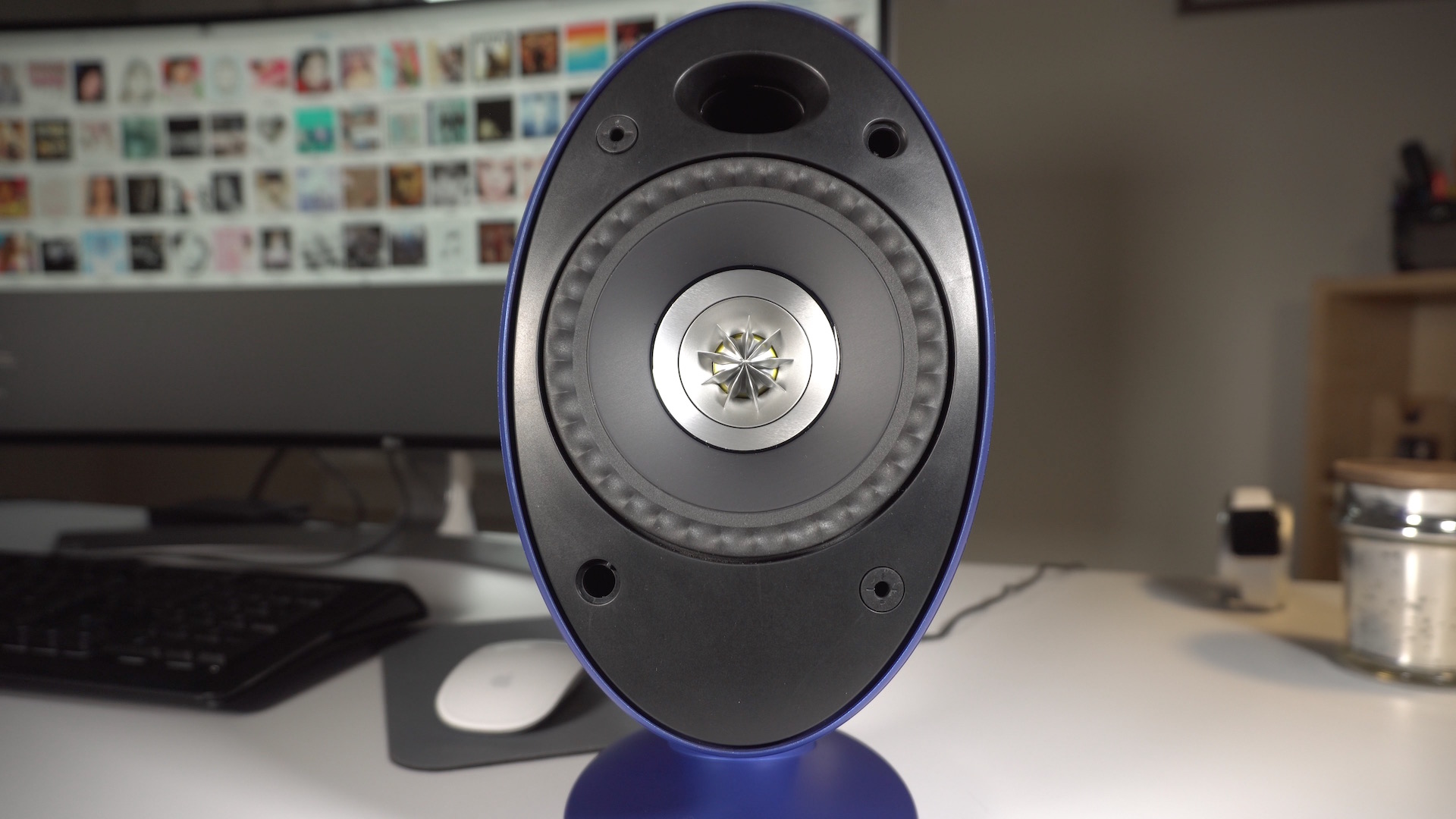 What is it that gives the KEF Egg its sound? That responsibility primarily rests on its Uni-Q point source driver array, a KEF staple. There’s a lot of technical details that go into the design of the driver, but the idea is that all of the sound, the mids and highs, come from the same point in space. To achieve this, KEF engineers place the tweeter, which is responsible for the highs, directly in the middle of the driver for the mids. This creates a stereo sound that’s more accurate, even if you aren’t sitting in the so-called “sweet spot” (middle) of the speaker’s firing range.

Technical details aside, I can personally attest that these speakers live up to the high expectations. They even sound good when I’m off to the side, or standing up or sitting down. 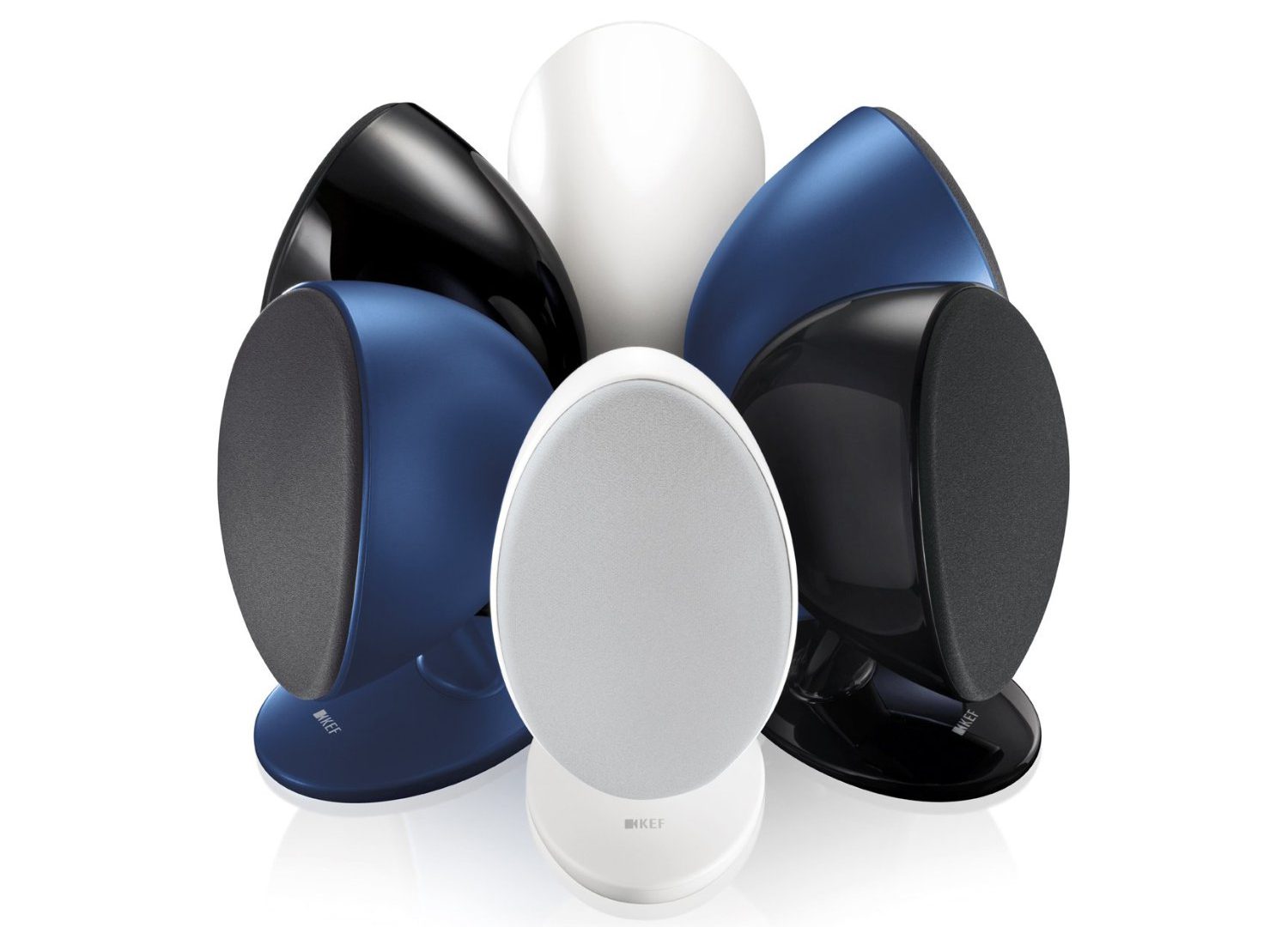 KEF’s Egg is available in Black, Blue and White colors

Not only does the KEF Egg sound good, but it looks good as well. The style won’t resonate with everyone, but I believe there are those that will appreciate the color options and original design. 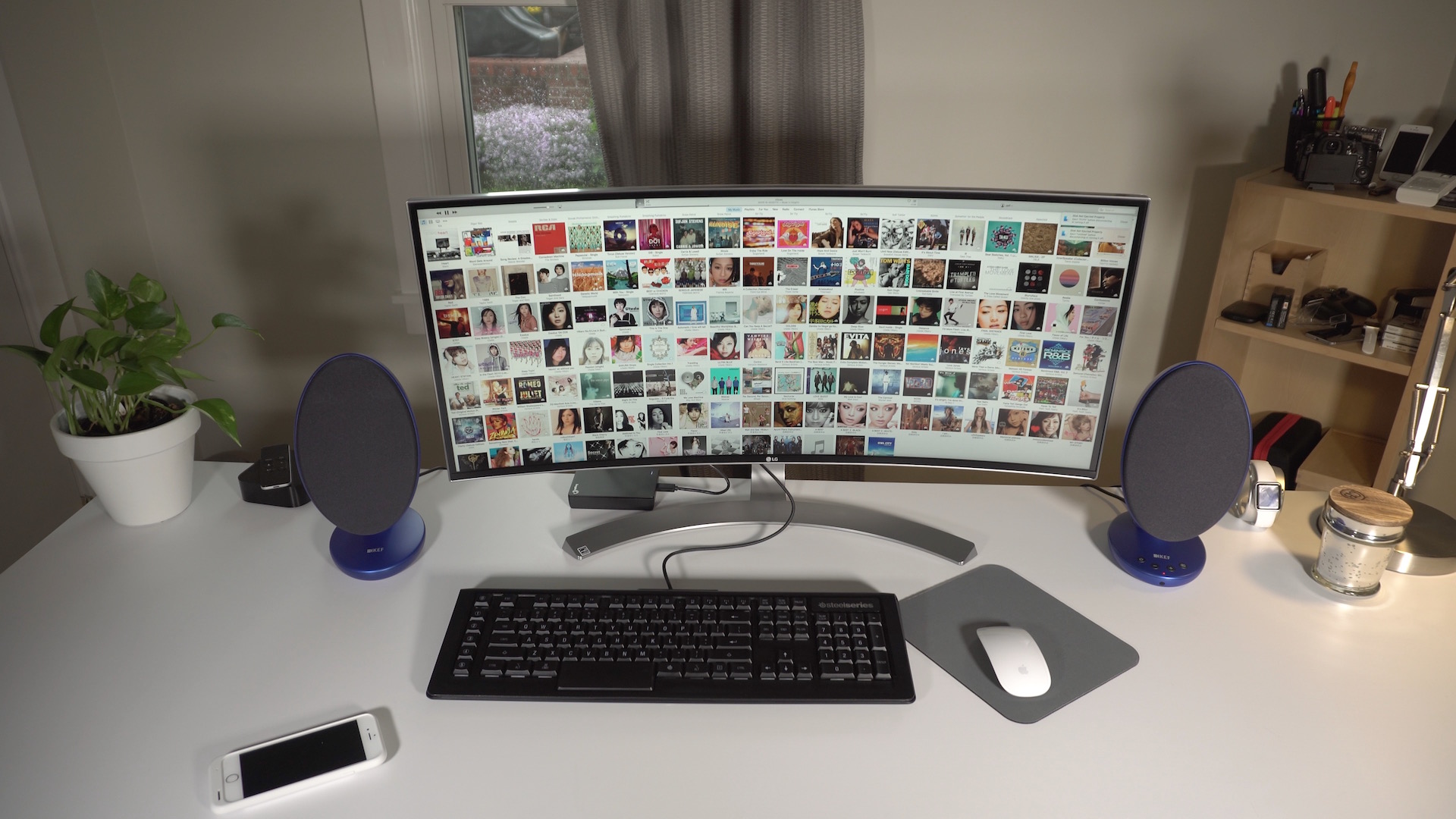 The KEF Egg is by far the best speaker that’s ever been in my house. That’s not saying much considering what I’ve been using over the years, but it’s noticeably better than anything I’ve ever used for home audio in the past.

Yes, these speakers are crazy expensive at $499, so they should sound incredible. Thankfully, they do.